The Eurobike 2016 show floor just keeps on giving, so let’s get looking, but please keep the drool to yourselves… Here’s the latest cycling apparel from Castelli, powermeters from Quarq, and an all new bike from Sandwich.

CASTELLI Clothing
If you’ve been reading PEZ from the beginning, you might remember when the Castelli brand was languishing in the “where are the now file”.  But thanks to new ownership a few years back, and a big-ass commitment to making the brand great again, if you’ve only joined PEZ as a reader in the last 5-6 years, you’ll know Castelli as a market leader in top end race & technical riding gear, driven by their collaborations with their sponsored pro teams and product designers who simply want to make the best riding gear around.

While some other clothing brands simply trot out last year’s wares in a different color, Castelli always shows up with brand new items to bolster an already huge range of products.  Such as… 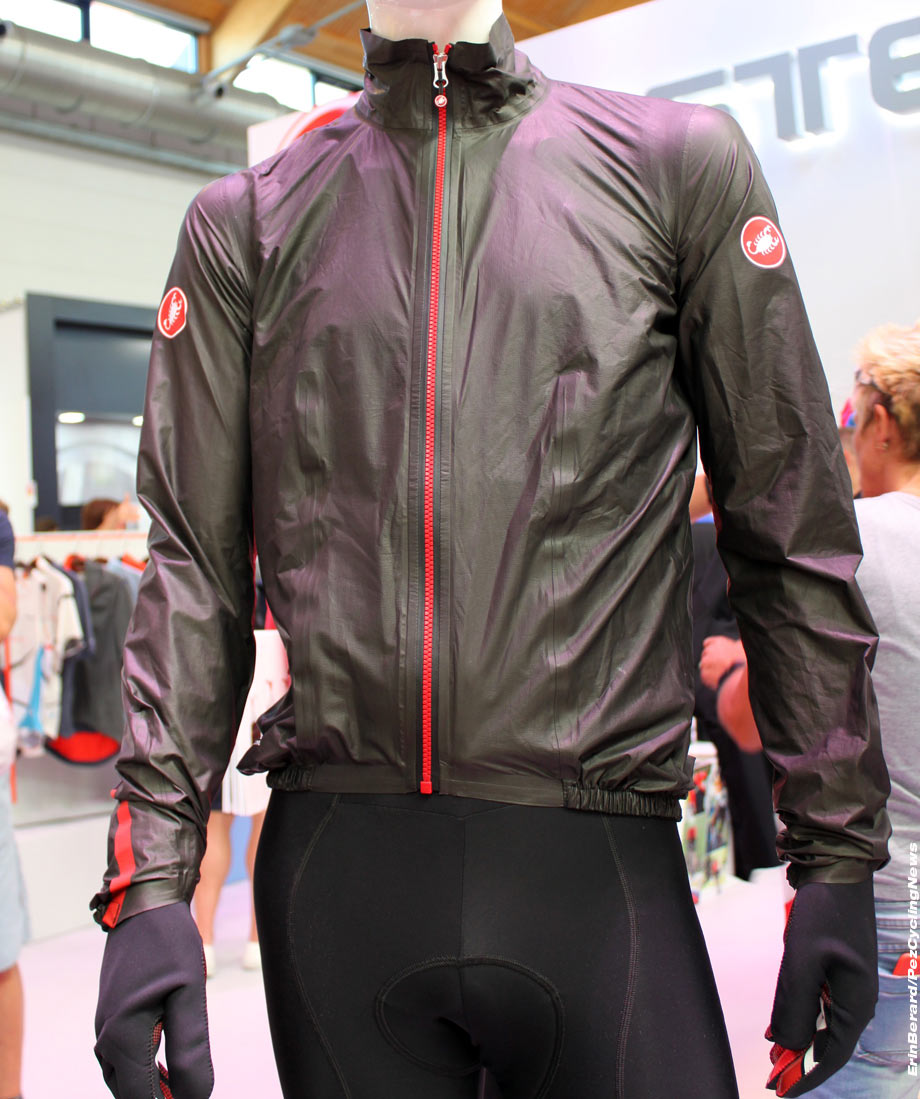 The Idro jacket answers the question of what to wear when you’re choosing between something small and lightweight, vs something to offer the best protection if Mother Nature’s in a mood.  Castelli has chosen Gore-Tex Shakedry fabric, and cut & sewn it into the “lightest and most compact Castelli Gore-Tex jacket ever.”

Shakedry uses just two layers to keep wind and rain out, while still allowing body heat and perspiration to escape (that hallmark of Gore-Tex fabrics).  The seams are taped so nothing wet or windy gets through, and Castelli has tailored it to fit sleek and small – unlike so many rain jackets offered by less technical brands.

Best of all, it’ll fold up so small you’ll have room to spare in a jersey pocket, and weighing just 123grams, you’ll forget it’s there… that is until the wind and the rain start up. 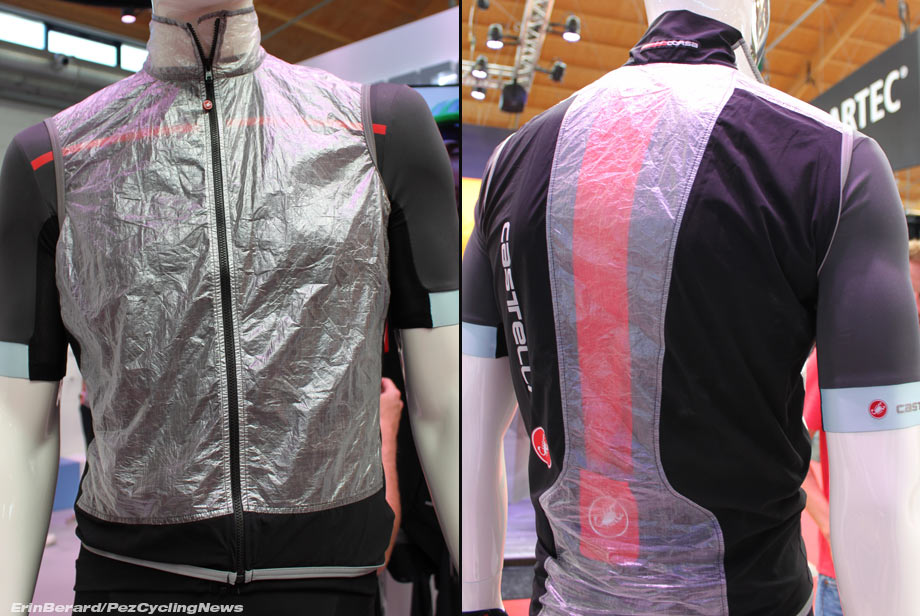 The Vela Vest looks to be the lightweight vest designed just for guys who love lightweight vests. The front and centre panel on the back are made from Dyneema® Sailcloth, which as the name suggests comes from the sailing industry, which demands very light weights, very high tensile strengths, and durability. Breathability is improved with two large stretch woven fabric panels on the left and right of the back, and Castelli adds in their DWR fabric treatment for water resistance. The whole thing folds into a pouch that’ll fit in the palm of your hand – weighing just 59grams. 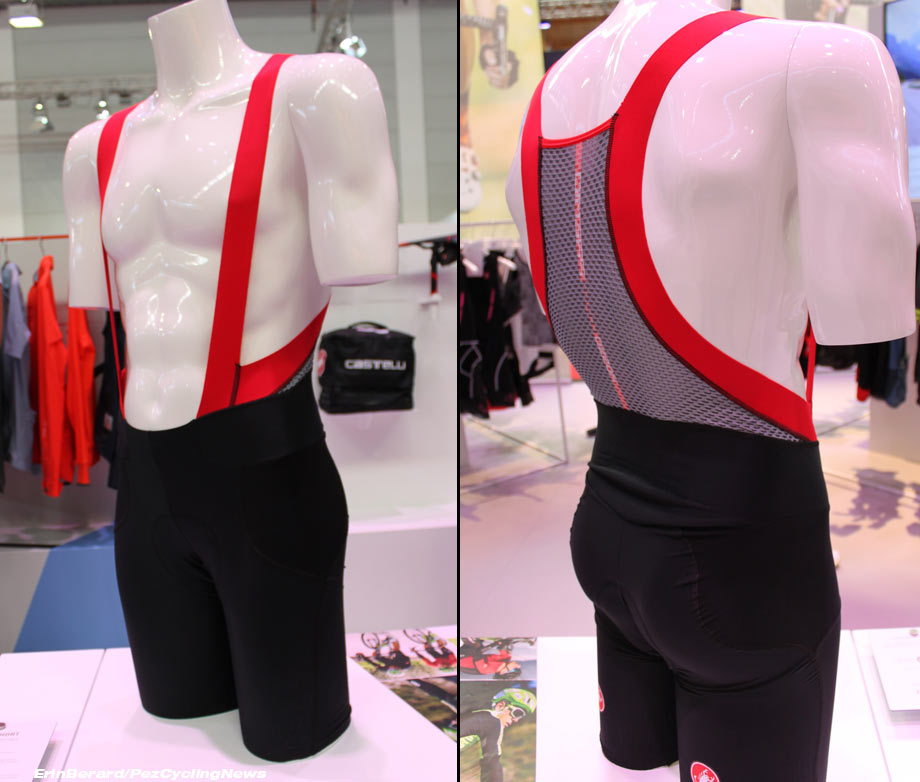 The Premio bibshort is aimed a guys who like the long hours in the saddle, but want to avoid that certain feeling that spending long hours in the saddle so often brings – you know what I’m talking about.  But unlike so much of Castelli’s race-bred kit, this one is less about “less” (as in material and weight), and more about comfort.  They’ve used a higher compression fabric through the main body and legs to hold you together better, sewn in their most comfortable Progetto X2 chamois (with its seamless pad), and added their lazer cut seamless straps with full mesh back for maximum breathability and comfort.  Traditional leg grippers have been replaced with a vertically ribbed fabric through the legs that hold them in place. 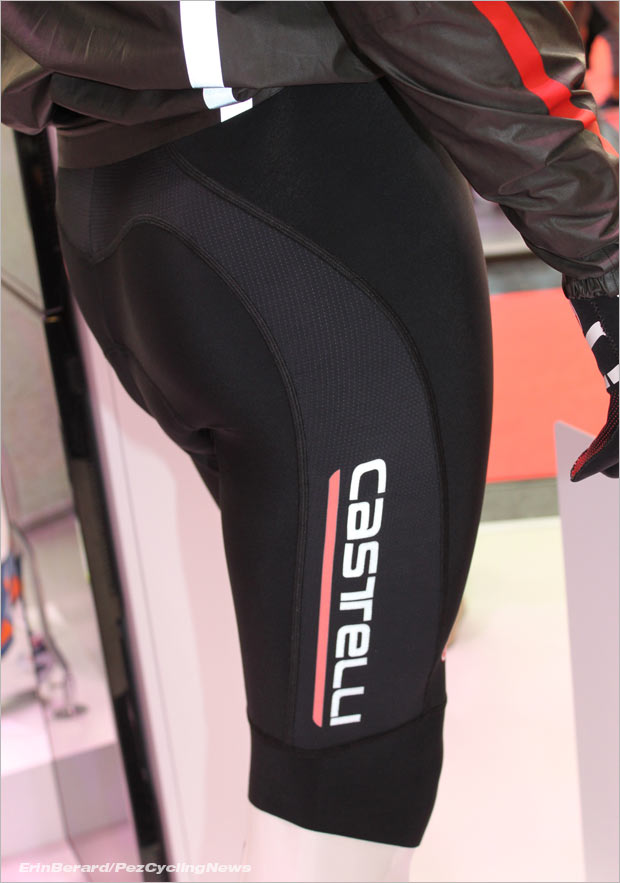 Although technically a make-over of their bibshort by the same name, the Omloop Thermal Bibshort could easily get an all new moniker given its big differences over last year’s model.  It’s designed for cool to cold days – the kind inspired by Belgian weather, and made of a warm fleecy material called Thermoflex that feels soft and warm against the skin. The legs are cut longer than regular bibs – long enough to cover your knees (but maybe shorter than using full knee warmers) – and the over the knee part is shaped to not bunch or ride up.  The rise is slightly lower and the straps placed wider to allow freedom through the chest and to avoid over heating.  Seams are flatlock (the best if you ask me), and they’ve wisely gone with the Progetto X2 Air seat pad – also their best… if you ask me.

QUARQ POWERMETERS
As training season rolls around, it’s time to think about power and naturally we found ourselves in front of an enticing case of the newest Quarq goodies, all designed to keep us honest and riding smart and fast…We caught up with Quarq Product Manager Troy Hoskin, who walked us through the new DZero simplified yet next-generation power meter platform, named for the DZero Experiment, one of science’s most accurate and innovative projects to detect subatomic particles moving at the speed of light. Troy explained how he has been with Quarq for many years, even before they joined the SRAM family, so we knew we were in the right hands. 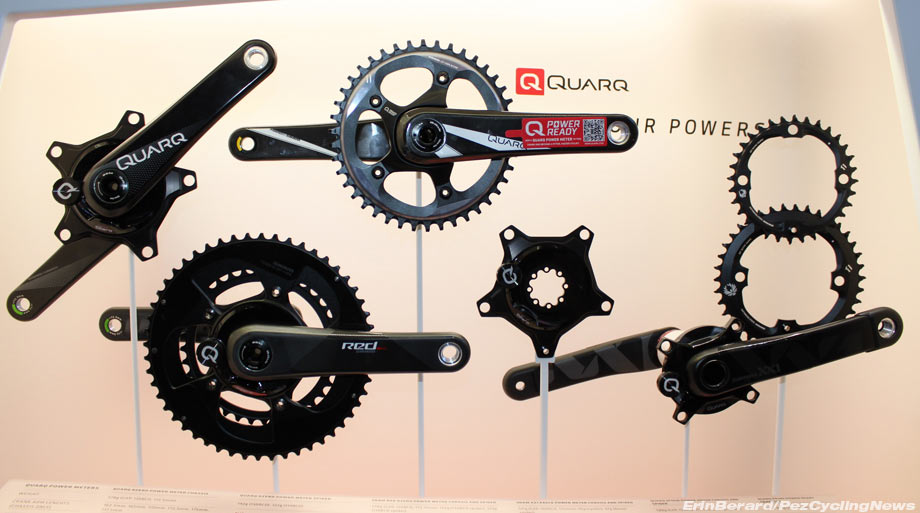 Whereas previously Quarq offered two models Riken and Elsa, there was enough overlap between the two that it was often difficult to choose between them. Now, instead of these two, there is one DZero, so choosing is easy. Additionally, Troy explained how DZero now offers a new measurement circuit and a revised strain gauge design, to deliver improved accuracy throughout the pedal stroke.

I kept touching the power meters which caused them to bounce on their display stands. Troy would smile patiently, stop them bouncing, and continue talking.  This went on for a while longer… talk about a kid in a candy store.

DZero offers universal application for traditional 10- and 11-speed chainrings. You can choose from exogram carbon or forged aluminum crank arms, a hidden or non-hidden bolt spider, and for standard or compact.

Then he showed me the special SRAM Red DZero model. This uses the same DZero technology but integrated into the Red crank with Red branding. For all of you out there who are “uptight” about such things, this is for you. The SRAM Red DZero model will ship with exogram carbon crank arms, a hidden bolt spider, also for standard or compact.

Troy also pointed out that DZero power meters will still offer features which made it famous in the first place, such as 10K temperature compensation, easy battery replacement, OmniCal (change chainrings without affecting accuracy), AxCad (accelerometer cadence with no magnet), and an IPX7 waterproof rating.  Software advances built into the Qalvin App include compatibility with BLE and ANT+.

Other good news for riders new to power is the launch of Quarq Prime. This is a program between Quarq and Canyon, Felt, Fuji, Trek, among other original equipment bike manufacturers, whereby they may build bikes with Quarq Prime “Power Ready” Cranksets that can be easily upgraded at a future date with the addition of a Quarq DZero power meter spider. Once again, we are seeing the industry embrace product versatility to deliver pro level technology accessible to more riders. This is a great option, especially since these “Power Ready” cranksets are based on the already proven and popular SRAM Force and Rival crank designs.

Quarq DZero and SRAM Red DZero power meters will be available September 15, each priced at $1079.

SANDWICH BIKES
Among the thousands of bikes on display this week in Germany across road, MTB, cyclo-cross, urban, e-bikes, I came across something so unusual yet innovative it stopped me in my tracks. If I could award the “Most Euro” award at Eurobike, this would be it.

I happened upon a Dutch design company making bikes inspired by the concept of flat packing, home assembly, à la IKEA. Named the Sandwichbike, this is a bike you build yourself from two weather coated frames of layered plywood (German birch) bonded together by ‘smart cylinders’. Everything you need is in the box including the tools, so you can start assembling right away. In total, there are less than 50 parts. 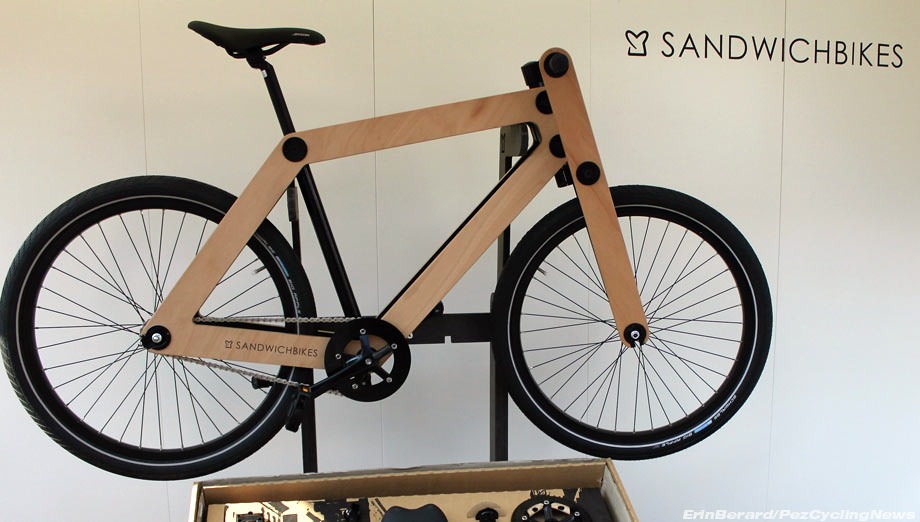 The idea started in 2006 at the International Bicycle Design Competition in Taiwan with the challenge to re-examine the materials, manufacturing and distribution of the everyday bike. Today they offer 5 models including wooden forks and steel forks in two sizes and a fully customized model. 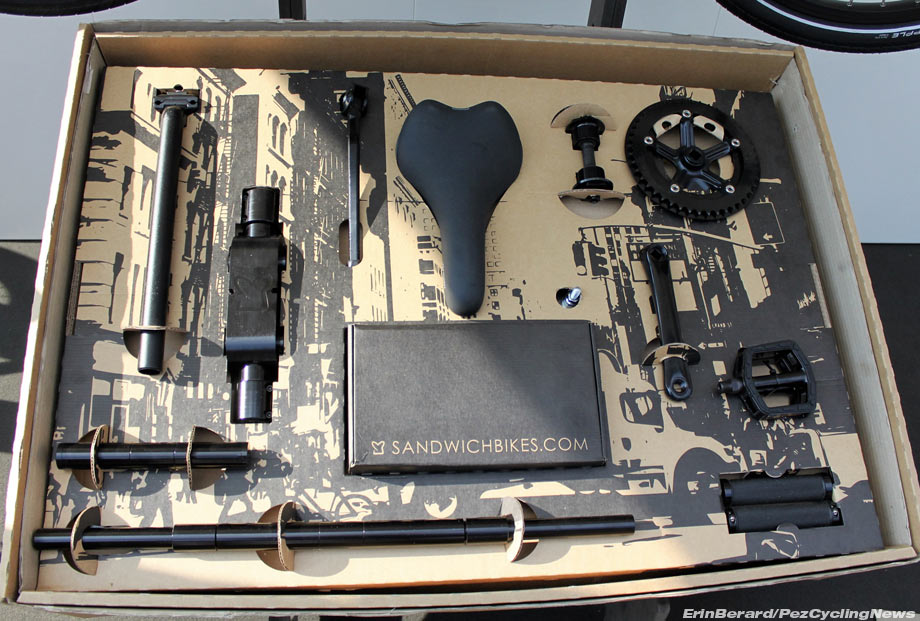