I did a blurb on the FSA guys a little while back (read it here) just because there stuff was so cool. So many Pro teams were starting to use their stuff, that I couldn’t ignore an opportunity to be a pain in the ass and stop in and bug them in their Washington Corporate offices (and it wasn’t raining!). Now I know why people have replaced “Who’s FSA?” with “when will FSA’s new [bars, wheels, seatpost, stem, compact cranks…] be ready?” after testing the K force bars and post and OS 115 stem.

And, of course, Colnago’s new Mix frame was here for testing and just happened to be a perfect color match in red white and black. That test gets posted later this week. 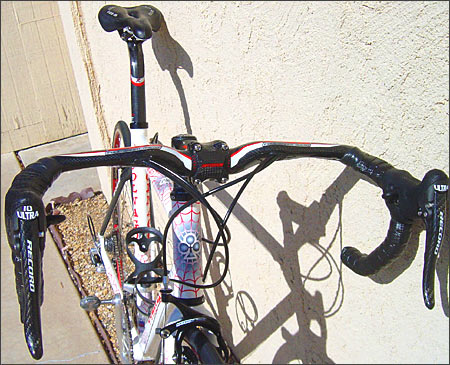 K Force Seat Post
The first thing out of the box was the K force seat post. It was also the first thing back in a box, because Colnago decided to give the new Mix a stiffer Bottom Bracket by using an oversized Seat tube requiring a 31.6 post. Not to worry though, as its replacement showed up PDQ. 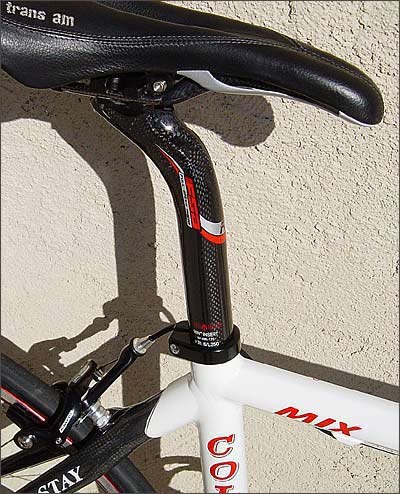 The Seat post it’s self is like all of the parts in the line, simple clear coat carbon fiber, with one small Logo and easy to read “Minimum depth” markers (shown for your convenience…). I like that they don’t paint over the complicated sections like some other folks that need to hide their work. FSA can make shapes and turn corners without screwing up the top fiber matte (then needing to hide it…)

The best part about the post (if you are me) is the set back. Bike manufacturers (and most good fitting guys) have finally realized that the overly dropped position on a bike (bars way lower than your saddle), suggested by the old guard, is not the most efficient position for almost anybody. Some pro’s and super flexible folks ride that way, but most folks shouldn’t be that low in the front. Bicycle manufacturers are making larger (taller) head tubes now, and that is allowing folks to find a more comfortable position. It’s also rotating people up and back a little and, while Manufacturers are increasing head tub size, Seat tube angles have not changed along with it… Now, more and more folks are looking for set back.

Setback also creates a little more comfort, as the vibration and bumps have to turn a corner to get to your booty (and it also creates a bit of a springboard effect)… This is an oversized post in a mostly aluminum bike, and it rides very well. I have also used this Post in 27.2 size replacing an Easton unit (nothing wrong with the Easton mind you), and it rode very well also.

The second best part of the seat post is that FSA have a 2 bolt post designed so that you can easily adjust the front bolt!!! Small things save big hassles (like the designs forcing you to make little-tiny turns of a nut sandwiched between seat rails on other two bolt designs). 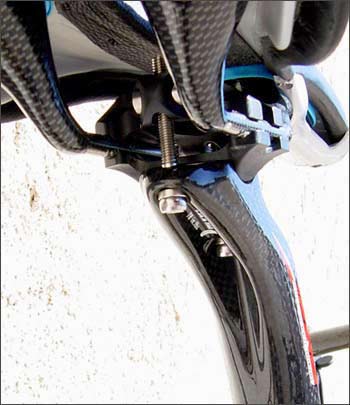 The OS 115 Stem (they do make a K force Light) is a pretty classic metal job, with a simple Carbon front cap. I like this, as Look and a few other folks did a recall on stems where carbon was used in the neck, in the form of a tube, glued between two metal pieces (and if there’s one thing you don’t want to fail it’s a stem…). What is kinda funny is that some carbon stems are not much lighter (and some are quite a bit heavier) than metal… FSA’s 115 falls on the light (not lightest) side (look up the specs at Fullspeedahead.com). It also falls squarely on the stiff end, and there will be no worry of durability. Personally I can do without Carbon in some applications (CAUGH… 2004 Campy front mech, CAUGH). 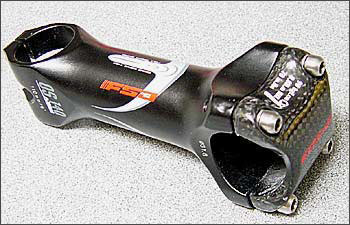 The Carbon Cap has smoothed edges and the inside metal portion is also finished well, so that the worry of Pinching today’s carbon bars is less (USE THE TORQUE SPECS!!!).

Heading to the Bar

The Bars themselves look great, but I didn’t think I would like them. 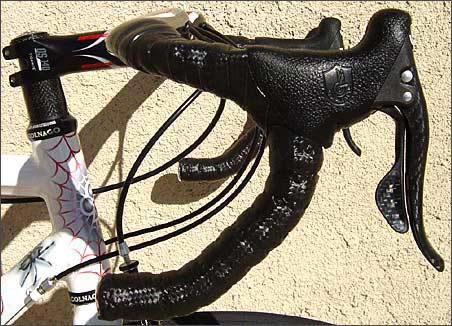 I basically thought that anything with this much movement and change in shape must have been designed with someone’s hands in mind, and I knew the hand wasn’t mine… I thought that these would be like a few of the one piece bar / stem combo’s I have tried. The FSA’s were similar in looks, but unlike the one piece types, these rotate in the stem so you can tilt the bars to taste and (with stem sizing) they are adjustable front to back and, by flipping the stem over or changing the stem rise, they are adjustable up and down (erm, take the bars out before you flip the stem…).

The Bars themselves are flyweight. The Oversized clamping area at the stem clamp area (and the oversized bars themselves) make these plenty stiff and, in combo with the chubby stem, make for a very stable front end.

FSA use a stipple finish at the clamp area and at the ergo lever attachments so that you are less likely to feel the need to tighten things beyond specification. That said, use torque wrench anyway and set it to the specs in the instructions (and don’t use a shop that doesn’t use one…) 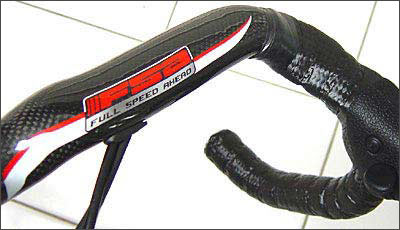 Installation was tougher than usual, as pulling cables internally is more work than taping them outside (Shimano will be far easier, as you are only tugging one cable through…). But the look is great and FSA give you little doodads that finish the holes off and prevent cable rattle. The “bigness” and shape also make mounting computers a little interesting (stem mounting is easiest and looks cool). 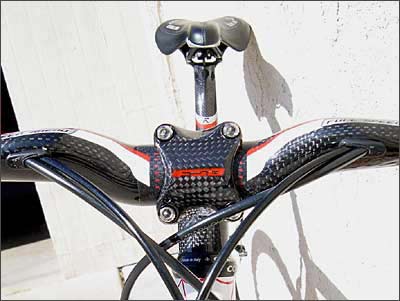 I have run FSA’s cranks almost exclusively, as the bang for the buck factor is high and so is the performance. The other parts from FSA seem to be in that ballpark as well… The Seat post sells at $20 – $100 less than competitive all (or part) carbon posts. The Stem sells for a hundred bucks or so. The bars are less than several other All Carbon multi shapers (223,974,995 Turkish Lira less than Stella Azura’s). When you look at the Bars and Stem when compared to the one Piece units available, you save better than $100 and you have full adjustability… FSA’s Cranks are also Hundreds less than the Carbon of Campy, Stella Azzura or Manufacturer branded cranks from Pinarello or Colnago (although the Colnago cranks are damn pretty…), and this despite the fact that they look extremely similar to the Pinarello’s in particular.

The FSA stuff is taking off like a shot in Europe as well as here in the states and for good reason. Don’t be surprised when you find FSA stuff working under Paolo Bettini and Quick step, along with a boat load of others. In fact, lets empty the boat:

I guess that qualifies FSA as being “represented” in pretty much any break you might find, and it’s for good reason. Hopefully you don’t judge your gear by the price tag attached, but if you do, next time you go for bits, call ahead and have your shop raise the price on the FSA stuff before you stop in… You’ll be glad you did.

Check out this stuff and more at: (FSA’s House of parts)