Increasing power transfer to your bike’s drive-train is an upgrade worth considering – and FSA’s K-Force and Compact SL-K cranksets and MEGAEXO bottom brackets are solid options to give your circular motion some direction… We put ‘em both to the test.

Ever since Tyler stormed the 2003 Tour on a set of FSA’s Compact cranks, I was curious to give ‘em a whirl. I admit to never gaining the fitness or strength to really do my 53 chainring proud, and I’m secure enough in my manhood to admit I need a 39×27 to scale the Alps one week and the Pyrenees the next – so the FSA SL-K Compact mega EXO cranks & bottom bracket seemed worth a look… 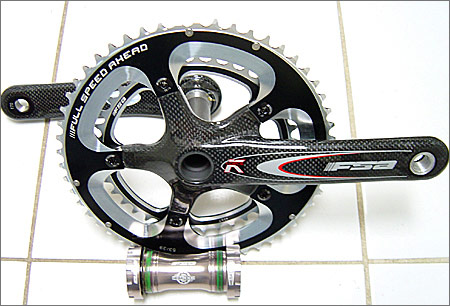 The top-o-line (standard sized) FSA K-Force cranks and MegaExo bb. Claimed 740 gram weight puts in with the “lightweights”, and the monocoque crank design is a big stiffy.

… so a call was made to the FSA guys in Seattle, and our chat soon expanded from “Compact” only, to encompass the K-Force standard sized cranks as we discussed their newest offerings to boost power transfer from pedals to wheels. 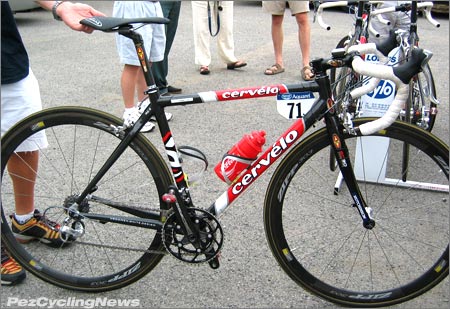 Really big gear ratios aren’t possible (so your “Hour” attempt is out of the question), but for most of us a 50×11 is tall enough – it’s almost a foot longer ratio (ie: you’ll travel almost a foot further with each complete pedal rev) than the 53×12 you’re riding now! 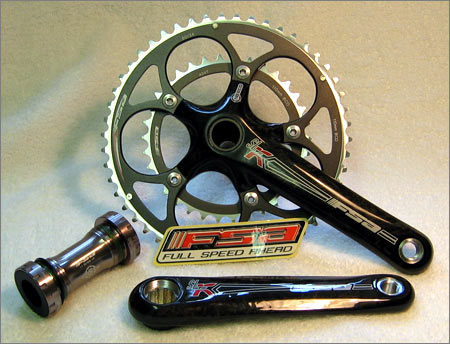 The SL-K Compact MegaExo comes with everything you see here – for the same price as a lot of highend cranksets (minus the bb).

Interesting Point #1: North American interest in compact cranksets got a big resurgence after Tyler’s 2003 TDF, but these things have been huge in Europe – and especially Italy – for years. Turns out the Gran Fondo set have been running compact cranks for a while, and we’re not talking a bunch of granny rollers here – these are the cycling nutters who train hard like we do, all for the purpose of humiliating the guy from the next town over in one of these several thousand rider “races” that often run up to 250km.

Interesting Point #2: FSA sold more compact cranksets in 2004 than any other item, including thousands to European markets.

Interesting Point #3: As a sponsor of the CSC race team, FSA is in constant contact with Team CSC about product development, and Bjarne was quick to see the advantages of having a box of the compact cranks in the team truck. His original plan was to fit them to the domestique’s bikes on heavy mountain stages so the guys could spin higher rev’s as they joined the autobus to finish and to aid in recovery after their work was done.

There were a bunch more interesting points, but I’d heard enough to close the deal. 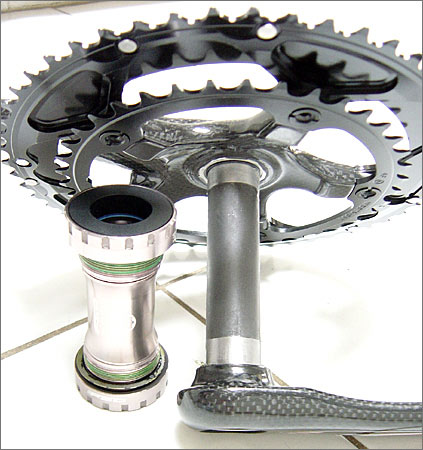 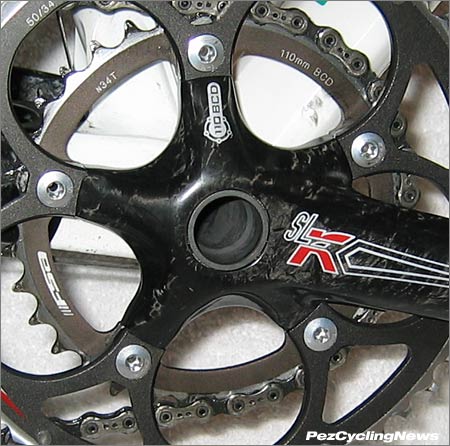 Get your choice of “gossamer” solid black finish, or the “au current” carbon flake look.

WHY GO EXO?
The basic advantage of the Mega EXO cranks and bb design is that it’s lighter, stiffer, less expensive, and is likely more efficient for the average fit rider than traditional cranksets with internal bearing bb set-ups. That’s a MEGA claim, and you may well wonder how can something that looks so darn… “Mega” – actually be lighter – stiffer – and less expensive…? Good questions Grasshopper…

1. Lighter – The whole assembly (cranks + bb) weighs less than a lot of other traditional cranks with internal bbs because it requires less parts. The crank assembly is basically 2 pieces with the axle bonded to the drive side as a single unit. The reported weight of the Compact SL-K units is 785 grams, which puts it nicely in the middle – the FSA K-Force cranks come in at 740g, while Shimano Ultegra is 823g, Shimano Dura-Ace Hollowtech is claimed at 740g including BB. So they’re not the lightest, but they’re in the ballpark. You can even save a couple of grams from the shorter chain length and slightly smaller chain rings. 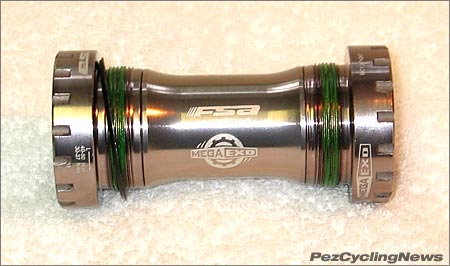 2. Stiffer – Stiffness is added in 3 areas – the cranks themselves – the carbon fibers are layed up to be stiff and light both laterally and long-gerill-illy – okay length wise. The crank arms themselves are also straighter than traditional cranks that curve slightly. This maintains a standard Q-Factor (the distance from the bb center to a point midway between the two chainrings) so we don’t have to change our riding position. And a straight piece of material – in this case carbon fibre – is usually more rigid than a curved one.

The axle is 24 mm in diameter – (vs Shimano’s Octalink 22mm axle and 17mm for old style square-taper axles.) – allowing for greater torsional loads on the axle before flexing occurs. Add in the MEGAEXO bb (with those externally mounted bearings) and you create an even wider platform to hold the crank axle. This wider platform requires more force before something gives in the wrong direction – think of it as William “The Refrigerator” Perry (remember him?) getting into position with the low, wide feet-apart stance. 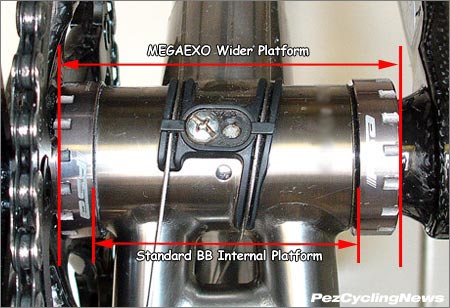 See for yourself – externally mounted bearings create a wider (and stiffer) platform for the crank axle.

Exactly how much stiffer is stiffer? Quantified numbers weren’t available when I wrote this, but given the proven physics of the design, and the number of factors that you’re mind would have to be aware of and measure during a ride, the best way to see for yourself is to ride ‘em. The guys at FSA say you’ll notice the diff.

The carbon fibers and adhesive resins of the Compression molded SL-K cranks are layed up to return a very stiff, very strong finished piece, then compressed under something like 25 tons to turn all those fibers into one solid unit (much like a chunk of aluminum), which is then finished off with a little machining and the addition of the finishing coat for looks.

The K-Force is monocoque moulded like carbon bike frames, using a proprietary design to make it stiff and light. It allows for more complex carbon lay-ups than compression moulding, which means more options in shape, densities, & performance characteristcs.

3. Less Expensive – Pricing has been downwardly affected by the requirement of fewer and more standardized parts, and carbon fiber has come down in price over the years. The SL-K Compact MegaEXO ships with both crankset AND bb for the same price as a lot other other highend cranks alone – it’s like you’re getting a free bb. I saw the Shimano Dura-Ace 10 on for $400. – $40 bucks more than this set-up.

4. More Efficient Pedalling – For a lot of you this may be somewhat subjective, but you can also measure this with anything like a CompuTrainer. The smaller, closer gear ratios of the Compact Cranks allow you to spin higher revs – and we’ve all seen how Lance used this to advantage over the “big gear boys” at le Tour. If you’re built like most people – less load on your legs also means longer life in the knees and a lot more years of productive riding. To me that’s a lot more efficient. 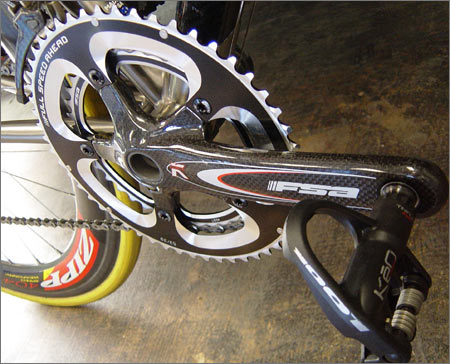 Both the K-Force and Compact SL-K feature straighter crank arms, which are inherently stiffer than traditionally curved arms.

ROLLING THE GEARS
Last November I was coming back from 4 months off the bike due to some nagging knees issues, and figured switching to a compact set would be great to get me spinning again and reduce stress on the knees. So after some steady progress back to pedaling and a couple of mid-winter snow-storms, I fitted the FSA SL-K’s to the BMC and started increasing my miles and intensity. 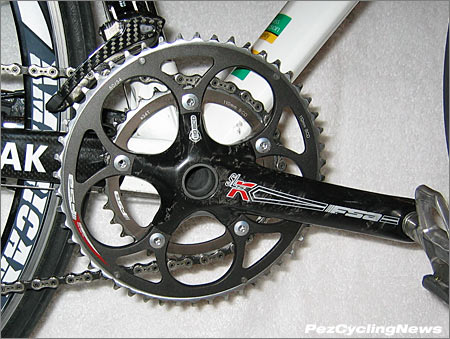 The Compact SL-K comes with 50/34 chainrings which, for the average rider can offer a more useable range of gears.

Worried For Nothing
One of my preconceived concerns was that I’d spin out too quickly on the 50/34 chain rings, and be left behind on club rides. Once again I was completely wrong – as I recently had one of my best rides in months – the Saturday morning jaunt with about 30 in the group. Not only was I able to hang at the back middle and front, I still felt great at the end – largely because I was not pushing huge slow gears – but instead turning over lighter faster gears a la Lance.

The transition was almost negligible – going from 53-39 to 50-34, except that I’m using a lot more of my cogset than before. About the only thing that took a little adjustment was the very occasional dropping of the chain shifting down from the 50 to 34 too fast, until I learned how to shift without dropping the chain. 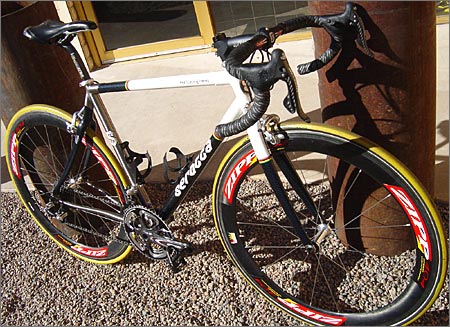 The FSA gear is a nice addition to any rig – even a custom built Serotta.

Bottom line is that the more I ride ‘em the more I like ‘em, and I’m now dreaming about flying up the Stelvio and dirt-road Finestre when I hit the Giro in May. Now if I can just convince the guys at FSA to let me keep ‘em for the “Grand Tour” test…

Where Get ‘Em
• Check prices at Amazon.com here