Today on PEZ we travel over to Europe where our ex racer Chris in France has been checking out some cool new products from BBB accessories and Scicon Bags and our ex-Pro mechanic Alastair in Spain has been spinning his legs with the latest in accessories from Wahoo. 3 products that won’t break the bank but proved to be very practical indeed.

BBB Signal Lights
One of the best things about working for PEZ is getting to see the latest and greatest gear by visiting shows like Eurobike and going to product launches of exotic bikes but sometimes it’s the little products (and the ones that I can actually afford) that kind of get forgotten – but are actually the most practical. Case in point being these two new lights from BBB, the Signals. 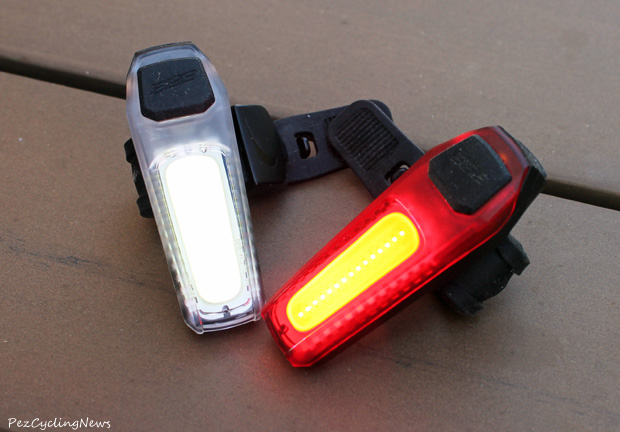 It’s hard to get excited about a pair of lights when there’s so many other cool products out there to test but these two lights proved to be worthy of a test as they were incredibly bright, lightweight, simple to use and very robust. In fact they passed every test I gave them including my two young children throwing them – and sometimes catching them in their unlit room to roars of laughter. Yes, apparently it’s an hilarious game – sorry Mr BBB.

Now let’s talk about some features of these lights and why I – and my kids were so impressed. 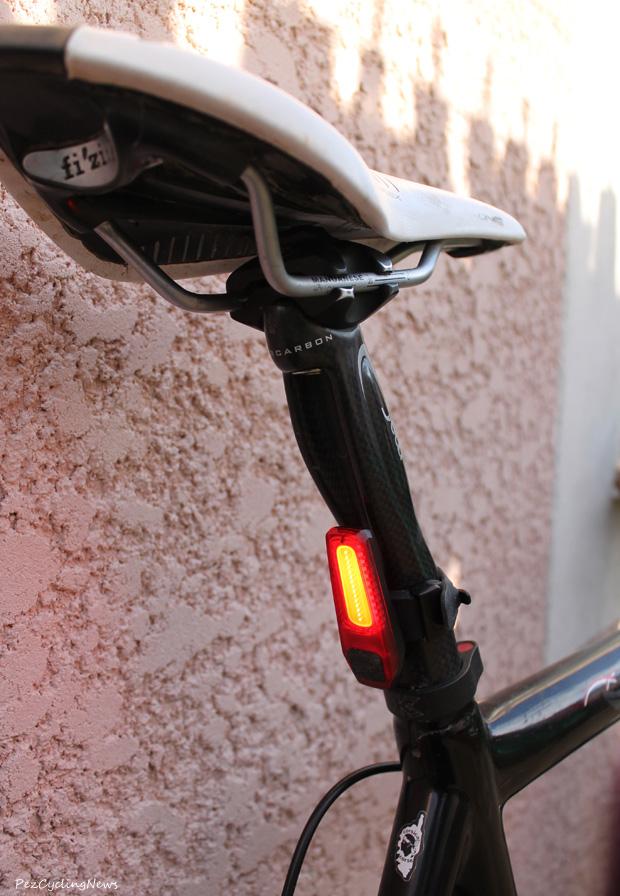 First up is the actual lighting which is provided by a super bright white, Chips on Board (COB) LED that has 3 modes, low, standard and high. Standard was more than sufficient for my late evening riding that I’ve been doing lately although I occasionaly changed the front light to high beam when I hit some small unlit roads. It was there in the unlit countryside where I was amazed to see that this admittedly small – and cheap light did an equal or even better job lighting the way than my expensive lighting setup that I’ve previously used.

With their COB LED the Signals are more a safety light rather than a viewing light but the front unit did a remarkable job of illuminating the road. The rear light is not a flashing unit like many others on the market but instead provides a steady red beam that just lke its front twin offers low, standard or high beam.

The Signals certainly exceeded my expectations in their level of light throw but it would be useless if it only lasted for short periods – which is fortunately not the case thanks to their Lithium Polymer battery (300mAh 3.7v). Although BBB don’t quote any battery life figures I never had the lights run low on me during my rides (there’s a battery indicator on the top of each light) and the rear light even stayed on all night at my house thanks to the kids playing with it and forgetting to turn it off which would have been at least 10 hours. It then completely recharged through the provided USB cable in 2.5hours and was ready to go again at full capacity the next day.

Easy to switch on and off in gloved hands – even for a four year old – and even simpler to attach to the bike with a basic silicon strap that lets you choose which way you want the light attached. 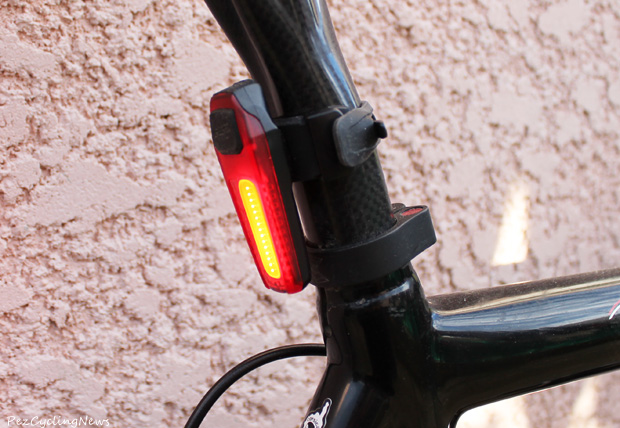 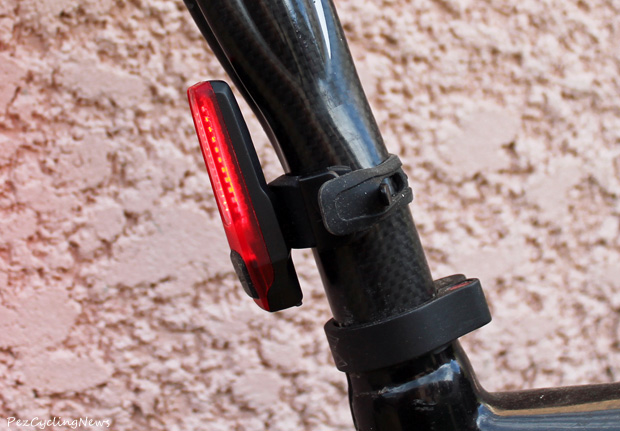 but I preferred it in this direction which put the light output at a higher level.

The Signals weigh just 30 grams but more impressively cost only €32.95 each (around US$40) or €59.95 for the pair. They are available worldwide with prices varying slightly depending upon where you are. For more check out bbbcycling.com

Scicon Aeronaut
The press release for the next product tested, the Sciconbags ‘Aeronaut’ Saddlebag claimed that, ‘The Aeronaut is not just another saddlebag, but a true revolutionary concept engineered to reach perfect aerodynamic balance and full protection.’

Calm down guys, it’s just a saddlebag. I wasn’t getting too excited myself but upon reception of this ‘revolutionary concept’ in my mailbox I was immediately impressed. The Aeronaut certainly is like no other saddle bag I’ve used or even seen before with its fibreglass half shell, silicon cover and no tool installation and it gets full marks for originality.

Fill the half shell with what you need, stretch the silicon cover over the top and then clip it on to the provided attachment that you install on your seat rails in a simple twist action and you are ready to ride. No buckles, no zips – no tools needed to install.

At first glance I didn’t think I’d be able to fit a tube into the shell but it actually fits very easily and I ended up having a tube, the provided tire levers, 10 Euros and an energy gel in the bag at all times over the last 3 months with no problems.

Scicon make a big deal about the smooth surfaces and aerodynamic shape of the bag claiming that it minimizes significantly the drag coefficient over a standard saddle bag and although that is probably true I don’t buy a saddle bag for aerodynamics, I get one for its practicality and the Aeronaut is very practical indeed. No zippers or buckles to break, a very slim profile that stays well within the line of the saddle so you won’t get any thigh chafing and enough room for the basics that you need to take.

The Aeronaut tucks away so discretely behind the saddle that you barely notice that it’s there.

Weighing in at only 99 grams its available in either fluo yellow or black and is currently on special in Scicon’s online store for €24,30 with a €10 worldwide shipping fee. Certainly worth a look. 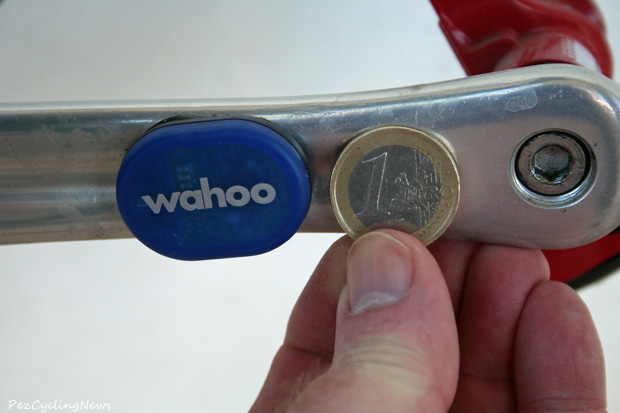 The Wahoo RPM Cadence Sensor is one of those simple little products that is just a great little addition to your training arsenal and so easy to use.

First the installation: You stick it on your crank and simply turn on whichever device you use to connect with it and that’s it. Sounds too simple, but there it is. (Next time we’ll send Al something difficult to install – he is an ex-pro bike mechanic afterall! – Ed)

It connects via Bluetooth 4.0 or to any ANT+ device, I use a Garmin 500, but it will also link with your iphone or ipad. Unlike other cadence sensors there is no magnet, just the tiny unit itself. It comes with double-sided tape, zip ties and two different mounts, depending on how you want to use it, if you prefer you could even just attach it to your shoe and at only 7gms the weight weenies need not worry here. 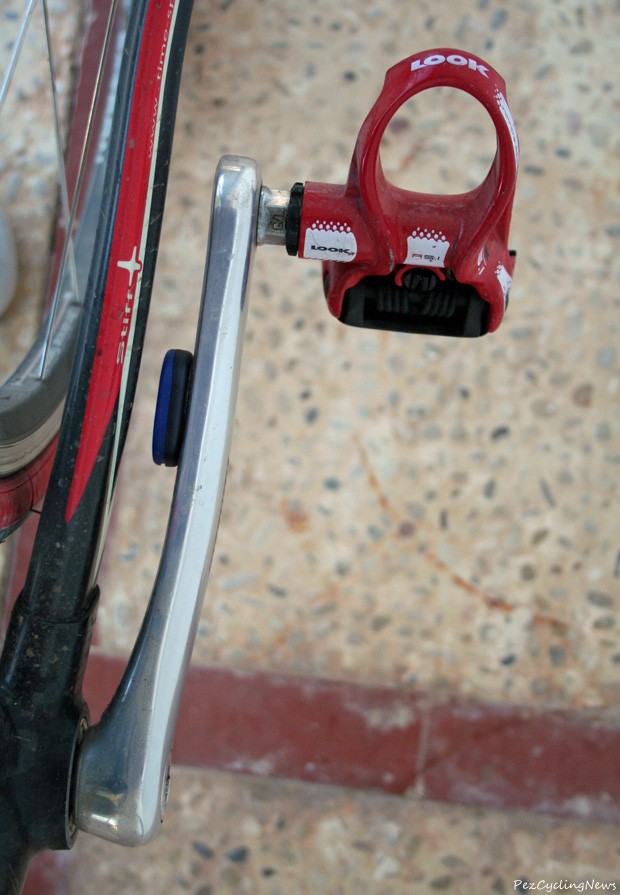 Attached and ready to ride!

Why do you want to know your pedal revs of course? Well not all of us can afford or can justify a power meter but if you know your pulse, speed and can see you are pedaling at around 90 rpm, then you know you will be training properly. And let’s face it (especially for us that are less than fit); anything that pushes you to ride a bit harder has to be a bonus. 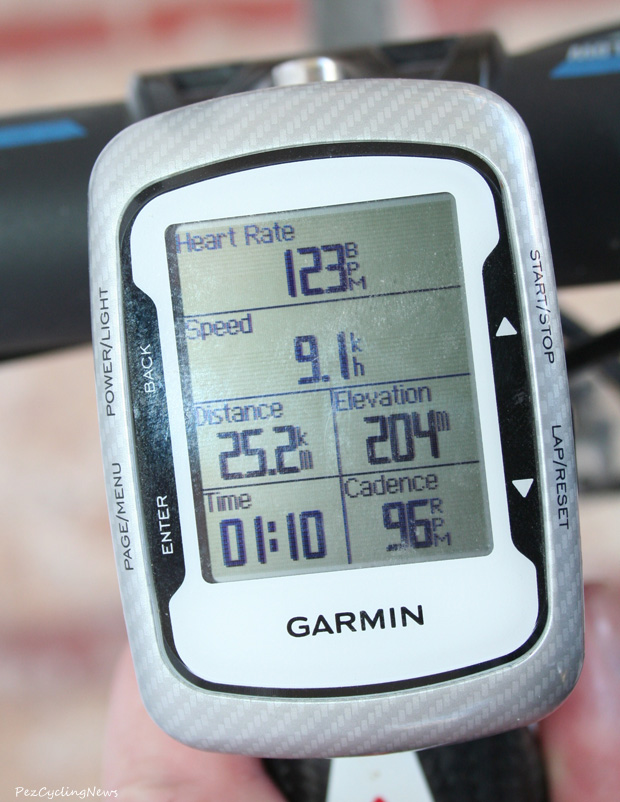 Its not only while you are riding that it is useful as all the cadence info will also be downloaded to your Strava account for after ride analysis. At €49.99 it won’t break the bank and runs off a standard watch battery. More info at wahoofitness.com