Most job’s have their perks, some more than others. Little did I think when I started PezCycling News that one day I’d be test riding some of the best racing machines available… This thought, (and many others) popped into my somewhat numbed headspace as I stamped out the 13km climb to 1100 meters up Cypress Mountain in the locally popular 39×23 gear (we have a lot of steep hills in Vancouver).

It was my first ascent of the climb this year, and I remembered how much I suffered last year. Luckily, this year I’m:
a. – in better shape, and
b. – pedaling the 2003 TCR Composite 1 from Giant. Oh Yeah baby… 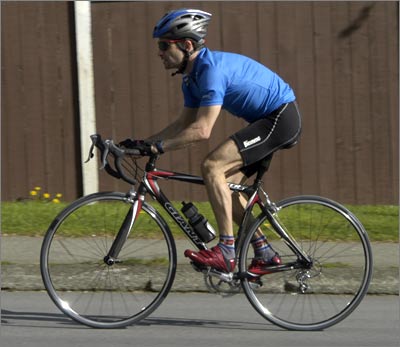 Note: Climbing position assumed, although not on actual climb described.

The climb took about 45 minutes, including one ill-advised off-bike excursion to refill the water bottle (Note to self: road shoes not intended for off-road use…), and even though I was close to coughing up a lung near the summit – the overall ride was rather enjoyable – for a Tour-length climb that is…

Which leads to my main point about this bike – it is Com-for-table – with a capital “c”.) Not in a mushy-La-Z-Boy-recline-and-saw-logs kind of way, but more like something that feels so good it brings you to the heightened edge of sensation, keenly aware of the movements of your own body, the passing of time, tingling everywhere – if anything could feel that good… 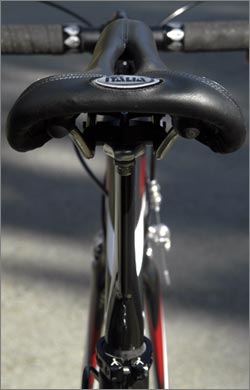 That climb is a long one, which allowed ample time to ponder a bunch more stuff, like how does Giant make a bike feel this good? Let’s review: Giant led the way in the “compact” revolution, stepping into the big leagues of high-end builders when they began sponsoring Team ONCE a few years ago (’98 I think..). Until then, if you were like me, you probably thought they were producers of utility bikes for the masses. Things have come a long way, perhaps further in perception than reality, but then perception often is a reality… (Not that I had any doubts about the quality here, I mean, if these bikes are good enough for the ONCE boys, who am I to question anything? The bike is right on – tight, snug, clean… fast.)

But First Some History…
One reason this frame feels so good is that Giant pioneered the whole compact frame “revolution” back in the late 1990’s. The actual idea is widely attributed to reknowned frame designer Mike Burrows, who reasoned that a smaller frame made with shorter tubes was lighter and stiffer than traditional designs – well duuh! Of course the Euro-peloton – forever long on tradition and short on foresight, scoffed at the idea. In fact, Giant was the first major producer to see the future of this, and saw their pending sponsorship of ONCE as their true shot at the big leagues. Apparently Giant snuck a compact frame into the ONCE team truck when no one was looking. It took a while, but eventually riders tried the “radical” new design, probably more for a laugh at first. But they soon got it – this was a good design. And over the past 3-4 years, Manolo Saiz himself has been closely involved in the refinements you can enjoy today. 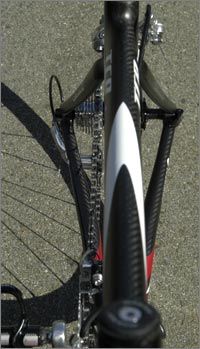 Now check out the bb-zone – the whole frame is built entirely by Giant in their state of the art facilities in Taiwan (yup) – they’re obviously proud of their work laying the carbon fibers together, and wisely rejected the idea of full-frame paint in favor of a few decals – why cover a work of manufacturing art? The work on the joints is flawless, and you’re invited to admire every individual curve at your leisure. 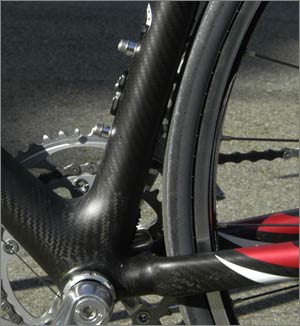 The TCR1 is in fact not the same “bike” as ridden by ONCE, but it does use the same composite frame. In fact, it follows the TCR “Team” Composite (Campy equipped), and TCR0 Composite (Dura-Ace), in the line and comes decked in Shimano’s Ultegra gruppo, Cinelli stem, Mavic Cosmos rims, hubs and spokes, and a bunch of other Italian-made goodies to satisfy the Euro-geek in all of us.

This is all top end gear – performance wise – and having had the chance to ride a bunch of other, seriously more expensive bike spec- I gotta say that my rides are just as much fun on a bike decked with spec I could actually afford! 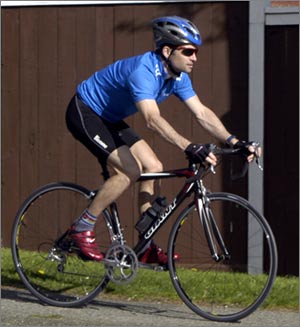 Back to the ride –
What goes up must come down – and descend we did – reaching speeds of around 70kph, full-on egg-tuck, taking turns sling-shotting each other over the 15 minutes it took us to get back to the thick air… The wind was blowing hard – even blasting in the corners. This was particularly noticeable with the compact frame – the shorter wheelbase did feel a little twitchier at high speeds – but nothing I didn’t get used to. 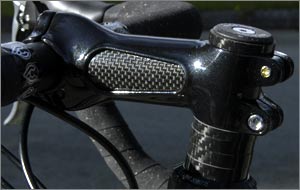 The other big upside of the compact frame is that this baby corners – fast and sticky – . Possibly better than anything I’ve ridden – it’s definitely got enough jam to satisfy the cafй-racer in all of us – move over Big Halsey! It soaks up the bumps the way good carbon does, and I seriously felt like I could ride this bike for hours without getting fatigued or sore.

I logged several hundred km’s on the TCR1, and reluctantly gave it back to the guys at Giant. They promised me when I picked it up that I would be impressed with the ride, and they were right. I’m guessing you will be too.

Get more info on the Giant TCR1 Composite at the Giant website: www.giantbicycles.com

You can also get some scoop on a Limited Edition TCR to be revealed at the Tour.

TDF Preview: Lance On Track, But Who’s In Back?