For the two time trials in the Giro d’Italia on Sunday May 25 from Merano to Bolzano and on the last stage on Sunday June 1st in Milan, Cicli Pinarello has made special bikes for the two leaders of the Fassa Bortolo team Dario Frigo and Aitor Gonzalez which have been designed to optimise their performances against the clock. 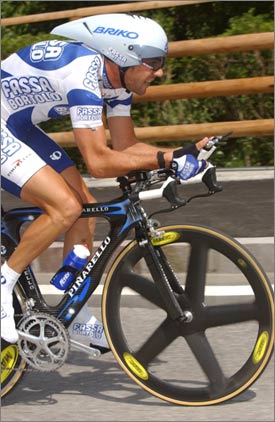 The Treviso based company has always paid special attention to the frames destined for time trials. Everybody remembers the “Espada” made for Miguel Indurain and his hour record attempt in 1994 when he set a distance of 53.040km. After the record Indurain used a road version of the bike in the time trial in 1995 and 1996 before retiring from racing. Other similar
frames were subsequently produced and used by several riders sponsored by Pinarello until 2000 when the new UCI rules were introduced and stopped the use of prototype bikes which always captured the interest of thousands of bike fans.

The Montello bike supplied to Frigo and Gonzalez is a monocoque frame designed to be used both in time trials and on the track. It a “new generation” frame because it was conceived following the new UCI rules which require a triangular structure with tolerances based on the thickness of the elements which make up the frame’s triangle.

The prinicipal characteristic of the frame is its extreme aerodynamic shape and elevated rigidity. This was obtained by carefully designing the profile of the tubes and the positioning of the components. For example the rear brake is placed very low on the rear stays to increase the aerodynamic flow above , were it would be more exposed to the airflow. Thanks to these details it has been possible to recover almost 70% of the advantages of the old frames used before the change in the UCI rules.

The aerodynamic qualities of the frame are continually tested and proved in wind tunnel and road tests as is Pinarello’s long standing tradition. The frame used by Dario Frigo and Aitor Gonzalez weighs between 1.200kg/1.350kg respectively and is equipped with Shark Pinarello Full Carbon forks made from very light and very rigid carbon fibre. They perfectly combine with the frame to give impressive performance.