Ed Hood was busy with his trusty Olympus during the early stages of the Giro, PEZ gives you his highly biased view on the steeds, wheels, components, and little tidbits from the contenders, pretenders, and helpers.

PART 1: The Favorites’ Bikes
Carbon rules OK among the five favourites, the Cervelo of current pink jersey Ivan Basso; the Trek of 2005 winner Paolo Savoldelli; the Scott of twice winner Gilberto Simoni and the Wilier of 2004 winner Damiano Cunego are all woven rather than extruded or rolled. 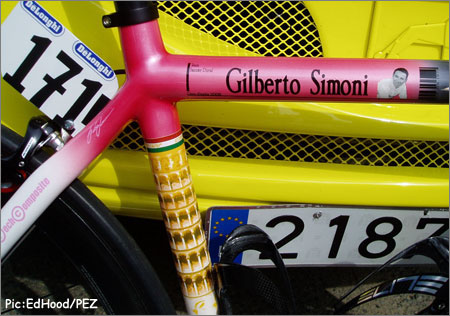 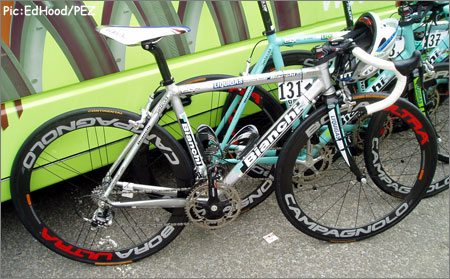 It’s just Liquigas man Danilo Di Luca’s Bianchi which is made of light alloy, albeit an exotic blend of metals from the manufacturers who supplied campionissimos Fausto Coppi and Felice Gimondi with their celeste mounts. 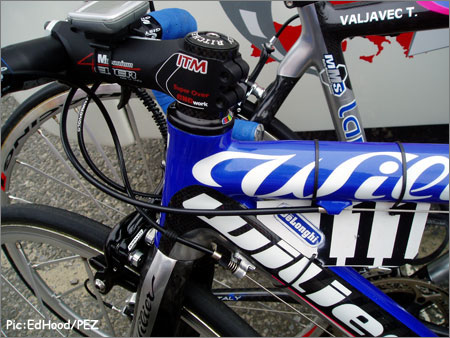 Yes, Damiano Cunego, the Piccolo Principe, is THAT small.

Ivan Basso’s Cervelo
Among my ‘hard-core’ buddies the criticism of Cervelo used to be that they had no pedigree, unlike the Colnagos and Peugeots of this world they had no back catalogue of big wins. 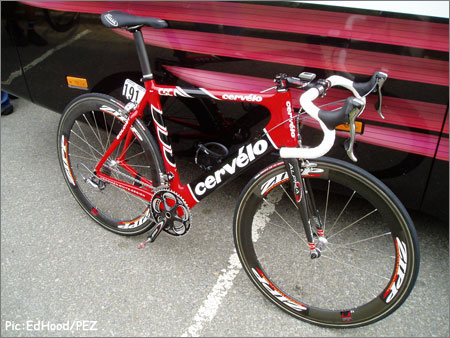 Bjarne Riis has changed all that and it’s hard not to like Basso’s well-proportioned, striking red and black ‘Soloist’. 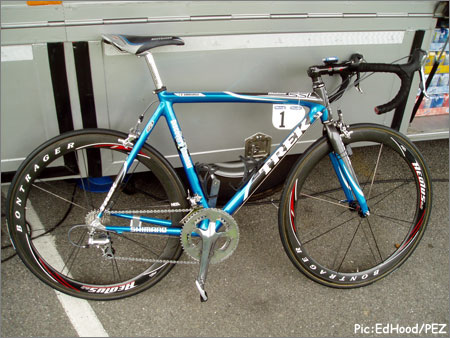 I’m not usually a big Trek fan and wish they would go hiddenset, but I understand their design ethic better now and I think that Savoldelli’s current Madone SSL is a more handsome machine that anything Lance rode, especially now that they have lost that ‘hump’ behind the seat tube. Di Luca’s Bianchi appeals to me too, unpainted and unpolished welds – cool; not sure about the saddle though! 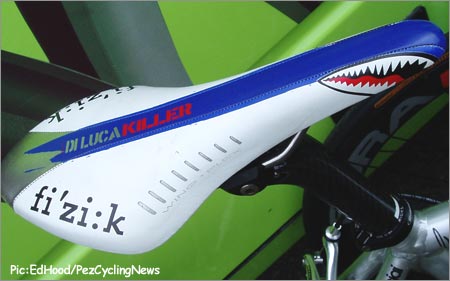 PART 2: ‘Personalised’ Stuff
I’ve always been a lover of under-statement (although I was a huge Super Mario fan) so these Petacchi’s jet fighters on his Conago may be beautifully executed but they leave me cold. 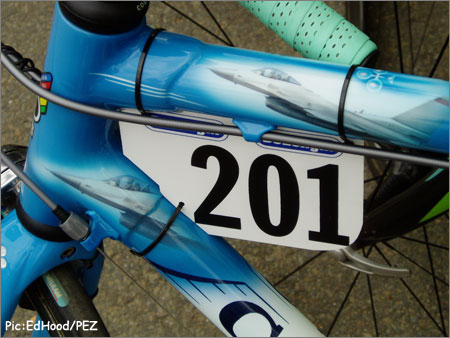 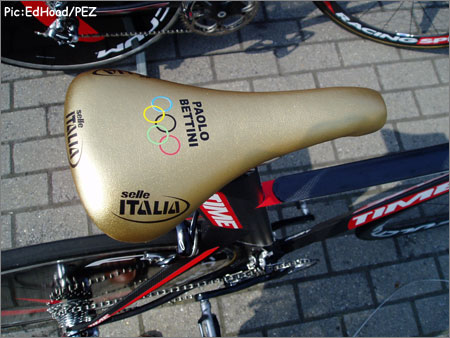 I have a real problem with Bettini’s saddle too, the colour is bad enough but to add that text – it just don’t work for me. 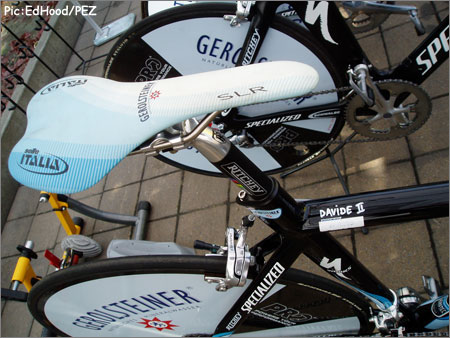 ‘Killer’ Di Luca’s saddle doesn’t grab me either, but I could live with one of those Gerolsteiner saddles on my Specialized if I ever buy one. 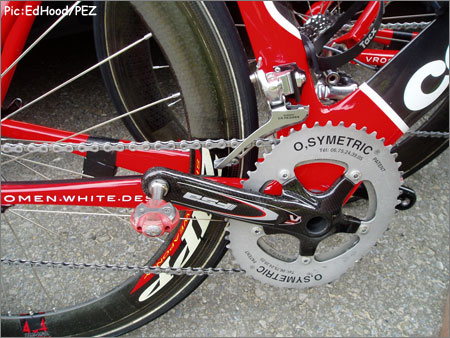 From a different angle I don’t really like Bobby J’s elliptical rings, but they make a statement I guess; note the Ultegra rather than Dura Ace front mechanism, chosen for its longer cage.

PART 3: ‘Trick’/Unusual Stuff
At any big race, if you keep your eyes open there are always little things which catch your eye: 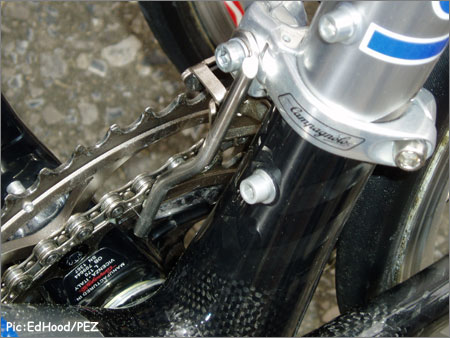 *Most of Lampre’s Wiliers had neat chain retainers to the front mechanism – these stop the chain unshipping off the inside of the inner ring – so much neater than those plastic clip-on jobs. 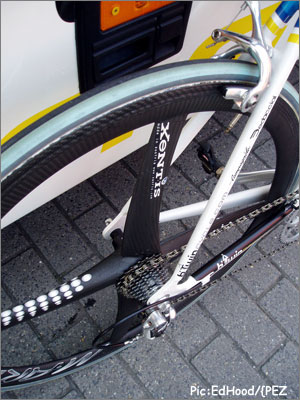 *Xentis composite wheels are strong, light, aero and very popular in the sixes; the cross-over has started with AG2R sporting rears on their TT machines. 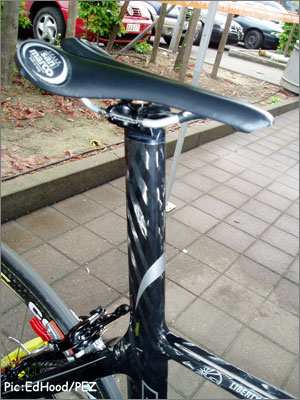 *The ‘fly-thru’ seat tube detail pioneered by Time is still popular, but BH do it neatest. 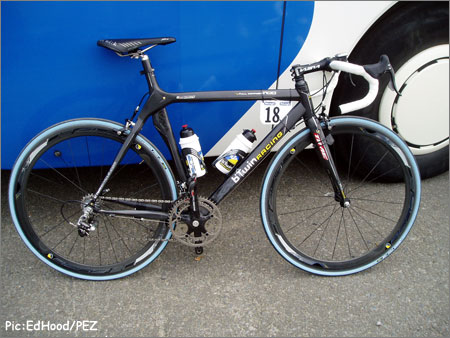 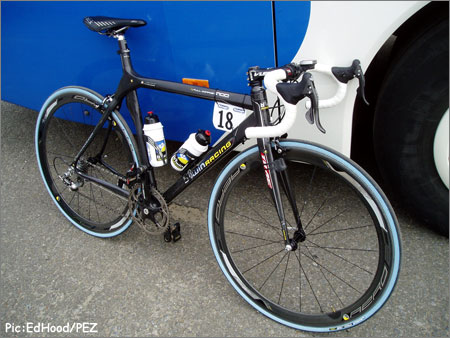 *I’ve always liked AG2R’s no-nonsense aluminium Decathlons but that nice blue, black and white paint-job has gone on their new carbon Decathlon road frames, maybe they will grow on me? 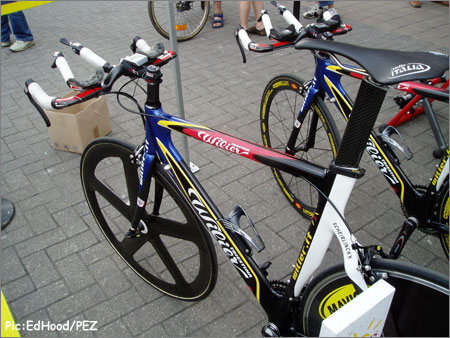 *UCI regulations mean that some riders have to ride in positions which aren’t the best for them with big Staf Scheirlinckx being a case in point; a longer stem would take him too far forward even though he really needs to be. 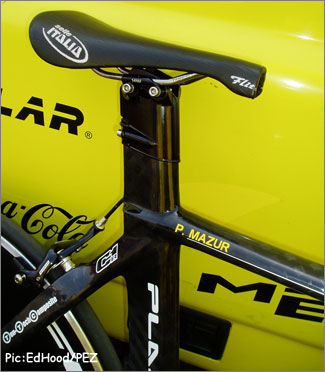 TT bikes too can be seen with saddle noses chopped off to keep the correct distance behind the bracket.

And before you ask – no, a 50 year-old man should not have better things to do with his time!

Dario’s Giro: More Pain In The Rain For Dario