Mechanics hate prologues – time trial bikes which may have languished in the truck for weeks must be set-up and fine-tuned, sometimes for a very short race, like Disco’s Alan Butler says “Two days work for eight minutes of riding.” Here’s a completely biased look at some cool wind-cheaters being tuned for Thursday’s 38km Team Time Trial.

For fans like us, time trials are the business; we can see every rider individually and know exactly who will arrive next. Team time trials are even more watchable, as Manolo Saiz says; “a very aesthetic race.” Take last year’s Tour TTT, it had speed, precision and high-drama when Zabriskie crashed and lost the maillot jaune.

Ed Hood takes a purely personal look at his favourite time trial bikes in
anticipation of Thursday’s Piacenza-Cremona TTT, which marks the return of
the Giro to Italia after its sojourn to Belgium.

There are 22 squads participating in the Giro with 18 manufacturers
represented, Colnago provide bikes for three teams; Time and Wilier two each.
Some teams adopt a “necessary evil” attitude to time trials, and this reflects in the way the machines are set-up, they may be low-profile, but they will not exhibit the same attention to detail as the outfits who specialize in the “race of truth‚” or “cronometro a squadre” as the TTT is called in the Giro.

Here are my top six TT machines from this year’s Giro:

#6: Quickstep and Bouygues ride Time, a company which has pioneered carbon and “fly-thru” seat tube detailing. I’m not usually a fan of seat stays which creep down the seat tube at the junction, but it works here and the resulting “stealth” look is cool. 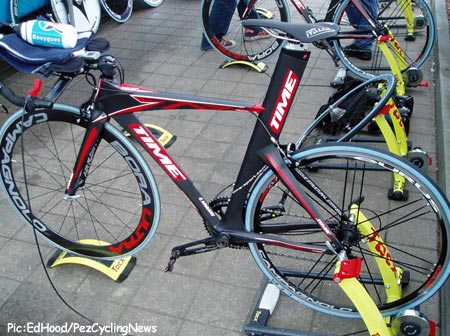 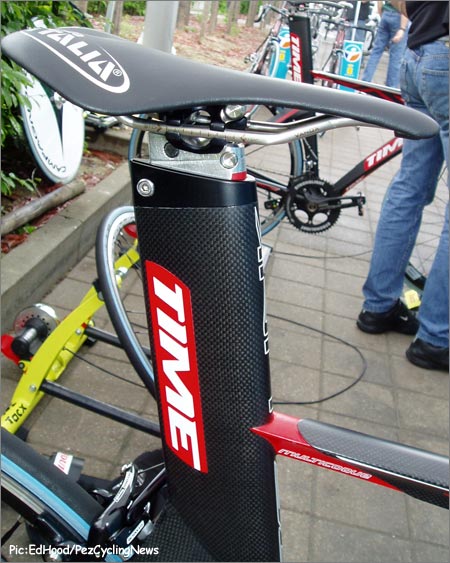 #5: Credit Agricole are on Look carbons which share the neat, aero steering arrangement of their velodrome cousins, so beloved of the world’s track federations. The ergostems spoil their lines for me though; can’t a neat fixed position stem be fitted once the riding position is established? 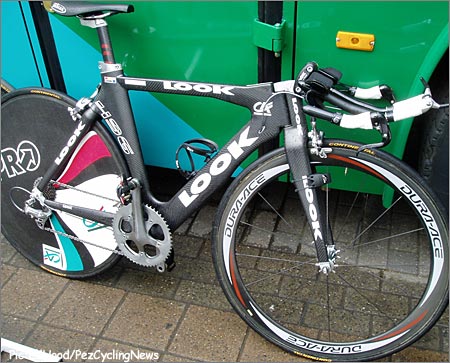 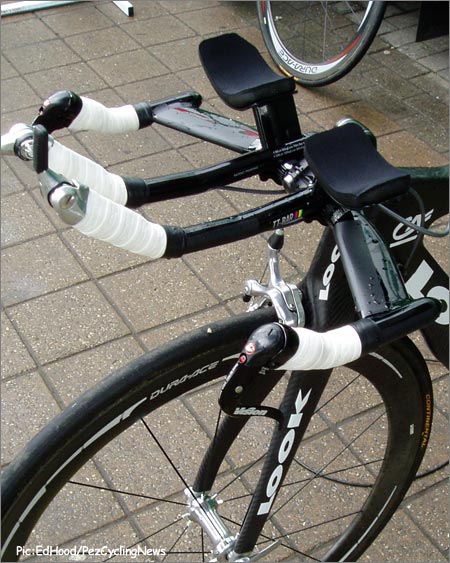 #4: Saunier Duval’s Scotts have that mean, black carbon look and are
seriously light; those yellow decals set them off perfectly. 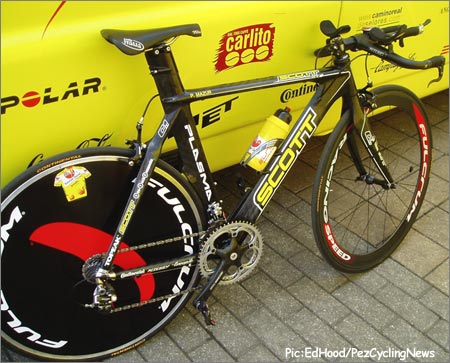 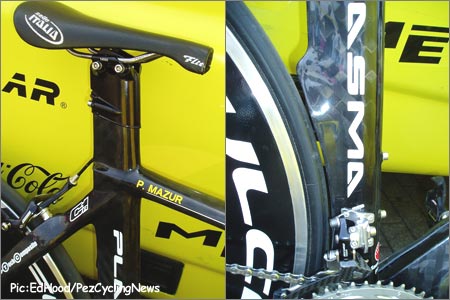 #3: Discovery Channel are a squad who have the “chrono ethic‚ (and how could they not, with Lance, Eki and Savo) Their Trek TTX Equinox gets a hiddenset and carbon aero seat pillar for 2006 and I love those big, macho seat stays with vertical drop-outs. 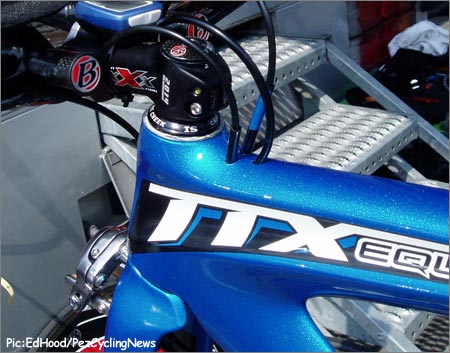 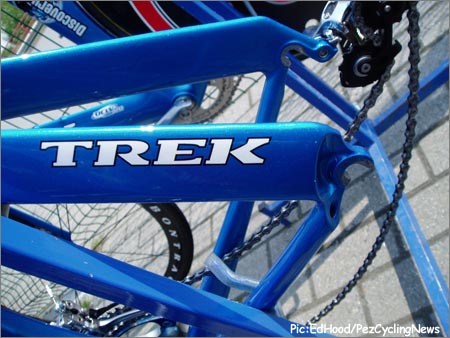 #2: Phonak are on BMC “Time Machines” – great name. Their steering set-up is similar to that of the Looks, but neater. The fly-thru seat tube detailing is impeccable and the CAD carbon tubes are sheer Star Wars. I can’t figure the red and black colour scheme for a team which has green, white and yellow kit though. 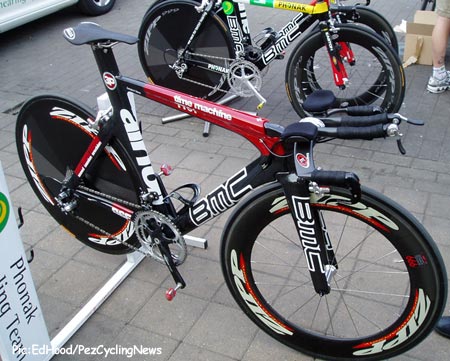 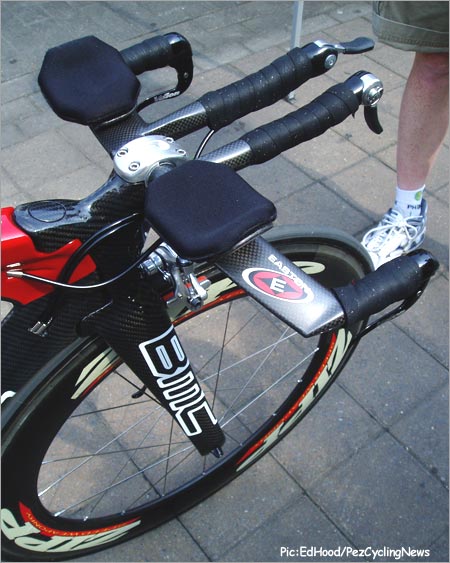 #1: Top of the hit parade for me are CSC with their Cervelos, not surprising really, given Mr. Riis‚ attention to detail and squad top time test specialists Basso, Julich and Voigt. Jens bike was on the stand for us; tiny FSA aero brake levers – three of them so he can slow-up without coming out of the tuck position; beautiful detailing on the carbon aero seat pillar clamping; “solid‚ carbon aero chain rings; a curved seat tube which follows the line of the rear tyre perfectly and a colour scheme which matches the skinsuits – ten out of ten and thanks again to Christophe for letting me shoot the bike at a busy time for him. 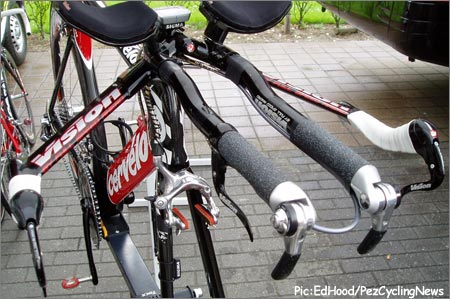 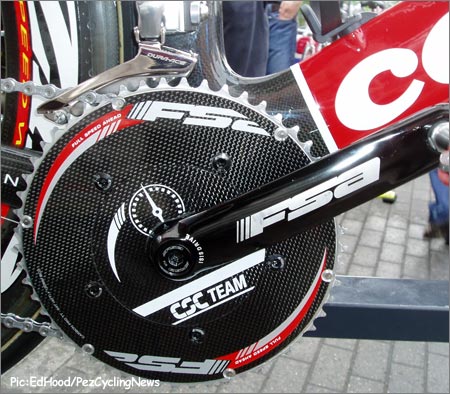 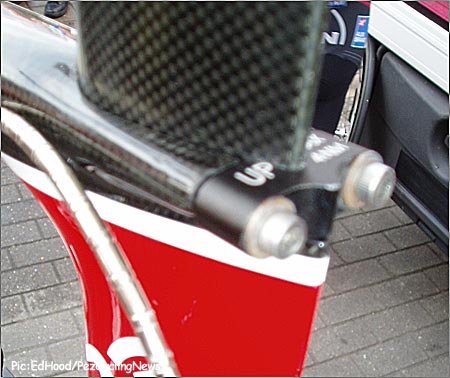 We know it’s blurry… but that’s still a trick seatclamp.