Pez puts a few miles into a couple of the most popular hats in the Peloton. Giro and Bell submit a couple treats for the once over (or under?) And it’s an easy call to say that they ain’t getting these back from us!

First on the block is the Atmos from Giro…
Back in the Dark ages of cycling and hairstyles (1985), Jim Gentes decided that he needed something better than a hairnet to protect his head while racing… So he went into his garage, put pencil to paper and created a light weight but still functional helmet. Then he ran it past NASA for a shape tweak or two and “poof”… Giro.

It didn’t happen that fast, but it probably seemed like it, as the company has grown to be an industry leader. There were growth stages of course (he got so big that he had to use his neighbor’s garage) but now their state of the art design and manufacturing (making not only the Giro brand…) have made ’em top dog in the lid biz… But it all comes down to the same idea that started in a garage, and that isn’t simply selling a product, but making a better product. They still got it.

What folks tend to miss about helmets is what Giro do better than most: that Helmets are important from the inside out.

If you’ve read the other two tests, you know (and probably already knew) that protection and ventilation / comfort are what count (comfort is a combination of things). The thing that amazes me about the Atmos is not what it is, but what it isn’t. The damn thing’s almost not there at all! 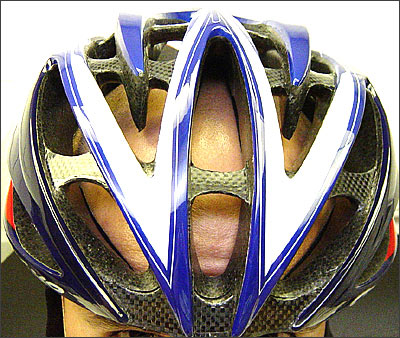 Vent count means pretty much nada. Marketing guys and those in too much of a rush to pay attention and talk about what counts will crow about how many vents are there, but not show you what you should see, and that is how well a helmet manages airflow and how much of that flow is allowed to touch your head. Taking a look at how much scalp is exposed and how far back the view through the helmet holes goes (allowing air to go with it) is the first and easiest thing to note (above). The second thing to note is on the inside, and that would be to peak at the depth of the air channels that link the vents together. 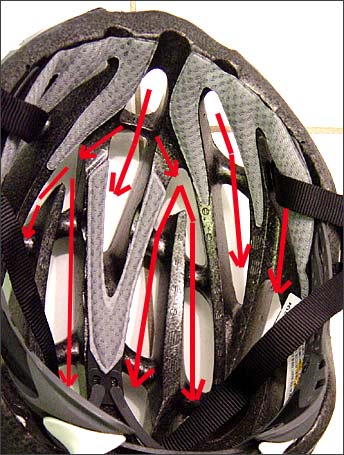 Simply having holes isn’t enough if they don’t let in the good air and drag it across your noodle to take heat and moisture with it. There are helmets out there with huge vent counts that do half the job of ventilating that the Atmos does, because the holes just dead end into a small spot on your head… It just makes a dead air space that allows hot air out, but not much else. There are “holes” and there is “ventilation”. The Atmos has the second thing down pat, in fact, their “second string lid” the Pneumo is another example of that…

The Back of the helmet is as free breathing as the front and you can see a very simple and effective retention system (the RocLoc). Like the Catlike, The Roc loc system is minimalist while still getting the job done. The range of adjustment is huge and the hold is very secure. 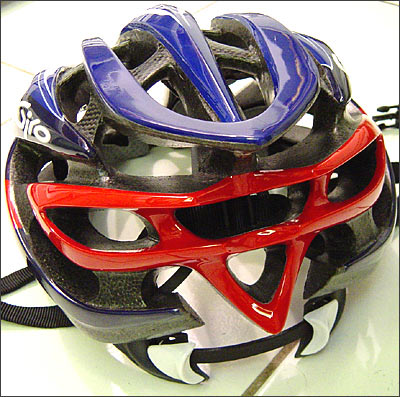 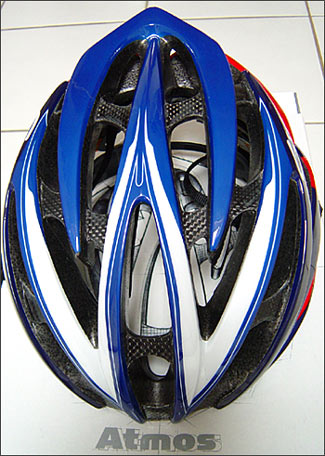 All things considered, it’s tough to beat the Atmos in any measure. The retention system works and is simple and unobtrusive. The ventilation is unreal (maybe too good if you live up north…) Fit is great (a function of the retention system). The only stinker is the 189 bucks you lay out for one. The Helmet Pod is nice, but I haven’t used it in 5 months (even with travel), so maybe a 149 bucks and no Pod would work? Either way, I would still have a tough time not buying one…

Of course if you win a Tour, they’re free, and you can pick your color. Or have a pimp do it for you… 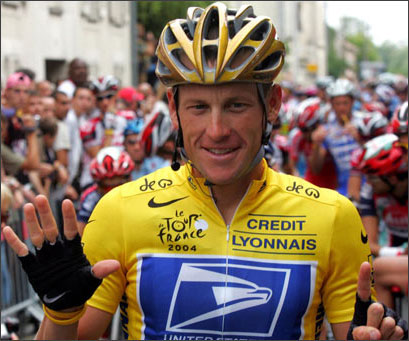 Check out Giro’s site for a whole pile of helmet heaven.

Bell Sports Ghisallo
Bell have been around protecting beans from bumps for a long time… In the sports world, nobody has been on the head of more world champions than Bell. They have been around for the better part of 50 years and you’ll see their helmets everywhere from GP to F-1 to Indy cars and the AMA.

They also do a fair job with guys that are really in danger. 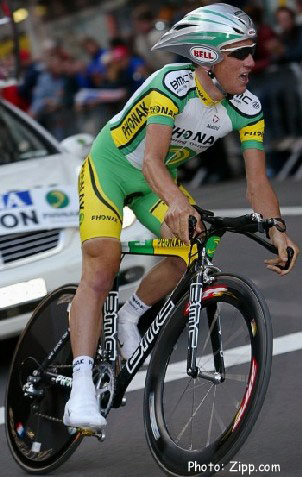 The Ghisallo will be number two soon, as Bell had a new lid at the Tour, but it’s the current number one, so here we go…

The same things to look for hold true for the Bell. 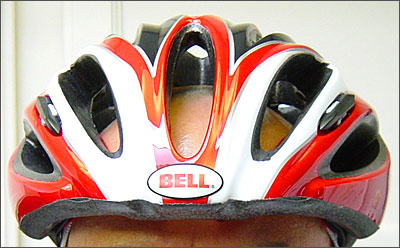 The ventilation here is also easy to see, as the holes are all linked together, giving you a view and (more importantly) uninterrupted airflow from front to back… 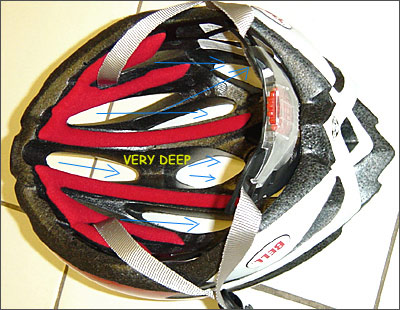 The internal linking of vents, and very deep channeling are even more evident from the inside.

What is not as evident on the Ghisallo as on the Atmos is still there, and that is the internal reinforcement of the helmet structure as a whole. They just don’t have the little exposed ribs (and eye-candy carbon) in the same form that the Atmos does.

The braces are still there, like on the Giro, but there is also more protective material on the Ghisallo in general. That’s not to say it is more or less effective at protecting you, but simply that the Bell has more “meat”. That in turn doesn’t mean that the Bell doesn’t ventilate well, as it does so extremely well. 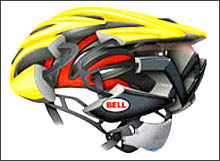 A bit along the lines of the Specialized S-1 we reviewed, the Bell’s Retantion system is large, but the Ghisallo is more secure that the Specialized. The key word though is “Large”. 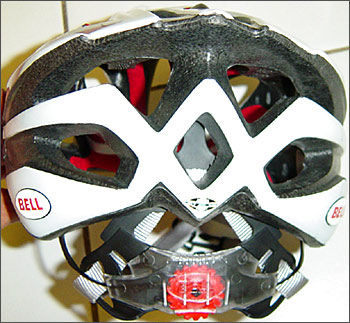 The retention system is bulky on the back of your head, and lacks enough up-down adjustment needed to find a perfect fit on my head. It is also large enough that if you tie a knot in a head band, turn a cap backward etc, the retention system might interfere. It is also solid enough that it doesn’t conform as well to the shape of my head as the more simple strap like closure systems on the Giro, Catlike, Lazer etc… Still, it does hold the helmet on your head, and at the end of the day, that’s what counts. And you might find that the closure system fits right where it should on your head, so make sure you try one!

The Bell doesn’t suffer the price point of the Giro. At 99 bucks, it’s an extremely good helmet! In fact it would be good at $129… It ventilates better than all but the absolute best, and has a super solid feel, but is still light feeling on your head. Plenty of colors to choose too.

And shortly, you’ll be able to see the review of the new Bell Sweep that you may have noticed on Tyler at the tour! 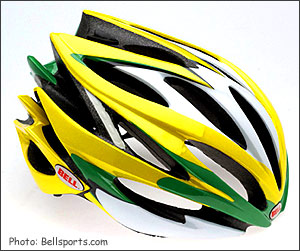 Poke around at Bell Sports Website for better info, and look for em everywhere!