Every other piece of kit has gone under the knife to shed weight to the point of also shedding features. For frames, it’s ride quality, stiffness and durability that leave the room. Wheels take the same cut and so do saddles bars and stems. But what about helmets?

Only the uber expensive and extremely well made pieces seem to get feathery weight without giving up so much in other areas that they still meet the new safety standards. Top of the line helmets have all pretty much bottomed out in the 270 gram plus range.

Until LIMAR and GIRO decided to get focused. 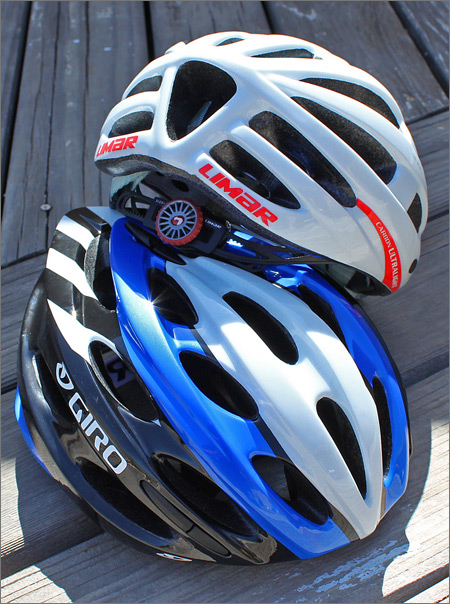 Click the thumbnail up top for a larger view. 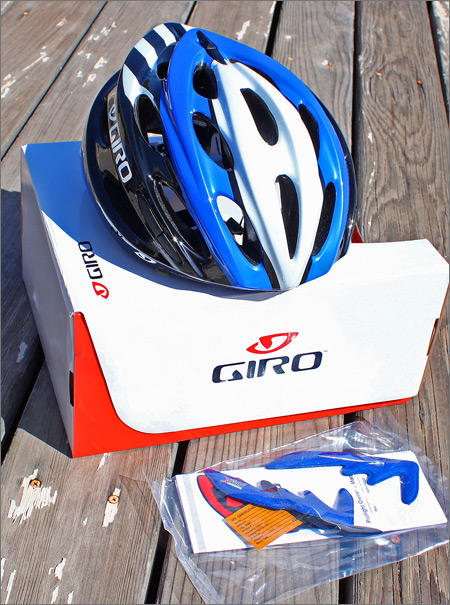 Most have forgotten that Giro have already had a ProLight model… Of course it looked like a picnic cooler from an episode of Miami Vice (big foam, small holes but sweet for the time period) and about 90% of today’s road warriors were not in the game in the mid 80’s, so all’s forgiven for not remembering.

Today’s lid is what you would call an upgrade to the old style though. A tidy nose… 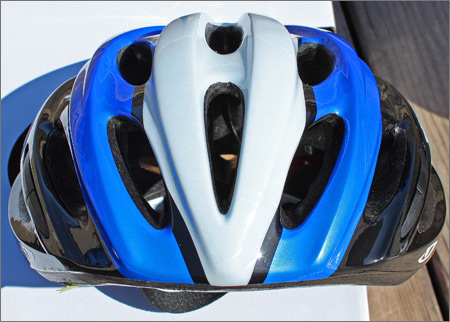 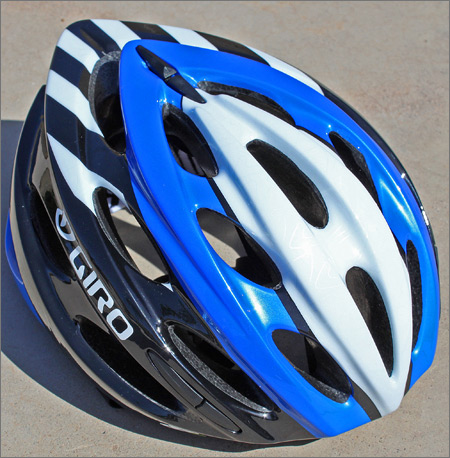 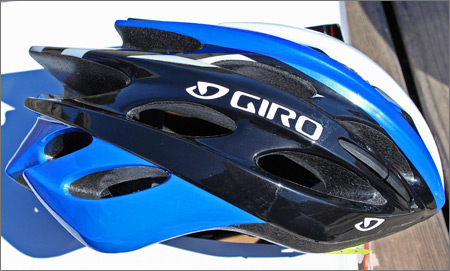 Finishing out back without much fuss. Venting without a lot of decoration or the typical salute to the 57′ Ford Fairlane… 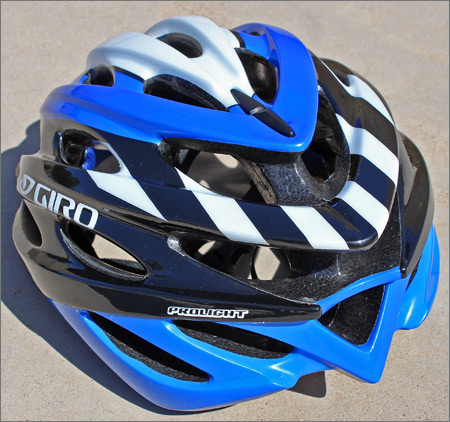 For the Prolight, Giro had a clear focus on weight. That speaks to the fairly low profile of the helmet. It’s a little smaller mass on your hear as you look at it. But within the confines of weight focus, Giro did what Giro do… They are among the best at helmet venting and very deep channeling is on tap from front… 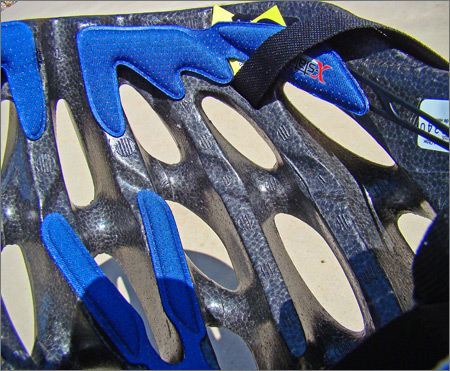 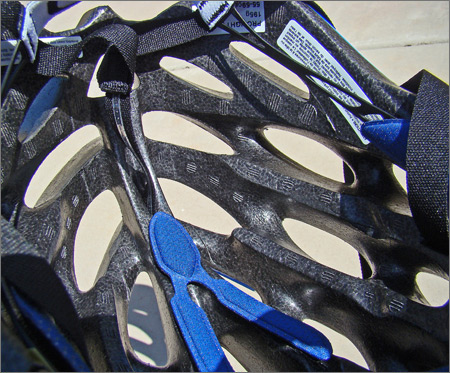 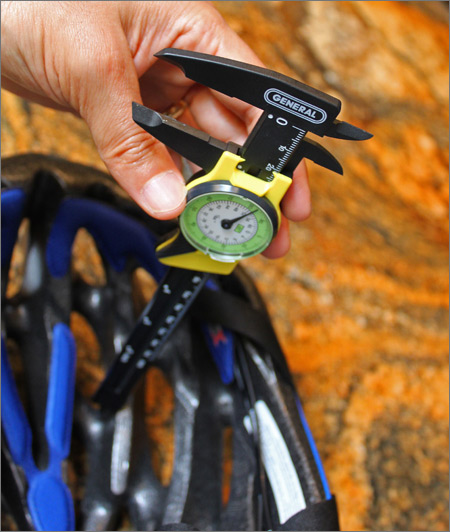 Dump in the caliper and you’ll have channel depths as much as 20mm deep in the size Medium. 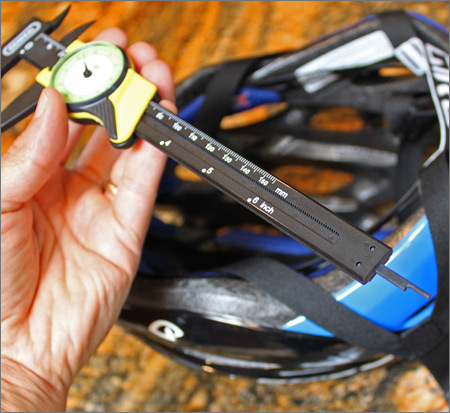 Internal shape and air channeling in helmets is more important than the number and position of the vents (relative to most modern designs with multiple vents in very similar placement).

The air has to come in AND GO OUT. You can either link a couple of vents together or, better yet, have channels that allow open flow from multiple vents to move air freely from front to back. Giro and their Bell Sports cousins do this as well or better than anyone else. 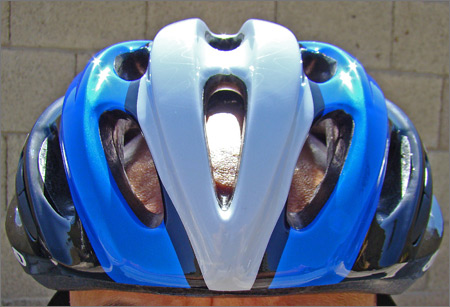 They also had a pretty neat idea on how to shed those last few grams. 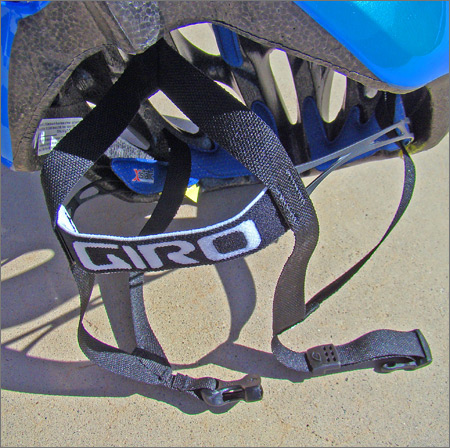 The Roc Loc SL system should have been called the G-String… It’s basically a thong on your head (which, if you know a few folks at Giro, probably explains where the idea came from). It’s an elastic strap across the back and minimal plastic side stabilizers.

“String” is also a closer description than “strap” for the chin wrap material. It’s virtually half the thickness of the straps on most lids. 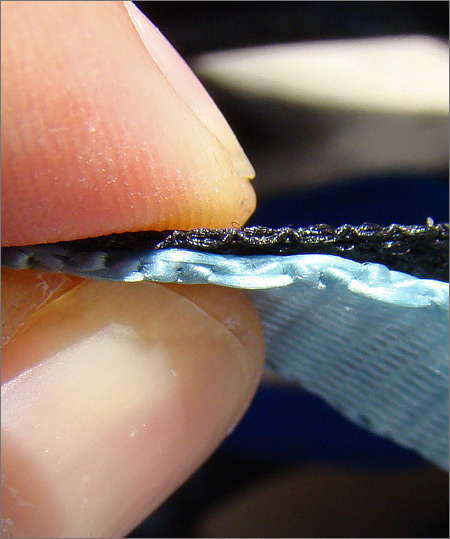 But while it’s feather weight and thin, I would guess that you could tow a small car with a short length of it. It’s certainly more than strong enough to serve safely as a bicycle helmet strapping material. 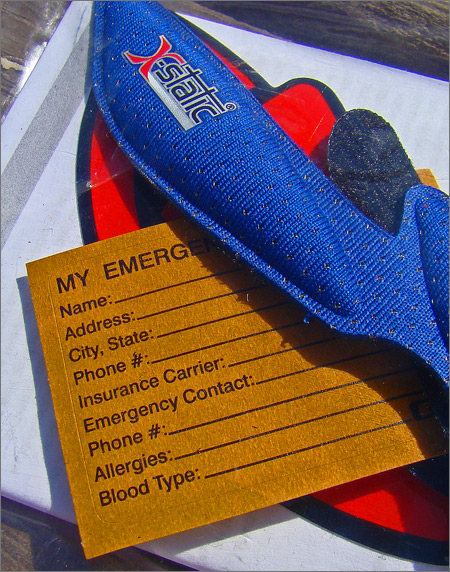 NOBODY SHOULD RIDE WITHOUT ID… 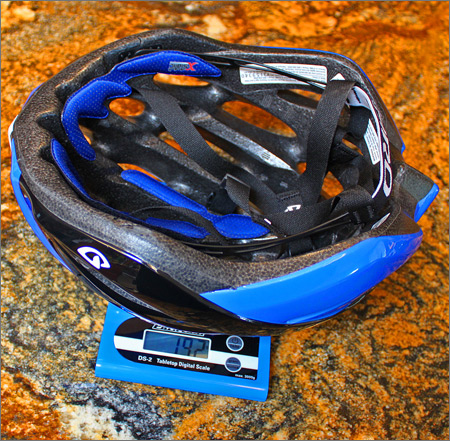 This thing feels somewhat like a cap on your head. Honestly I almost feel a little naked with it on. If I don’t wear a sheer helmet liner and the wind is blowing on my bald bean, it feels even more like I left the house forgetting something.

The venting is simply not as good as the Atmos and Ionos from Giro, but it’s as good as a few other company’s top tier lids and I had no trouble wearing it this week end here in Phoenix in 100 degrees… I would have preferred more venting, but for those of you not routinely riding in extreme heat like me, I don’t think you’ll suffer using the Prolight. If the Atmos is a 10, this one is an 8.5+ and team riders sponsored by Giro are choosing the Prolight in some pretty hot climates despite having a choice between this and other lids in the range. (And no, I don’t think Giro tell Contador he can’t have an Ionos if he wanted…)

The Retention system is a trade off. There is a tension adjustment that allows for a more or less snug fit. 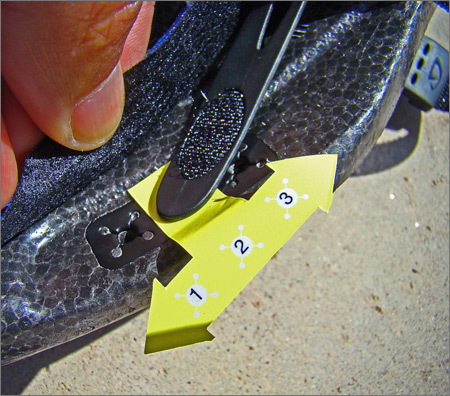 But the chin strap only adjusts for length and not position. There’s no moving it further forward toward your chin or back toward your neck.

That said, I had 4 other people try it on that wear the same sized lid. Two needed no adjustment at all, the third used only the internal snug-adjusters to let out a little tension (I do think the shell size is a little tighter on the Prolight so you should try these one to make sure you have what you need). The fourth person felt like they wanted to adjust the strap more toward the chin and couldn’t. That person felt OK, but would have preferred to move the straps.

The head shape for this seems to be pretty neutral as well. I have a friend who always used other brands because his head was more round than mine, but the Prolight agrees with his bean.

All that said, I think people should try these on. If the retention system suits you, I think you’ll like it. I would guess most folks find it fine without adjusting.

You’ll see these on the shelf for some place around US$199.00 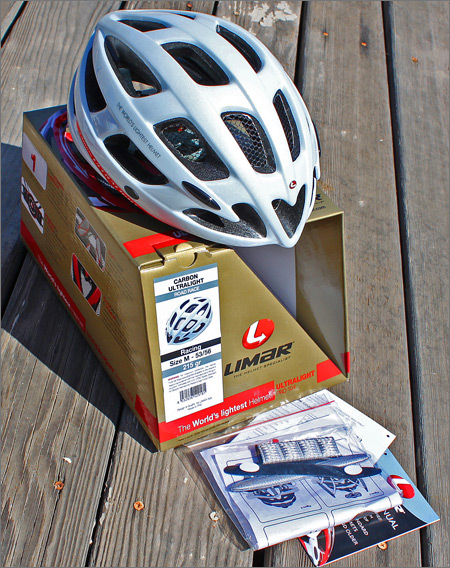 Limar have had their “World’s Lightest” racing lid on the market for a while. Long enough that North American weight weenies were being driven to order “novelty” versions from European web sites…

That’s no Longer necessary as they are now on American shores and available through ALBABICI, KHS, SINCLAIR IMPORTS, Hawley Co.

The Pro 104 is an even more low profile shape than the Giro. Also tidy front end. 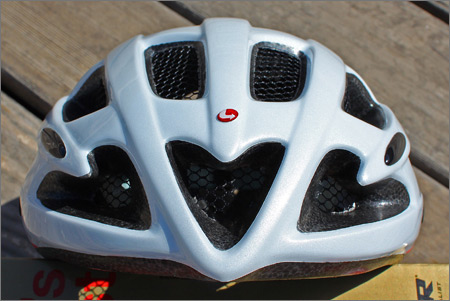 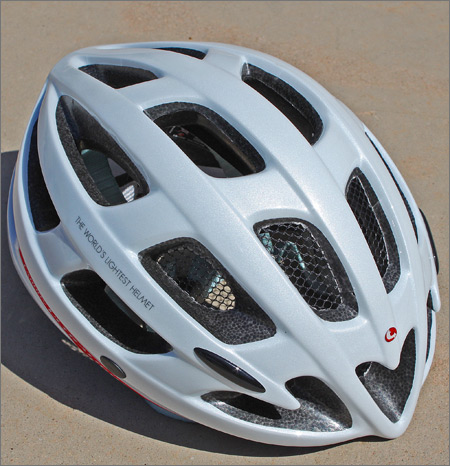 And a very sleek rear end. 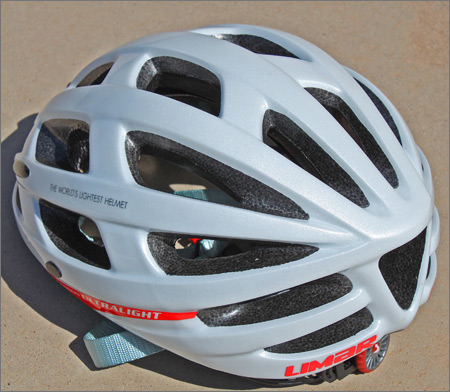 Notable too is the bug catcher screens across the front. 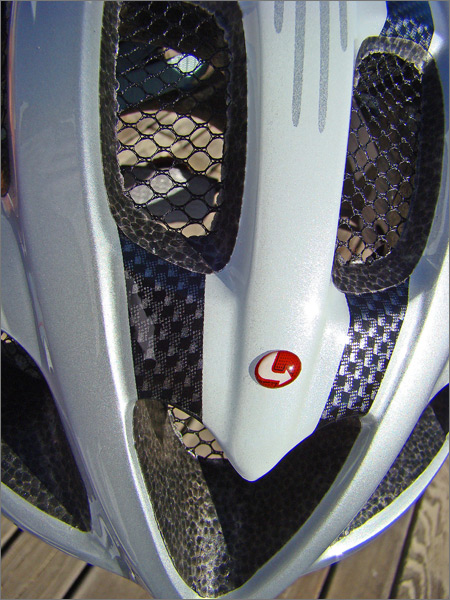 It’s a relatively strong mesh fiber that is in-molded and serves not only to stop stingers but to hold the helmet together better under impact. That allows for the Limar to have an even lower profile on your head as a bit less foam can be used in this critical impact zone. 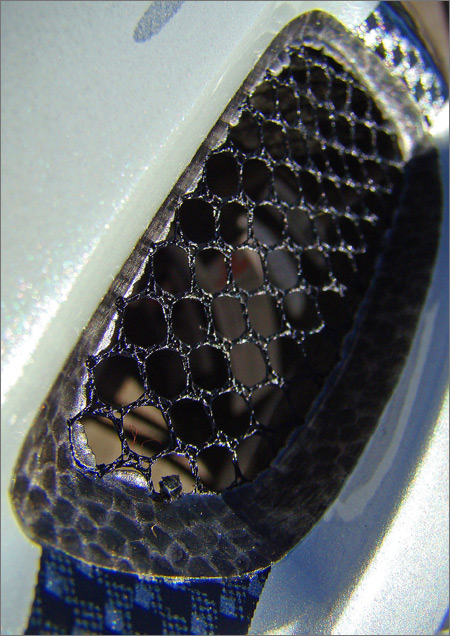 Limar have very slight channeling /shaping on the inside. The rely more on the support padding for space between head and helmet from front… 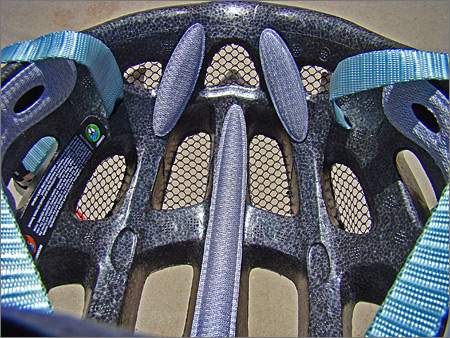 Through and out the back… 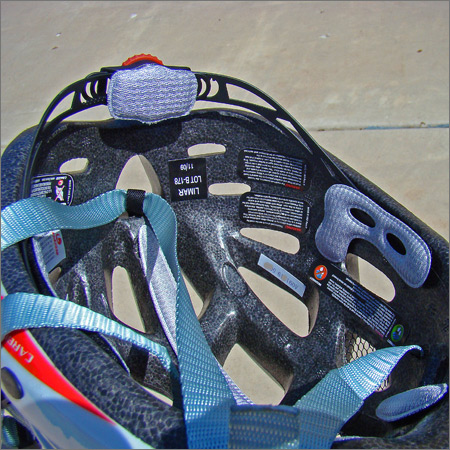 The vents are well placed and lined up fairly well and the internal pads actually do a reasonable job of creating space, but the head on top lit view here is pretty dark in the holes because there’s little channel depth between the vents to let the light (or as much air) through. 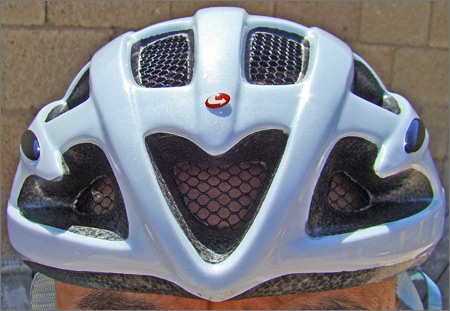 The Caliper shows a channel depth of just 2 – 3MM. 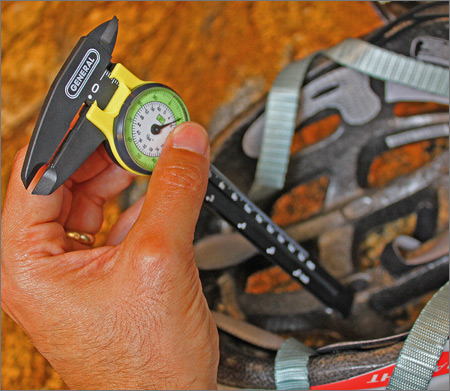 The Limar does feature a fully adjustable retention system that is exceptional at this low weight. 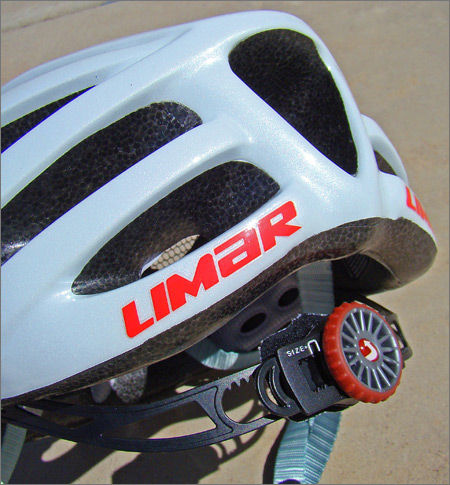 An easy to reach, VERY easy to adjust ratchet at the back makes snugging up as simple as can be. And the small, padded single contact point is minimalist comfort while being nice and secure. 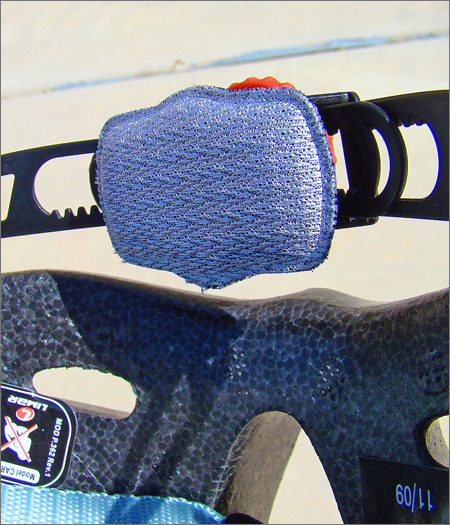 The chin straps are also fully adjustable front to back, as well as tight and loose… 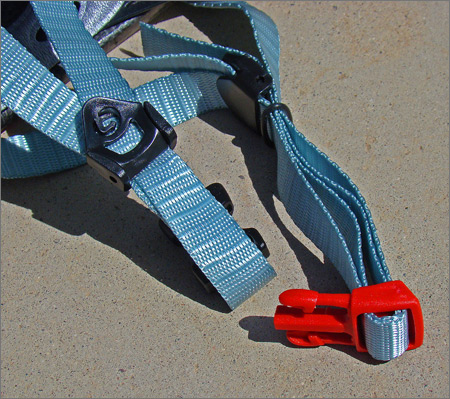 This will allow you to position them relative to your ears and chin exactly as you like. 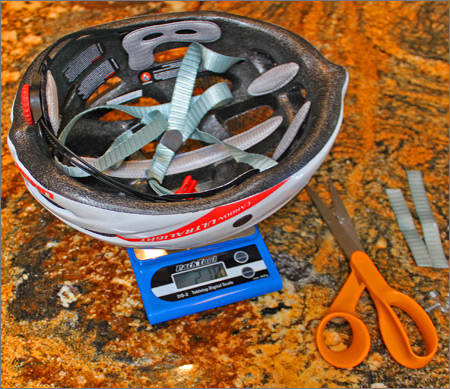 210 Grams makes this the worlds lightest “fully adjustable” helmet… (this month anyhow, as we all know the Tour is just around the bend).

The Limar Pro 104 disappears on your head in a way that makes me think back to the near zero protection foam hair nets of old did. I can’t feel the 20 grams difference to the Giro.

The retention system’s adjustment will please most as it’s very much what you would expect to find on a “normal” helmet weighing 25 – 50% more.

This is also very likely the quietest helmet I have ever worn. I would also guess it has exceptionally low drag at speed by way of a refined shape and that same lack of wind noise…

Those two plusses are related fairly directly to the venting and it’s here where I would say that people in extreme heat should look elsewhere. There’s reasonable venting through the holes and radiant heat gets away from your head well, but the lack of flow through venting is notable, even with my complete lack of hair, despite the space provided by the padding. The Limar is fine for most folks in most environments but if top helmets get a 10, the Limar would top out at 7. Suitable for lots of people and certainly doable in the mountains, but I would draw the line some place in the 80’s for best use.
Like everything from Limar, this is a solid, safety first design that should last beyond what most would reasonably ask of a helmet this light.

Another plus from the padding along with providing a bit of breathing is that it makes for a still firm but fairly comfortable contact point where it sits, front, top and back. It’s a pretty friendly helmet on your head.

The Giro is much better venting / notably more breathable, a bit lighter and its retention system is the best part of simplicity (it’s also pretty darn quiet by the way).

Both of these things are a heck of a nice relief to my head and neck over the long haul. I left it out, but both lids have anti-microbial liners. I use the term liner as loose as possible because neither amounts to much fabric at all.

Prices are generally lower for the Limar and availability is a little better in general for the Giro.

You’ll find em both at LIMARHELMETS.com and GIRO.COM along with loads of other sweet stuff from both companies.

At The Giro With My Daily Distraction