The question was, how the heck do I test a Specialized E-5 Team rig with no bars, stem or seat post? The answer came from Veltec Sports. A little box of big stuff to get the rig set right. The full bike test is coming soon, but first you gotta check out Easton’s coolest steer-gear and saddle supporters… 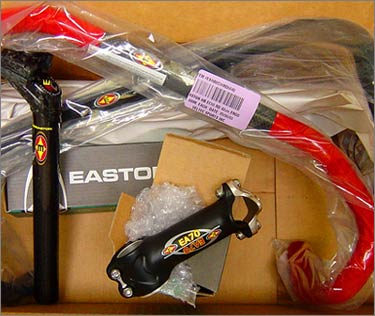 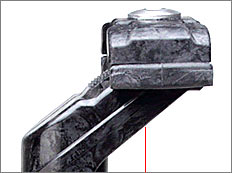 Unfortunately it only extended to 250mm, so we had to swap it for the 350mm EC70 seat post. There’s nothing that will take the chatter out of a super stiff frame like several inches of Carbon seat post! It’s also nice that there is some setback, as it helps smooth the bumps out even more. The clamp is ultra simple on both the EC90 and EC70. One bolt runs the whole show, which is something that EVERY MANUFACTURE SHOULD USE! 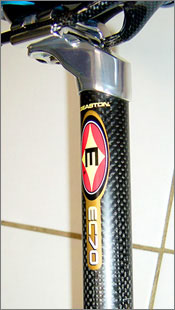 I hate over complicated seat post clamps that require you to hold one thing while turning another, while un-turning something else… Both these posts are light (155 for the EC90 and 200 for the long 350mm EC70), but the durability and design are the real juice. Along with the clamp being extremely easy, they also were thinking ahead when designing the shaft. It has a slight flat spot front and rear that helps prevent goof balls like me from pinching and cracking the carbon when tightening the set post binder. I have ruined a couple of posts that way, but have never had a problem with an Easton.

The next in the box was a way cool EA70 Stem. Again for the sake of use by the “torque challenged”, it is a two-bolt type that does a great job of spreading the clamping pressure across the face plate rather than concentrating the force at the top and bottom (what you get with a four bolt front). I like 4 bolt types on aluminum bars, as they are very secure, but I like this better for carbon, as it snugs up pretty well, but simply spreads the pressure better. 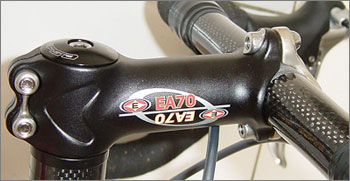 The stem also has force distribution in mind on the back bolts (no little deal with all the carbon steer tubes out there now). It features a little reinforcing bar on both sides of the back clamp that also spread the force more evenly between the bolts that hold your stem to the Fork. And last but not least, Easton finishes the inside of this stem as well as the outside, meaning that they round the edges inside to help prevent the aluminum from biting into the bars or steer tube. I have had to file down sharp corners on the inside of stems costing a lot more than the Easton, because the high zoot manufacturer didn’t feel like making the part worth the price. The stem is light too at 135 grams.

The Bars on test here were both the EA70 AND EC90.

I love the EC90 carbons, as Easton have done one thing to make them better that should also be copied by others… They reinforced the clamping area and put a non slip surface there to lower the risk of over tightening for fear of slip. 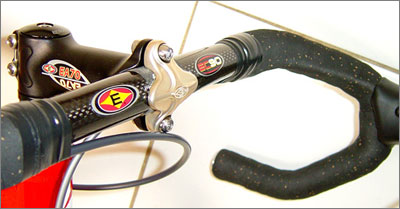 The bar’s only drawback to me is the same thing that makes a few team mates love them. They have a curved area up top right where lots of us put our hands. 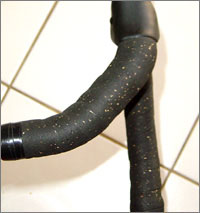 I like it because it makes em more comfortable, but it also means the reach and drop are a little further out and down than I would like. But like I said, that’s personal taste… The ergo bend in the drops is great, and these things are stiff, very light at 185 Grams and do a great job of soaking up high frequency vibration.

The EC70 Bars are very good as well. I actually switched back and fourth (thanks goes to Earnest at Bicycle Showcase in Phoenix…) and found the Aluminum bars very stiff without being harsh. They have trenches front and back in case you run Campy, and the ergo bend is spot on. 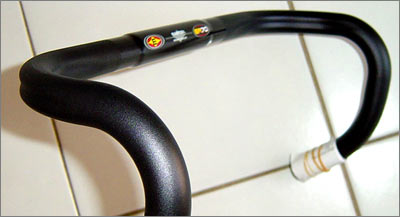 Lots can be said about the stuff from Easton. I like that they pay attention to some things that higher costing imports don’t. I also like the fact that they seem to put durability before weight concern. That’s not to say that they are not race spec parts though, as you might notice the Easton logo on the bars below Tyler Hamilton’s raised arms (and huge smile) in the loads of pictures of him winning Liege! Now that is a race slammed full of Power accelerations and also full of climbing. There is no better test for bars than LBL when it comes to requiring enough strength to get yanked hard in accelerations while being light enough to still be considered light.

Take a look at Veltec Sports site for great Easton Gear, as well as cool stuff from Look, Sidi and others…