No other bike in pro racing gets as much time lavished upon it as a Six Day machine. A good mechanic needs a couple of hours per bike per day to do the job properly. On the face they’re simple devices, with no brakes or gears to worry about. But these rigs are subject to the highest stresses with constant high speed, sudden changes of direction and those unforgiving G-forces from the steep bankings every couple of seconds.

The basic requirements of a Six Day rider haven’t changed over the years; he needs a stable, comfortable but responsive platform from which to practice his trade, it must be rigid and it must be light. Light weight may seem surprising, but a rider wanting to move-up a fast string wants the least possible mass to accelerate.

The last few years have seen over-size aluminium with carbon forks (usually straight) as the frame of choice; steel died with the dinosaurs. Hiddenset and Ahead rule the roost, even although Colnago refuses to abandon the traditional headset. 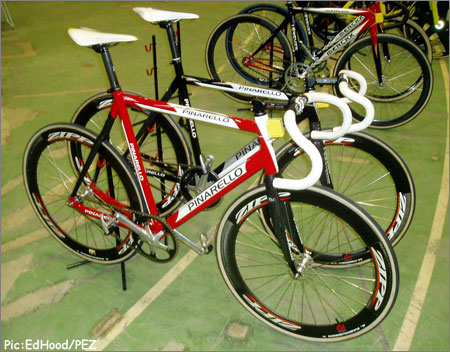 The Pinarellos of Morkov and Rasmussen. 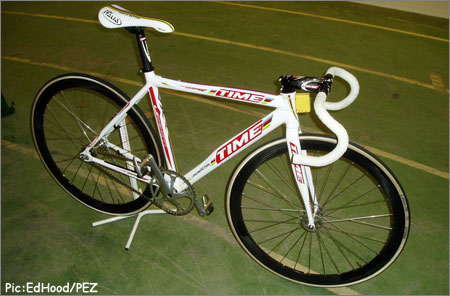 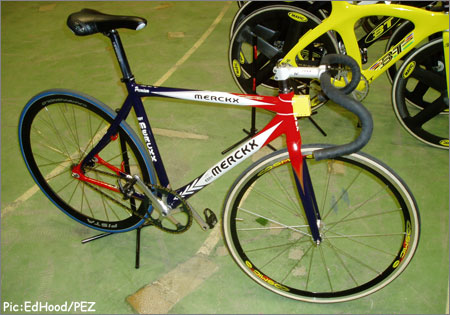 Mr. Hood is a big fan of the classic Merckx.

Classic examples of this type of frame are on display here, the Eddy Merckxs of Belgians Wouter Van Mechelen & Dimitri DeFauw; the Colnagos of Slovaks Martin Liska & Jozef Zabka; the Time of world champion Paolo Bettini and the Pinarellos of Michael Morkov and Alex Rasmussen although these are a bit different in as much as they have carbon seat stays. 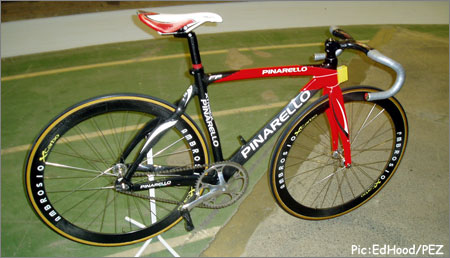 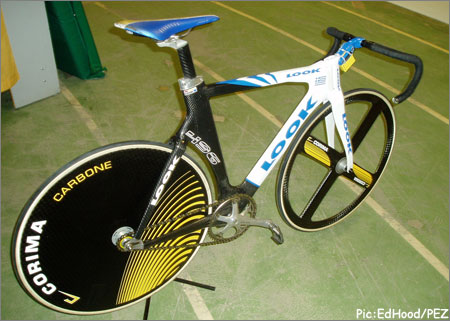 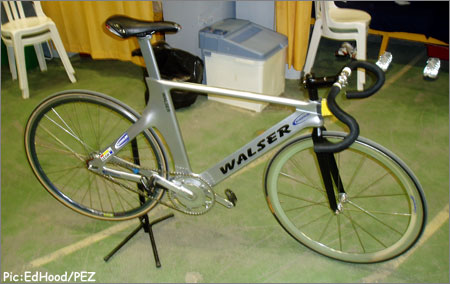 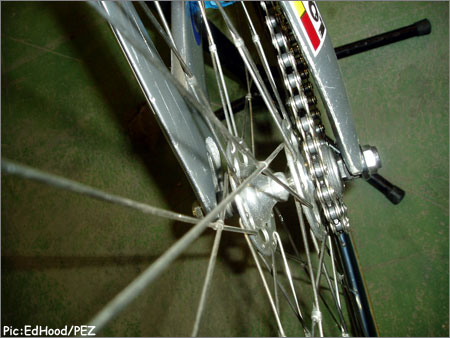 Can you say narrow? 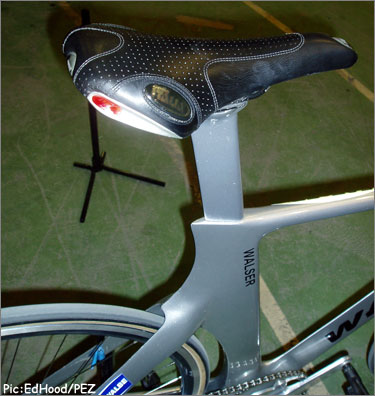 Don’t be growing or anything.

The Walsers are different, they are very narrow at the bottom bracket and rear hub to give good air-flow and have no seat clamp. The airfoil seat pillar is an interfernce wedge fit and so has to be cut exactly right for the rider. Many big names have ridden Walsers “badge engineered” to suit their sponsors, among them Jan Ulrich, ‘chrono-man’ Michael Rich and world pursuit champion, Robert Bartko. 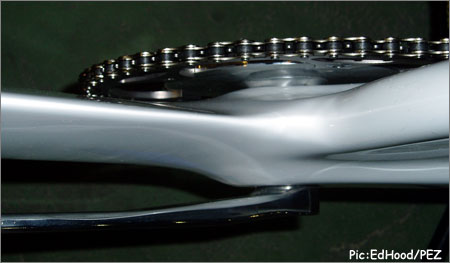 I bet you can say narrow now.

The problem with the carbon exotica is that most are designed initially with short distance work in mind, up to four kilometres. At these distances, comfort is not an issue, getting aero and putting the power down are everything. 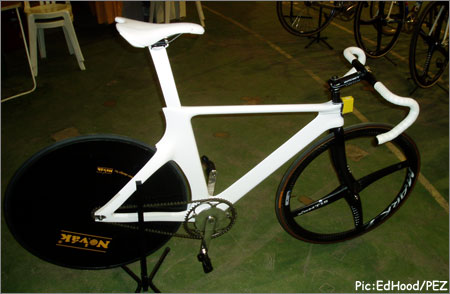 Notice the stack on the fork and the riser stem.

For madison racing a less extreme position is needed so the Walsers and BTs are all heavily stacked at the head with hi-rise handlebar stems so as a more upright position can be adopted when “resting” in the chases. BT have a new model hitting the boards soon with a taller head tube designed specifically for points, scratch and madison racing 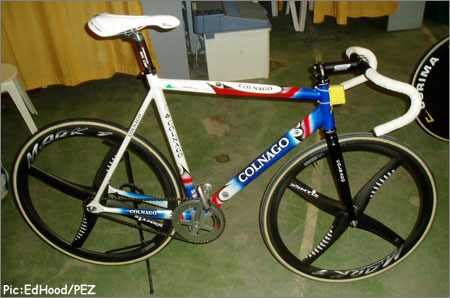 Wheels too have moved into the 21st century, composites rule, spokes haven’t disppeaered all together but there are fewer of them and they are usually laced to carbon rims. Deep section Zipps built to this recipe are the choice of our Danes whilst Franco and the Slovaks are on full composite, four spoke Xentis wheels. These are light, cost effective and aero but I’ve heard it said you are best to replace the beariings with Campag. The “Daddy” of composites is the Mavic five spoke, generally the property of national federations at 2000 euros each. 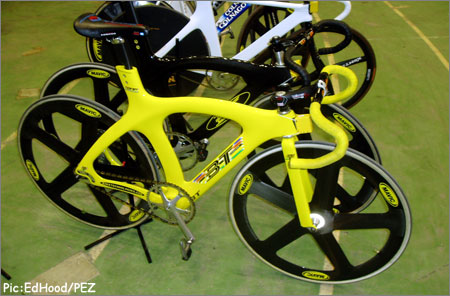 The BT is of course as fast as they come, but those Mavics don’t hurt anything.

Rubber is all tubular – by Continental and Schwalbe with the odd Vittoria. I noticed though, that Bettini is running 150 euro a pop Dugastes, the fastest you can buy – but they won’t take you much further than 150 K

Apart from Walsers own-make, ugly but super-stiff cranks it’s Campag and Shimano providing the transmission. Chains here are all 1/8″ pitch but my buddy Stepano tells me that the Spaniards Llaneras & Galvez were running 3/32″ at Amsterdam; they think that it’s easier on their legs.

Pedals are all clipless with Shimano perhaps the most popular.

Bars are “square” and shallow road pattern; Ahead is universal now. Marvulli is one of the few riders who favours ergonomic bars; tape goes right up to the ferrule for those hand-sling changes. 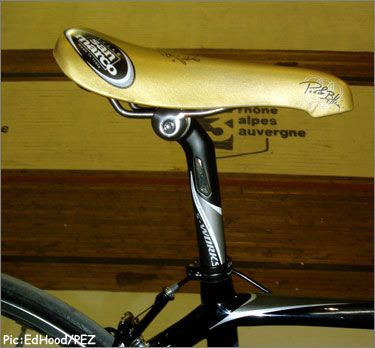 It’s all traditional for Paolo Bettini’s point of contact.

A bad saddle sore can end a rider’s career – ask Peter Post so there are some real “old faithfuls” on dispaly, Rolls being one of the most popular.

My favourite? It’s hard for me to go past the Merckx.