Inside Selle Italia: Hard to Find, Impossible to Forget

Chasing the Giro isn’t just about following a great bike race – it’s also a perfect chance to visit some of the companies who make the tools of our sport. My recent visit to Selle Italia – famed saddle makers was both a welcome change of pace from the Giro-chase, and a chance to see how these famous saddles get made…

I’d never seen how saddles are actually made, and admit I’d never really given it much thought, but as my meeting with Selle Italia drew closer, my mind began to fill with wonder… 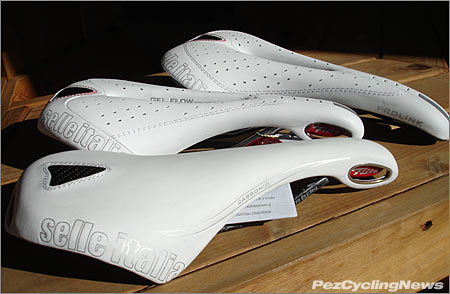 New for 2007 is a redesigned ‘Flite’, and a new bigger bolder brand name on the side of every saddle.

My 6:45 wake up call never came, but I was awake anyway, and by 8:00 AM
was packed and out the door enroute to Selle Italia headquarters in Rossano Veneto, not far from Bassano del Grappa. Armed with printed Michelin directions, and a back-up set given personally by Steve Merlini – Selle Italia’s World Sales director – I was sure that even the promised 15 minute drive would not take more than a half hour. 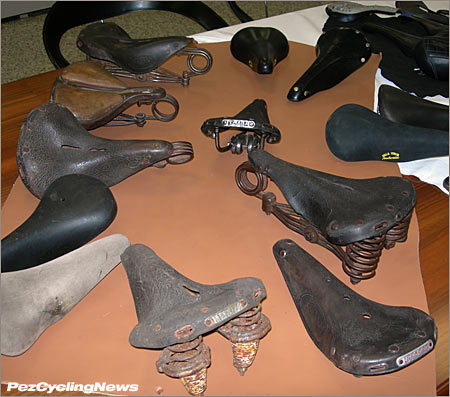 The far end of the huge boardroom table was covered by historic saddles made by Selle Italia. Some of these were ancient, and I imagined had seen battle in some of the earliest Tours and Giros.

But this is Italy – and things like finding your way to new places always take longer than they should. A couple rules of travel in Italy I learned from many visits:
1. Every trip will take at least one hour. Even if it’s just down the street, allow 60 minutes for any travel by car.
2. Plan on taking at least 1 minute to travel each kilometer of your journey – no matter how far, or what type of roads are involved, experience has proven that average speeds of travel are 1km per minute. 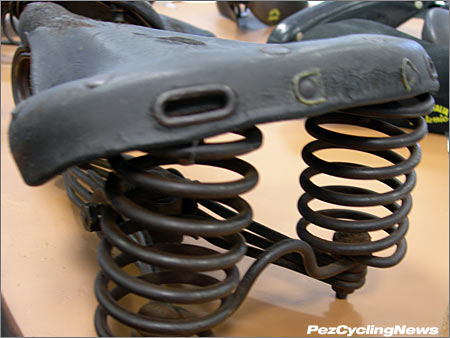 Apparently back in the day, weight was given secondary status to adding springs to cushion the ride (‘cushion’ being a relative word).

So less than 5 minutes after leaving the hotel, I was onto unfamiliar one way roads and cognitively off track from both sets of my directions I had. Five minutes after that I was lost. At least I knew I was lost. And at least I was born with a pretty good internal compass. I knew what general direction I had to go, and I knew the approximate distance, so I was confident I’d sort this in short order.

After weaving my way from village to village in a generally southeast direction, I knew I was getting close when I passed a Selle Italia van heading in the opposite direction. An unexpected hard u-turn later and a few more minutes of zeroing in, I found myself at Selle Italia- only 30 minutes after my appointed arrival – but a full hour after I left the hotel. See what I mean? 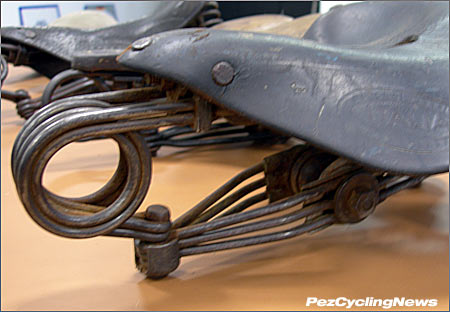 Apparently some saddles were used as torture devices. One wrong step here and it’s game over.

IMPRESSIVE PALMARES
Few saddle makers can offer the history and palmares of Italy’s Selle Italia – a connoisseurs brand, if you will. It’s a safe bet that visually everyone of us has ridden on one of their saddles at some time.

The stats themselves are enough to inspire impressed chin rubbing:
• The company was founded in 1897 – that is 110 years ago!
• 1970 – First to use plastic shell on bicycle saddles
• 1974 – Introduced foam to replace hard leather covers
• 1979 – variable thickness on saddles shells to increase flexibility and comfort
• 1980 – Turbo launched – first with anatomic contours
• 1984 – Patented shock absorbing pads between rail and shell
• 1987 – First lightweight hollow rails patented
• 2004 – Axiol Pivot System introduced on Signo models 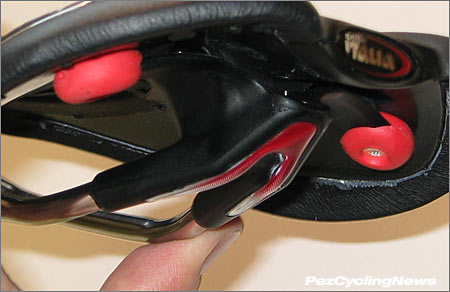 The Signo saddle ‘pivots’ from side to side where the rails meet the shell at the rear – a comfort enhancing innovation. 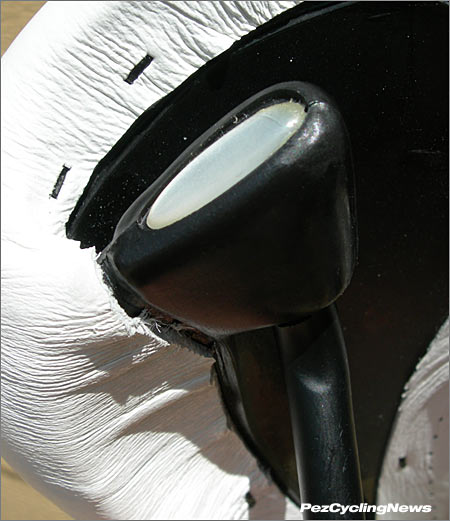 The gel bumpers between the shell and rails are another Selle Italia patent. 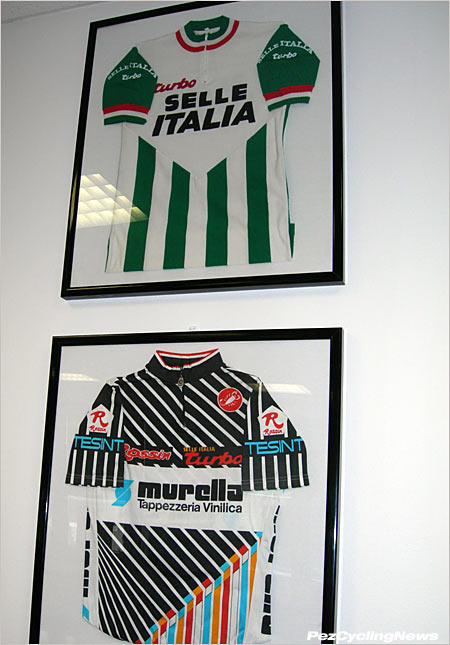 Like so many Italian cycling company offices, Selle Italia’s boardroom is adorned with an impressive display of jerseys. I sure do like that striped one.

And some more impressive stats you probably did not know:
• They supply saddles to more than 200 OEM brands worldwide – so you’ve probably ridden a Selle Italia saddle without even knowing it.
• 100% of their production is handmade in Italy.
• The made over 2,100,000 saddles in 2006 – more expected for 2007
• 89% of their saddles are exported worldwide 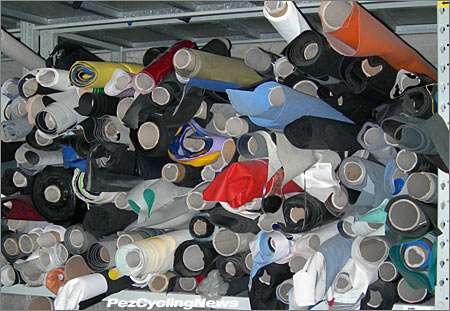 • Rolls and rolls of sweet smelling leather. When every saddle you make is covered in genuine leather, you need to keep a lot on hand. This was just a small part of the leather room.

In spite of their grand reputation, the office is housed in a non-descript business park near Bassano del Grappa in Italy’s Veneto region, and the only sign of cycling fame in the area is the Selle Italia marque on the building – and even that you have to look for. Their lack of unnecessary pomp and fluff says a lot about their focus.

NO HOTTIES REQUIRED
A glance through their online advertising gallery reveals none of the typical Italian style of promoting products – I could not find one ad since 1985 that used even a single frivolous babe shot. It’s standard practise in Italian advertising to include a beautiful woman in your advertising, regardless of relevance to the campaign or product – and Selle Italia’s lack of this ‘staple’ speaks volumes about their commitment to the quality of their saddles. 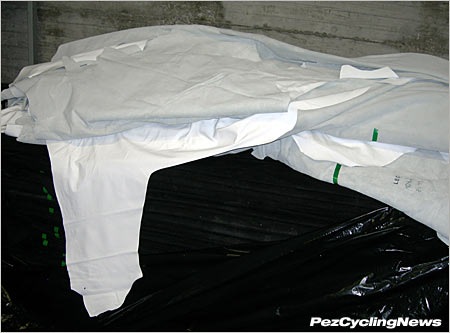 • Leather is purchased as complete hides, and cut to size for each model.

My tour started with the company’s senior execs Steve Merlini and Ingrid Bordignon in the boardroom – which looks like a lot of European cycling company’s – stark, clean and white, distinguished by an array of Selle Italia jerseys on the walls and historic saddles placed at one end of the long boardroom table. It’s soon obvious that the flash and dash goes into the saddles – not the surroundings. 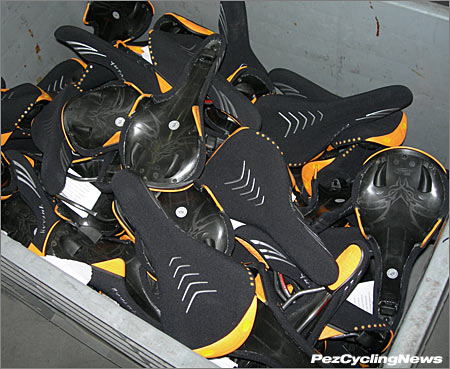 I was initially most interested in seeing the production process of arguabley the most famous saddle maker on the planet. But when Ingrid began explaining the process, my anticipation changed from what I was hoping to see, to appreciation for how this company maintains it’s high handmade standards, and employs many people in the local area, while producing a staggering amount of saddles – 9,500 a day to be exact! 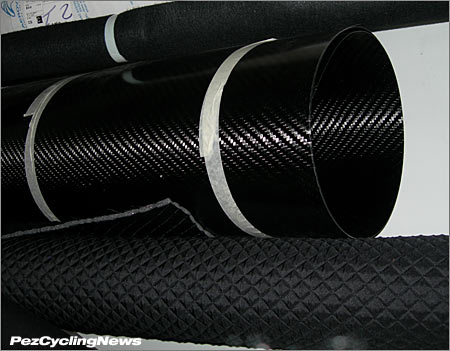 • Alongside the leather you can find rolls of carbon fiber sheets, ready to become the shell of your next saddle?

While each and every Selle Italia saddle is finished and boxed at this facility, production for each saddle stakes place in stages at various locations in the area. 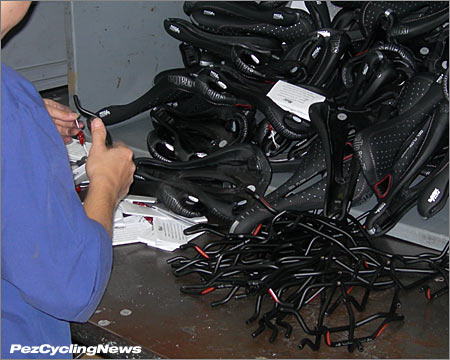 • Rails are attached to saddle shells in the factory.

Italian employment laws very greatly from North America, and many companies find it makes more sense to work with sub-contractors than to take on the high cost of employing its own work force. So Selle Italia works with several sub-contractors – many of whom are families – each responsible for a specific process in the construction of each saddle. 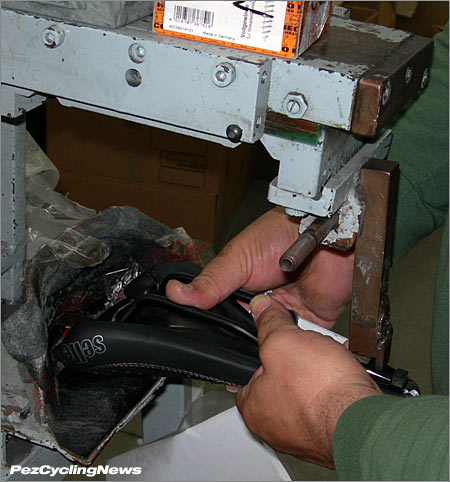 • The rails are pressed into place on this machine, which presses the nose cap into place.

Saddle shells are formed at a factory Selle Italia owns at another location, as are various individual parts. The parts are then stock piled at this office or shipped directly to the various sub-contractors in the area who each perform a specific function in the saddle making process. 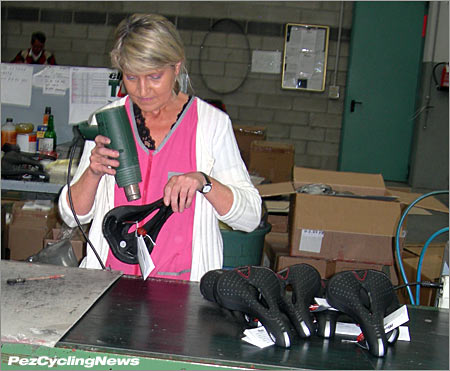 • Hot air is used to set the glues in the last step before boxing.

For example, leather covers are cut and stamped with the Selle name here, then shipped with shells to a sub-contractor who stretches and attaches each cover to a shell. These are then shipped to the next contractor for the next step in the process. Finally, name badges and rails are attached and glued back at homebase, then it’s into boxes and sorting for worldwide distribution.

INTO THE TEST ROOM
One of the most impressive parts of my tour was the ‘test room’ – it’s exactly where each model is tested to meet the company’s safety, durability, and strength requirements. 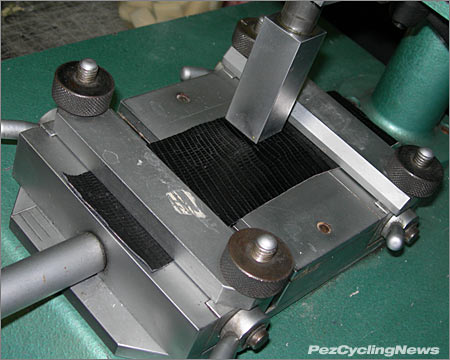 • Leather is tested here to ensure durability meets their standards. 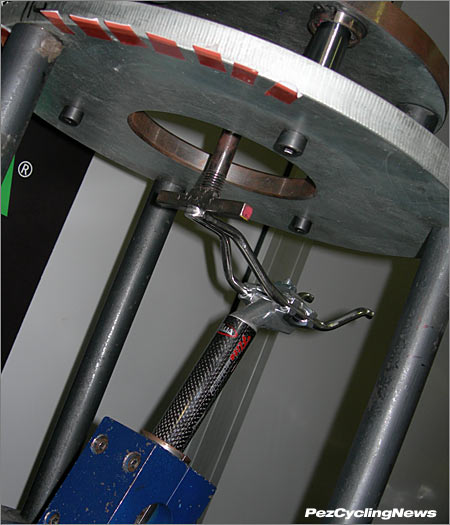 • Rails are tested for strength and durability on this machine that essentially hammers ‘em with various weights. 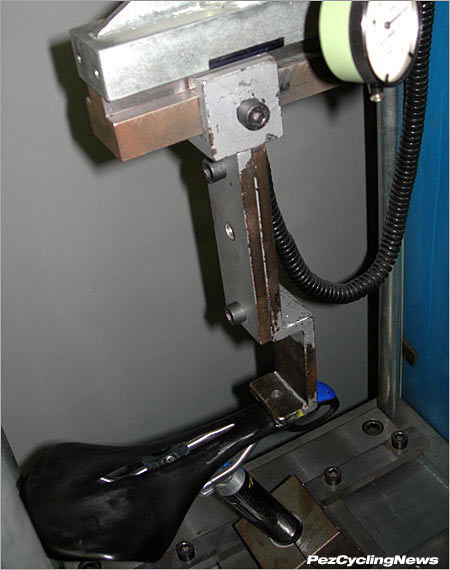 • Saddle covers are tested here, by measuring deformation after impacts from various loads. 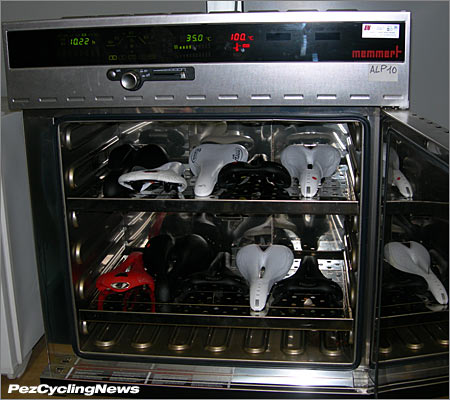 • The Oven – you guessed it – nothing like a little heat to find the breaking points for materials and adhesives. It’s also great for toasting up those lunchtime paninis. 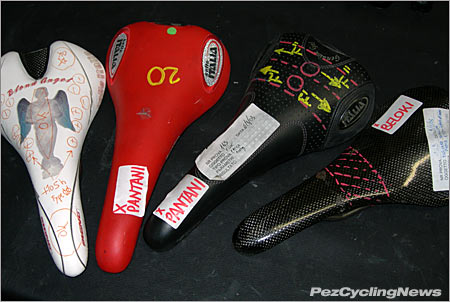 • In an old carboard box in the test room is a bunch of old saddles from various ‘testers’… check out the names on these ones. Some famous butts were here. Pantani, Ullrich, Rebellin… the list is long. 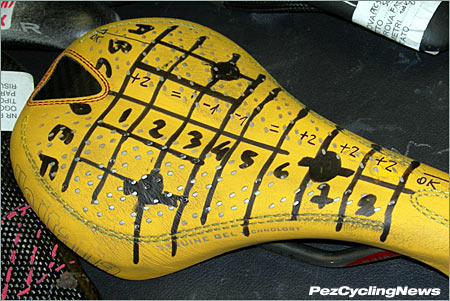 • A number of the test saddles were marked with these grids – used by riders to identify specific areas of pressure, or places to modify shapes. As unscientific as it might sound, when it comes to something as personal as how a saddle feels – is there a better way to gather rider feedback? 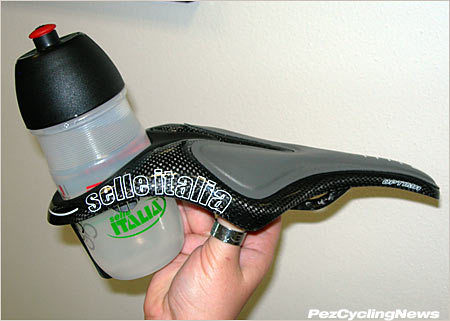 • Coming soon to a bike shop near you – the all new, mostly carbon tri- and TT- saddle, which incorporates a moulded-in bottle cage designed to smooth airflow at the rear of a rider. The rails are also made to allow a more forward position on the bike. 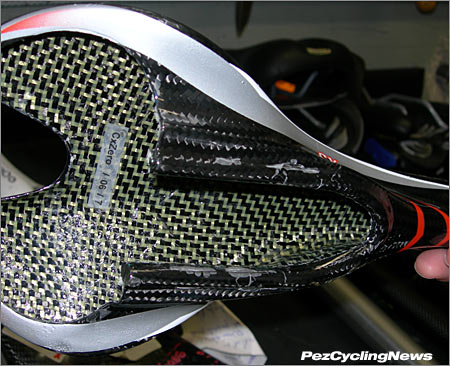 • Still in development – a new take on rail design – just mold ‘em into the shell. 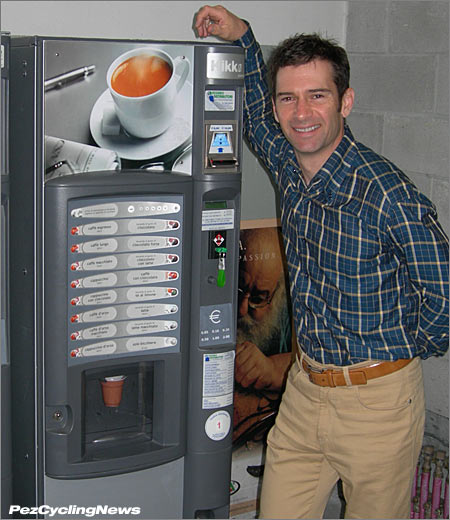 • Now this my friends, is office coffee unlike anything you’ve tasted before, unless you work in Italy. 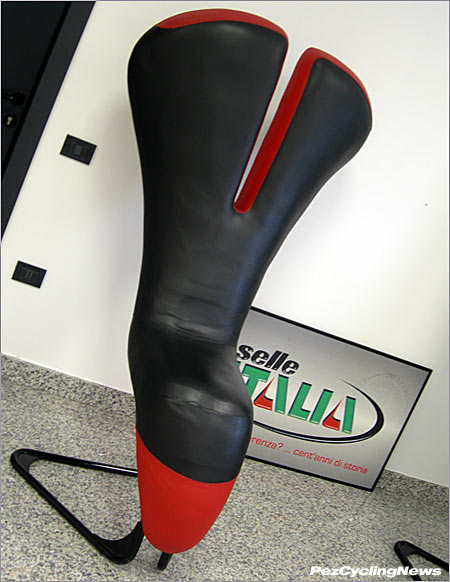 • Can you imagine the discussion that led to this…? Me neither.
Coming to a trade show booth near you…

By the end of our tour, it’s clear how serious these people are about making bike saddles – and not just the head office folks. Their system of working with local families who are essentially artisans of saddle construction is the perfect set up to produce an astonishing volume of ‘hand-made’ product. Their designs and innovations over the years also remind that resting on their laurels, no matter how impressive (with countless Tours, Giros, Classics and World titles to their credit) is not an option.

Before I left, Ingrid handed me a brand new Flite – in hard to get white, and asked for my feedback… cool. One thing is for sure, I won’t be forgetting Selle Italia any time soon.