With just a few more of these Vegas display gigs left in the pipe, we thought we would hit another good round of bikes from the floor.

Leading us off are the folks at Seven Cycles with the latest version of their custom Carbon offerings.

My favorite is the V-II. 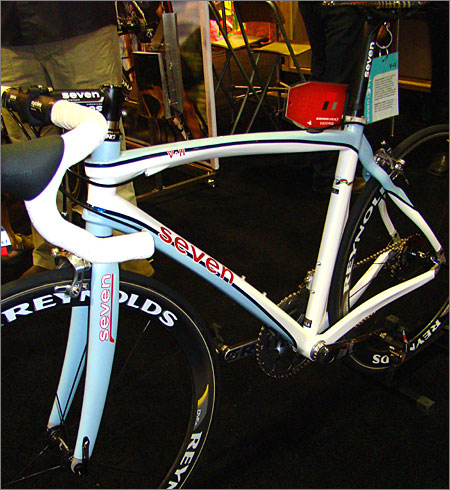 Seven have busted ass in trying to create a carbon frame with a combination of full custom fit with an exceptional level of durability. 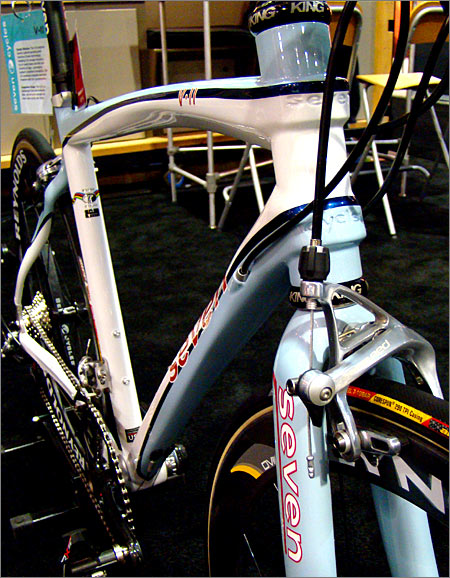 As is plain to see, the V-II shares some similar tube and joint tech with the Daimas… 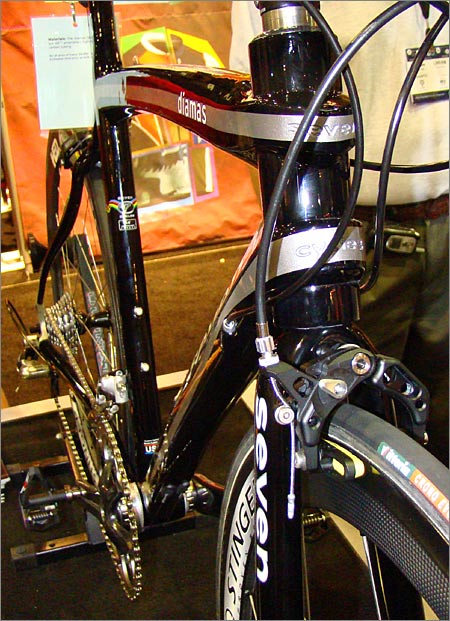 As both bikes feature Seven’s CTP (Carbon Technology Platform) that works to maximize contact area for bonding and build while maintaining complete flexibility in geometry. Where they differ is easily recognized in tube profiles, and in the different carbon types used to tune the ride… 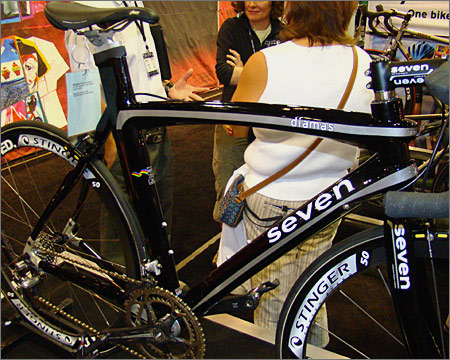 Also in the custom game, all be it in far lower volume are Temple Cycles. Every year I come to Vegas, I love to see the “implants”. And one variety that always seems to please is the bikes that Temple, as a super high end, super low volume company, work into displays at booths for several companies around the show. 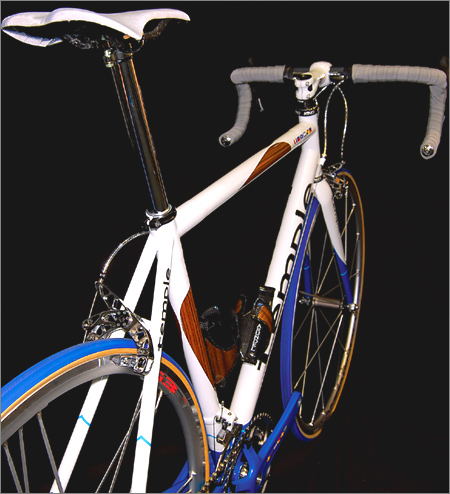 This one features real wood inlay (that’s not a sticker…) as well as some detailed but discrete custom painting so cleanly done that it honestly pisses me off… I simply won’t duplicate this detail level on my own, so I’ll stick to the more standard “dazzle and dash” color schemes. 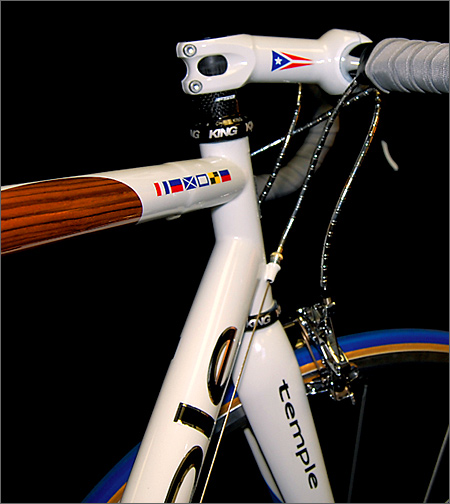 A bike we haven’t heard a lot of buzz about, but that nobody could seem to walk past without a look was also custom carbon in Carrera’s Phibra… 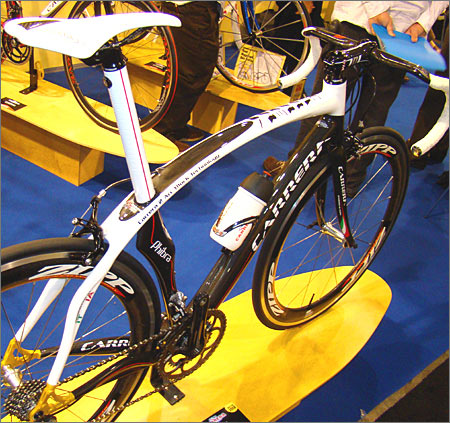 Sure it’s an attention getter, but what very few folks realized is that this is not only an eye catcher, but is built in a process that allows Carrera to fit these to measure… It’s built in Italy to order by Carrera and while it will certainly cause some polarizing opinion on design, one thing’s certain, it does have a special look. 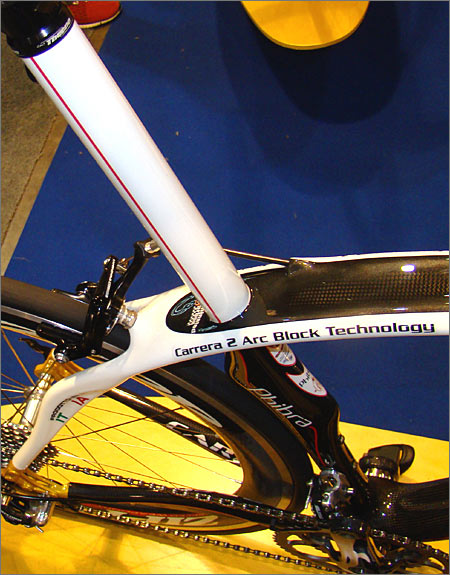 Next stop was another Custom Builder, our friends at Lynskey Performance.

The first thing that caught my attention wasn’t actually the sign on their booth. In fact, I was already in the booth before I realized I was at Lynskey because my eyes were fixed on something decidedly non-road race, but simply the sweeter for it. 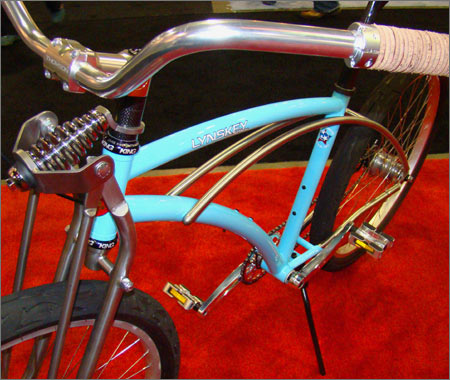 The cruiser reminded me of Lynskey’s southern roots and the girls from that part of the country that broke my heart a dozen times (knockouts without the need for make up or fancy clothes that used to create nothing but the best kind of trouble).

They also knocked out a bike that was damn near impossible to photograph well. 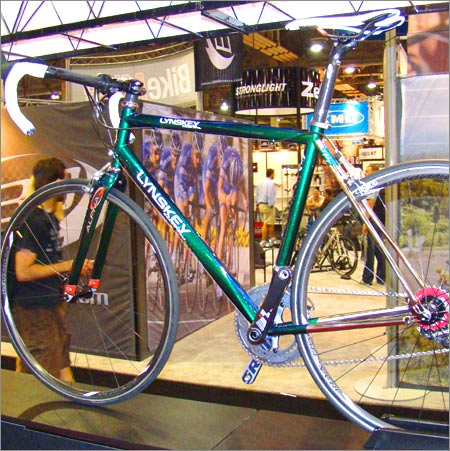 But get up close and this thing had some incredible tube shaping going on. 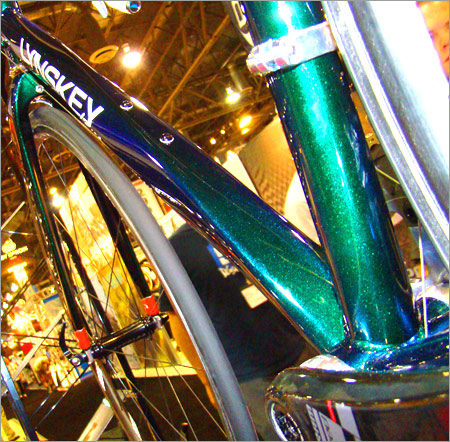 And the paint was both incredible and baffling, as several profiles within a single tube combined with the pearl color movement to make the bike look like it was actively changing shape while I walked around it.

A bike that didn’t need any help changing shape at all was Specialized Bicycles’ new TT rig. 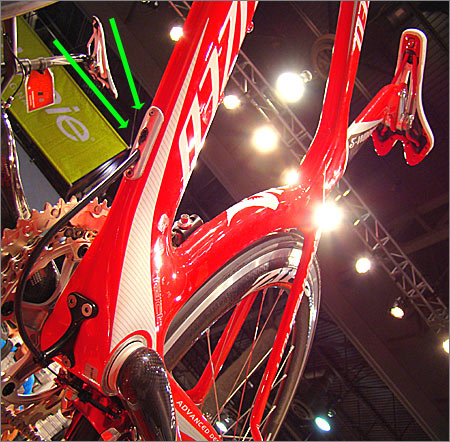 Specialized chose the same color as Parlee for the flagship watch stopper, but the designs clearly come from different schools. 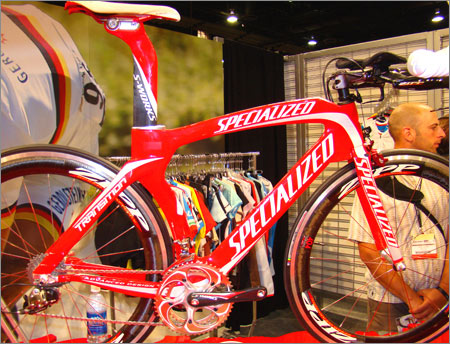 I think I counted 4 straight lines on the “Transition” frame as it swerves from one section to another like nothing in Time Trial frames has before. Nice that you can get a version of this bike built too for around 3 grand, but that, as much as anything else is an example of the horsepower the big “S” brings to the game. 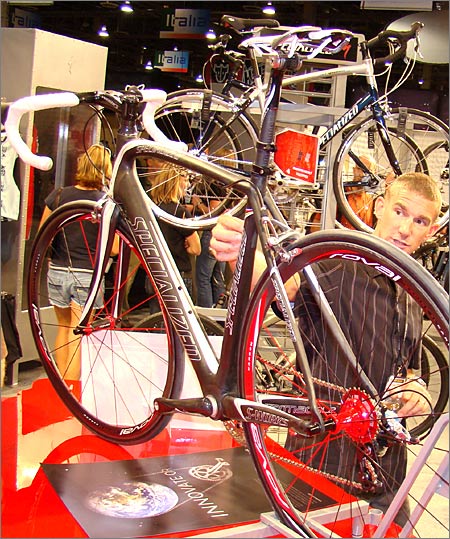 Some nice design features here that are understated as Specialized go making this as close as the company has come to a “stealthy ninja” bike in years. Several design cues, but along the Ninja lines are easily the throwing star shaped rings on the FACT carbon crank set 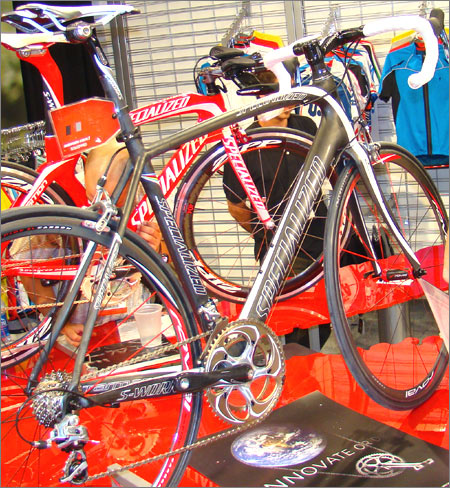 This is the companies first year on the floor, though co-founder Dan Barnes probably hasn’t missed a show since, well, ever. And I was hoping to find them having some interest. As I walked down their row, I was trying to see past a big crowd of people blocking the aisle and get a look at their modest booth, only to discover the big crowd was spilling out of their booth… Busy was their thing the entire time and in 2008 they added a new range topper, the 300 SE. 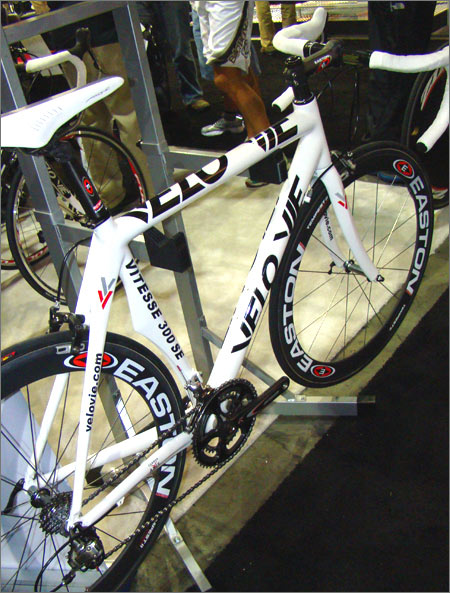 A lot like the Vitesse 300 that we reviewed, except their maniacal minds decided that higher mod carbon, a little less weight and even more stiffness could still be had for less than 2 grand… 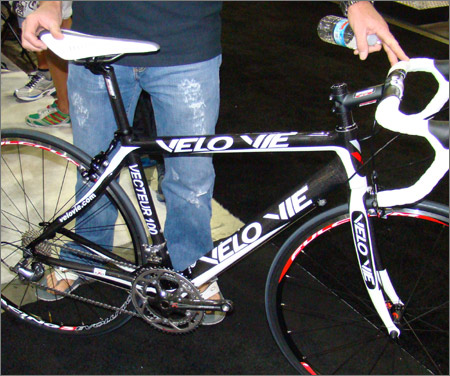 And again the last bike for today isn’t really a road bike (though Canyon make a very good one). But then again, Bobby Root doesn’t care what a bike looks like… 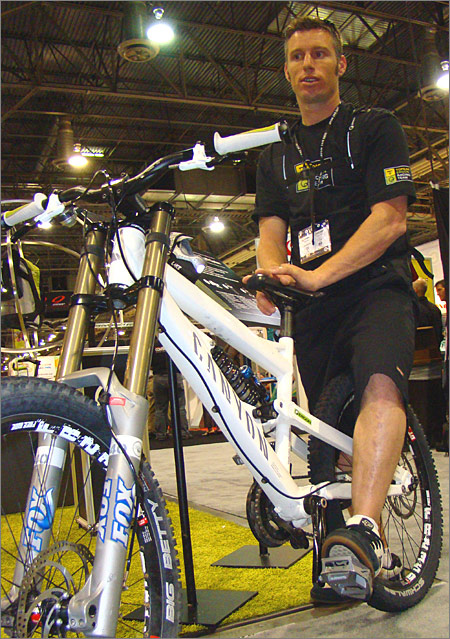 He’ll do things on the road that will simply drop your jaw… In fact, line him up at your next town Crit on a road bike and unless it’s loaded with Pros, you may as well use the start gun as your signal to pack up and go home. Add to it that his favorite topic is the family / kids and that he was probably the nicest guy at the show and poof… He’s on Pez. Nice meeting you Bobby.