Although we said Interbike didn’t have a whole lot of special stuff, we changed our minds a bit after taking a peak at 400 or so pictures… Rather than forcing you to look at 47 pages of crap (so that you absorb none of it…) we thought we’d condense it to a few of the show’s best.

We’ll start where I started at the show. The 9:00 am bell went off announcing the opening of the flood gates to the show floor and on our way back to the first meeting of the day, the first picture at Interbike was this one. 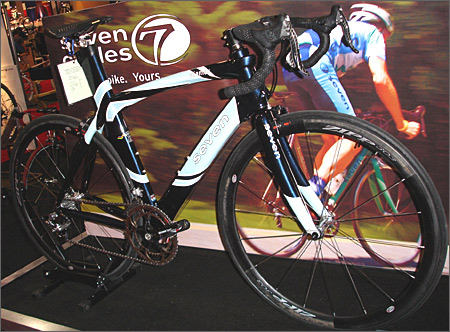 Of course it was one of the poorer pictures I took, but bad photography means you’ll have to take a peak at Seven’s web site for a better view or two. We sat down with Seven’s folks a day later and also got in a few words with Rob Vandermark about the new custom carbon Daimas. Unfortunately the details were all of the “I could tell you but then I’d have to kill you” type, and as he was wielding a set of unused handlebars and sporting that kind of glazed “trade show” look, we left well enough alone…

The next stop was over to Veltec Sports for a round robin chat with managers of several major lines. One of which was Look. Now we just finished testing the Look 585, so it was no big shock to see this one hanging with a bit of the “software” included with it’s 2005 tour performance… 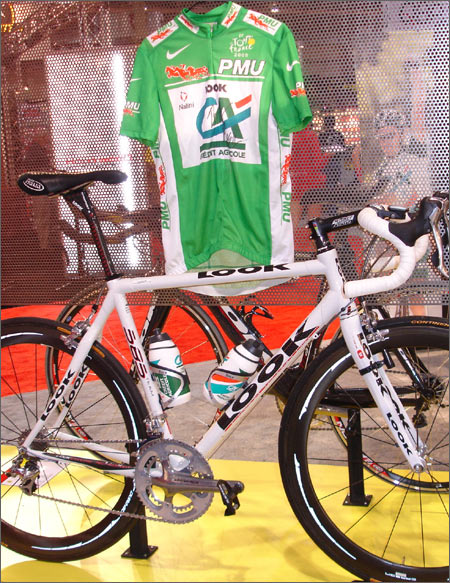 They also had their new TT bike on display and there are a host of features to be found on what is a far better looking bike up close than it is on paper (or plasma). 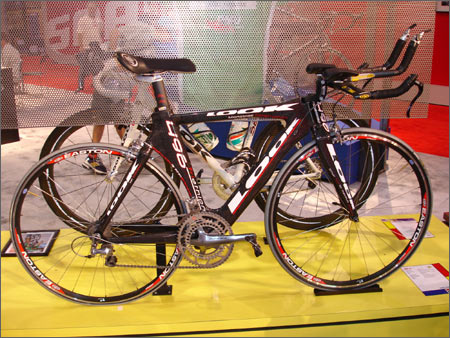 A bit later it was a stop over and chat with Ernesto and the Trialtir folks, showing Colnago’s latest renditions in Carbon and color… 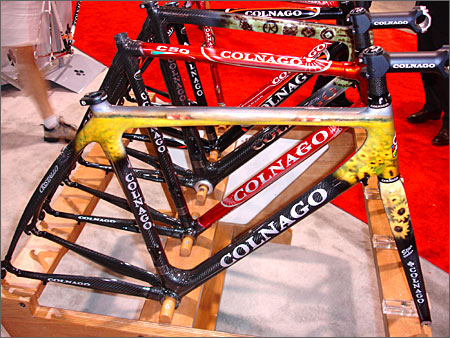 The paint schemes range from almost nothing to off the charts sunflower graphics, as Colnago have a few new bikes this year. Along with Mountain and Track stuff, there was a Cross machine that looked far too damn nice to get any place near mud, but the bike that set me off the most is rumored to have a (Ale’) Jet up front for a reason, as it is a reinforced for sprinting bike that might wind up under a certain Italian fast man next season. 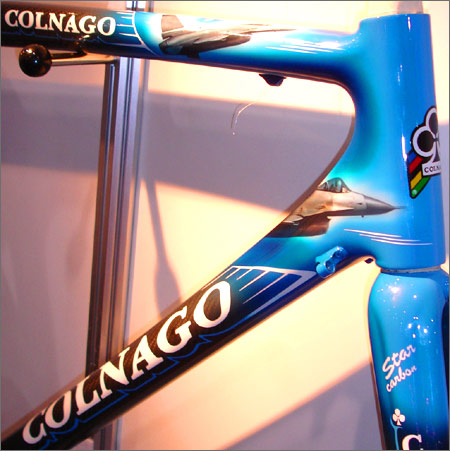 From there we kept the Italian theme rolling over at De Rosa. They also featured a sweet enough Cross bike that I might consider actually doing a bit of hop-skip-jump riding this year. 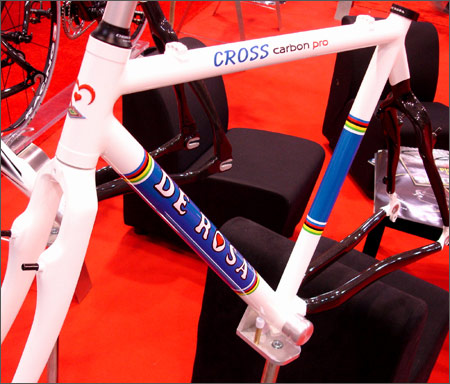 They also get their Swerve on with the new Merak 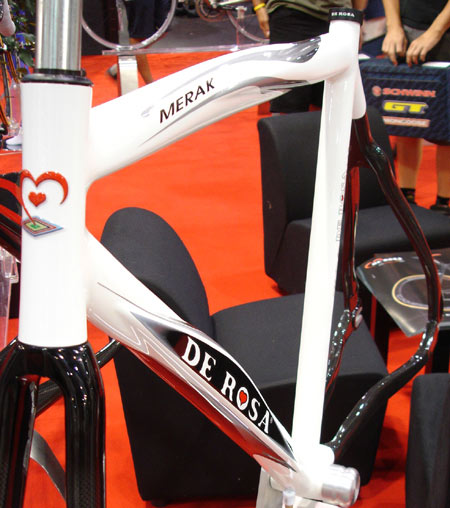 Lest you think that this bike one for the tiny people, it features one of the more radical reinforced rear ends in the business… 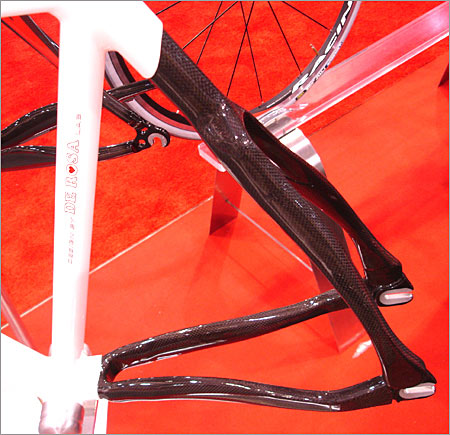 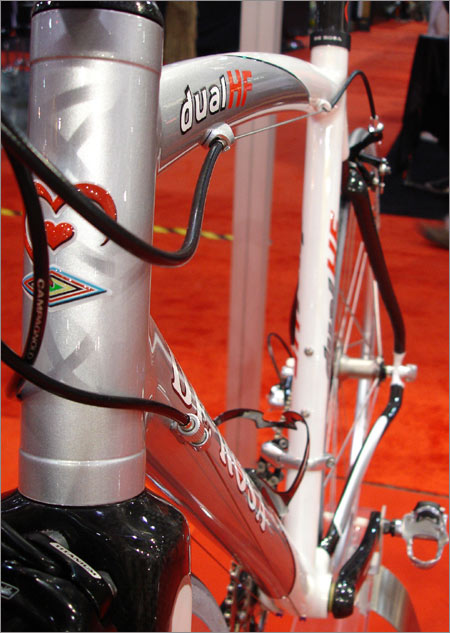 We quickly realized at Gita Sporting Goods that a Belgian will step up for a good hump if they’re Cannibalistic enough. 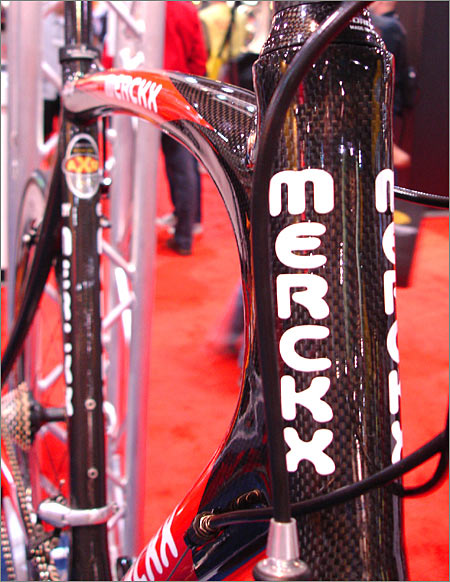 Pinarello decided that they would go a bit different route. If you look closely you’ll see that the down tube is ribbed for your pleasure… 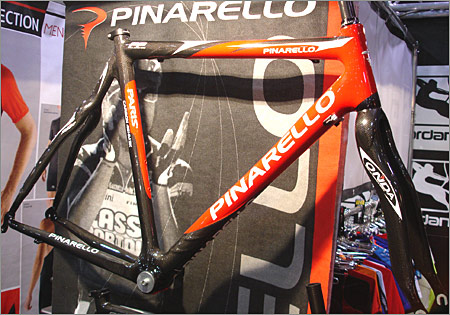 While the folks at Kuota were busy delivering a Kredo from a custom painter who had granted a customer’s wish of a Valentino Rossi MotoGP replica. 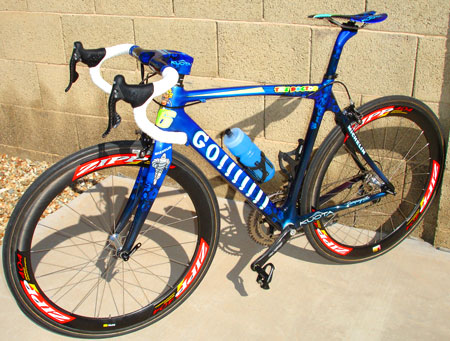 We wandered out of little Italy, which by the way was the only section with a private catered lunch with great food (Thanks Mario) for a quick stop to the guys at CSK. They are a small company that makes absolutely no bones about the fact that (like most bikes, regardless of label) they are a far eastern design and build. They do Carbon… 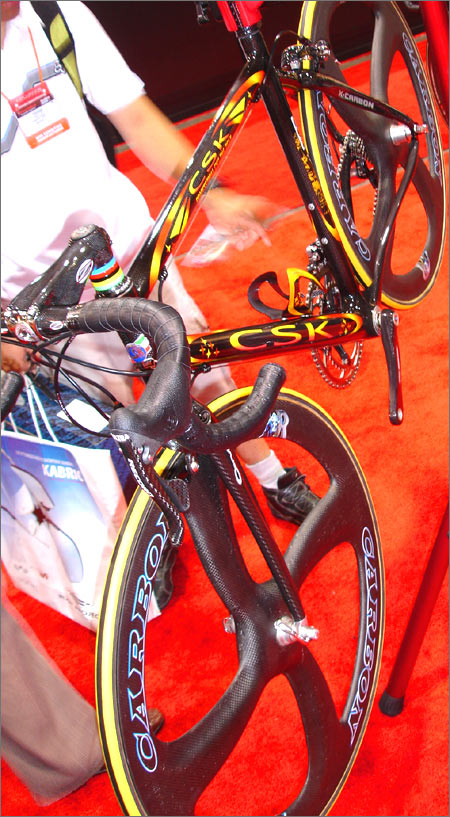 and combination carbon and metal bikes that are a very nice build and an even nicer price, as they have an almost complete lack of pretense and seem to just want to get you a great bike for the money. 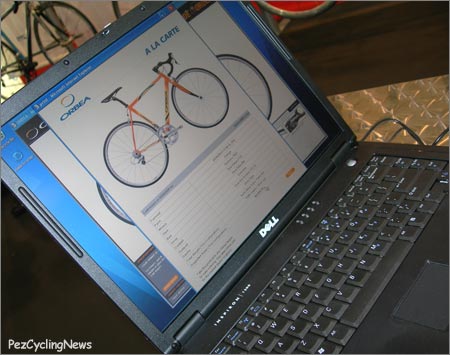 A stop over in little Spain revealed the guys from Orbea showing the “best use of the web” for bike buying. Their new Made To Order section of their website allows customers to build up complete bikes on a computer screen, choosing and swapping in various framesets, colors, wheels, bars, gruppos – everything you’d choose from your local dealer – and seeing the bike come together before your eyes – complete with prices and weights. Build your bike, click order, and Orbea puts it together and ships to your local dealer. How easy is that?

From there we headed West and rounded through a few stops on the Tour De America.

Serotta had their new Meivici on display both build and as a frame only. 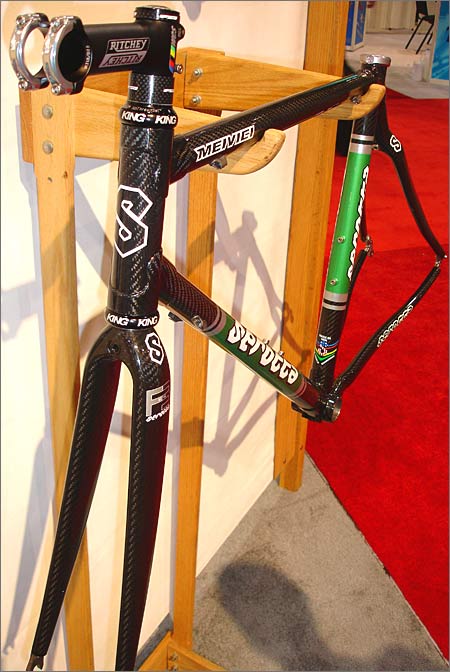 There is not much chance that Pez will have one of these done custom for testing, as it tips the scales at about 7 grand for frame and fork. But we can say that the detail going in to this frame is special and the pedigree is enough to make us wish for it!

Still flying the flag we also dropped in on Ritchey to have a peak at “The Man” (along with a visiting J-lo). 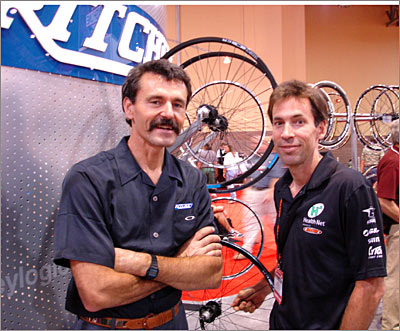 Then we noticed the bike at his feet and thought, “what’s wrong with this picture”. 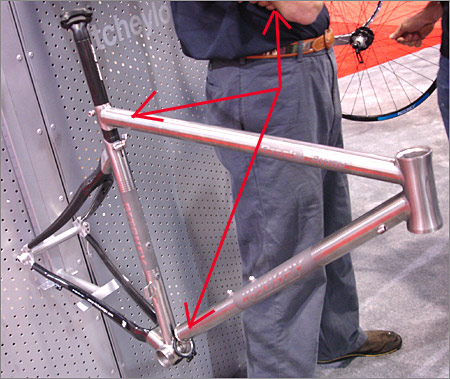 When we realized that what we should have been thinking is “what’s sooo right”, as the new carbon Ti Break Away would be a sweat welded dreamy bike even without the well thought coupling system that allows it to travel in a normal, checkable suitcase… 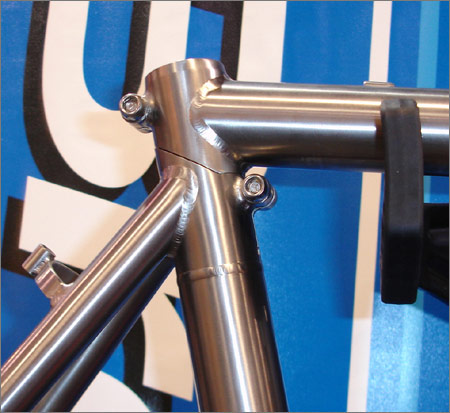 One bike that had us wondering about its ride qualities was the new Ghisallo. This bike was already too flexy for some in its older heavier format. 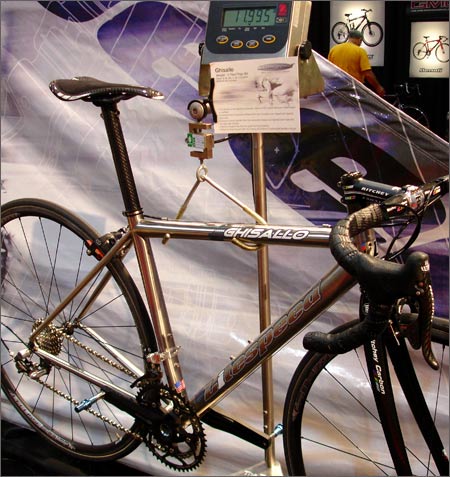 We would love to see if Litespeed cut the weight further but did so without making this bike resemble pasta cooked far longer than that served in the Italian Catered lunch. The sad news is that a great bike for guys needing a bit more stiffness but also wanting comfort may have also been sacrificed for the sake of “selling” weight in that the new Vortex was reported to also now be too flexy by some at Demo day. Damn shame. 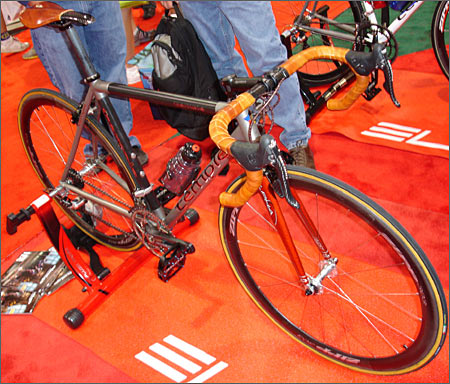 They had it decked out with some insane kit, including leather wrapped bars, m5 brakes etc… and it made me wish for a couple more days on it.

Heading a bit north of the boarder, we stopped in to Cervelo and I got a look at a bike I liked so much I asked jokingly if they could “box this one up and send it to my place”. 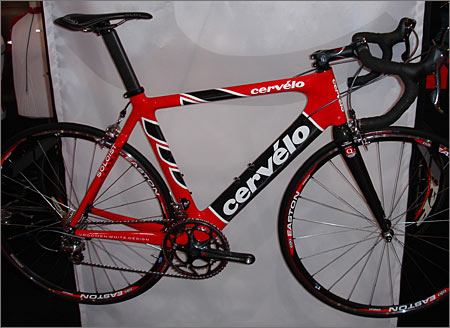 A bit surreal when the door bell went bong just last night, only to reveal a UPS guy at my door last night with a big box marked “Soloist team / Pez”.

All in, one of the best bike conversations was had at the Tommasini booth. 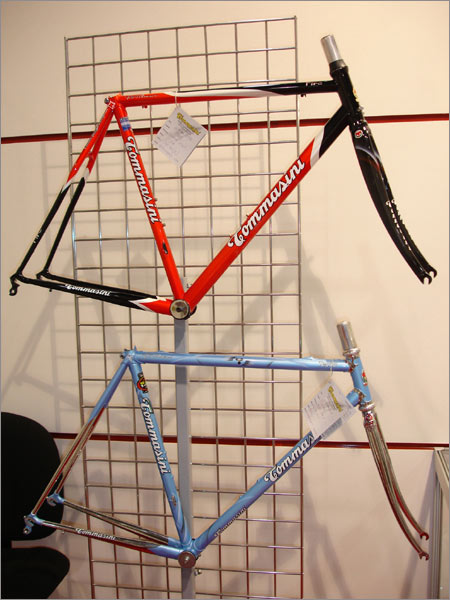 While there were manufacturers with Disco-atmosphere booths and 40 reps, 5 of which could tell you anything about how their bikes are made that wasn’t a verbatim quote from their massive yet equally lacking marketing packet, Tommasini was manned by one guy that just knows bikes. How they’re made, who they’re made by, and that none of the BS that is part of selling a bike is nearly as fun as just riding one.

Would I lust after any of the custom Carbon or Carbon Ti, or even Bamboo out there? Hell yeah! 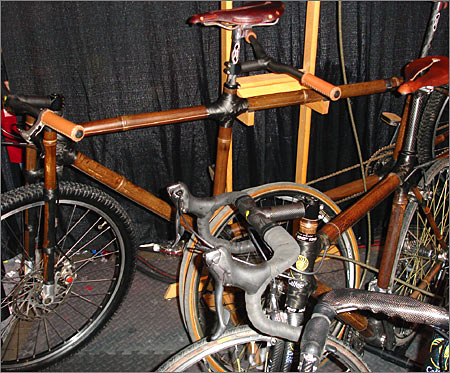 There are any number of off the charts mega performance machines that are wonders of engineering achievement. 14 pound rockets that ride like a dream, handle exactly as they should and are actually (relatively) affordable were on display left, right and center. The bikes of tomorrow really are unbelievable!

All that said, at this year’s Interbike I found that looking to the bikes of tomorrow had a lot of competition in my heart from several bikes that brought on thoughts of yesterday.

I might actually like to pedal up to the next ride on a bike that doesn’t say “I am here to kick your ass” and instead, it simply says “nice day for a ride”… 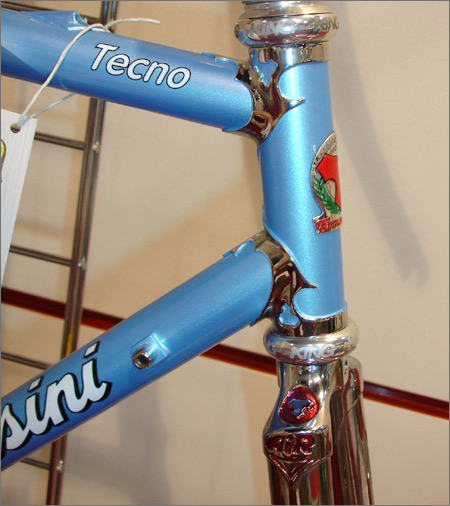 End of the Season Review: Back to the Future