Yes – it’s been a couple weeks since our last post, but we’re back and rollin’ with more Interbike goodies, and the wait is worth it – Here’s what’s cool from Polar, SRAM, Saris, FSA, Castelli, Moots and more…

POLAR-IFIC
We commented on Polar’s new designs going fashion forward in our Polar RS800CX PTE review, and looks like they’ve shifted up a gear for 2010, with the all new CS500. The new diamond shape is considerably larger than previous models (but weighs only 50 grams), and hosts a much larger screen to present data in way easier to read BIG digits. 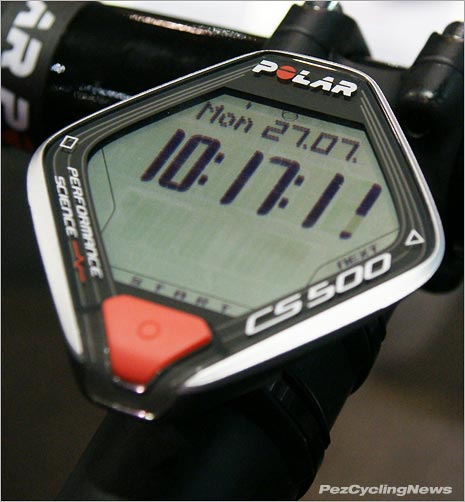 In addition to tracking all the basic data and then some (speed, distance, cadence, temperature, current altitude, ascended/descended meters, and incline grade), it also works with their WIND power sensor. 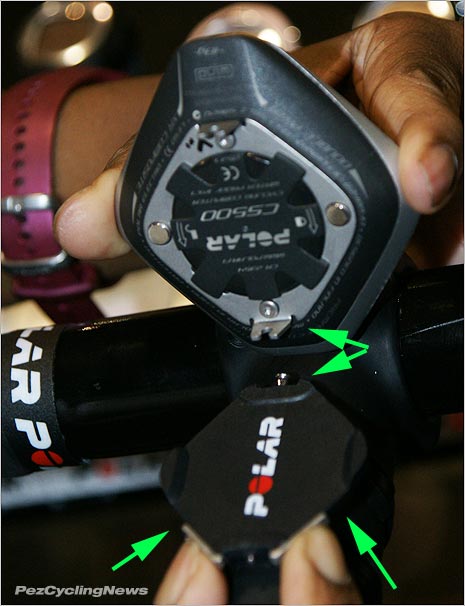 Data is accessed via rocker switch operation, so instead of squeezing buttons that may be hard to reach / use with gloved & sweaty hands, all you gotta do is tap the sides of the screen. (see this quick video from Polar below)

Another cool feature is the Dual Lock Bike mounting system, which replaces the old press-fit with a solid locking mechanism. See the green arrows above – you simply push the twin button at bottom, which releases a mounting pin. There’s no way the CS 500 will come loose – unless you want it to.

SRAM ROLLERS
All new for 2010, SRAM showed 3 new wheels – the S27 AL Comp, the S30 AL Sprint, and the S30 AL Race – all aluminum clinchers, with each hitting a different price point and weight. 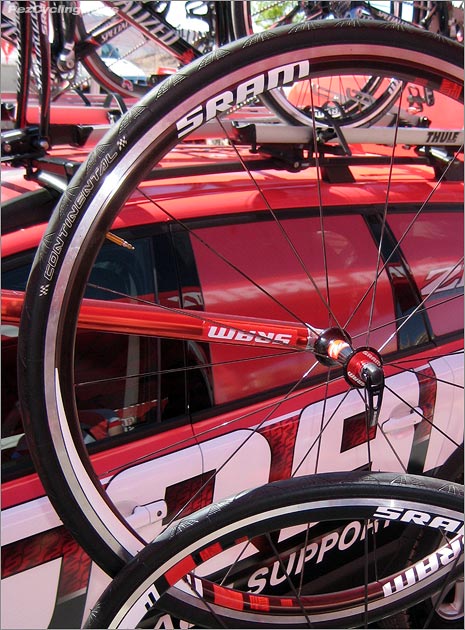 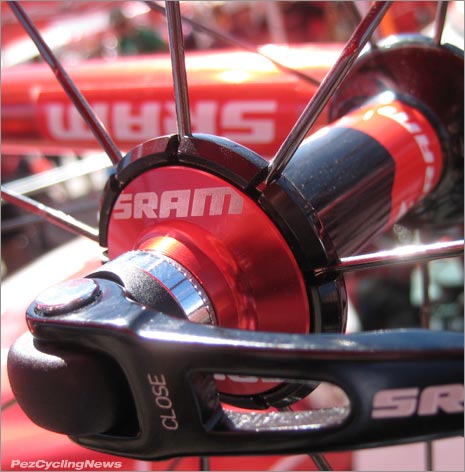 They’re due to hit dealers in November, and hopefully land on one of our test bikes soon after that. 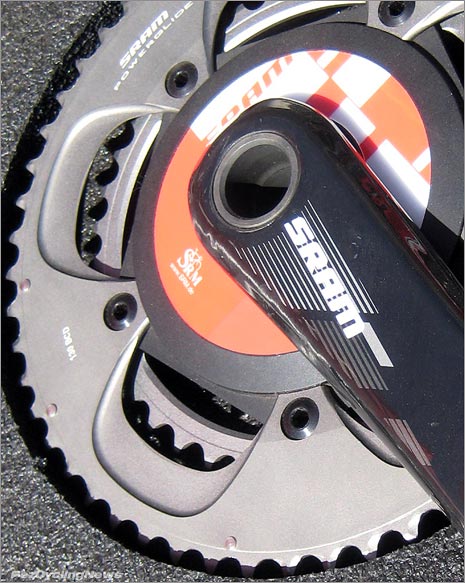 SRAM has also upped their commitment to the ‘power’ generation, with a deeper pool of tools for power junkies everywhere. They showed two wireless power cranks, the SRM™ (US $2745.00) and Quarq™ (US$1795.00). Both systems are available with a Garmin ® display unit option as well as Training Peaks software. 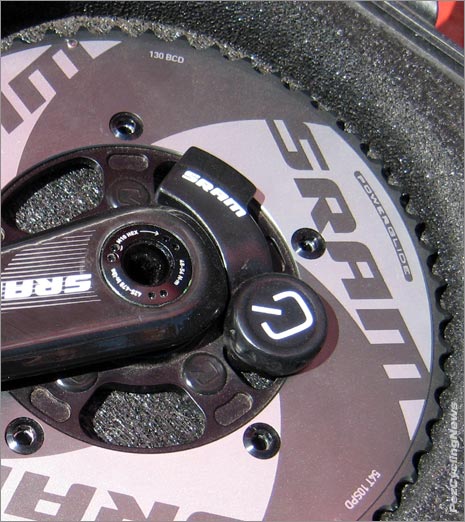 Going Solo
We’ve all dreamed about it, even willed it to happen, only to find the legs had other ideas. But now, Saris steps up with a cunning plan that makes on-car bike transpo easy enough for almost anyone. 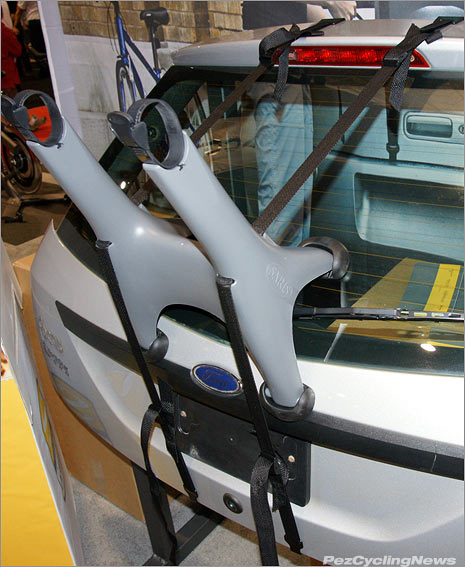 The Solo is a single bike carrier that straps on the back of the car. Nice. Fine. What’s cool is that it’s small and light enough to carry in your trunk and still have space left for groceries, another bike, golf clubs. It’s even small enough to strap onto a backpack to take along from one car to another. Perfect for urbanites with small cars, or anyone needing a light and handy on-car bike carrying solution – the Solo will be here by February, and cost around $50.00.

Full Speed Ahead
From the guys headquarted in the Pacific Northwest AND Italy, FSA serves up guaranteed meeting of fashion and function with minor but very appealing tweaks to the line up.

Most noticeable is the new finish on the SLK road line – which shines in all new silver – ! Long producers of high quality components that work well and look even better, here’s proof there’s little need to reinvent the proverbial wheel. 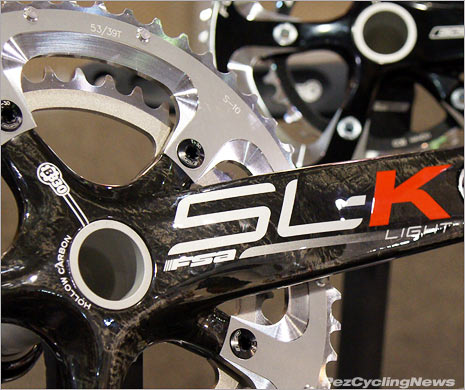 The SLK cranks get a cool carbon finish that looks about as different as the traditional weaves as you can get, and the silver rings tie it strikingly to the rest of the line. 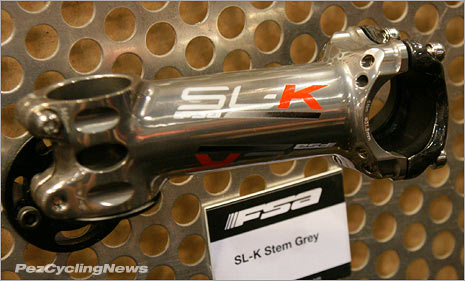 The stem is officially colored as ‘gray’- but don’t be fooled – that WWII fighter plane finish is damn cool. 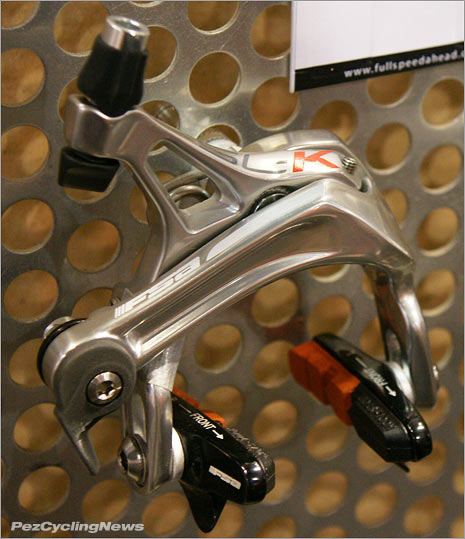 The SLK brake set completes the trifecta of silver. 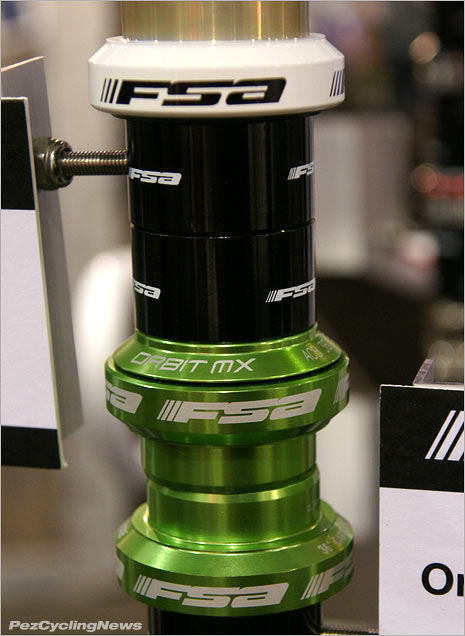 Headsets were turning color all over the show floor this year. Not sure why it took so long, but sure great to see some choices coming back for those of us who don’t want to look like the rest us. 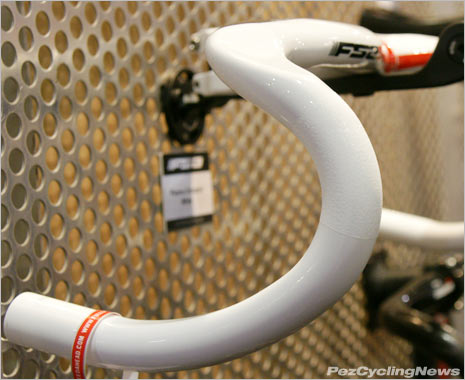 And the power of white continues its climb up the charts – FSA’s one piece carbon Plasma Integrated bar & stem will surely adorn many pros bikes (this was a fave of Gilberto Simoni a few years back) – and possibly even yours.

Castelli made a big splash to the front of the race game this year with their high profile sponsorship of the Cervelo Test Team, where pretty cool graphics and a bunch of choice wins have likely paid back the investment nicely. 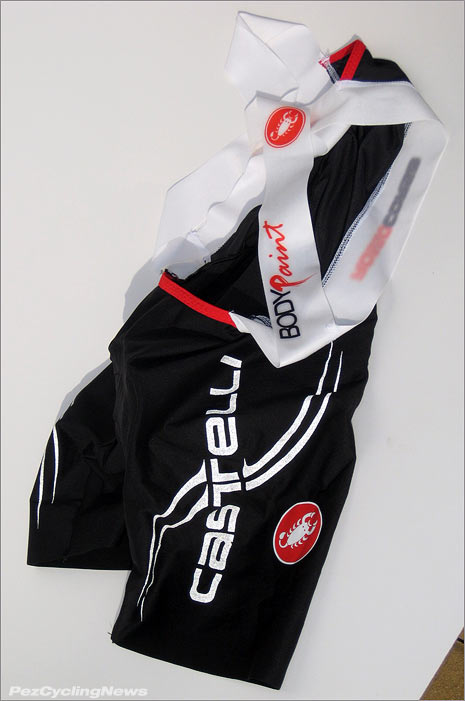 The Body Paint bibshorts are partially the result of feedback from the race team, and up close there’s no denying this is a high-end performance piece. They’re a warm weather garment with a very low cut front and a nice airy mesh in back between the straps. The main body of the shorts is cut from a single piece of lycra, which is stretchy enough to conform to most bodies and eliminates the need for multi-panels and added seams that can chafe or unravel. It also makes for a smoother fit, which any aerodynamisist worth his weight in smoke trails will confirm creates less airflow turbulence and therefore less drag. (Which should make you faster).

The fabric is also different from most Lycras in that it’s made with monofilament fibers, which has quite a different feel. Castelli reports the big advantage is the yarns are made of a single fiber instead of multiple fibers, and the moisture absorption goes down significantly. 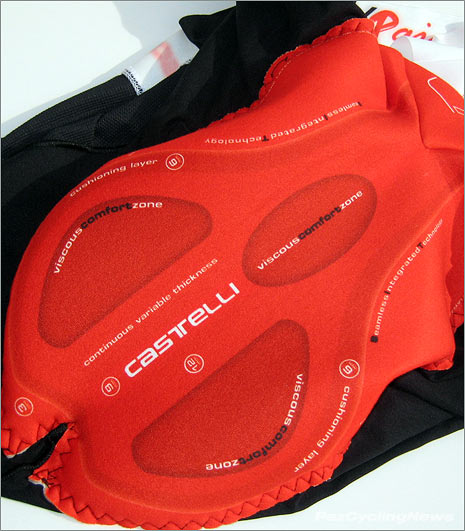 The chamois is seamless where it counts.

The chamois is different from most multi-density crotch savers I’ve seen. Instead of a bunch of raised ridges settling against your skin, the skin-side surface of the chamois is one smooth piece. The multi-density cushion of the chamois is on the other side of the foam – and created by carving away sections of a single block of uncompressed foam to create the different sections of cushion. While we’re used to seeing chamois foam that is stamped in a certain pattern to create variable densities, Castelli says their method makes a more comfy seat.

The chamois also features 3 gel inserts – two for the sit bones and 1 right behind your junk. They’re called a ‘viscous comfort zone’ and are so thin, I could not tell they were even there, which says a lot about how well they integrate with the pad. Placement of these ‘zones’ has been chosen to fit “90% of saddles” –and I’ll attest they worked fine for me on a San Marco Zoncolan. 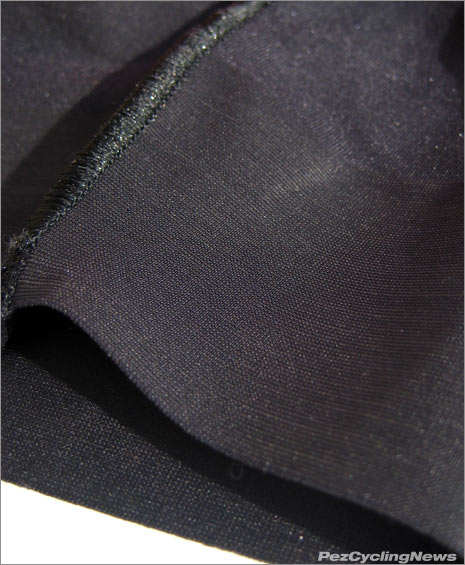 This integrated and minimalist approach is continued in the leg bands, which eschew a fused, glued, or sewn in band to hold the legs in place. Instead, the Body Paint bibs feature a 2 inch wide gripper of 43% lycra that is seamlessly milled into the legband – very unobtrusive, but very functional (ie: it works well.) 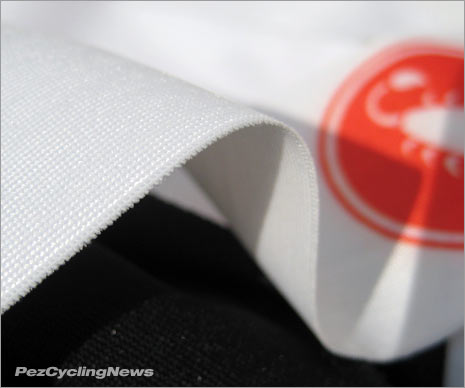 The shoulder straps are satin-like in their feel.

The shoulder straps have a real ‘skinsuit’ feel in that they appear to be sewn without any seam at the edge. Very close inspection however, reveals that the 2 inch wide band of lycra has been ‘finished’ by Castelli’s mill in Italy. I’m told this was no easy task, but the end result is very thin and very smooth. The only issue I had was that in spite of my best efforts to keep ‘em flat, they did the same thing most straps do, and folded over when I was riding. Thus wasn’t really an issue over top of a base layer, and since we’re all shaped differently, I suspect they’ll find their own level on you too.

The fit and chamois felt great on my initial 1 hour test ride, and priced at US$249.99, they’re top tier for sure – I suspect Castelli will sell as many as they make. 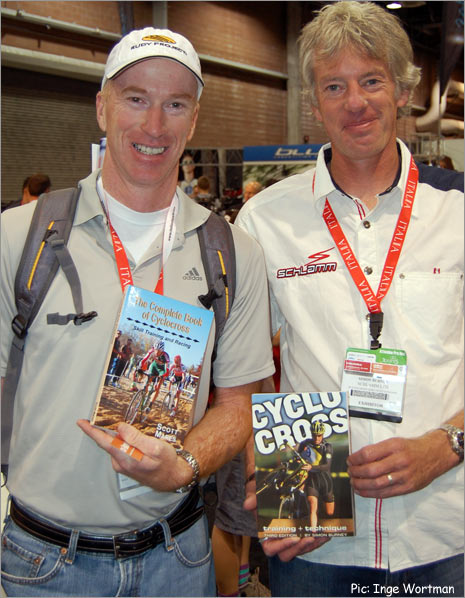 Like any parent knows, producing something tangible from your own blood, sweat and tears is definitely worth smiling about. And although I’ve never done it myself, I can only imagine – based on the happy mugs of Scott Mares and Simon Burney – that publishing your own book must be right up there with life’s other amazing moments.

Check out Scott’s Complete Book of Cyclocross at
CX-Book.com, and read the Pez-Review of Simon’s Cyclocross.

A Kick In The Moots
Moots bikes have been handbuilt in the Rockies for roundabout 28 years now – which represents their entire lifespan, and a whole lot of history, experience & knowledge in the world of working with precious metals to create modern day bicycles.

Introduced just in time for Interbike is the all new for 2010 Vamoots RSL – which stands for ‘race series light’ – and is fittingly their stiffest and lightest (just 1,180g or 2.6lb) road bike yet. 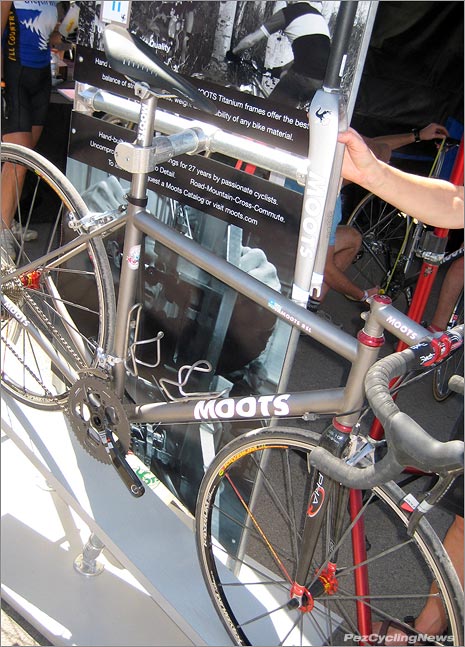 Although the Moots media kit pics make mine look just plain bloggish, I’ve used my own for authenticity’s sake. The new for 2010 Vamoots RSL comes with the new Alpha Q GS40 that was developed with and for Moots. All Moots frames are built – by hand – in Steamboat Springs and along with a solid pedigree as one of America’s best builders of titanium bikes, the classic brushed ti finish and company graphics are unmistakeably Moots. Framesets will sell for US$4300.00. 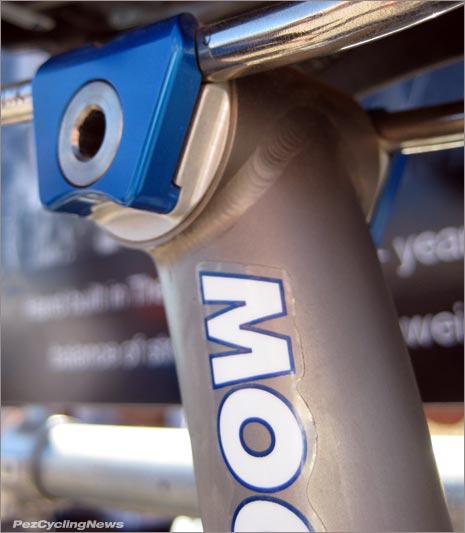 Also on show was their way-cool in-house designed ti seat post, now offered with colored stem faceplates, seat collars and Cinchpost guts so you can accessorize like Liberace. The lean & clean design adjusts via allen keys on either side, and for my money is one of the nicest looking seatposts anywhere.