Interbike ’10: Some You Saw & Some You Missed

Interesting week at Interbike as some reports said it was “bigger and better”, but to me the show floor looked smaller and with a lot fewer people in the aisles. Still there were more than enough products on display to keep a geek happy.

While the show floor was packed with similar kit, one road bike stood out as Volagi presented a very clean crack at Road Disc. 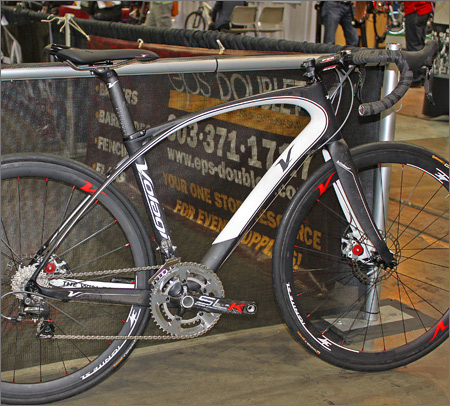 Clicking the top thumbnail gets you a larger view.

Volagi (from Latin: “The will to go”) are a start-up company but the guys behind it have 30+ years in cycling product design for brands you’d recognize. They were looking primarily at the longer distance performance / endurance racing crowd and the bike is designed with more than simply disc brakes as a novelty. Take note that the seat tube is a pass through and the seat stays join a ways up the top tube… 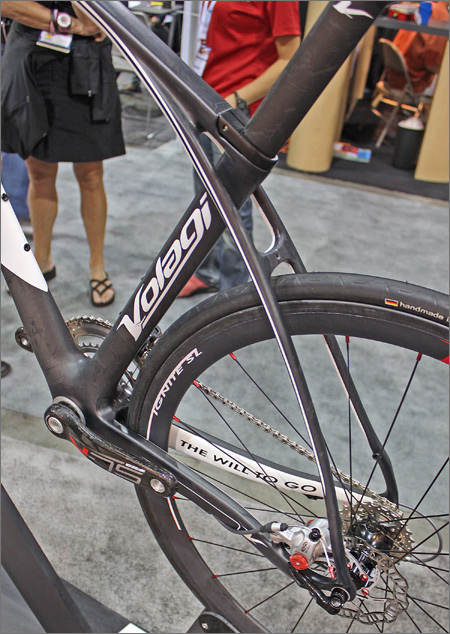 That leaves the remaining top tube as a flexible support for the seat tube, allowing it some travel… 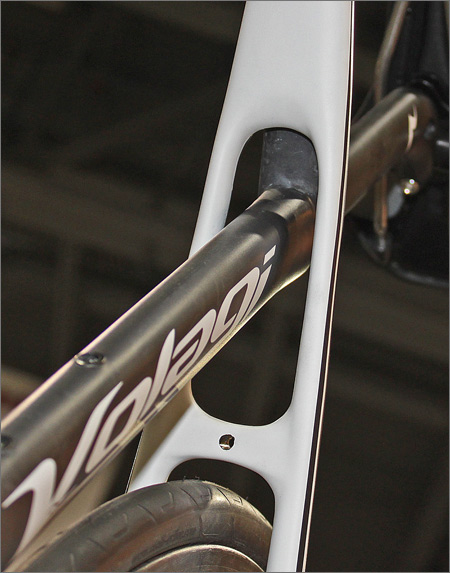 It’s said not to be “springy”, but to allow enough travel to provide notable damping. The bottom end of the bike is fairly stout and the extra vertical travel doesn’t need to come with much of a flex penalty.

Then of course there’s the brake set that is a bit less than standard for road. 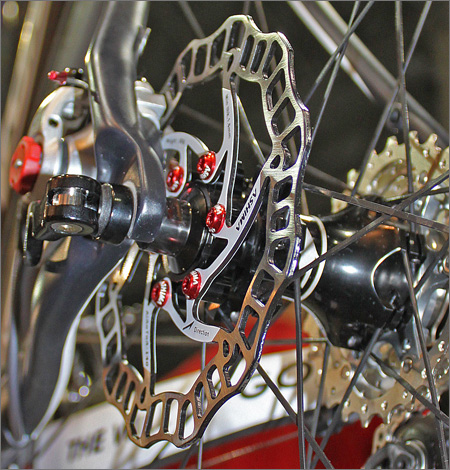 This is a made for production design that is full mechanical (cable actuated), and the system seemed to function well on the show floor. The hubs are custom for Volagi taking care of the spacing issues that are the biggest reason you don’t see many tuner bikes running discs despite a big selection of most of the parts.

The front fork is also made for disc (and it also has a hole for standard brakes). 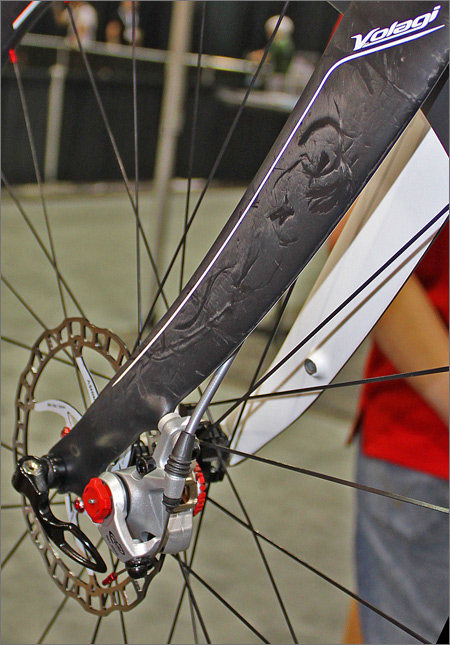 It has the hard mounts but also has internal housing routing that is nice and clean.

The SL model (as if Pez would have grabbed the non…) was 15 pounds and change as is. Both bikes on display seemed to be fully functioning beta.

Volagi are finishing up testing on the units made now and retail bikes should start landing sometime around the first of the year. The list of dealers (the good ones that noticed this wasn’t just another no-name frame at the show) are already lining up.

MOTOREX were just around the corner from Volagi and while they’ve been at the moto show game for a long time, this was their first year at Interbike.

We’ve received 100% positive feedback from both the Lube and Cleaning reviews from readers so far and I’ve started using the full range exclusively. 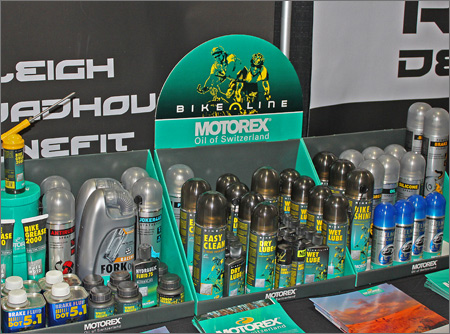 Motorex are still securing the dealer base and made a few moves at Interbike that should see this in stores near you pretty shortly.

Something you may not see in stores was a pretty nice Franco Ballerini Memorial BMC SLR01 that was on display, strapped with a set of the new MadFiber hoops… 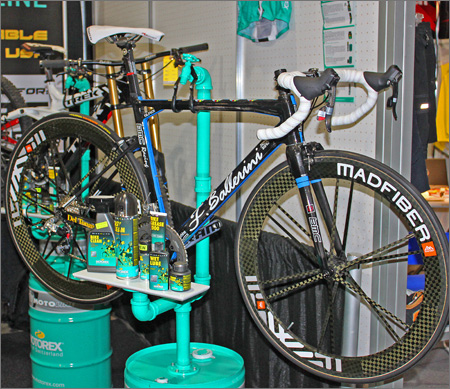 But more on that later…

Another bike that caught the eye was the latest from LOOK. 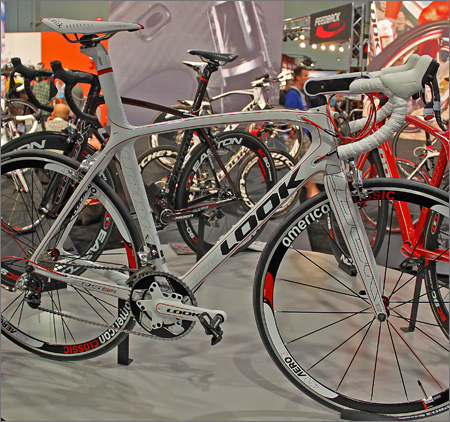 The new 695 and it’s SR version are frikin HOT…

A lot of the show focus for Look is on their new Power solution with Polar (and we’ll have more on that), but I walked around the circle of 3 versions at the show 9 times before someone stopped me because I was blocking other folks from taking pictures (the same folks I asked to get out of the way for my own selfish pleasure…) 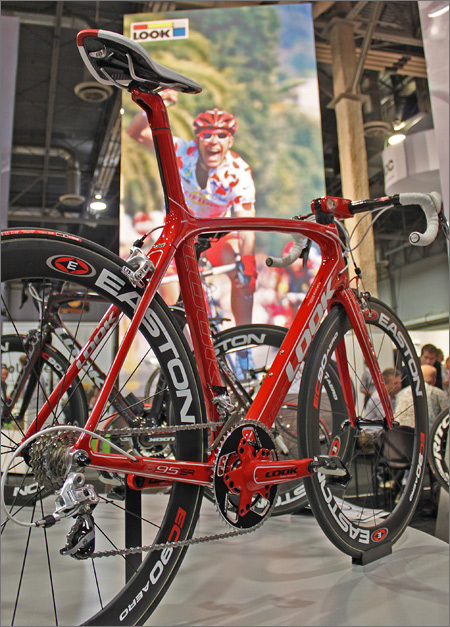 The story on this bike is too deep for an Interbike pass-over. The best looking stuff is likely the tuned carbo sections inside… 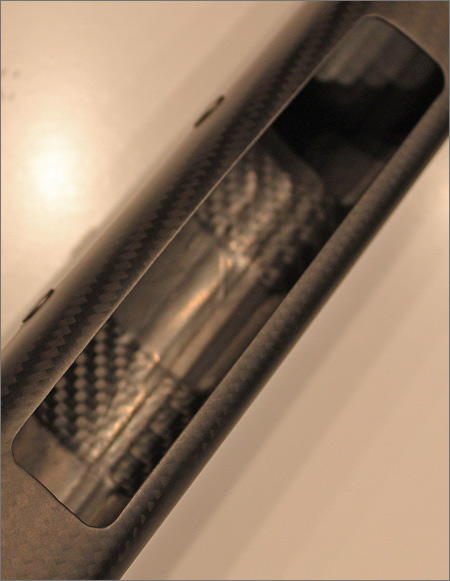 and along with the newest version Zed 2 Cranks, Look add one the cleanest front ends around with the Head Fit head set and the C stem… 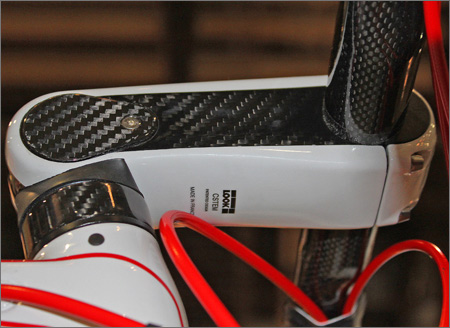 These are ready to go right now… 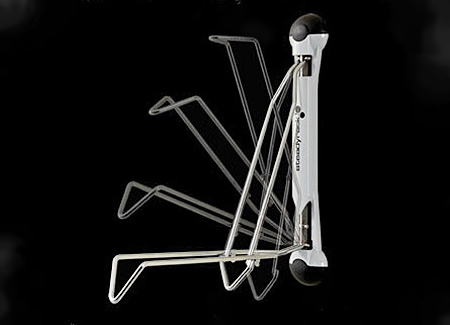 OK, so how does a 60-70 dollar item make the page? For guys like me who have a bunch of bikes, or for someone that just needs a little flexibility for storage, this thing kicks ass… Loading bikes takes no effort at all. Flip down the rack and push the bike in. The weight rests on the rubber of the tires and hold is very secure. 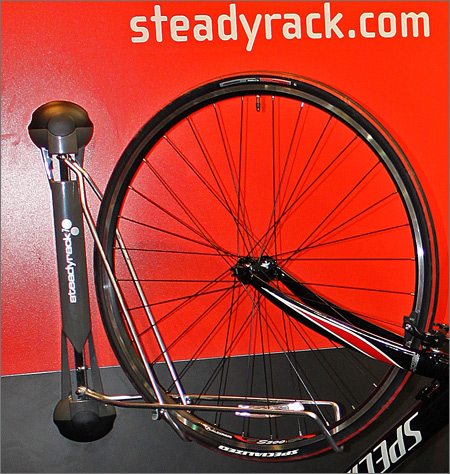 There is a small wall bumper down lower to rest the rear wheel in. 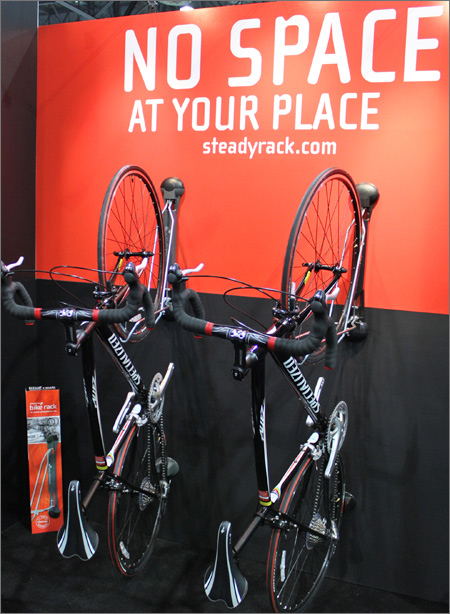 The little bumper plays a role in the part that makes this invention far better than the simple wall hook. Once your bike is loaded, simply fold it to the side and out of the way… 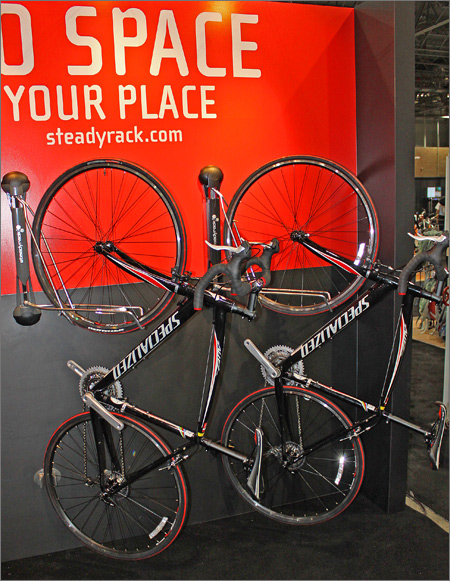 For single bike people, this is a nice option… For multi bike people, this flexibility means you can mount several bikes securely in a tighter area than wall hooks. Turn a bike in a wall hook and the rear tire skidders down the wall. Bump a bike in a wall hook and it can come out far easier than with the Steady Rack. And Steady rack makes for a lot less damage potential to most rims versus a standard wall hook.

I tried to buy the floor models on the spot… I’m hoping Steady Rack get solid distribution for North America soon.

That’s all for this one. We’ll be back with a few more bikes and bits shortly.