Show Season – it just keeps on giving… This round of noteworthy gear shows off what to wear, with new kit from Capo Cycling, DeFeet Socks, Club Ride Apparel, and Champion System.

CAPO CYCLING APPAREL
There are reasons some brands stick around and grow, and as Capo Cycling celebrates their 10 year mark, it’s clear they’re here to stay. Credit a lot of hard work by founders Gary Vasconi & Rob Carbone, some smart business moves, and commitment to making quality cycling kit that continually punches above its weight. 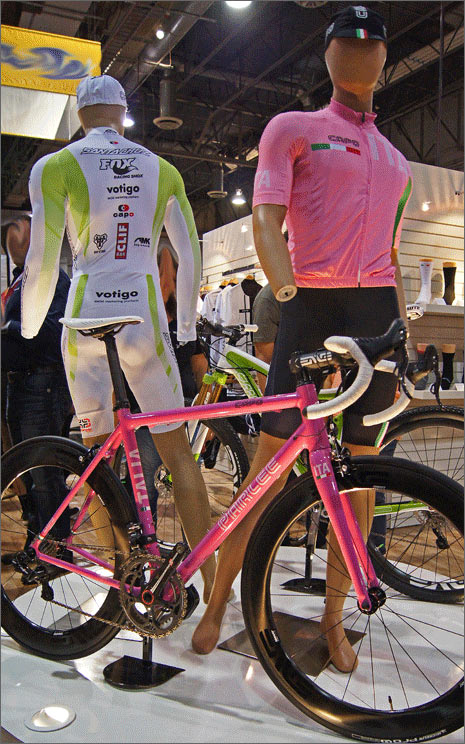 Capo’s new for 2013 Giro-inspired SC12 jersey turned a few heads at the show – especially paired up next to this custom Parlee.

Their stylish designs might have something to do with it too – if understated class, peppered with the right amount of spice is what appeals to you. New for Spring ’13 is their Giro-inspired pink SC12 jersey – part of their made-for-racing-but-you-don’t-have-to mid-range SuperCorsa line. 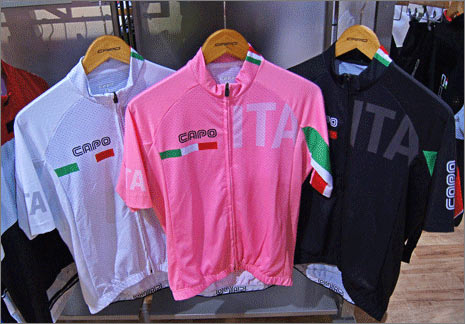 The SC12 kit has until now only been offered in black and white, but will also come in red, and is an easy match with their all black SC12 bibshorts – or an edgier look if you’re man-enough to pull on the all white version of the bottoms.

Longer sleeves, tighter fit, and full length zips are all over the pro bunch these days (but likely at much higher prices), and at $150 for the jersey, it’s nice to see a higher end brand offering technical kit that’s not priced off the charts, while still offering thoughtful design & fabrics. 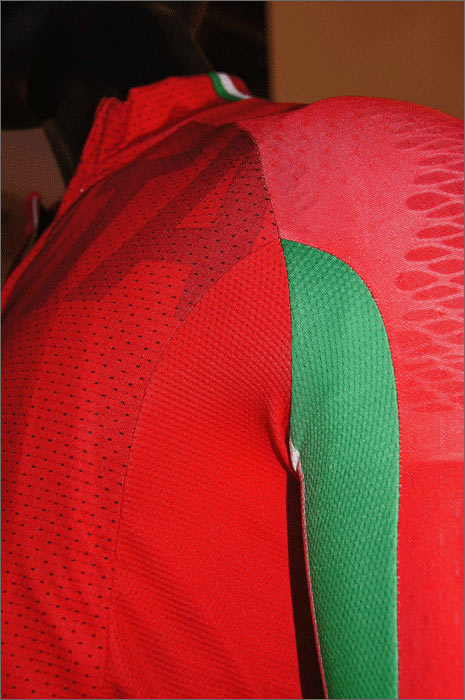 Note the multiple fabrics used in the SC12 jersey above – their Carbon E fabric features those black dots on the front piece which are the carbon thread and works to help regulate temps and also control microbes that cause stink. The underarms and side panels are made of their ‘Silver’ fabric, a quick drying micro-fiber with visible silver yarn, which increases breathability and provides effective anti-microbial protection. The sleeves are HydroDrop fabric, which is lighter and used specifically in places where more moisture transfer is needed. 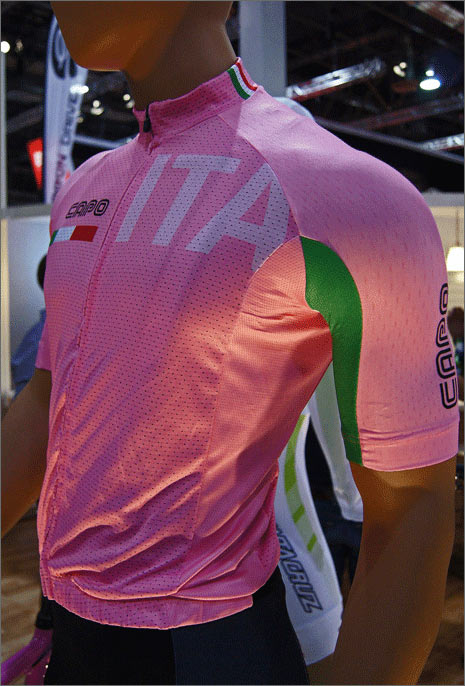 You can see a Capo base layer is showing through the sleeve, and they’ve paid equal attention to the rest of their line as well, unlike some brands who treat it as an afterthought. 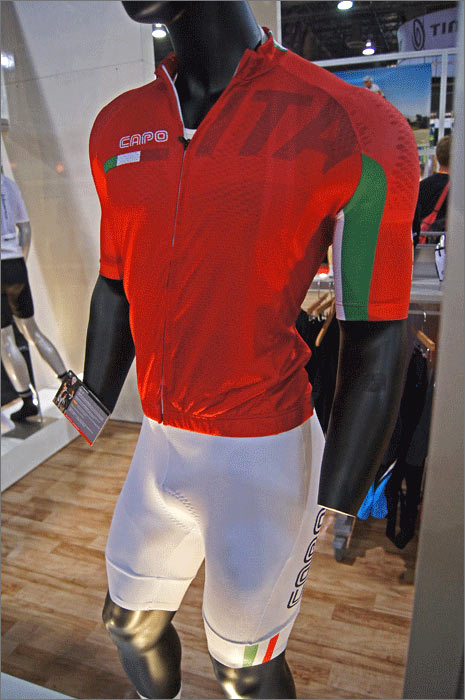 The SC12 Bibshorts run $200, and are made from High Gauge lycra for the body panels to give a bit more compression than most standard issue fabrics, and even higher compression PowerLycra around the wide leg bands that works well with the silicone grippers to hold them in place. The legband edges are lazer cut, so they’re low profile too.

The chamois uses what they call Anatomic DP elastic interface technology, a two-piece chamois that’s sewn to conform with the body, and is a pretty low profile to minimize bulk. The bibs are offered in black & white.

Most folks know Capo do a nice job in socks… 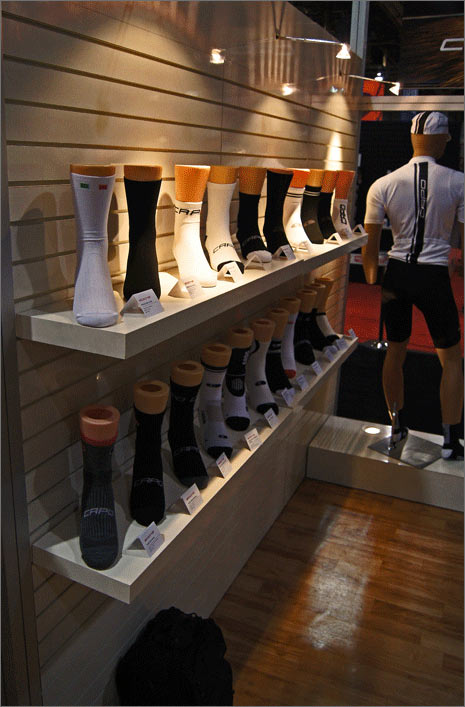 While they’ve grown a big following for their fashion sense, they’re also into substance and their new compression kicks are a great example.

Pez Technical Ed. Charles bought a few pair ahead of the show and wore the calf-high version on the million mile march that has become PEZ’s busy end to end to end show floor dash over several days… 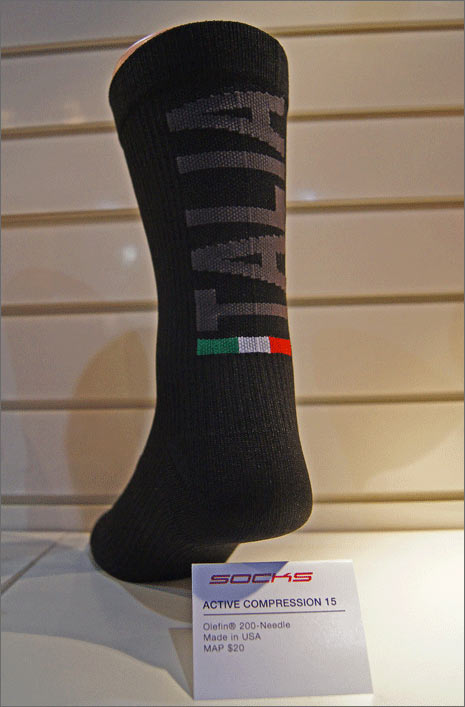 Charles also wore the full length socks to sleep in (you read it here first!) and the benefits of both lower fatigue and better recuperation held true this year as he noted WAY less foot discomfort and lower leg fatigue and swelling… The dreaded “cankles” happened every year prior by the end of the 3 days, but this year there wasn’t a cankle in sight and far less aches in general.

And speaking of socks…

DEFEET SOCKS
Any self respecting PEZ-Fan knows we’ve long been fans of DeFeet socks – they’ve been our sock supplier since 2004. So for years now, my 4:00PM Thursday afternoon stop at Interbike is the DeFeet booth (I admit it’s no fluke that this coincides with the opening of the afternoon beer taps). 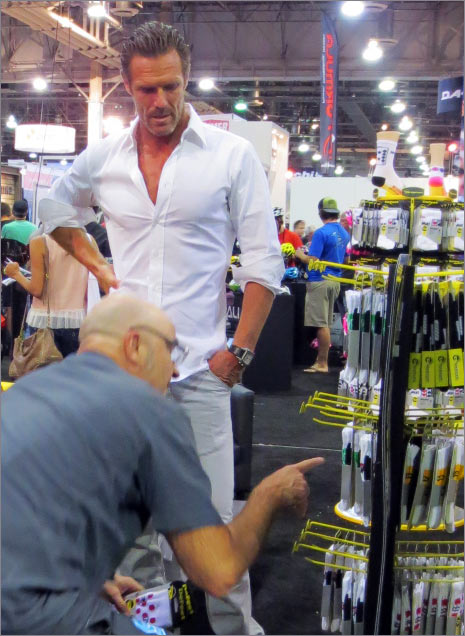 This year I noticed the familiar face (and the biggest road star at the show) of ‘il re leone’ himself – Mario Cipollini – checking out socks, and DeFeet founder Shane Cooper falling over himself loading up Super Mario with samples. I thought this was pretty cool, but thought it was even cooler that Cipo was after the same socks we’ve loved at PEZ for years. 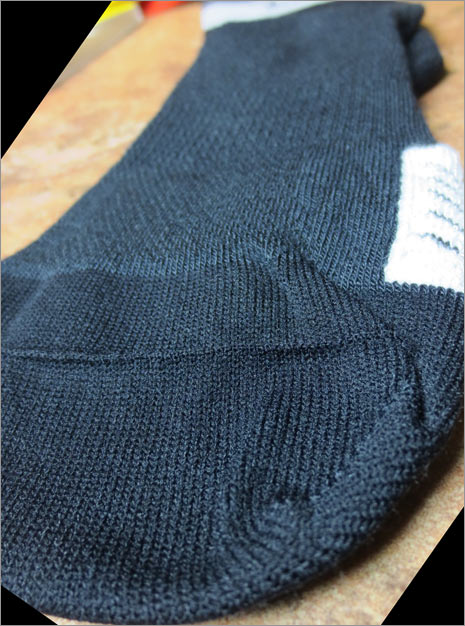 New for 2013 is the Cyclismo made with a new material called ThermoCool from Advanza, which is made from recycled materials and features a mix of hollow-core and channeled fibers that provide better heat management. 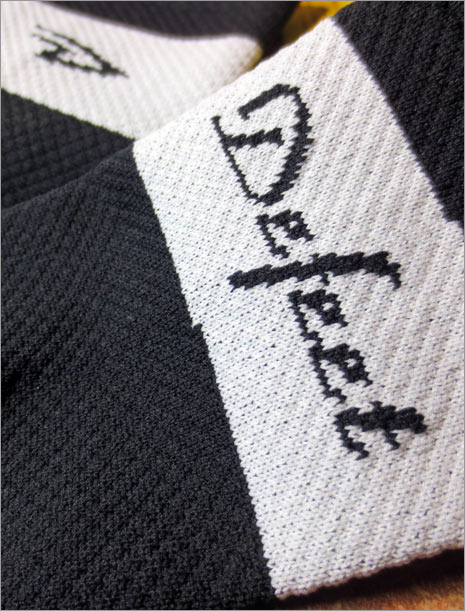 It’s DeFeet’s top of the line sock, is shaped to form fit the foot, has a thicker pad for metatarsal damping, and they’re ‘no feel’ toe seam – which all adds up to one comfortable sock. Expect these online and in stores soon.

CLUB RIDE APPAREL
With most apparel manufacturers showing gear geared to the technical side, the Club Ride Apparel booth stood out for showing kit designed as much for casual off-bike wear as it was for riding. Maybe because it was Friday and so much of the show floor began to look like one giant display, but a booth showing casual wear shorts, jeans, jackets and more (all priced well within reach for most of us) was something different. 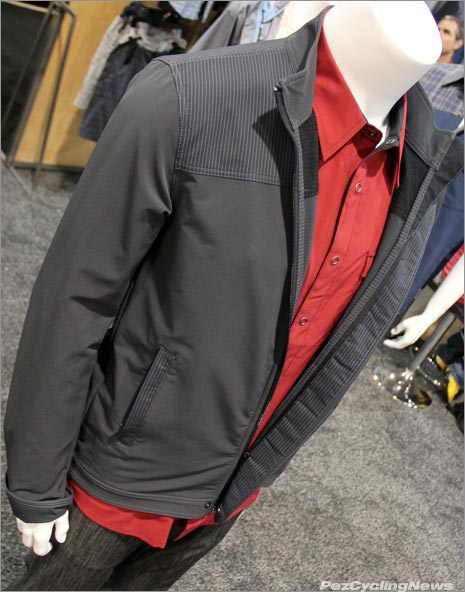 The men’s ‘Rale Jacket’ is modern, urban, cool – and made from a stretch fabric that moves with you on and off the bike. 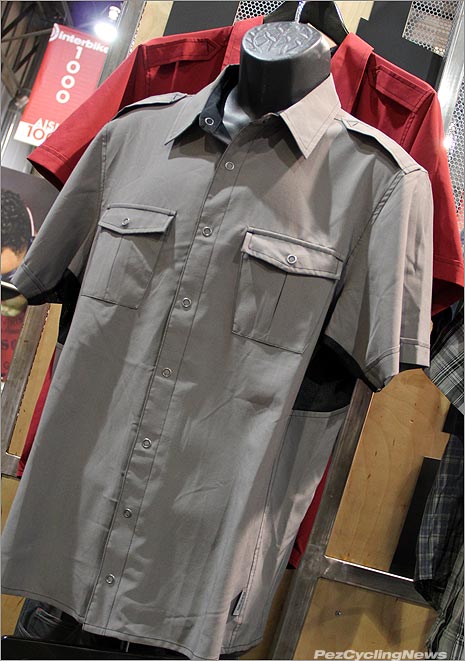 The ‘Roxbury’ jersey might be called a ‘shirt’ in some parts – but brings a lot more tech than you might expect, with mesh under the arms, rear smart phone pocket and reflective accents and UPF rating of 30.

The brand has been around since 2008, and has its Idaho routes in the mtb scene. Originally created to bridge the gap between ‘on trail riding’ and ‘on patio chillin’, the line began as casually styled kit that was technically designed and made for real riding, but offered a less technical look better suited to relaxing in the pub or restaurant after the ride. 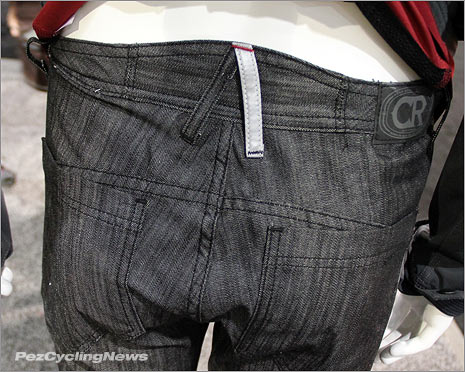 The ‘no crack back’ – why this was never made a law is beyond me. And that belt loop is reflective – to help save your ass on your ride home after the pub. 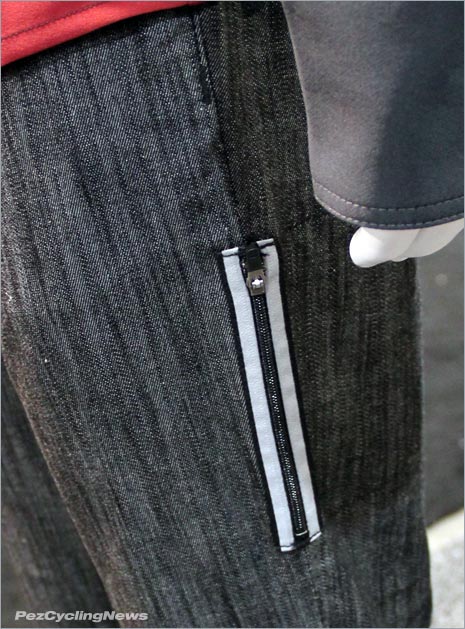 A handy side pocket makes a nice home for your phone, and keeps it tucked away behind the leg – not bulging unsight-ily in the front. Once again a nod to safety with the reflective zipper piping to keep you seen at night.

Their latest collection of updated styles feature a more ‘urban’ feel clearly made to appeal to riders beyond just mtb. The “Go West” slim cut shirt comes in classically dark colors with some cool detail like contrasting buttons, and even a couple of pockets in back. Priced at $90, I’d say this is worth a closer look. 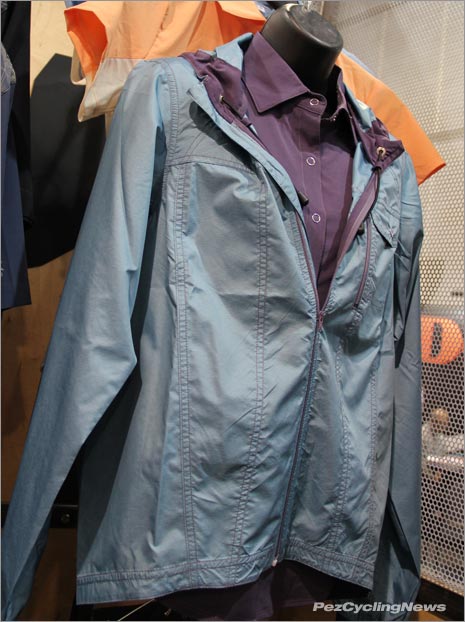 Here’s the Cross Wind rain shell in turquoise, over the Bandara in Dark Purple.

The ‘Ray Jean’ is a really cool pair of … wait for it… jeans. Slim cut, a lighter weight denim that breathes better on the bike, some cool & functional pocket details, and specially designed gusset that replaces the traditional crotch seam most jeans have – which should take ride comfort to a new level. A lot of folks will like the “no crack back” which should keep unwanted butt-crack sightings to a minimum. And priced at $130.00, these sit solidly in the value category (I just paid almost twice this for a well known ‘fashion’ brand…) 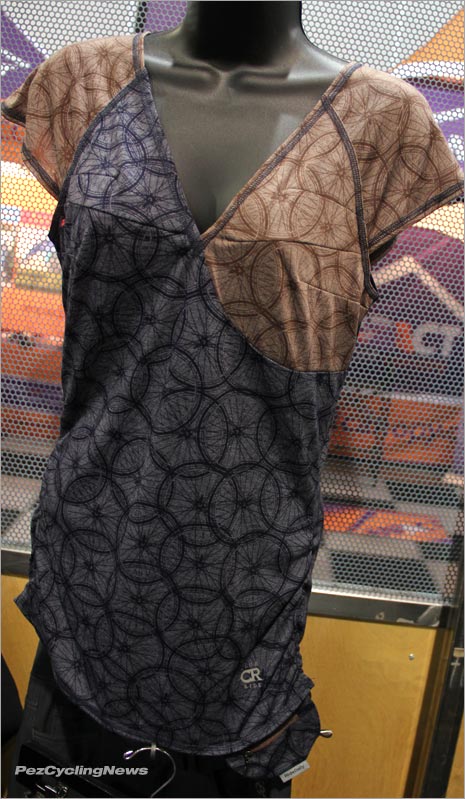 With both the men’s and women’s lines looking a lot more stylish than I’ve come to expect from most other brands, it’s clear Club Ride is offering fit people a way to look good without hiding under the oversized box cut layers that have defined cycling-oriented offerings in the past. I think these guys are onto something…

CHAMPION SYSTEM
In just six years, Champion System has taken a pretty big chunk of the custom kit market as their own, and have been instrumental in the overall growth of the category too – being one of the first (maybe THE first) clothing brand to offer only custom kits, well priced and well made.

Instead of taking their designs to someone else’s factory, (who’s usually producing kits for the competition), Champion System actually owns their factories (two of ‘em) in the Far East, and have full control over the production process. As their business has grown, so have their offerings: in addition to their growing cycling specific lines, they also launched a whole new triathlon and run line, in addition to their wide range of custom casual wear. 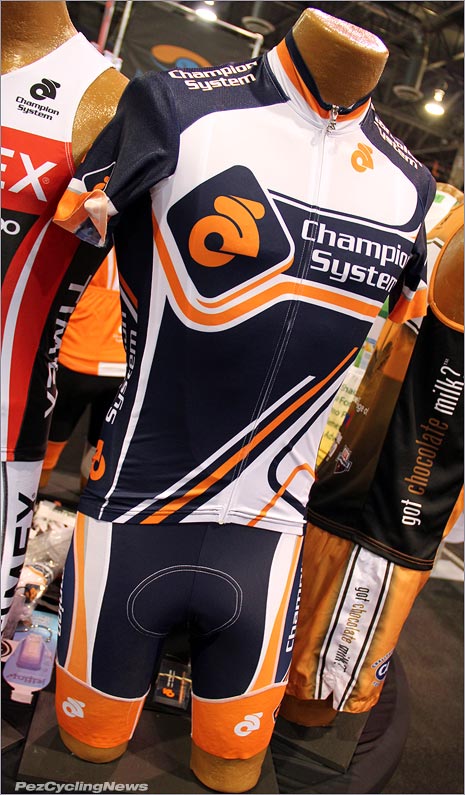 Most of you have seen their Custom CS Elite cycling jersey by now, also worn by the Champion System pro team. It’s the same jersey you can buy for your own team or club, available online for just $100, and it’s a strong value proposition. While this model is only available in standard race cut, the rest of their jerseys come in either race, club, or women’s cut. Children’s cut are also available in some jersey styles. Zippers are ѕ, Ѕ, or fully hidden zipper.

Sleeves are ultra-sound cut with silicone injected grippers, which eliminates some weight and bulging arm bands, and are made from a breatheable Italian Lycra fabric. Air flow and temperature regulation is aided by vented side panels and vented upper back panel. 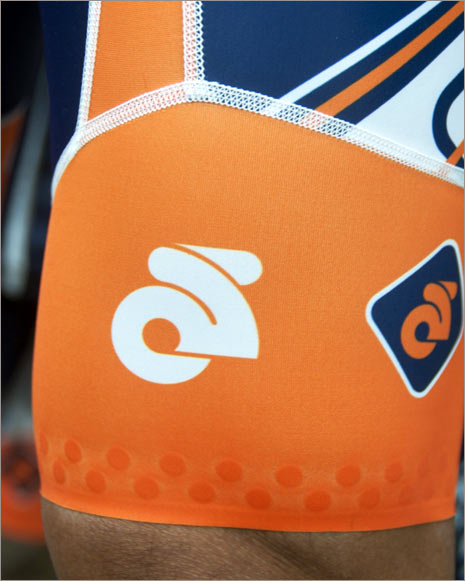 Custom CS Razor Bibshorts are another solid value piece that also sell for $100.
The little bumps you see on the lazer cut leg bands are silicone injected grippers that work with the fabric’s inherent compression to hold the legs in place, and again offer a lower profile where the short leg meets your leg. 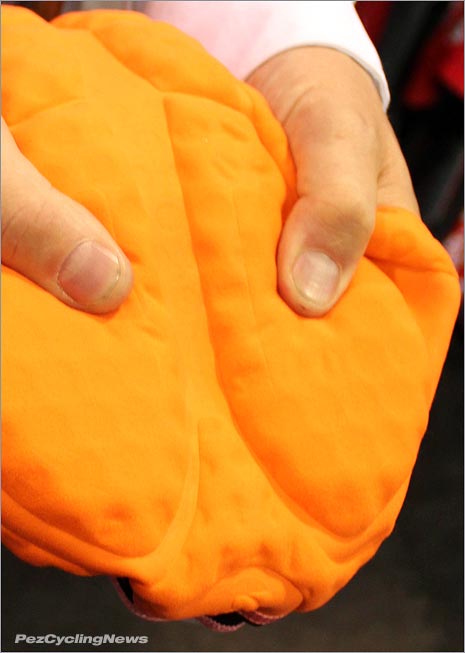 The chamois is made in Italy to Champion System’s specs – this is the Endurance pad, a dimpled interface, multi-density, 4 way stretch elastic chamois, seamless, offering better comfort for longer rides. Also offered is the Performance pad, with a lower profile look and fit that’s often favored by racers. 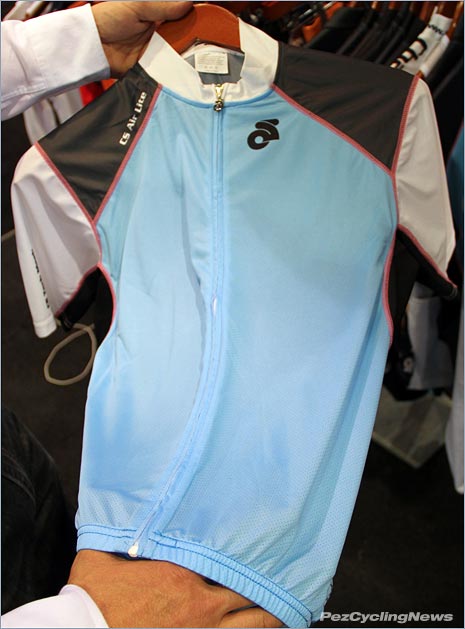 New for 2013, the Razor Lite Jersey ($108) features multiple materials: ultra lightweight CS Helium fabric on the front, CS AirLite fabric on the back and shoulder panels and CS TechMesh on the sleeves – all of it sewn up in comfy and stylish flatlock stitching. Champion System is targeting riders beyond the race crowd with this one – basically anyone looking for solid comfort and fit. 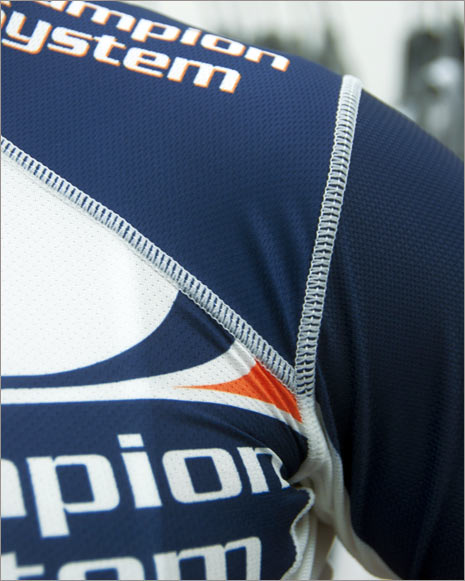 The ‘Set in’ sleeve (also offered on the Razor Lite jersey) is a cool feature that offers a modern update on a traditional design. Helium material on the front is super light and offers lots of breathability. 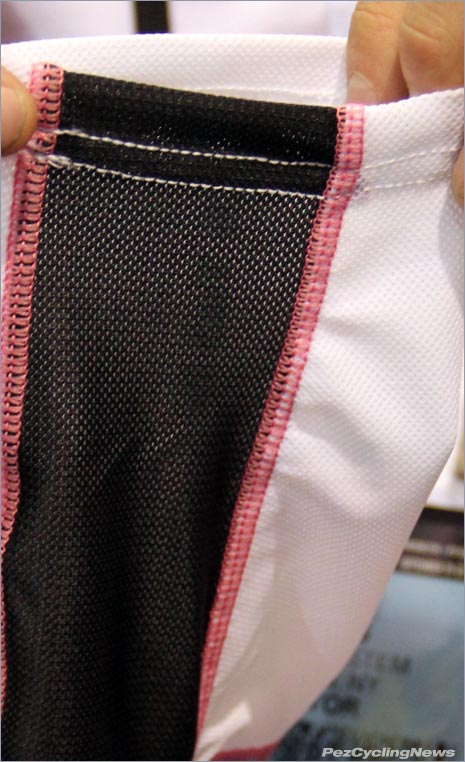 CS TechMesh sidepanels extend all way to the end of the sleeves – increasing ventilation under the arms. It’s nice to see some more technical features, fabrics and designs being offered on custom kit at decent prices being, and for the average club or team, Champion System does offer a great opportunity to look the way you want.