With so much on display at the Interbike 2015 floor, the best way to savour it all is in small bites – here’s some of the coolest gear from Lynskey Performance bicycles, OTTO Tuning Systems, DeFeet socks, and Smith Optics.

OTTO TUNING SYSTEM
One of the coolest ‘small bits’ I saw was from Portland-based Otto Design Works – who’ve recently launched an iphone app that makes tuning your rear derailleur as easy as following the Siri-sounding female voice’s directions. I pride myself on still knowing how to tune my derailleurs the old fashioned way – by hand and with a certain feel honed over some 30 years of doing it myself. But even if I think I know what I’m doing, there’s still a fair amount of guess work involved – ie: “do these shifts feel right – or should I twist that barrel adjuster a couple more turns…?” 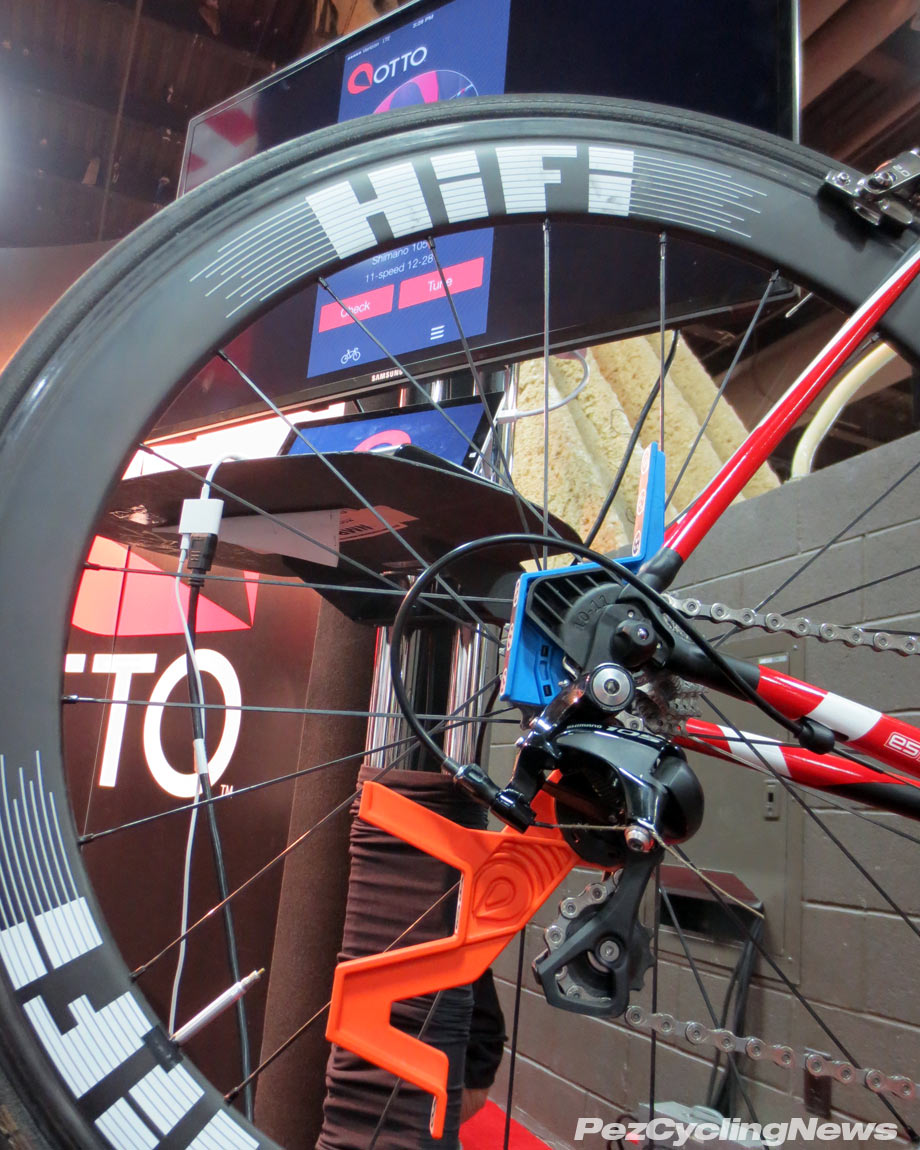 The Otto Tuning System takes this guesswork out of the equation, but using the front mounted camera on the iphone to precisely measure the position of several target dots on two gauges that simply snap into place on the rear derailleur and cogset. The app knows what the desired placement of these targets is for ideal shifting, and tells you exactly how to adjust your rear mech to acheive this perfect alignment. 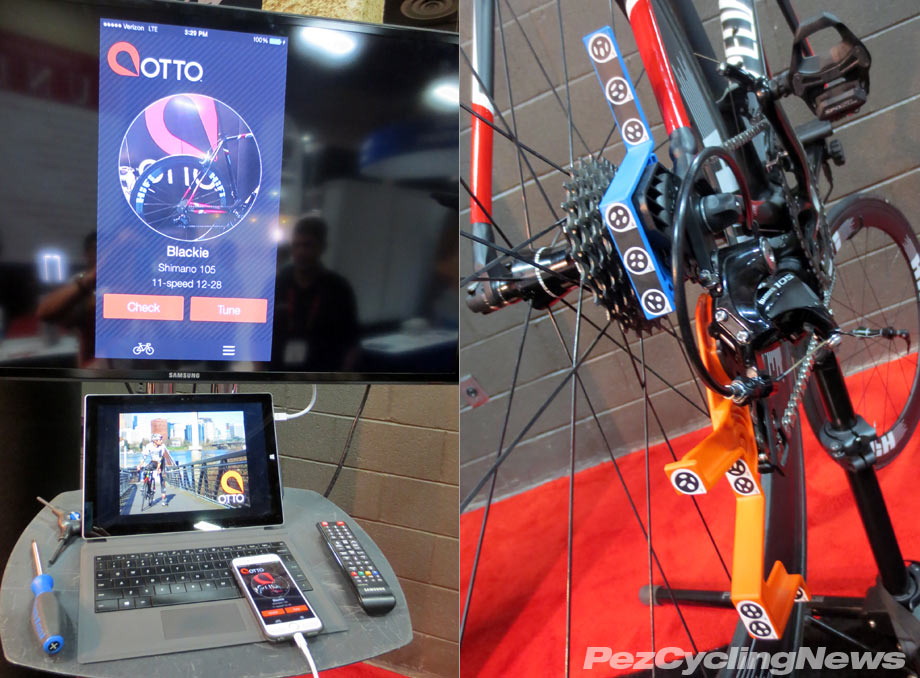 The app then instructs you through a series of easy to follow steps that set the tension in the rear derailleur cable, set hi- and lo- limits, and how many turns and in which direction to turn the barrel adjuster.

Otto Tune lets you choose bike set ups for both Shimano & SRAM, (no Campy yet though), and create and save specific set ups for various bikes. The intial tune takes a few minutes, but once this is done, you can choose a speedier “Quick Tune” that gets you right to the barrel adjustments. 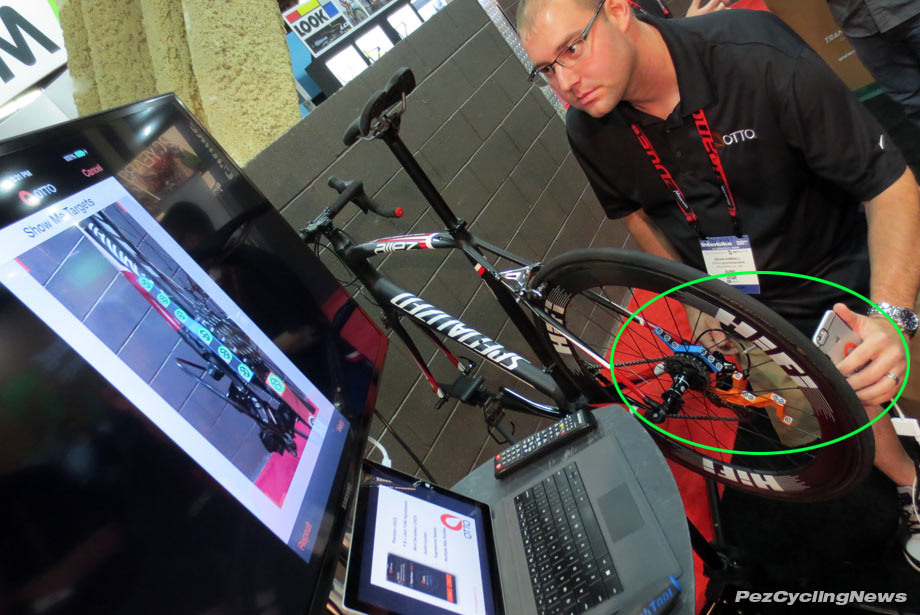 I’ve been been testing a beta version of the app for the past couple months and can tell you it works. I can also tell you the guys at OTTO DesignWorks are continuing to refine the code and are updating it almost weekly to make it as good as possible.

Search OTTO DESIGNWORKS at the Apple Appstore for the free app, and buy the required gauges direct from OttoDesignWorks.com/store/catalog for US$39.00. They’re made with kevlar for extra durability, weigh next to nothing, and are available for 11 & 10 speed drives, and also 9-speed.

LYNSKEY PERFORMANCE BICYCLES
We’ve long been fans of the Lynskey family’s namesake custom titanium brand, from even before they built me a gorgeous custom painted original Helix model with its distinct spiralled tube lengths, through their evolution to more entry-level priced titanium like the Viale Light Touring rig we reviewed earlier this year.  But to see the full line on display at Interbike was like a titamium-hued Christmas in September. Fat-bikes, skinny bikes, full-suspension, cross, road models galore including an updated Helix, their new top-line racer the R460, and a kickin’ retro build called the Legacy to mark the Lynskey family’s 30 years building ti framesets and bikes. 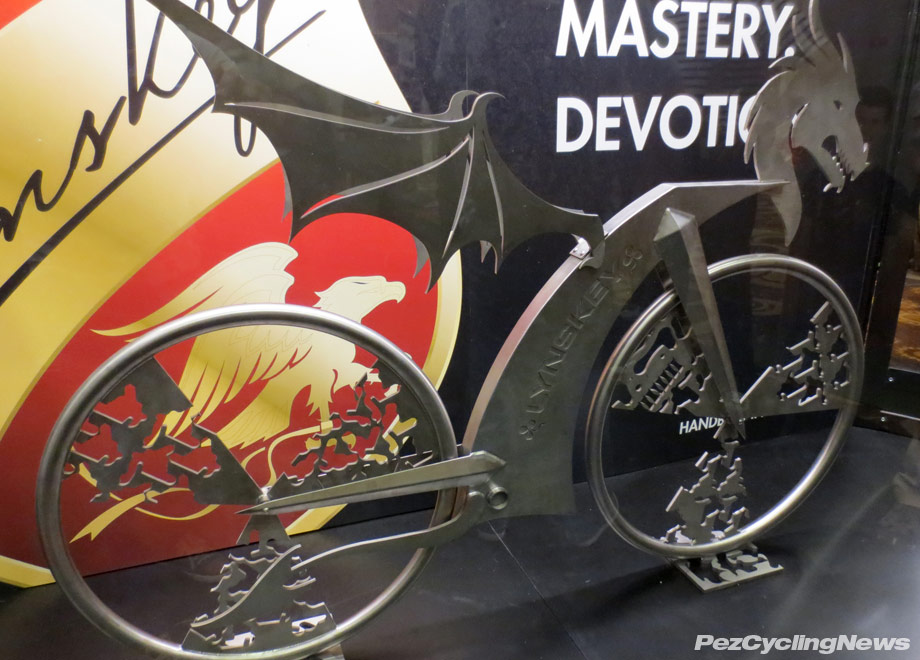 Lynksey’s concept art piece at the show entrance was the very first photo I snapped at this year’s show.  One hundred percent titanium, it was built to show off their skills at forming the stiff but absorptive metal into a variety of shapes (technology applied to their bikes).  The spokes are what’s left when dropouts are cut from ti sheets, the ‘tires’ started as straight tubes, and pieces were cut using their water jet machine which uses an extremely high pressure jet of water and sand particles to precision cut titanium. 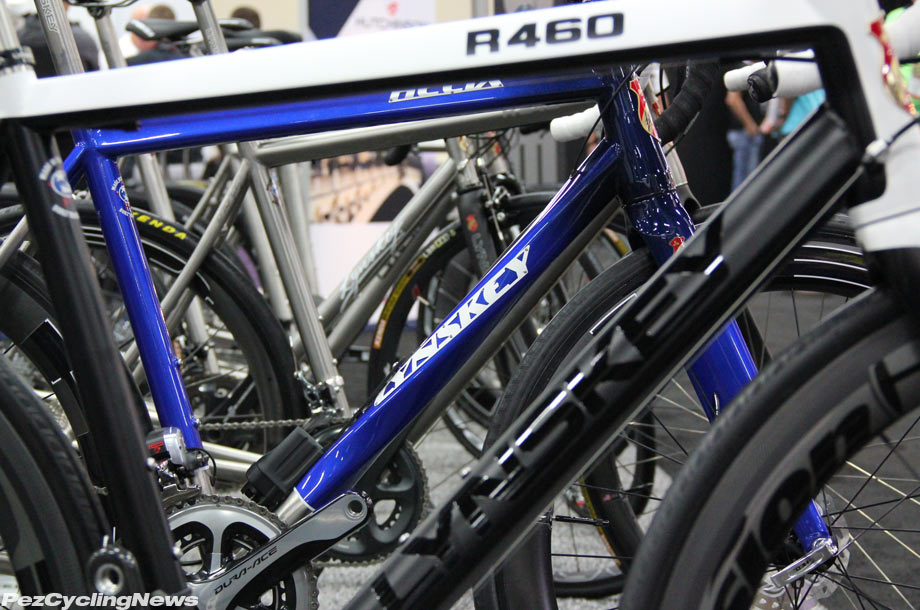 At the top of the heap is the full-race R460, Lynskey’s stiffest bike yet.  The titanium 6/4 Super tubes are oversized and shaped with purpose – the triangular girth of the downtube is plain to see below, while the top-tube is also tri-shaped to add stiffness.  The fork is Lynskey’s own design “Pro Road Carbon #2” model, weighing 348g with a 1.125 to 1.5 inch tapered steerer tube – ensuring direct feedback from the road, and delivering instant response to rider input.  It’s wide enough to handle a 28mm tire too. The tight rear triangle is also built for speed – that’s quick acceleration and direct power transfer.  And with pricing at US$3500 (frameset), I’d expect to see more than a few of these show up on race day.

Lynskey’s expertise in titanium – creating different levels of compliance through tubeshape, making round tubes from flat sheets of titanium, or round tubes that are squared  and / or twisted – has put them at the forefront of ti design.  Add to that the fact that titanium is no longer as expensive as it was in the early days, and this wunder-metal  is appealing to a much wider scope of riders than ever before. 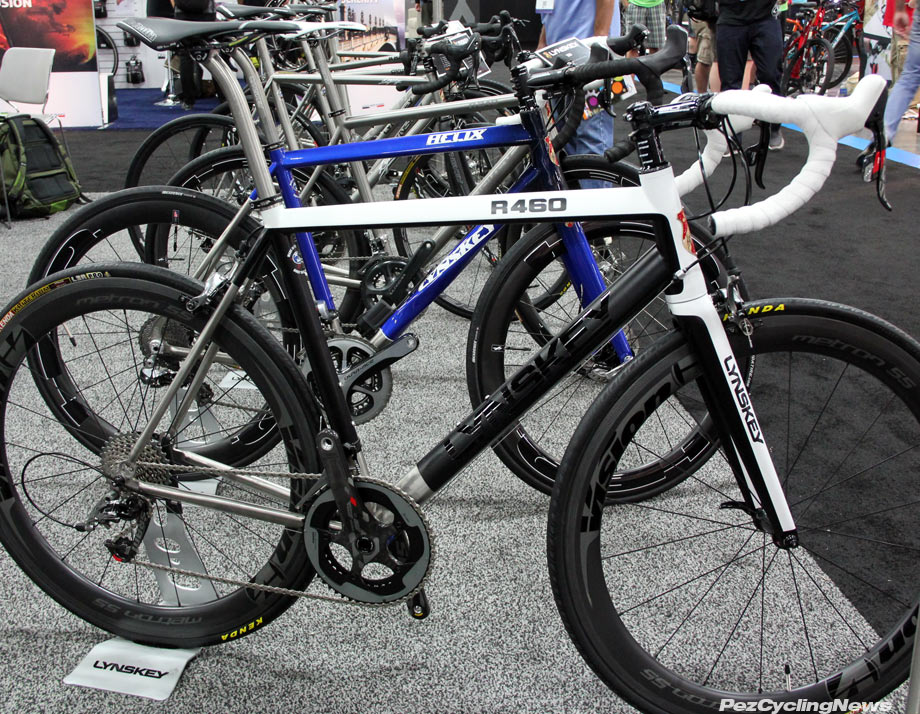 Floor buzz this year really seemed to be about “gravel bikes” – I even had a long discussion with another brand’s marketing guys about what differences (if any) exist between gravel and cross bikes.   While ‘gravel’ might be a sexier term designed to sell more bikes, (like ‘free ride’ did for mountain bikes back in the late ’90’s), there’s no denying both are an awesome way to up the fun-quotient of riding.

Lynskey’s Cooper CX is billed as “Cross ready but can handle other functions”…  One thing I like about this crew from Chattanooga is their complete lack of marketing fluff – they tell it like it is.  Hydro-ready disc cable routing, fender mounts, a tapered head tube – this one is built to take you wherever you want to go – almost literally. The frameset will sell for just $2000 – impressive. 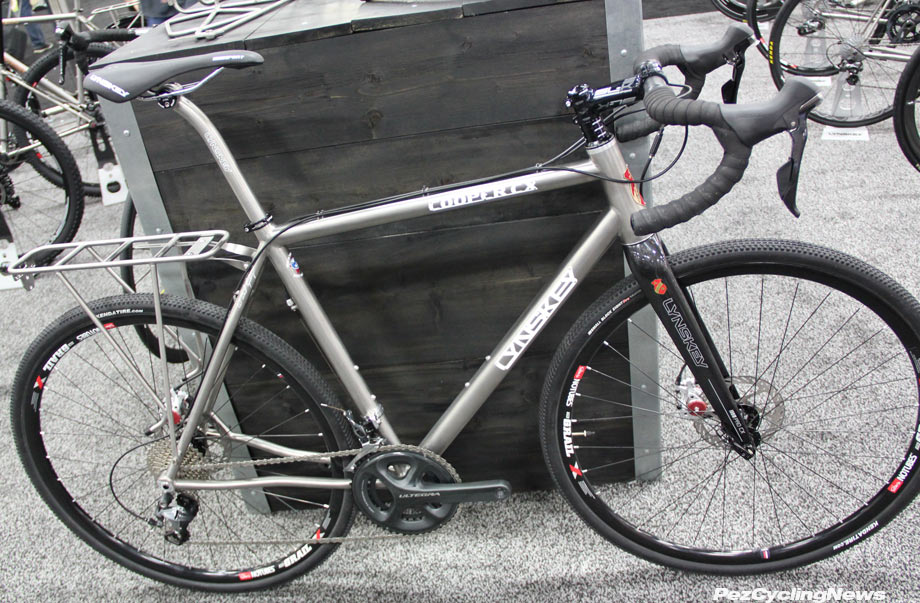 The rear end shows off beautifully curved stays, and if you really want to treat yourself – that brushed titanium rack can be yours for just a couple of Benjamins (a likely much better investment for your $200 than a lot of other things in Vegas). 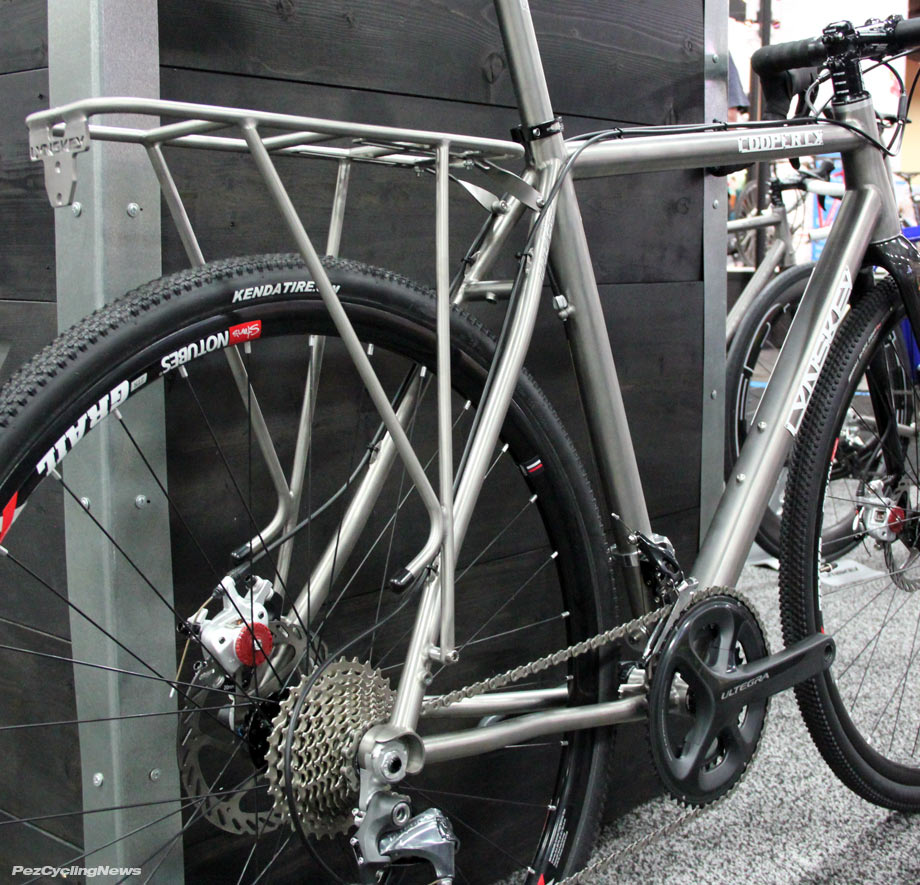 But the bike I most want to ride is the Legacy – brand new to the line, but built in very classic road geometry to celebrate Lynskey’s 30 years in cycling.  Just looking at it conjures images of conquering blizzard-bound passes in the high mountains, adversaries dropped and left for dead as the glory of the epic ride awaits in the form of a cold frothy beer served by a comely bar-lass at the finish line – wherever that might be. 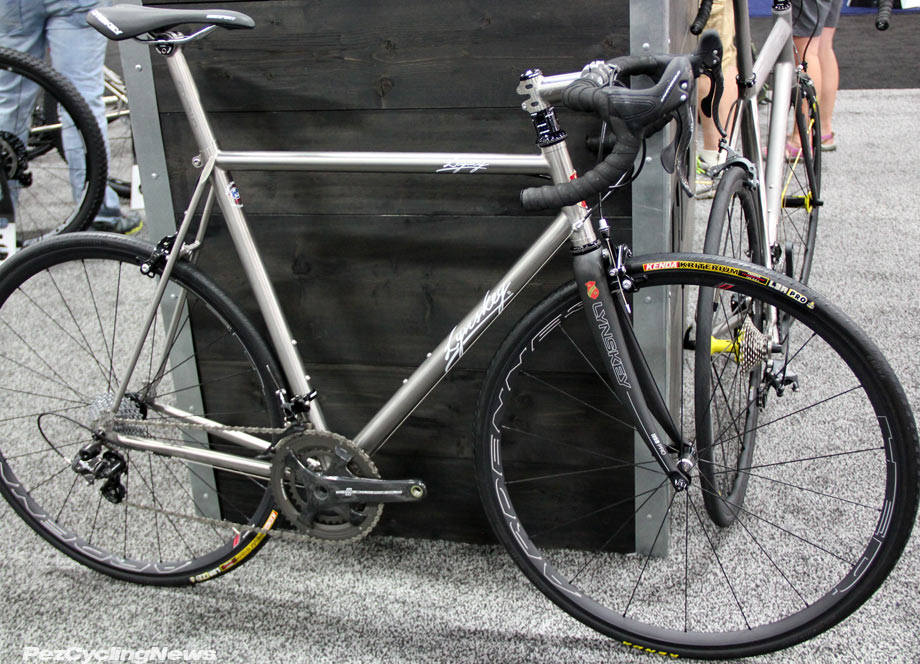 At just $1700 for frame/ fork, this could be the best titanium spend you’ll ever make.  And adding to the caché of an already special bike, those 30 year anniversary dropout details will only come around once.

Customers can order all models direct from the Lynskey website or go through a authorized dealer. See more online at LynskeyPerformance.com. 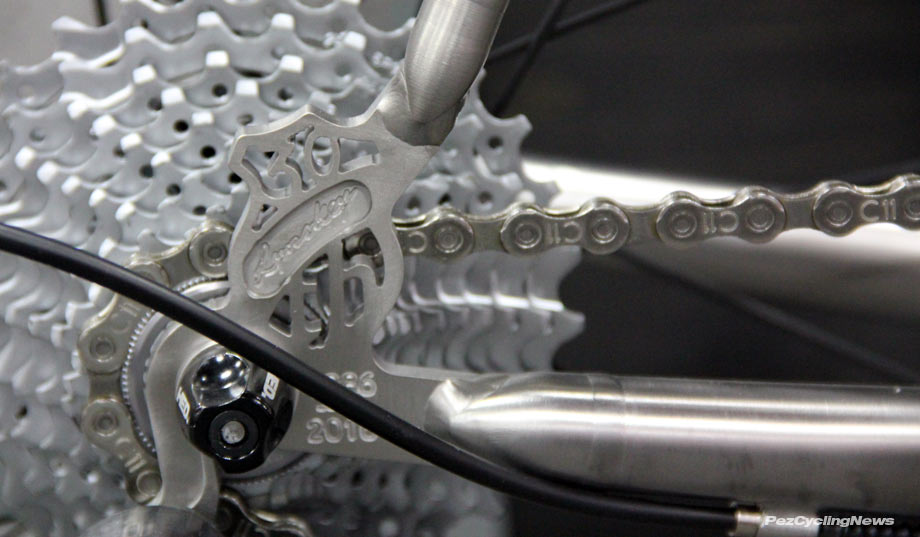 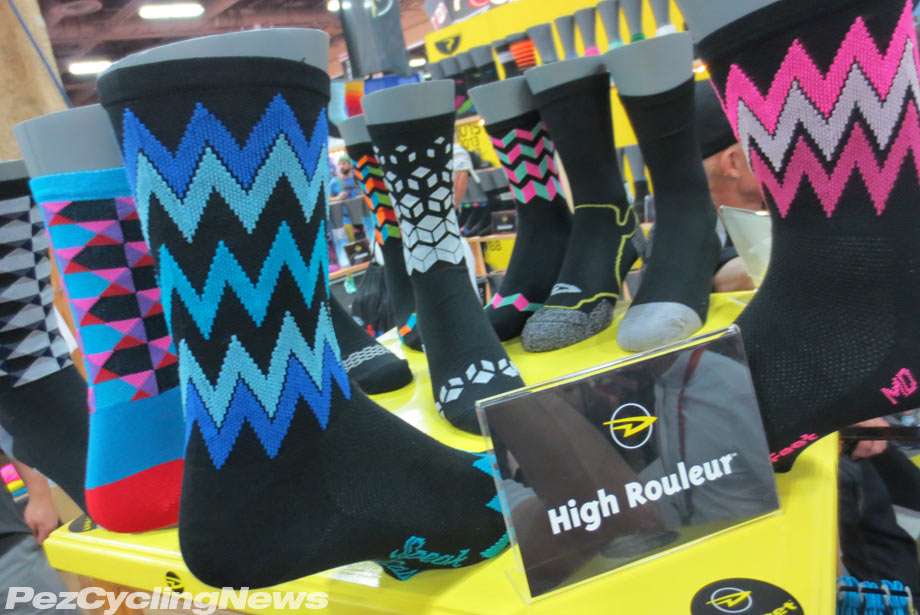 And nowhere was this on display more than at the DeFeet booth – where the launch of the new High Rouleur socks line turned up the color of what has for years been the most colorful booth at the show.  Built on their extremely breathable, comfortable, and durable signature Aireator sock platform – the High Rouleur line splashes bright colors and eye catching patterns and designs around like they just don’t care.

At first glance Shane Cooper and his crew from North Carolina may not seem like your typical roadies, but true to the form of cyclists everywhere, the freedom of riding on two wheels and the bond it rewards us with is a common ground that those of us on the inside know and love and those on the outside should really learn more about. 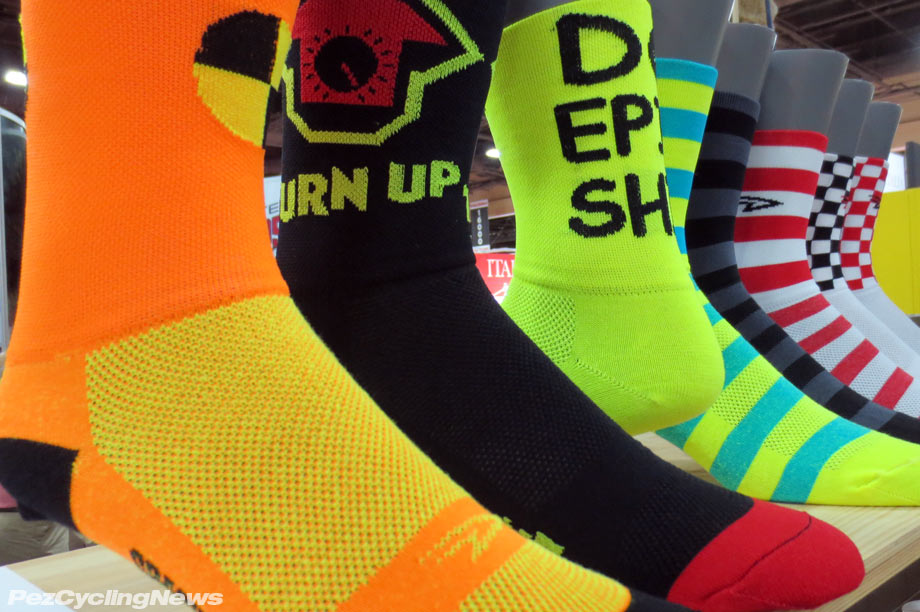 And with shots of moonshine being served for the asking, it was no wonder the booth was always packed.  But onto more tangible benefits, DeFeet have been doing great things with socks for years now, and are one of the few sock brands who people can actually name.  They were the first to use CoolMax EcoMade™ fiber (made using recycled plastic water bottles) in their socks. 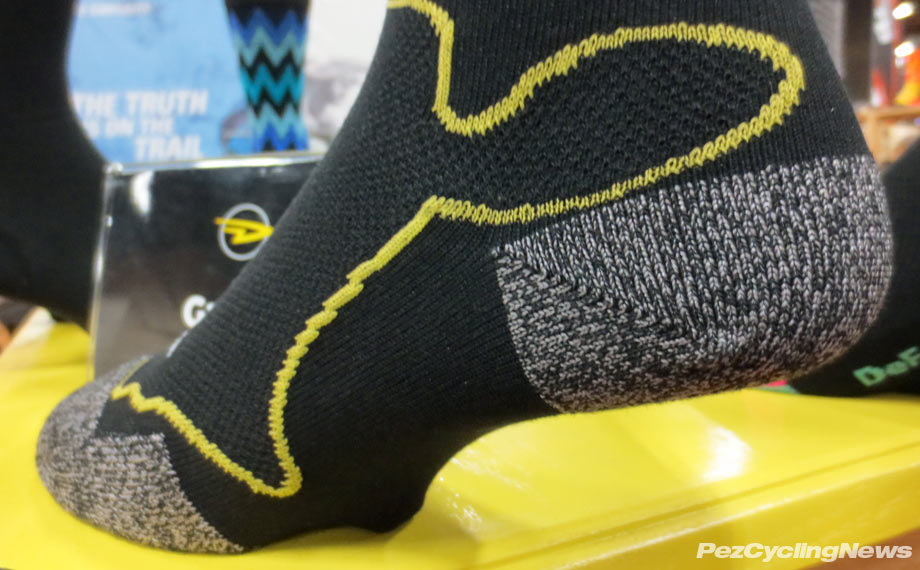 The gravel version of the High Rouleur uses Cordura in the heal and toe for extra durability.

Their custom sock program is awesome – because no custom kit is complete without the socks to match – but what’s better is how they combine the right amount “that’s cool” with some damn fine sock making technology to make socks that are indeed coveted by cyclists in the know. 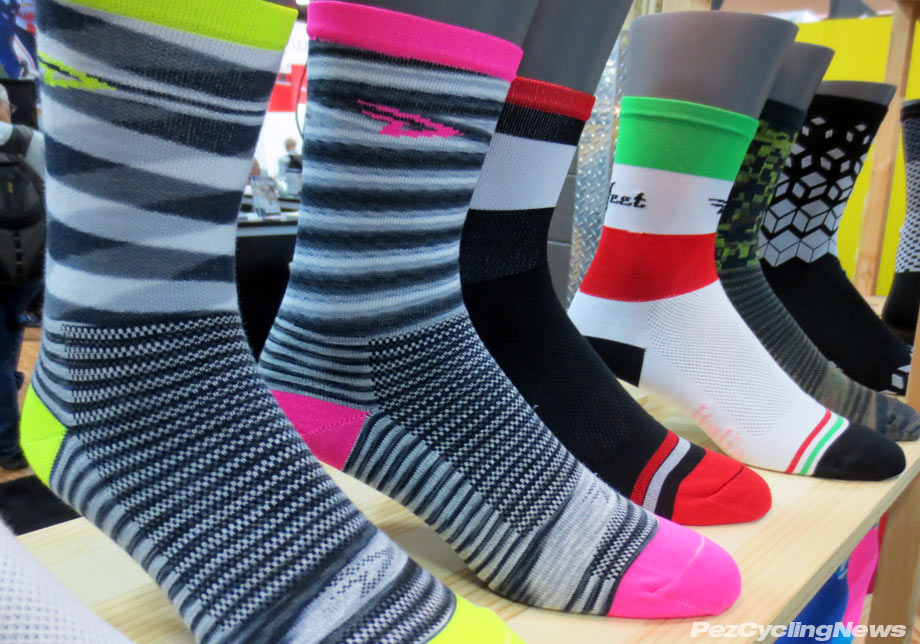 Available in a bunch of different heights for men & women – the most popular are 3″, 4″ and 5″ inches, but don;t forget woolies for the winter months, and a solid line of train 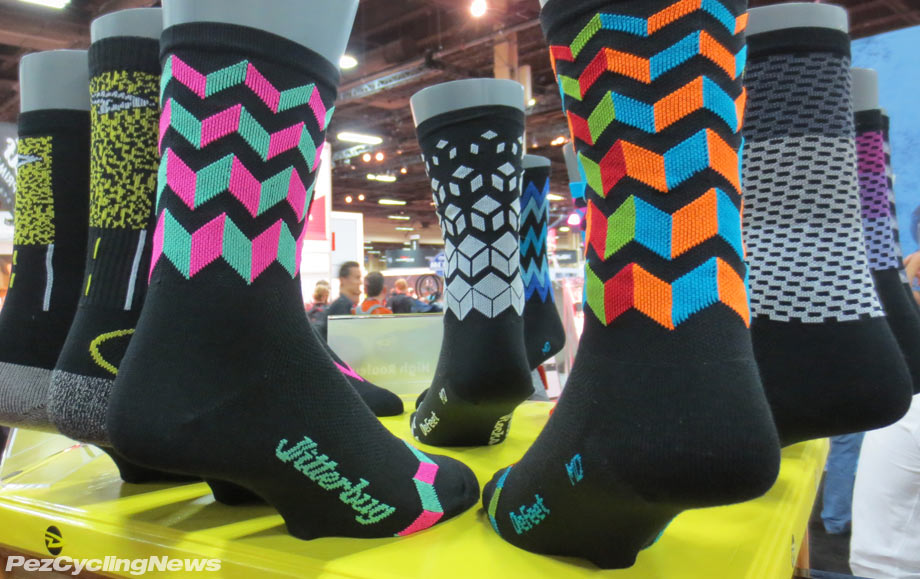 Check out this cool video – pretty much says it all…

The Adventures of the Graveled High Rouleur from DeFeet on Vimeo.

Based on the constant crowd squishing into their booth – the brand has never been more popular, and certainly never cooler.   They’ve been the official sock of PEZ since 2003, so I admit that I’m biased, but when the product is this good, I have no problems being loyal and telling my friends about ’em.
See more at DeFeet.com

SMITH OVERTAKE HELMET
Long time snow-brand turned moto- cycling- water- lifetsyle- brand SMITH OPTICS – well known for the goggles and glasses, has taken on head gear in a big way – using knowledge gained from protecting heads in a bunch of disciplines to their road & mtb lines with distinct looking styles that also show off a different take on technology. 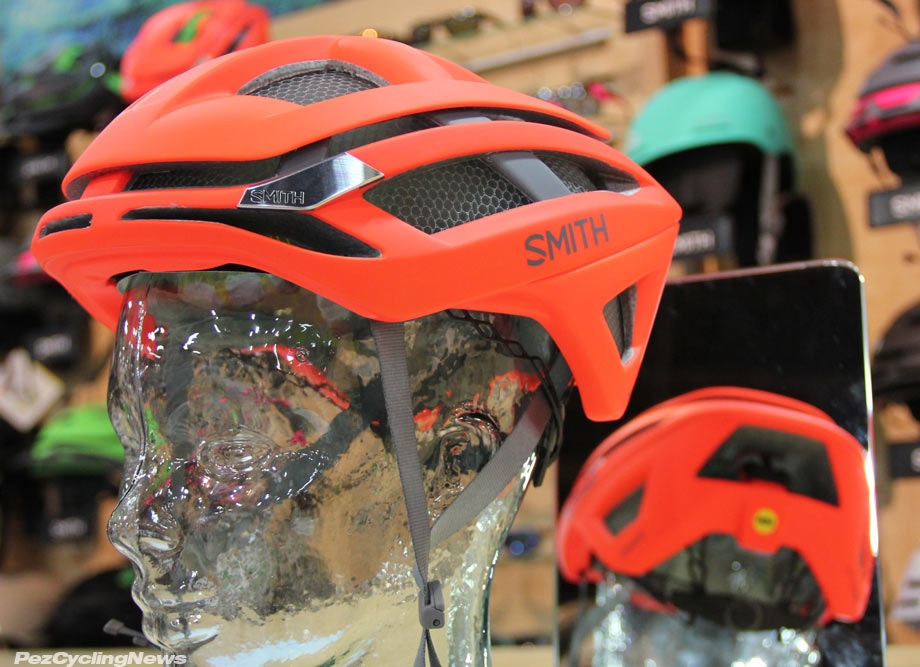 Launched last year, the Overtake Helmet certainly looks different from other lids, and if the dozen or so different colors don’t catch your eye, the futurist styling might.  But there’s more here than just aesthetics.  The skeleton framework uses less struts than most other brands, which allows the size of the vents to be much bigger in several areas.  Helmet integrity and crash protection are maintained by the unique Koroyd honeycombed layer, which replaces a fair amount of the usual EPS material most helmets use to absorb impact shock, and is both structural and functional as it facilitates airflow throughout the helmet. 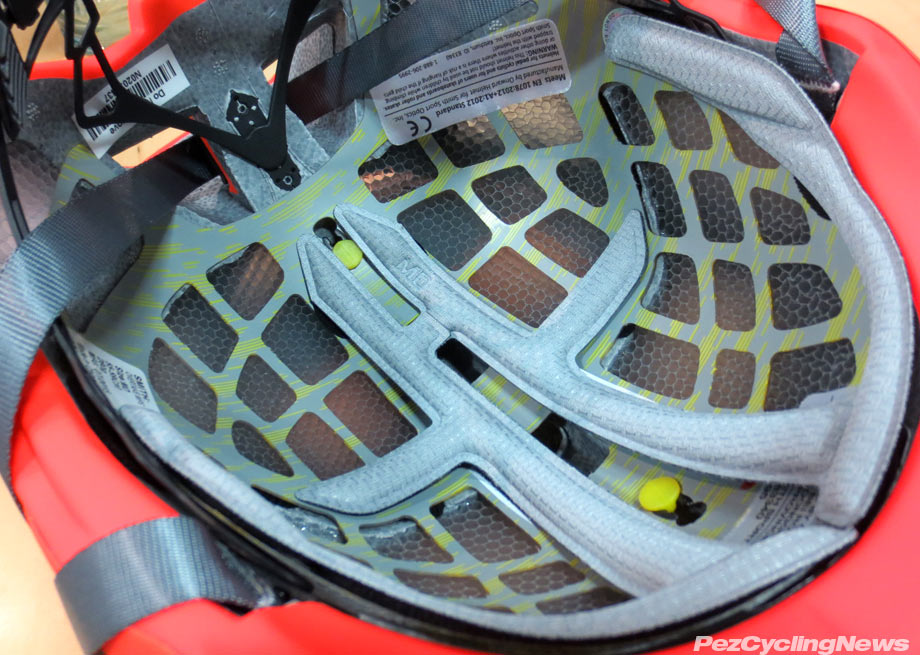 Instead of starting with a solid block of foam and then cutting channels through it to direct airflow, they’ve really worked from the outside in on this one, using a minimal skeletal structure only where it’s needed, then filling in gaps with the Koroyd to create what in essence is a highly breathable head protector.  Smith says that this exceptionally large venting does a good job of allowing hot air to escape the helmet.

Retention is via Smith’s Boa 360 system which wraps securely around your head, and doesn’t just cram your noggin towards the front.

There’s a MIPS version offered too, (as most serious brands are doing these days), and that view inside shows just how much (and how little) surface actually contacts your head. 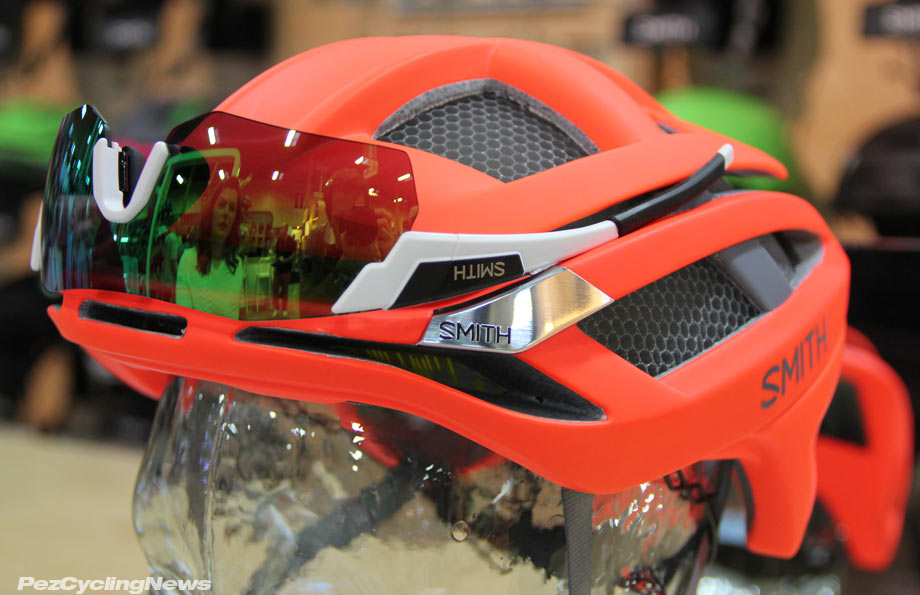 One feature I really liked was their take on eyewear stowage.  I’d expect nothing less from guys who do eyewear as well as Smith, the clean mating of glasses into the helmet structure should win ’em a design award.  Priced at $250 (or $290 for the MIPS version), this one shares shelf space with the high end, and should also have high appeal to anyone wanting something different looking.

Sidi Remains a Major Player Until the End of the Season