With so much still to see from Interbike 2015, we’re gonna be at this for a while yet – here’s more cool gear from Bikase, Scott Bicycles, Primal, and Bell helmets.

PRIMAL Clothing Rebrands and Launches Impressive New Lines & Designs
The more times I return to Interbike, the more new things I discover that I like about cycling – like the growth in recent years of clothing that goes beyond jerseys and bib shorts.  For the last 25 years this crew (although they’re really more like a family) from Denver was known as ‘Primal Wear’.  This year however, marked their massive rebrand as simply PRIMAL – and while that’s what everyone always called them anyways, the changes are a lot more than skin deep. 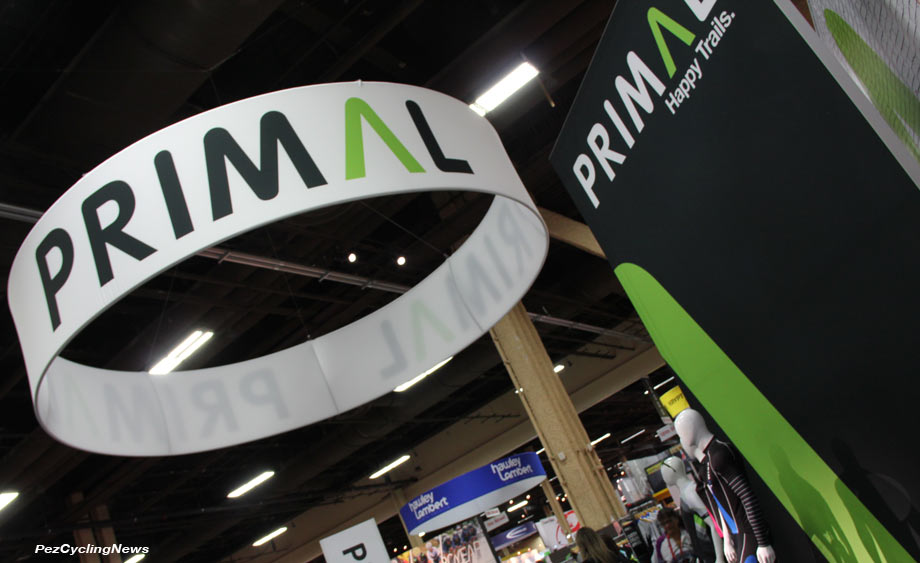 Beyond a very cool new logo with a brilliant green accent ‘A’ and broader appealing tag line (‘Happy Trails’), they’ve repositioned the brand to be more about fun, and the clothes you’ll need to ‘make life as fun as it can be’. The best part is that they’re paying off this lofty promise with clothes and designs that deliver.

I payed a visit to the company headquarters this past June and was let in on the then secret (but imminent) big launch.  I was shown the additions to the clothing lines, and was impressed by what I saw on paper – it was so refreshing to see so many colors and cool graphics that many pieces looked like they could never have come from the cycling industry. 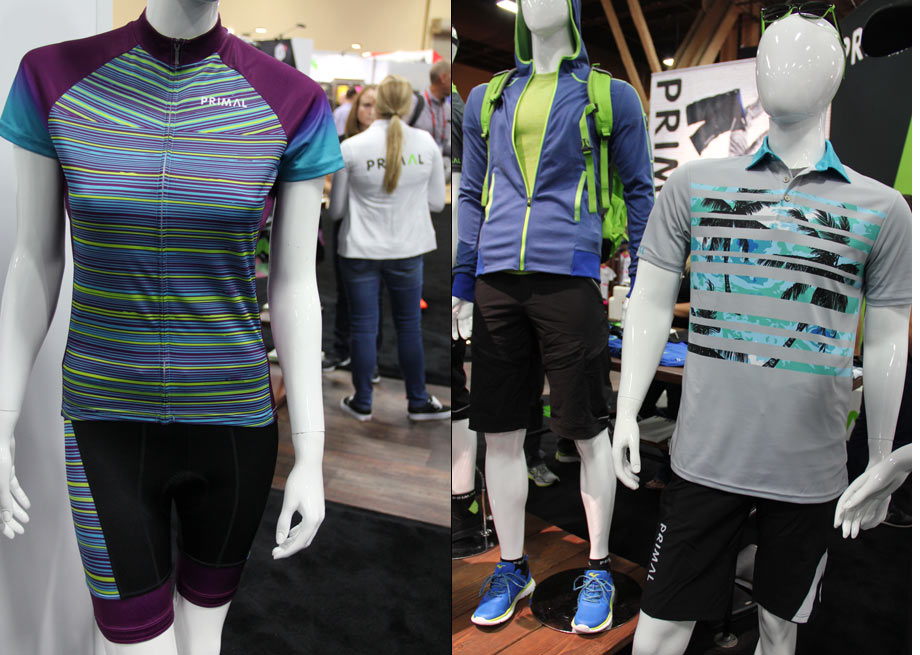 On the show floor and in person the line was nothing short of stunning.  The colors I’d seen on paper were in fact real –  the designs fresh and so ‘not cycling’ that I wanted to ditch the home office just so I’d have someplace to commute to.

Where I’ve seen cycling brands fail at casual clothing in the past is by ignoring the fact that casual clothing needs to be cut differently from cycling togs – because they’re not the same thing, nor intended for the same use.  Primal recognized this early on, started with a blank sheet and designed some really cool off bike pieces like hoodies, polos, and shorts  – the kind I want to wear all day.

Their expanded women’s line includes active wear and lifestyle pieces that should be a hit (at least if Mrs. Pez has any say in it…), and offer yoga and casual wear like tights, capris, sport bras and tops that made to function, but look like you’d buy then just to look good. 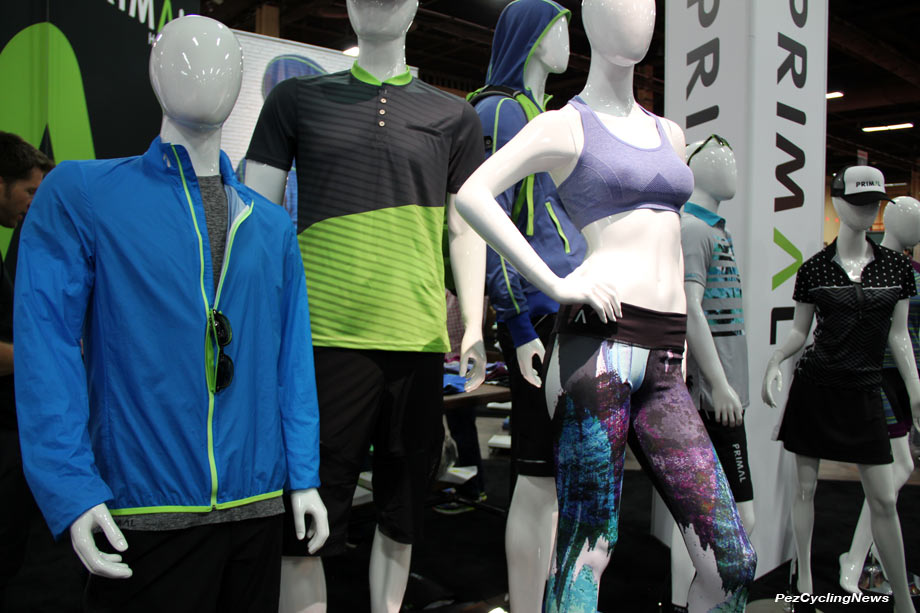 The cool colors and graphic patterns have been carried over to the technical pieces too.  Fabrics and cuts are offered for race lines all the way down to less serious riding – the kind that makes happy trails.  And if that’s mot enough, Primal still offers some killer custom gear thatI’ll bet a huge chunk of you reading this either own or have used at some point.

• See the new website and new designs at PRIMALWEAR.com

SCOTT Shows All New FOIL
If I was at all inclined to hand out awards for things I saw at the show, Scott’s new Foil could very possibly my choice for best looking race bike. Just take a second here and cast your gaze upon the line’s new flagship model… 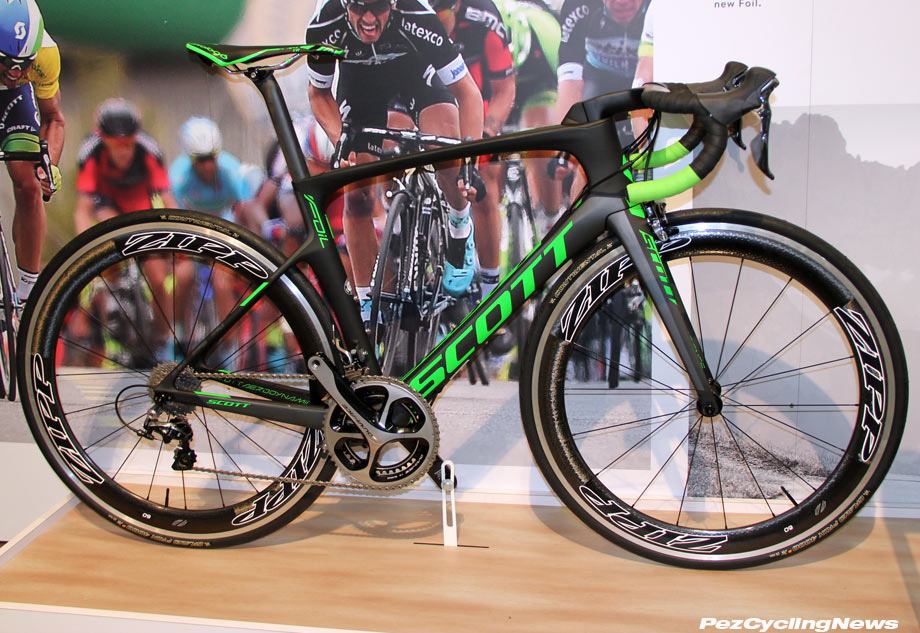 My first encounter with the Foil was poolside in Vegas four years ago, and I was smitten with the sexy aero shaped tubes.  For 2016, the bike has been completely redesigned – only the name is unchanged – and it looks better than ever.  The frame material is their top-line HMX carbon (light & stiff), the tubes are aero-shaped to 2016 standards – meaning they’ve learned a few things in the last four years about aerodynamics the results of which are here and now. 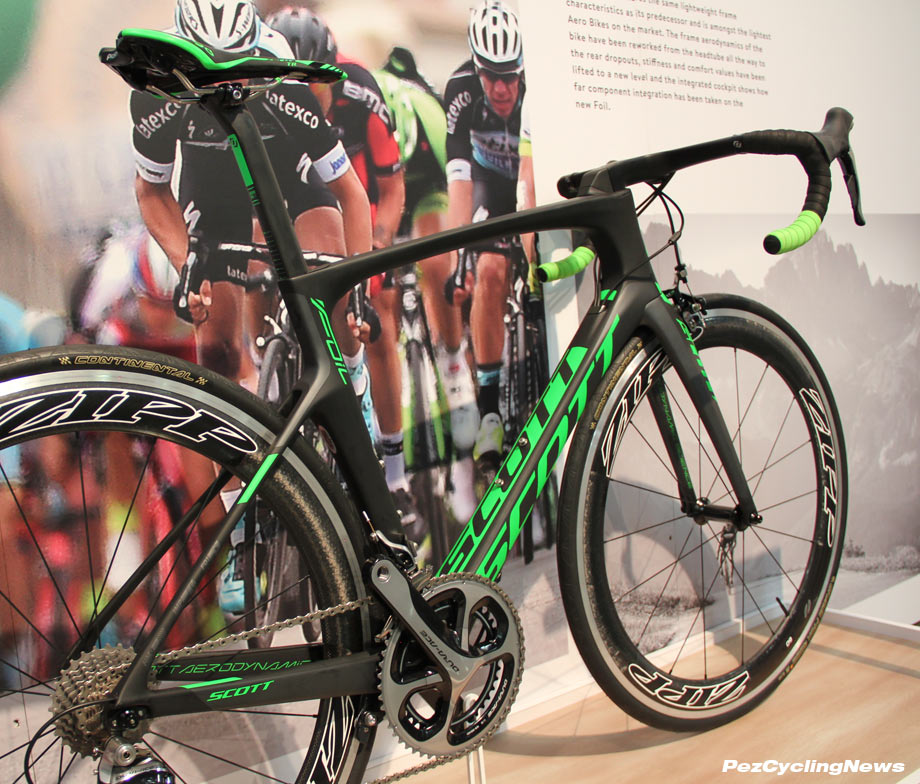 The front end is eye-catchingly new, with the integrated aero-shaped handlebar/stem combo and slick internal cable routing.  The rear triangle is smaller to increase stiffness, shave a few grams, and reduce the side profiles – all designed to make this a much faster ride then ever before. 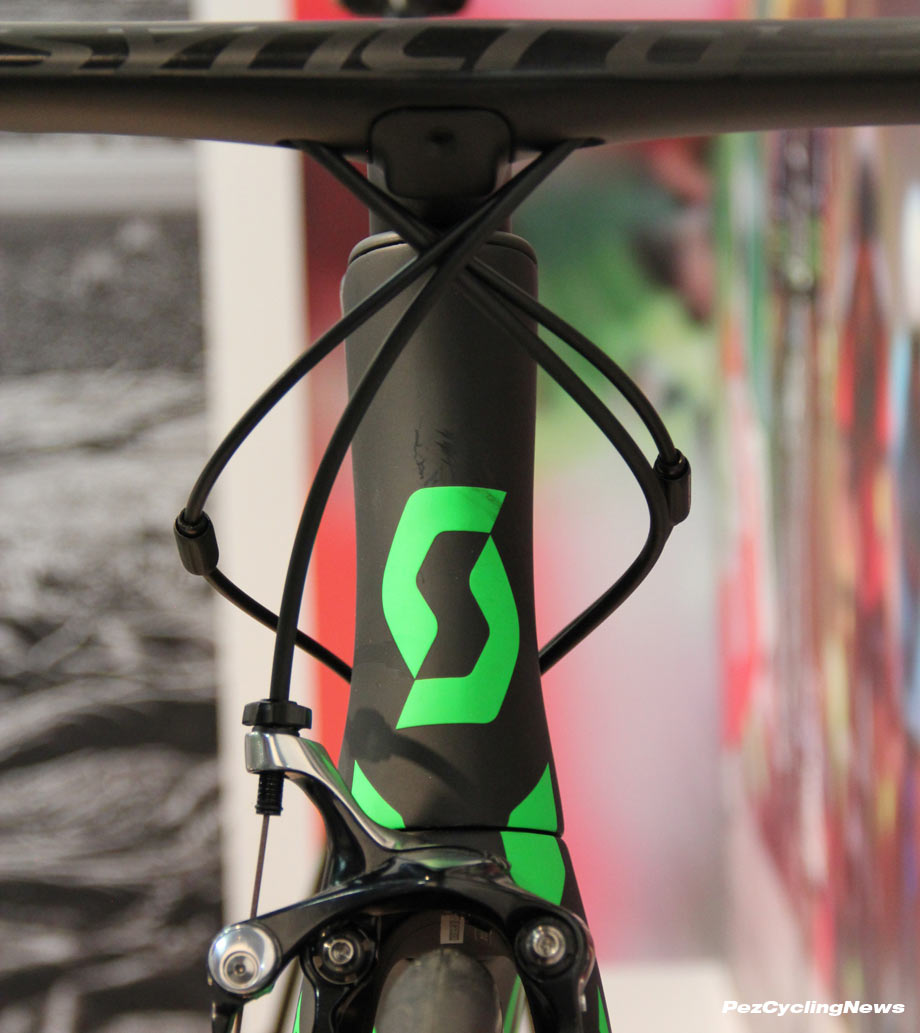 For less than $8000 (1 penny less as suggested by the manufacturer), this extremely hot looking race bike, all 15.3 pounds of it – could be yours.

The first real cycling helmet I owned was a Bell V1 – notable for its cereal-bowl like shape, minuscule chin strap, and toxic glue that almost blinded me every time the sweat dripped into my eyes.  Oh how things have changed in the last 20 years.  Helmet styles and protection that once seemed too far from the future are not only common place, but expected. 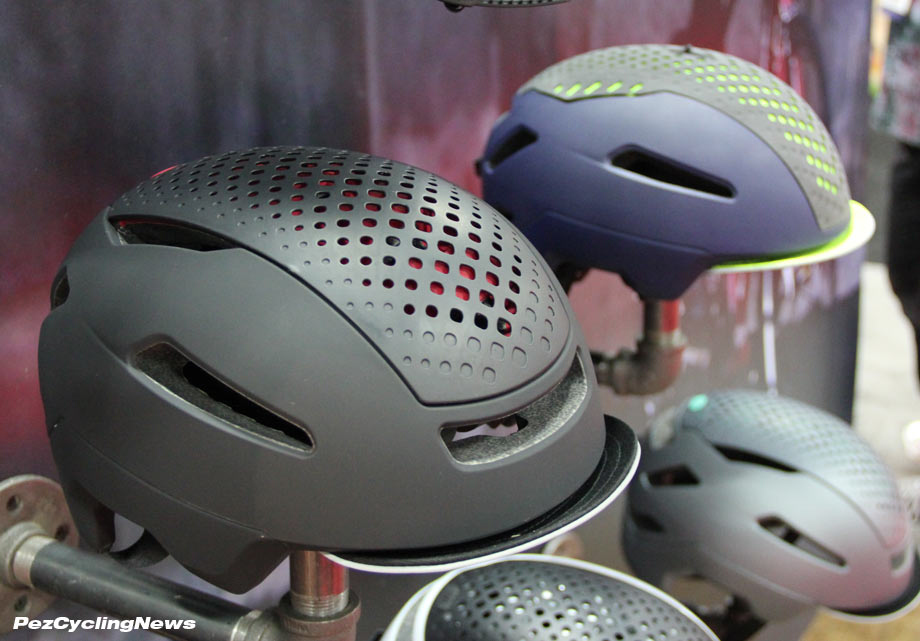 The first lid to catch my eye was the ANNEX – a lifestyle / commuter / street-ish type protector that looks more like a cycling version of a moped helmet.  The gender -neutral shape should look good when you want to look good but not so much like a bike racer.  Under a solid looking exterior are 15 vents, and a pretty cool Active Aero Slider that allows you to close the vents to help regulate temperatures.   It weighs in at 350grams and comes in a MIPS version (Multi-Directional Impact Protection System),  adding a bit more protection with a sliding inner liner that’s been adopted by pretty much every serious player in the lid biz, and features a rear light mount for added safety that makes sense for all helmets. 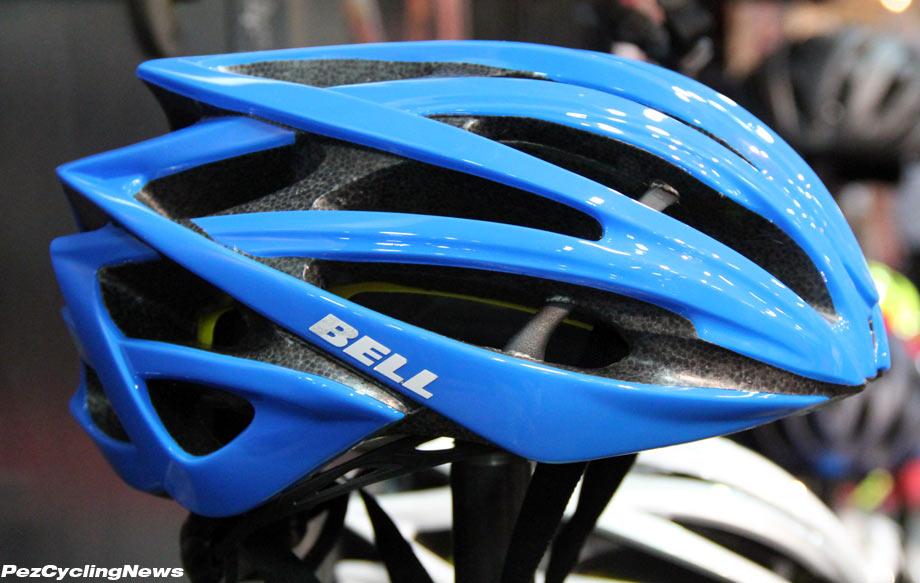 The GAGE is Bell’s top line road racer, World Tour proven by the Lotto-Jumbo pro team, and now also equipped with MIPS technology.  With 26 vents and some nice deep channels to flow the air through, it’s a stylish and functional choice that weighs only 266 grams.

The minimal padding is antimicorbial to fight sweat stink, and will wick some moisture as well.  It uses a TAG fit system (stands for Twin Axis Gear) which adjusts through three positions vertically at the back, and secures around your head with an easy turning roller at the back (see it below). 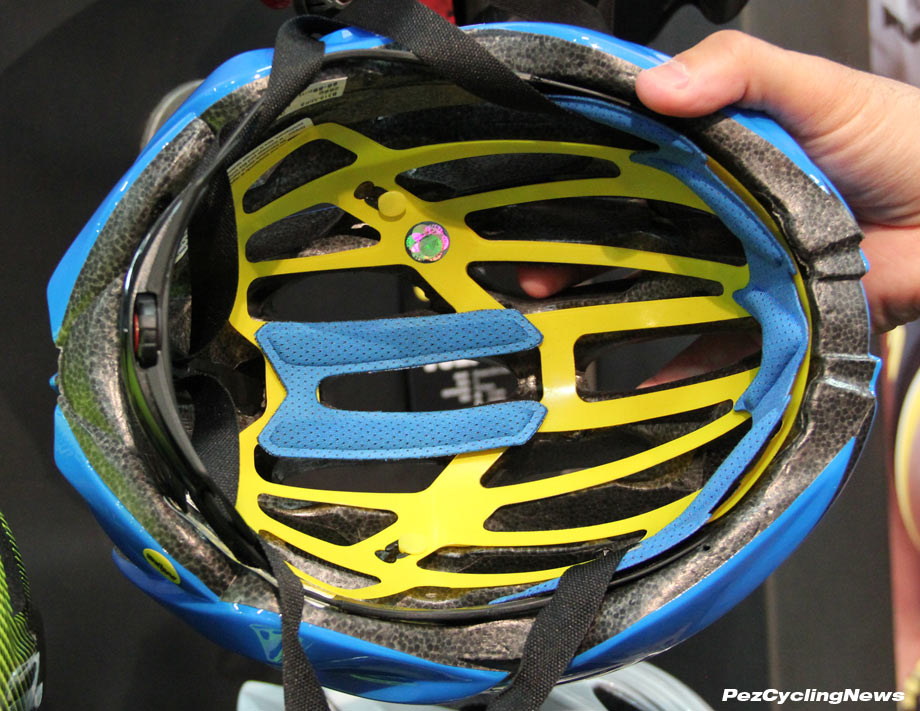 The STAR PRO is Bell’s verison of an aero-shaped road helmet.  I like that it looks more road and less aero than a few other brands, and while I don’t have any aero data to confirm its effectiveness, the common sense of the design is obvious to see  and the’ve got a decent video here that shows airflow around the helmet in a windtunnel. 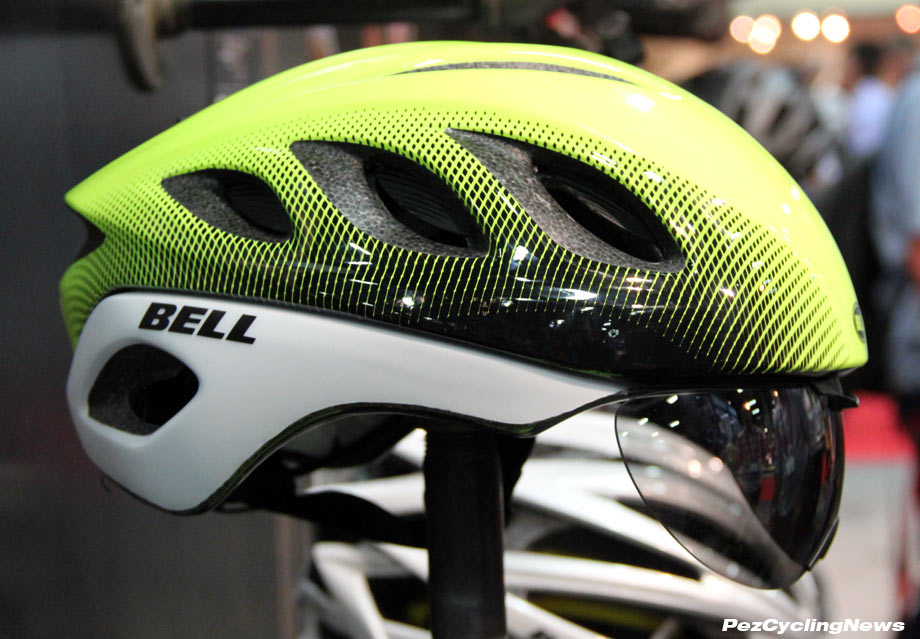 Airflow is managed by hidden vents just above the forehead, and then channeled through large side and top vents (there are 15 total.)  The vents can be fully closed to improve airflow and aerodynamics, and also keep out colder air when you want to stay warm.

The other cool feature is the removable eye shield form Transitions Optical, which automatically adjusts it’s opacity to surrounding light conditions.  It magnetically attaches to the front of the helmet, or can be secured in place above the forehead by the same magnetic connection, making it one of the easiest ways to deal with where to put your eye protection. 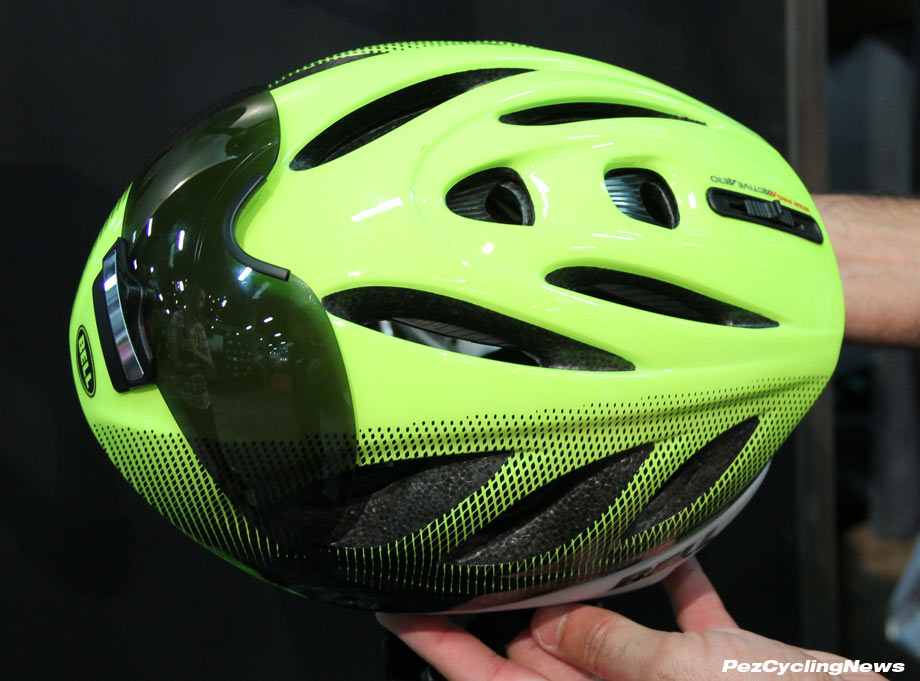 The range includes 10 different models that cover a big range of cycling disciplines.  The SOUL (below) runs 22 big vents, their “Overbrow Ventilation” to draw air up under the helmet front. 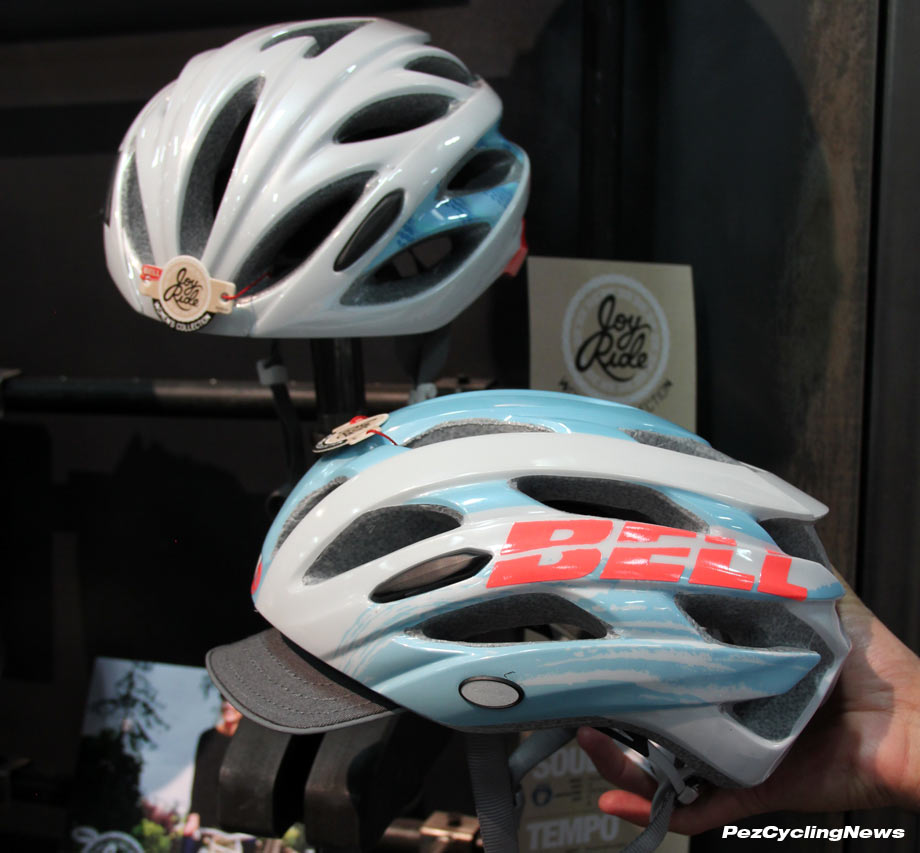 The visor is removable, and should appeal to a lot of women who just aren’t down with the ‘cycling cap under the helmet’ look.  Interior channels are notable to help with airflow and cooling, and several models in the range offer MIPS protection as well. 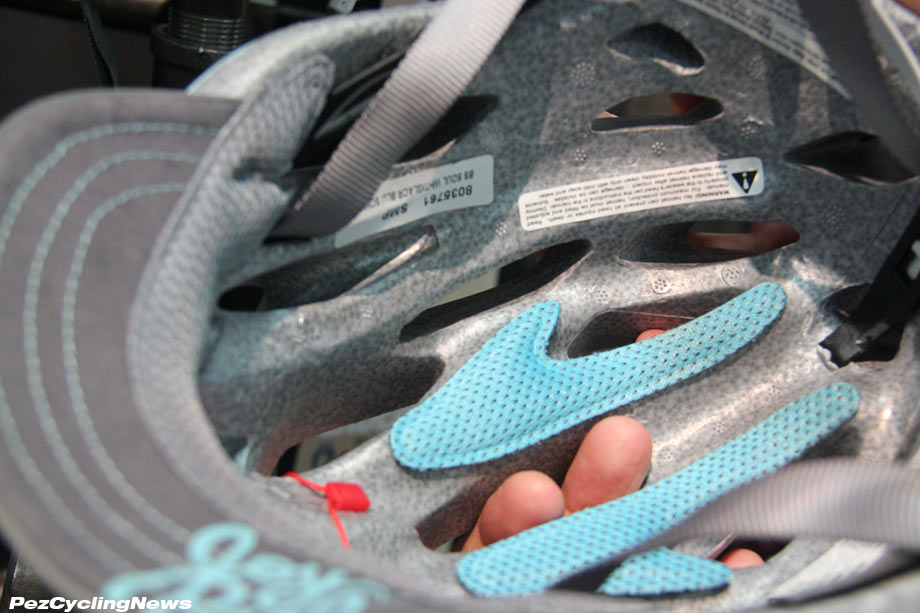 Finally, and while this has little to do with road riding I thought it was just cool – the STAR WARS Collection of the SUPER 2R trail riding / downhill helmets.  Dress yourself like Boba Fett, and Imperial Storm Trooper (below), or go full Darth Vader with the SEGMENT model styled after old school skateboard lids. 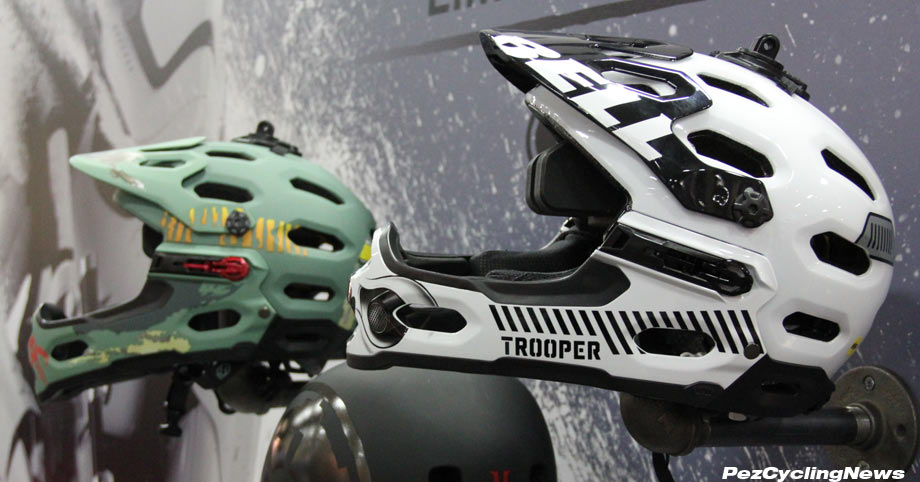 BIKASE Goes Lux
I’ve been a fan of Bikase’s case for bikes for some time now.  The brand is small, but owner and chief designer Chad Buchanan has for years been making inexpensive cases to mount iphones (in their ever changing evolution of shapes and sizes) and other innovative case designs to mount and carry everything else on your bike.

But what really caught my eye at what was my ‘hardest to find booth’ at the show were these two leather and canvas bags – the courier bag on left and pannier style on right.  Chad designs as much from his heart as he does form his head, and these two are clearly labors of love – he didn’t even have prices worked out yet – and even asked me “what do you think I should charge?” 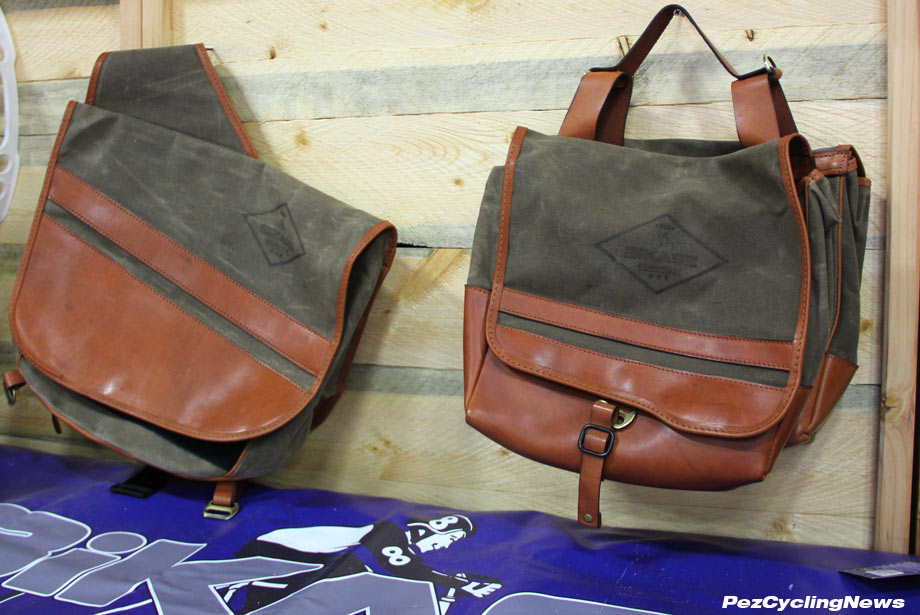 My advice was to follow the lead certain automakers who were well known for high quality but well priced products, and luanch a second brand to establish a presence in a more luxurious category. 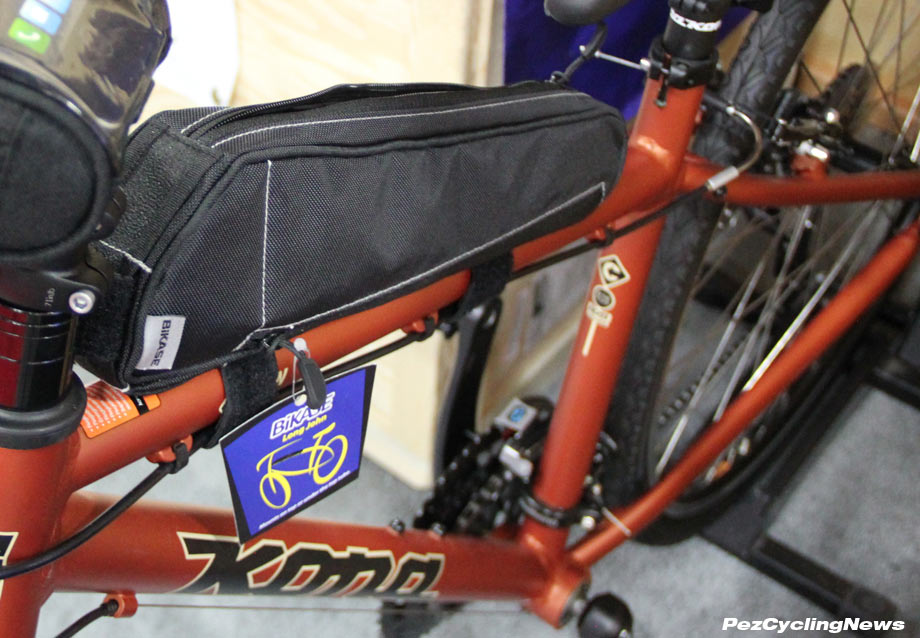 The Long John ($40) is made of durable 840 denier nylon,  mounts two ways with velcro straps – above or below the top tube. 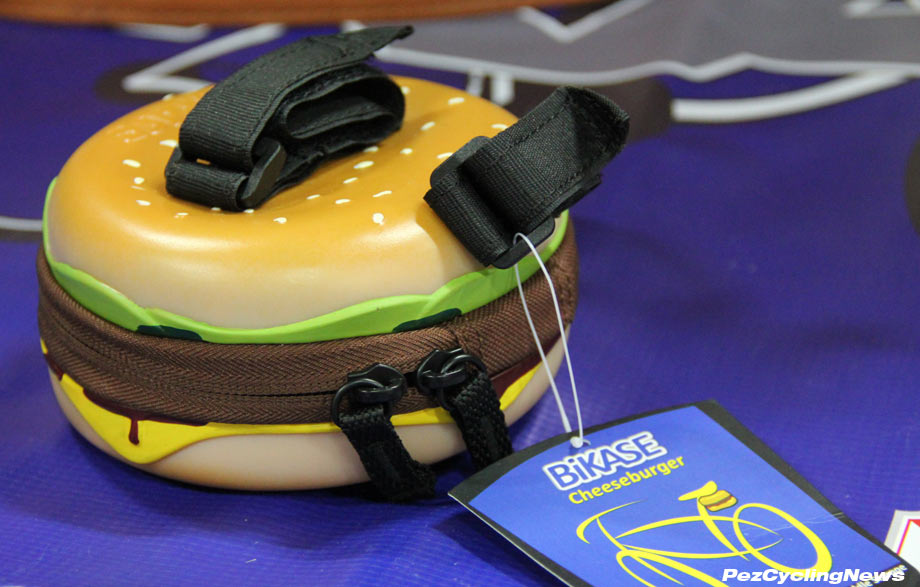 Chad’s not without a sense of humor too – anyone want fries with their cheeseburger saddle bag?