Here’s today’s offering of more of the coolest stuff we saw at Interbike. A few bits to get you rolling, to roll on, to see where you’re going, to stop and to take a deep clean breath…

Crank It Up
To get you Cranking, There were a few cool designs floating around… We saw several versions of designs extremely similar to FSA’s team version and a couple of standouts not so similar. 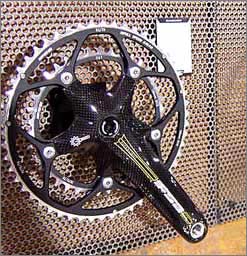 Looks new twisters had a nice looking variation to the spider area. They are fairly stout looking and more eye pleasing than most. 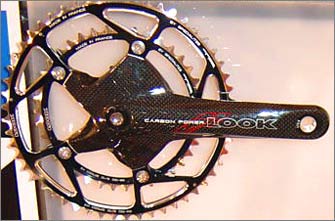 While IRD (Interloc Racing from Mary sales) had two versions, the Mosaic: 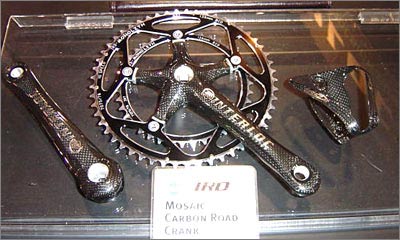 And a pretty nice version using the outboard Bearings similar to Shimano’s super new D ace set. We hope to have these on the next test bike, as the design looked sweet and more to the point, I owe the Chief at Mary Sales about 400 Beers… 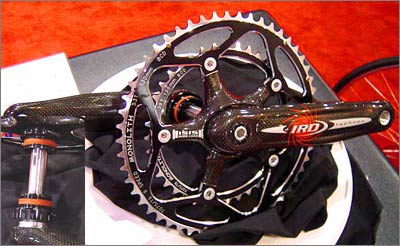 Speaking of the new D ace, these new chain rings from Tiso are a step in the right direction (also with a nod to the new D-Ace design). Stiffness and performance under shifting are the best part of the new D ace design. I wonder if Tiso got it as right as the super slick Dura Ace. 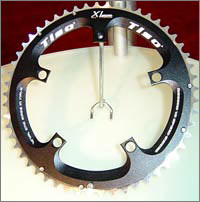 Once you get rolling, the now ultra High end Reynolds All Carbon Clincher was the hoop to have. They have kept the weight down (unlike some competition) and built them based on a super design of their Stratus wheels. A Second mention goes to the show stopping Magnesium Clinchers from American Classic. I was so busy slobbering on them that I forgot to take a picture, but you will get a full spread on what should be a metal clincher set spoked 32 / 28 and tipping in at under 1200 grams! 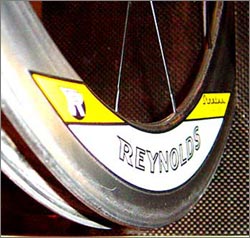 And once you’re up to speed, the folks at Adidas had some absolutely show stopping specs, with what could possibly be the best (cleanest, lightest, trickest new) design in prescription inserts. I wish I would have taken a better picture that this, but just be ready when they hit the shelves!

And since you’ll need the brakes with all that speed we have some super stoppers from TISO and C.A.T. 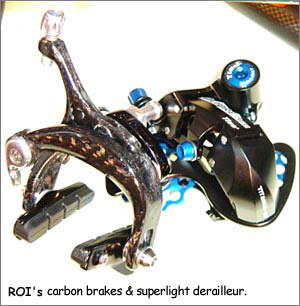 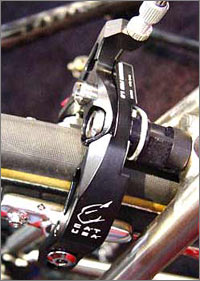 While C.A.T. have been working for quite a while getting their slick Multi Metal jobs ready for sale (Not sure if they are actually moving units).

In Case your Brakes fail, the latest in Air catchers seemed to be this prototype from CATLIKE. I lost count on the vents, but there’s a lot. I just hope they run channels through the lid to vents that let all the air back out, or this thing might slow you down more than the Brakes we have here! 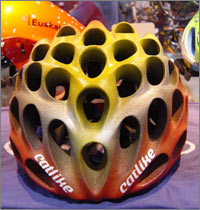 Then again, Catlike sponsor some silly fast people and make my favorite lid (the Kompact) so I bet this comes out well… 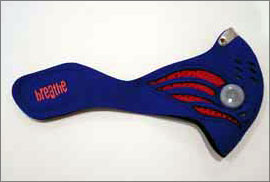 To help you breathe at speed we have the masks from er…. Breathe. (breathesmogmasks.com). They are like a certain other company’s product who shall remain nameless because their service isn’t great, they’re more expensive and heavier with less breatheability (yeah it’s a word, cause I said so…). Breathe make these as a performance sport mask for places (Like LA!) where the air makes exercise worse for you than doing nothing. They also work well for winter (until it gets so cold that most moist things freeze…), and are great for folks with allergies etc.

We don’t wanna flood you with “stuff”, so soak this up. And not to worry as most of this will be back here with tests after a few hundred miles of horrible Phoenix weather testing! (The abuse I endure in sub 80 degree temps in January just to bring you the goods is frightening!)