Vancouver’s LANDYACHTZ have a passion for building things that tend to be the starting point for companies that make good stuff. They’re bike builders as well, but the product that caught a lot of attention is their Reform Saddle. 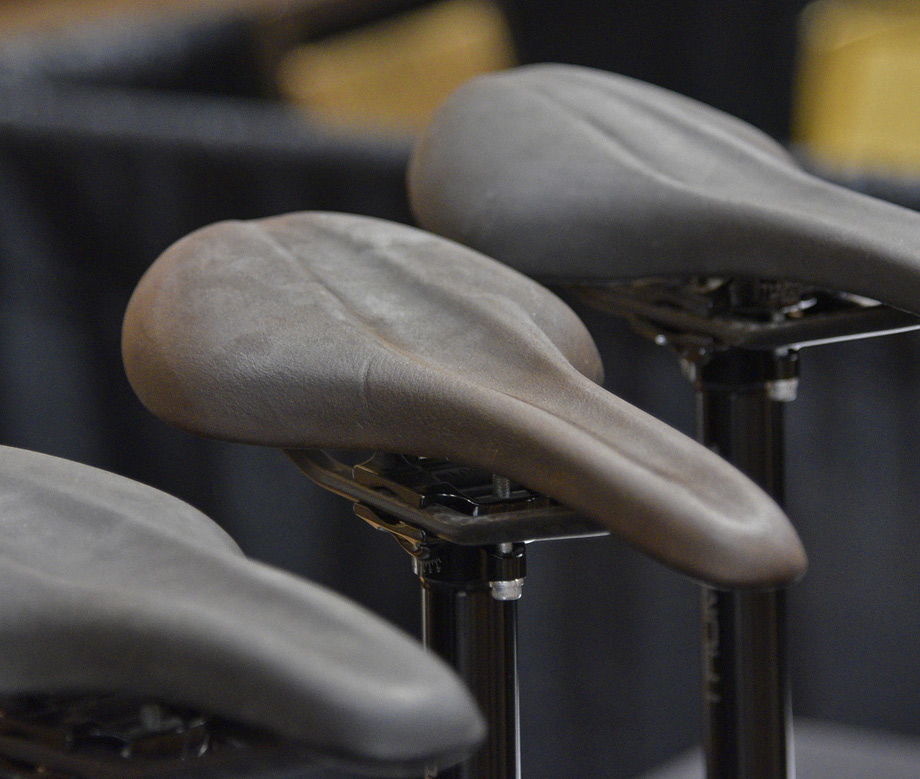 These are made in Vancouver and feature a heat molded base that can be molded, as you ride on a trainer in the shop, in about 20 minutes. 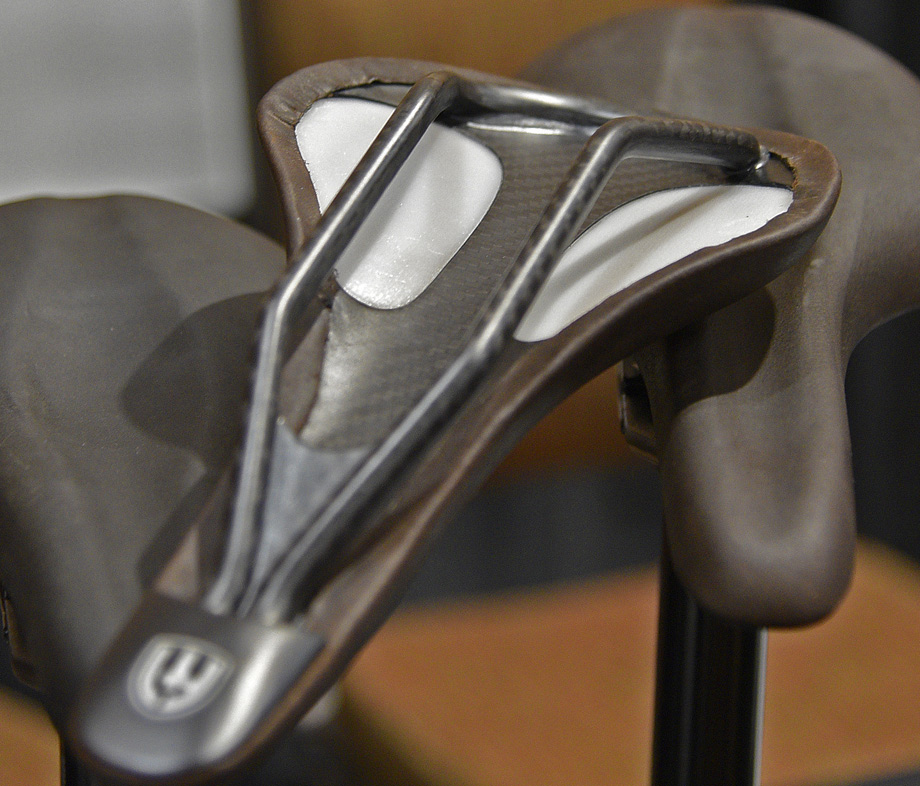 Landyachtz have linked up with Gebiomized (pressure mapping) to confirm reduction of point pressure and that the forming not only conforms to greatest pressure points but also forms slightly to your natural movement.

The saddle materials are tip-top quality including full carbon shell and rail system, the proprietary heating system and padding and a genuine leather upper that gets a beeswax finish (and the beeswax comes from the apiary right on the roof of Landyachtz HQ).

Heating elements are built into every saddle and need only be activated by the plug. If you choose to not mold the saddle, thats totally up to you.   Landyachtz recommends using of of their dealers who will have the plug in house and can heat the saddle in their facility.

SILCA had just been ambushed by the folks at Interbike who dropped their innovation award for Road on the Indi tech Guru’s Tattico Bluetooth pump. 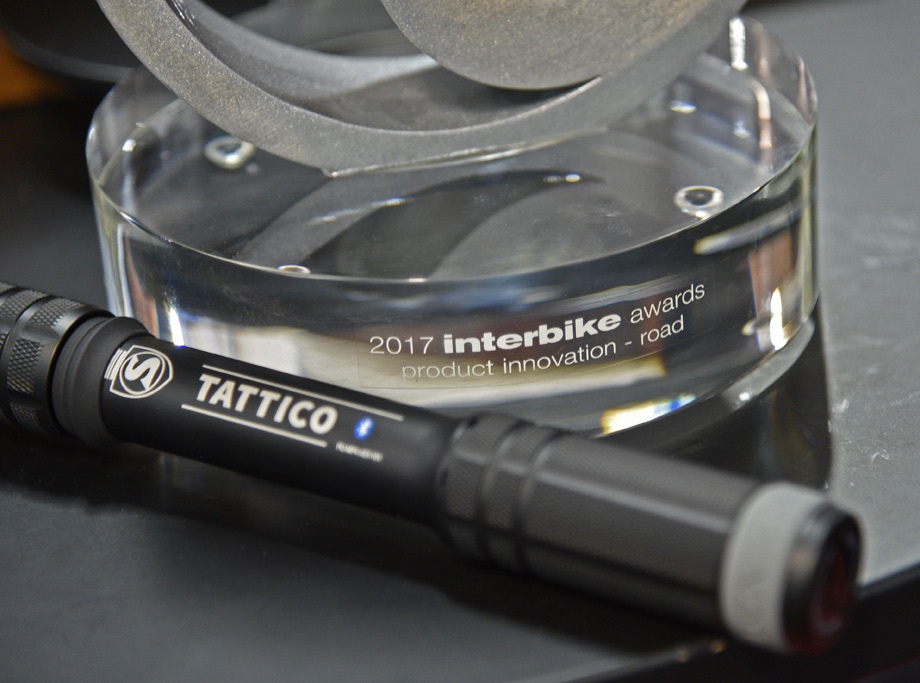 This is one of the more honorable-honors at Interbike as, unlike many others, this award isn’t applied for by manufacturers… Interbike’s tech heads get together and hunt down the honoree for this trophy.

The Tattico, like most kit from Silca is heavy on hidden tech. Of Course you have the Bluetooth connectivity that allows you to know within 2% what you’re pumping tires to by having a look at your phone screen (or an Ipad for show purpose). And yes, you can dial up the screen to best suit the thing you’re pumping (from Mountain to road to shock sensitivity) and you get a little beep when you hit your pressure mark. 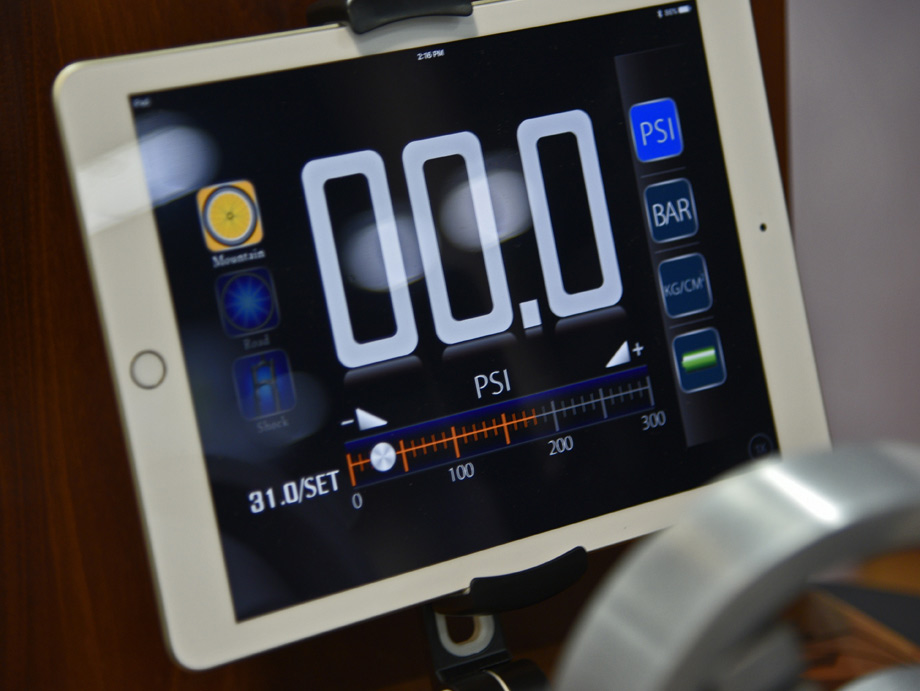 But the real geek gear here is in that the gauge itself is isolated inside the pump for long term durability. That +/- 2% is better than the vast majority of quality floor pumps on the market yet this one fits in your pocket or mounts to your frame (and that isolated gauge means shock and vibration are less likely to do harm). 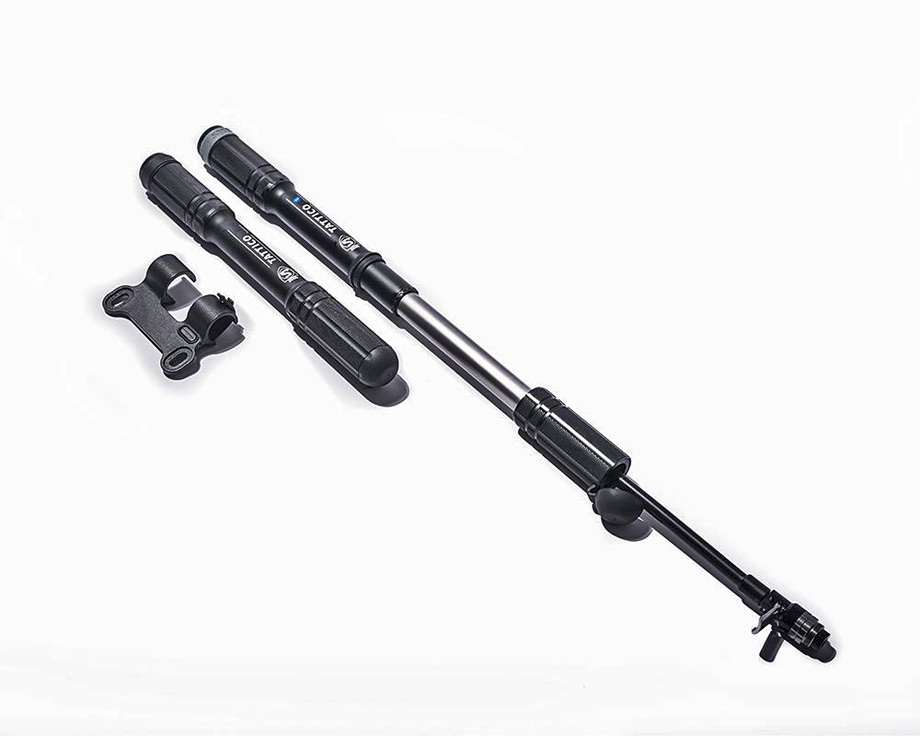 And then there’s the “reverse” connection of the hose and chuck, meaning they hide inside the smaller end of the pump rather than the larger tube, allowing for more air capacity inside and more air per stroke. Ah and there are heat sinks as part of the design and of course the materials selection also helps reduce friction and eliminate heat which is a bit of a bitch for some mini pump designs.

This boils down to no more guess work when out on rides with an air chuck and CO2 OR typical mini-pumps that either have no gauge or a POS gauge with all the accuracy of a helicopter flying without a tail fan. Especially for people out on longer rides, that accuracy can make a difference.

These are rolling now for $120 and you can see more at: Silca.CC

OAKLEY made a splash launching both cycling apparel and their ARO series cycling helmets. 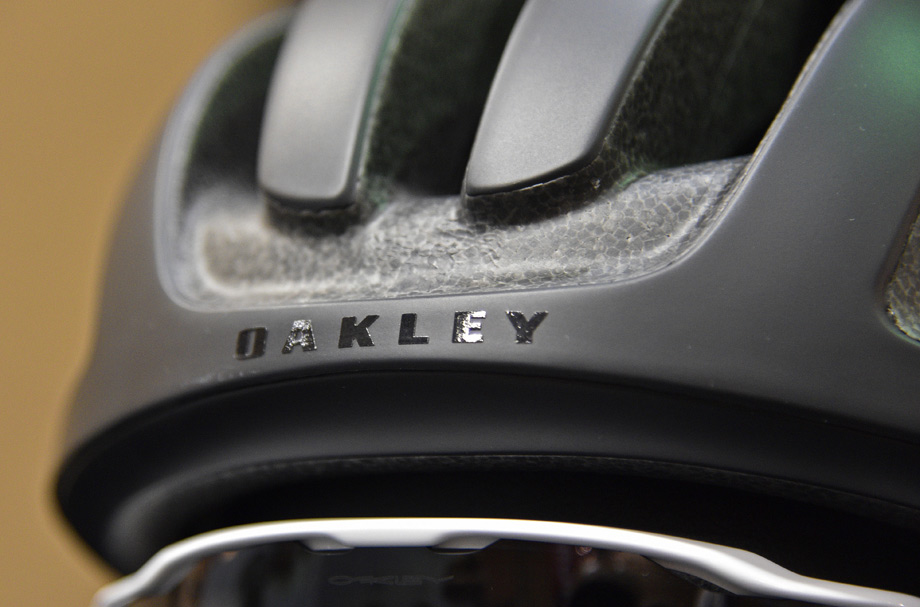 The ARO 3 is the climbing/ventilation focused hat. (SRP $180) 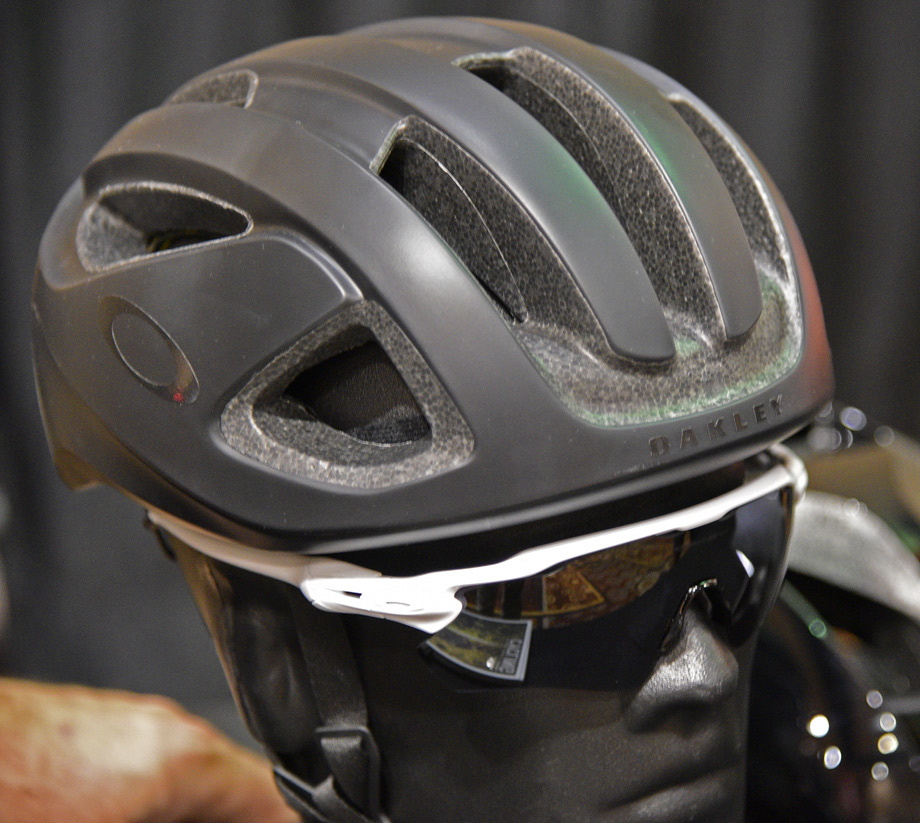 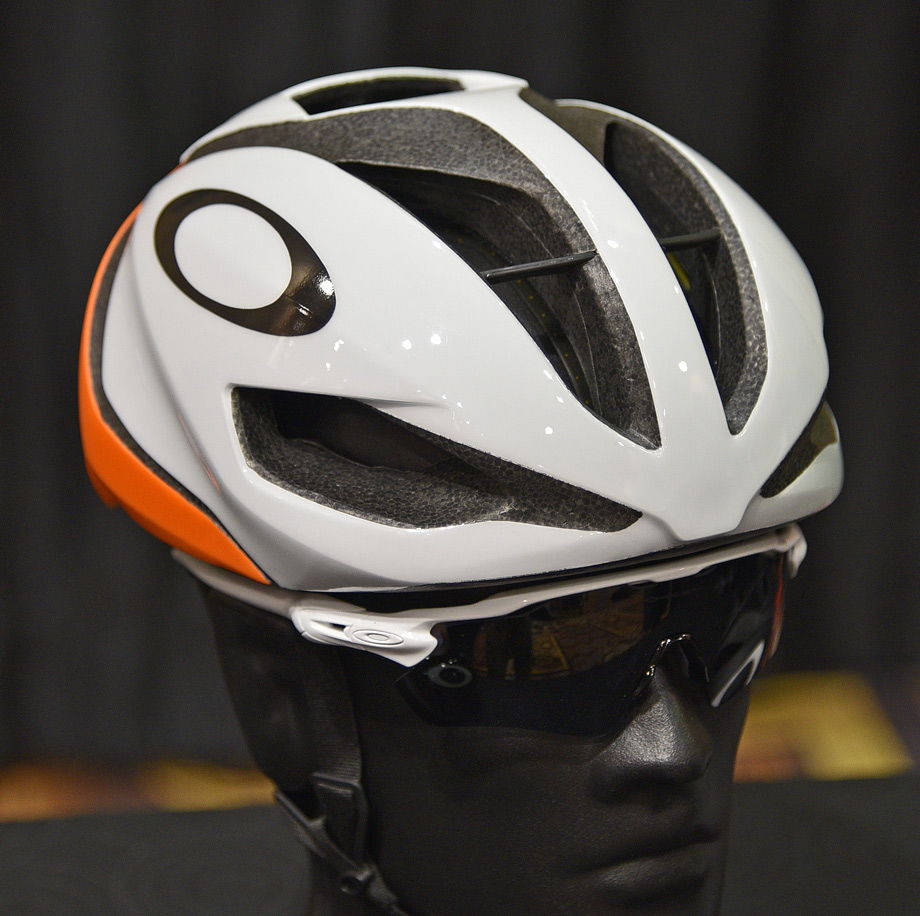 And the Aero 7 IS THE TT/Tri focused lid, with Oakley optical quality magnetic shield). (SRP $500) 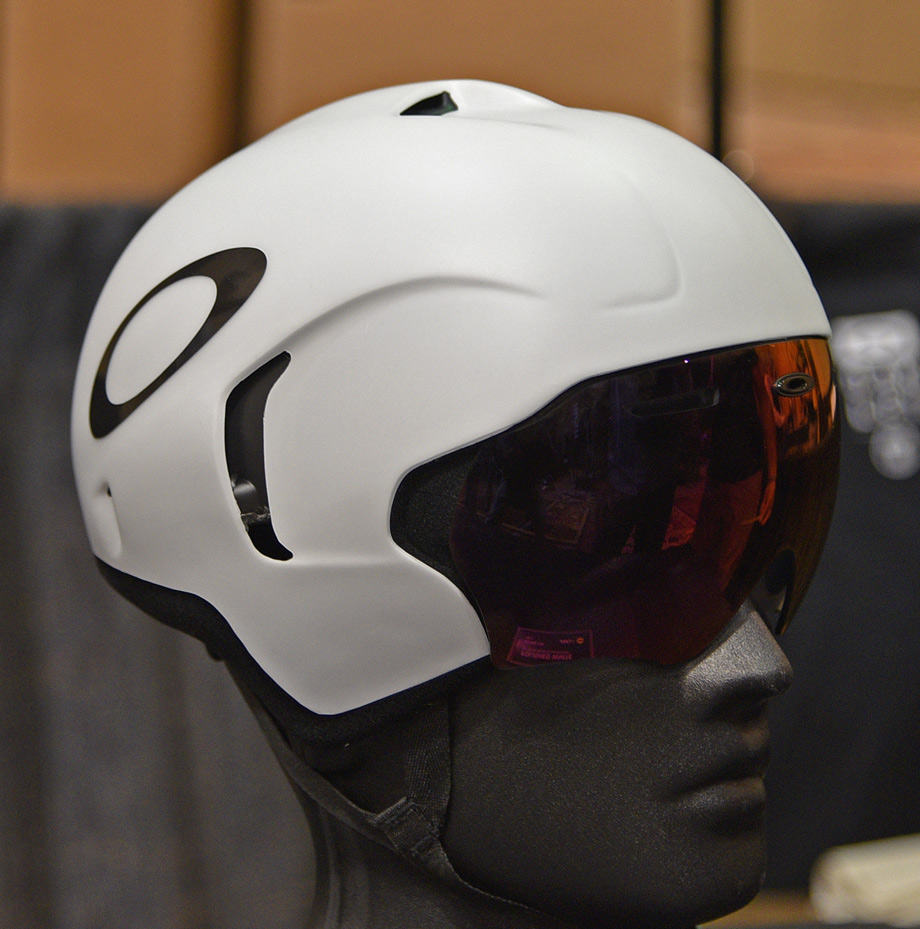 All of Oakley’s ARO series are offered with MIPS impact force mitigation system that helps allow the helmet to absorb rotational energy. 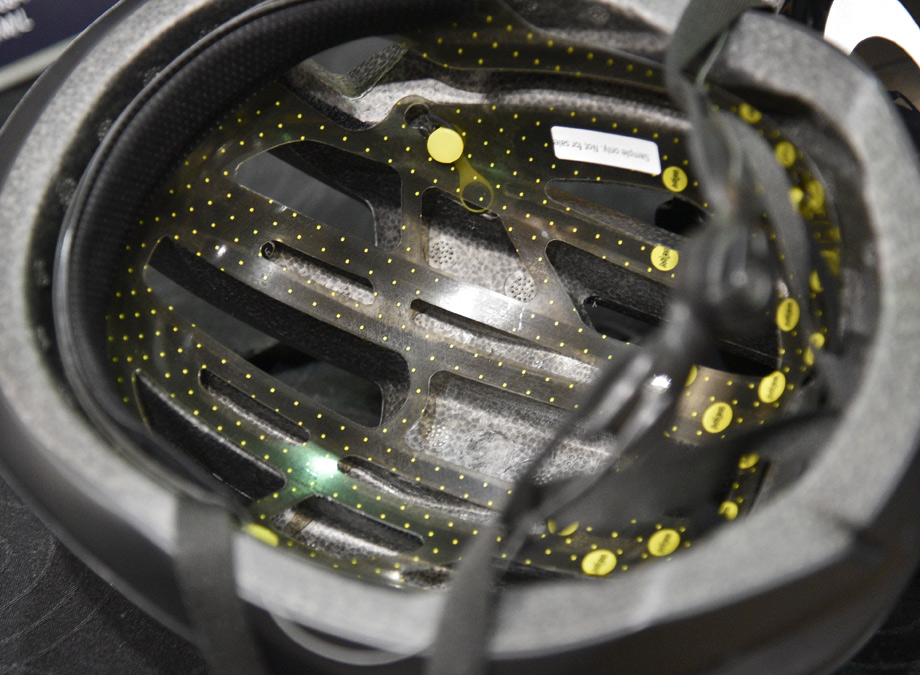 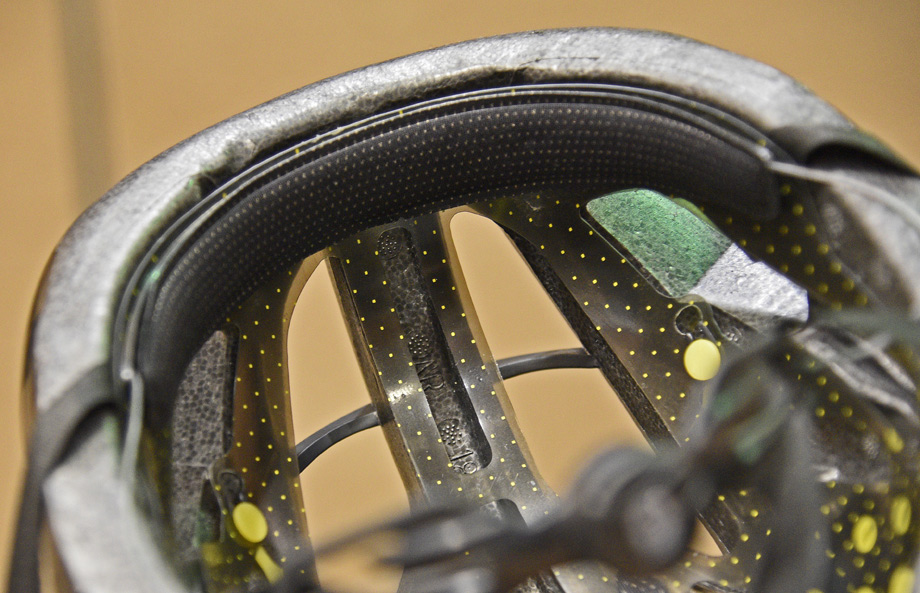 Oakley are also using a full wrap around retention system (using BOA’s ratchet and wire) that draws the brow pad and rear portion together to hold your whole bean rather than squishing the back into the front (a move pioneered by Lazer that is catching on now in several forms, to everyone’s benefit).

The helmets’ construction and finishing for all three lids is very good. You would expect this level of execution from Oakley.

The one area that I would have expected from Oakley to be a little more complete was the channeling and exhaust ventilation… The back of all 3 helmets seemed to be a bit of a dead end into a wall of foam. 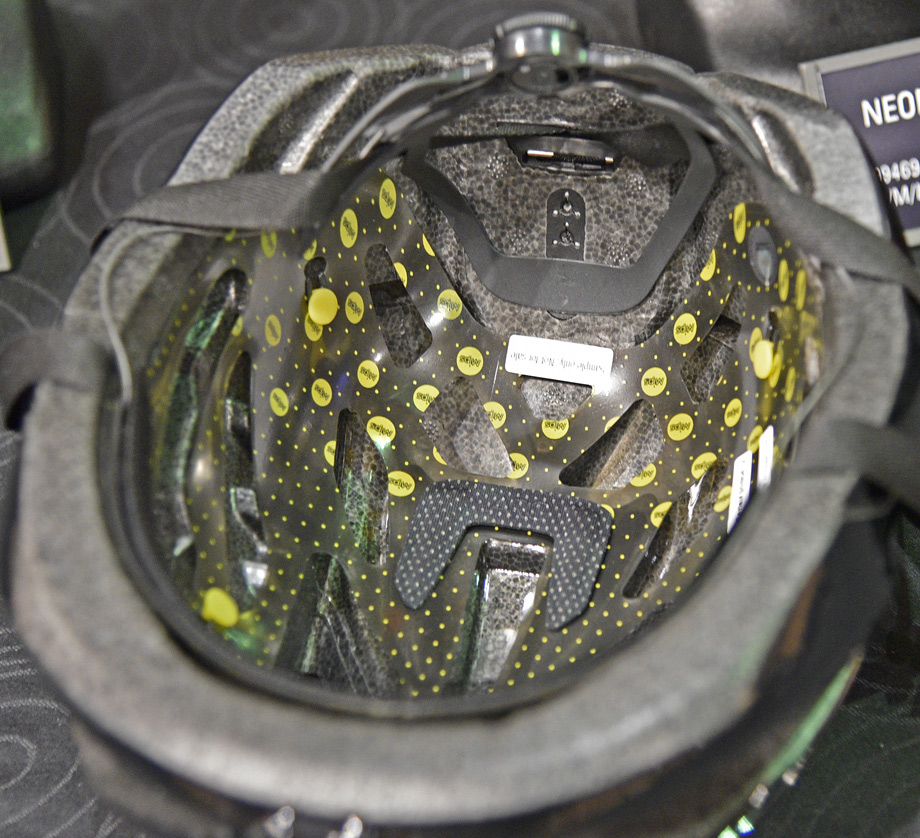 But given the budgetary muscle at Oakley, it would not surprise me to find that this retention system holds the helmet sufficiently away from the rear of your head to allow the large front vents to push air out and down. 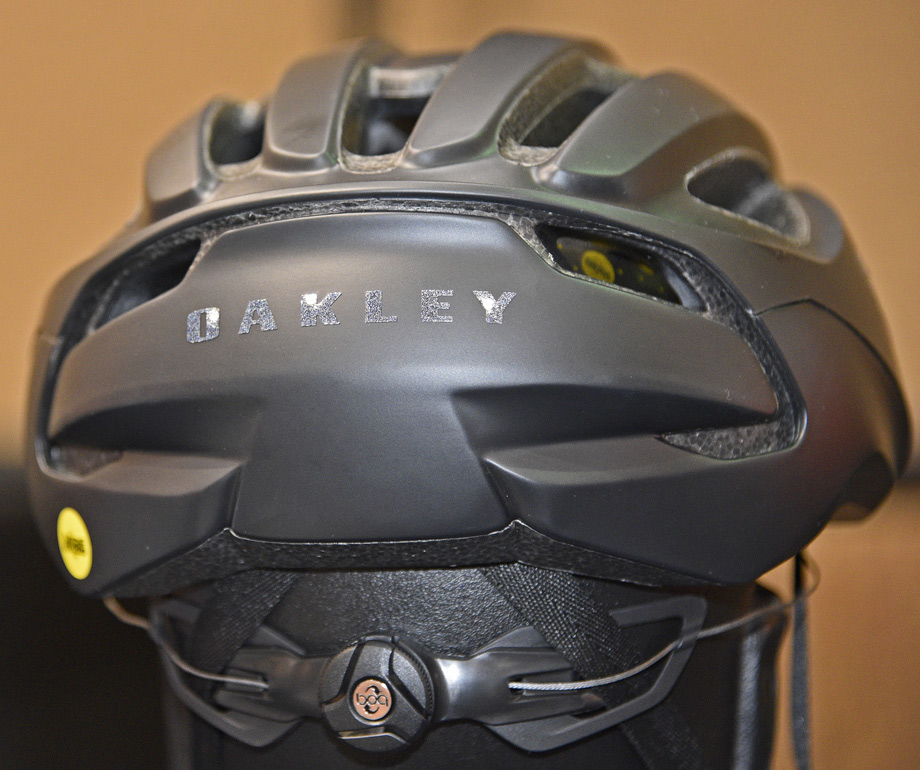 These Helmets and Oakley’s clothing should be available Feb 2018. Oakley did not have these up on their site yet but I would guess that will resolve itself shortly at: Oakley.com.

Yamaha also had a large presence at Interbike this year… 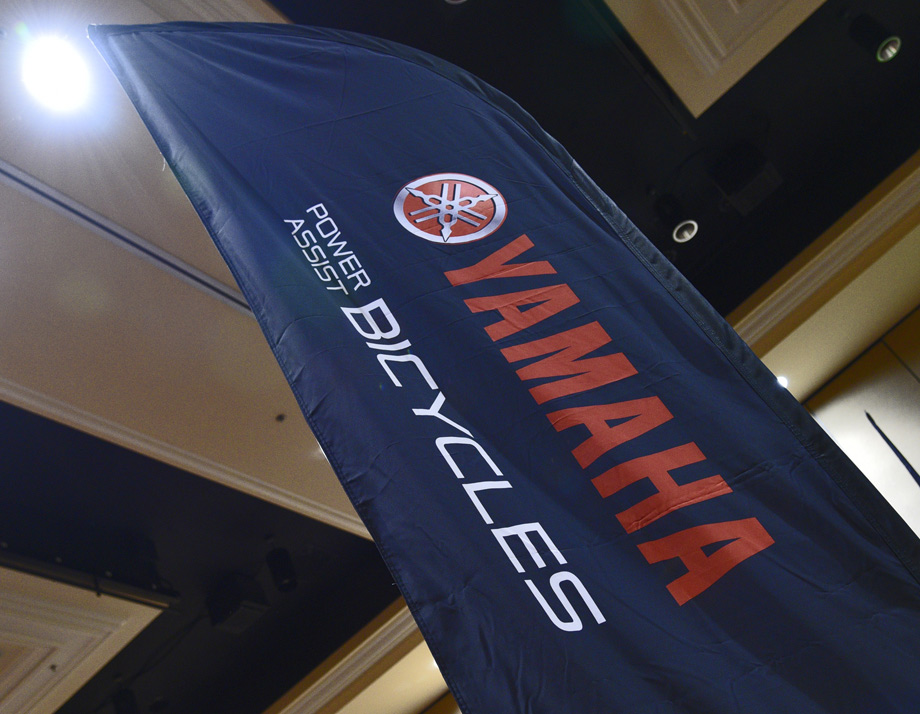 Not many folks realize it, but Yamaha have been at E-bikes for 24+ years. The company have moved 6+ million drive units or complete bikes and were one of the very first in the space.

I know there are some folks that can’t stand the thought of losing a weenie measuring contest to an E bike, but I’ll put this out there as politically sensitively as I can…

You are an ignorant (probably selfish) ass if you think E bikes are anything but a positive on the road (or in your shop). 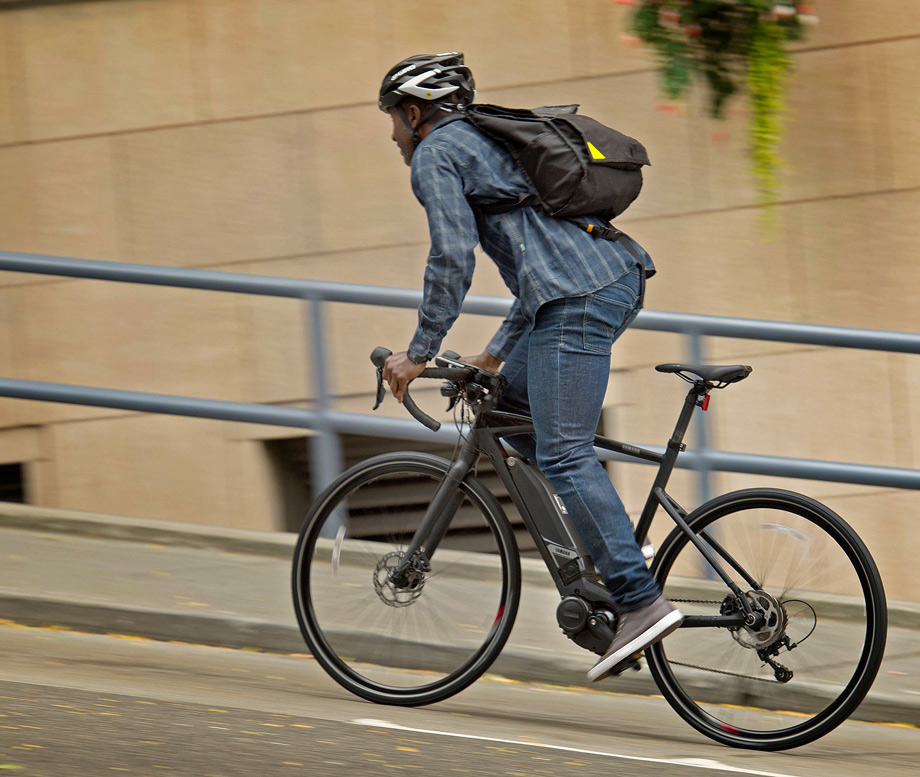 More riders on the road in all shapes and sizes, on all types of equipment, catching and passing you or being caught and passed by you, IS A GOOD THING.

Anyhoo, the bike that I would prefer from Yamaha is their Urban Rush… 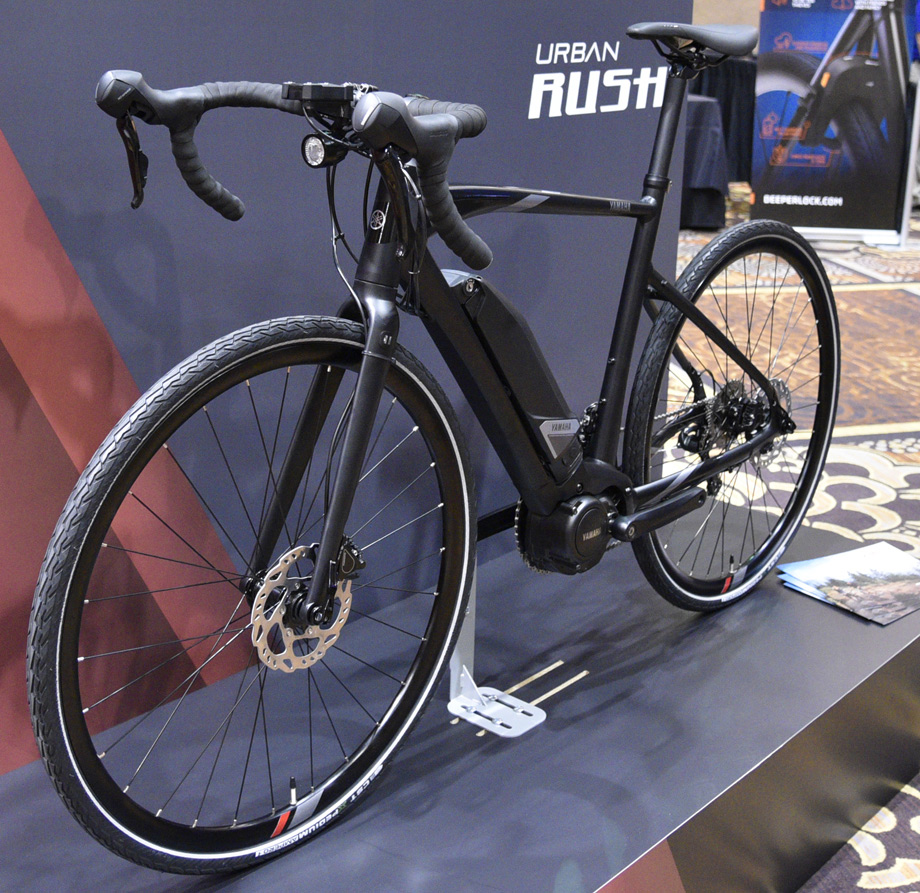 Yamaha’s tech is solid, with a power delivery system that monitors both Pedal torque from the rider, cadence and speed. The tech is great at understanding when you want to go faster and when you want to maintain speed. The Urban Rush is set up for the street and with a bit more stiffness and speed on the pavement than their other models.

The thought of my one hour commute home getting cut down to 30+ minutes would extend my commuting season well into the 100 degree+ days here in Phoenix. And I know a lady that commutes year round (and she’s 60+ years old) and simply could not do it without E assist. And… She has 3 friends that live in her senior community that also commute every day on e bikes.

That’s bikes on the road… that’s tires / wear item sales for shops. That’s why it’s the strongest segment in an industry not currently known for strong segments.

You can find more at: YamahaBicycles.com.

More later from the floor…

Gazprom – RusVelo is to compete in Giro della Toscana