While some pubs have exhausted their finds from Interbike in a blazing money shot of “see it here first”, we’re taking our time to savour the many sweet treats unveiled for the new year. Here’s a few more that might inspire some recession-busting spending…

Interbike is a damn fun time that just keeps gettin’ better. The displays, the lights, the shiny new bits – all trйs cool – but the best part is reconnecting with old friends, making some new ones, and realizing that even though most of my work life takes place in the solitude of the home office, those often lonely hours plunking out stories are all worth it when I rejoin the rest of the bike industry in fantasy land. 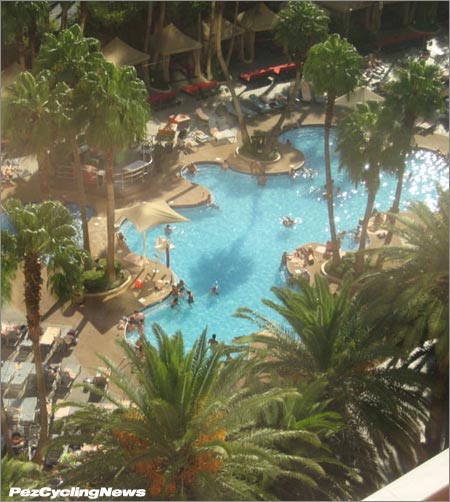 Here’s a sight that’s blurry for a reason – that’s how everything looks after a couple days on the Interbike circuit. And this is about as close to the pool as I got – at least until Saturday when Mrs. Pez joined me for couple days r&r. And I’m pretty sure none of the people in this pic were attending the show…

The on-floor reception to our humble digital offerings of the past year was heart warming at least, and gosh darn close to tear-inducing at best – I was blown away by how many folks popped out of the crowd to say hello and state their love for PEZ and our love of cycling. I’m talking about guys and gals I’d never met before – but most of whom seemed to know me… which in a way is true.

I wish I had budget to assemble the whole PEZ Crew at Interbike for a giant PEZ “love in” – because without them, there’d be not much for readers to get excited about. Sure our crew is way smaller than our competitors, which limits the volume of work we can produce, but I’ll say that each and every one of our stories is written from the heart, otherwise they just wouldn’t PEZ-worthy. So I got to bask in the accolades for a few days – but let it be known that our full Crew effort is what makes us PEZ.

And although Charles was in charge of covering the product side of what’s new for ’09, I stumbled into a few cool things myself… 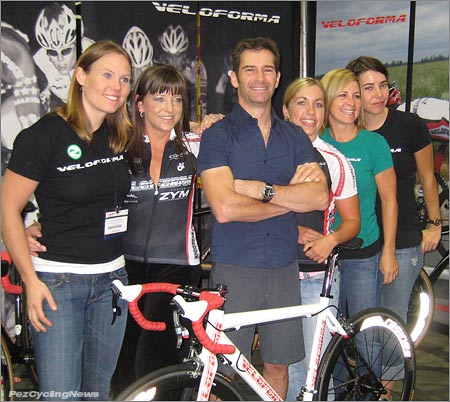 The ladies of Team Veloforma are shrewd marketers – this pic was their idea – and whattaya know – here they are on PEZ!

I joined just about every other press agent at the show for Lance’s press conference, and it got even more interesting when Greg LeMond sat down in front of me. Lance was uncharacteristically late (by 15 minutes – but hey it’s Vegas… ), and by now you’ve likely read what transpired… it’s clear there’s no love lost between the two TDF winners. Lance handled the situation with the expected professionalism, even if he couldn’t help rolling his eyes at least once, but there were people in the room who felt some empathy for Greg, who had a valid point, but presented it so poorly that people were left scratching their heads…. 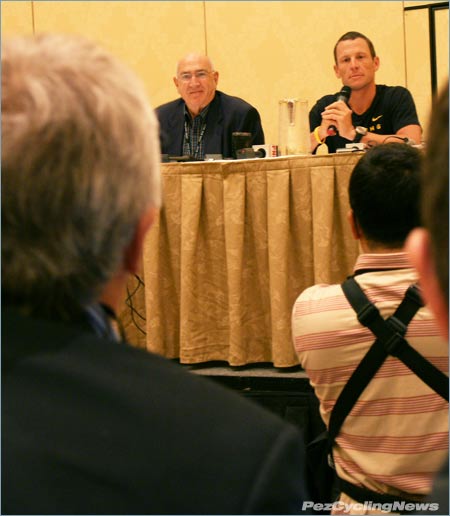 I asked Lance what happened to the rumors of a Livestrong Team, and he responded that with Astana, he’s got Johan, strong sponsor commitments (Trek), and a known team structure, which is simply much easier for him to plug into than starting his own team with new riders, sponsors and infrastructure. We’ll have to wait and see what the Livestrong branding looks like on the new jersey and how exactly he’s gonna be spreading his message beyond racing the bike. 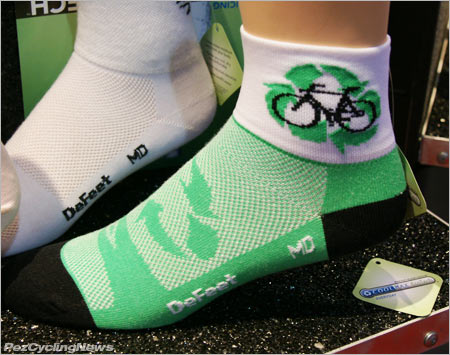 The folks from DeFeet once again showed they’re firmly planted on terra firma with their new line of eco-friendly socks make of recycled plastic – yup. The actual yarn is “Eco-Tech” by CoolMax, and really is made from some of the 100 million daily trashed plastic bottles in the US. Shane Cooper told me that 90% of DeFeet’s 2009 sock production will be made from the material, which feels as soft (Mrs. Pez says even softer) than non-eco Coolmax yarn. 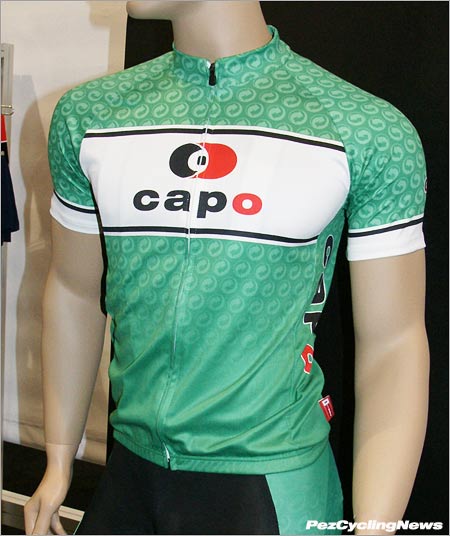 The guys at Capo have also stepped into the green ring with their in line Verde kit, which is made mostly using polyester fabric from Italy that’s created from recycled plastics. And pricing is in line too at $159 for the bibs, and $119 for the jersey. There’s also a sock that’s made from wood fibers … 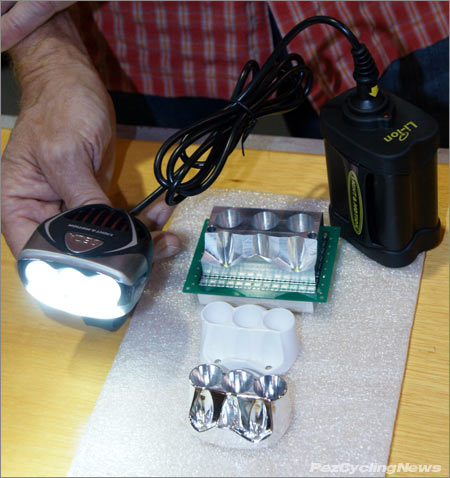 Maybe the brightest bicycle light I’ve ever seen was on display over at Light & Motion (see www.bikelights.com). These guys earned their stripes designing and building lighting rigs for underwater film crews – and nothing eats light like the deep blue sea. Here’s their topline Seca 700 Ultra – which delivers a whopping 700 lumins of light (trust me – that’s a LOT) from a 9 cell Li-ion battery through their custom reflector that directs the light ahead of you instead of wasting it out the sides. It’s got the requisite variety of output settings and mounting options and is what you need for serious night riding – whether on- road, or off.

The theme at Blackburn was “tiny is huge”. Apparently the Carbon Nano Tech from sister company Easton has transferred over to general design of items at the sizes of pumps and lights.

Meet the “Flea”… Micro sized lights are nothing new, but this is the brightest one I’ve seen. It’s got four of those tiny lights that flash, blink, or just light up and they are BRIGHT.

Don’t be alarmed – the Flea is much smaller in real life.

I really liked the Velcro strap for fastening to a bunch of different handlebar widths – no longer do I have to worry about busting off the too small rubber bands like on other turtle lights. But the coolest part is that it’s rechargeable. You read right – and the charger is about the size of 5 stacked quarters, and runs off a normal AAA battery… very cool.

The Flea also comes in the must have red tail light that simply clips onto the back of your collar, jersey pocket, pack strap, or helmet. It’s also got four super bright lights that will improve your visibility to vehicles a whole bunch – whether it’s full on night time, or just a cloudy day – AND it’s rechargeable.

I also liked the all new all aluminum AirStik SL – it’s small enough to hide easily in a jersey pocket, or clips out of the way with a frame mount under a water bottle cage. I’ve been looking for a tiny pump to augment my C02 inflation system that I ride with, but as yet have not found a tiny pump up to the job of reasonable inflation. Then bam – I tested the AirStik back at PEZ HQ and soon had 60psi into a tire – which for me was plenty to ride on. I could have pumped in more if I really wanted. And it comes in white (as well as black) – so it’ll be easy to find inside your pack or musette bag. 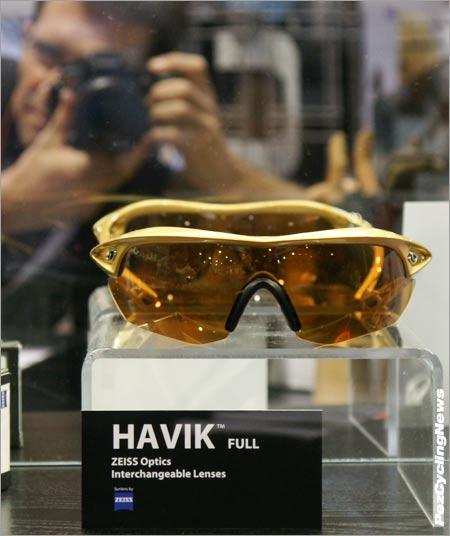 GIRO has expanded its optics line with a new lens for the Havic frames worn by GT-meister Alberto Contador. The new Havik Full lens is still made by Zeiss, and delivers seriously incredible optics. A riding buddy of mine tried them on last week and immediately stated his vision was clearer and sharper looking through the Zeiss lens – a common reaction that I’ll confirm. The frames allow for un-fettered peripheral vision, and the new FULL lens offers more frontal coverage, which will be great on cold winter days, and features two tiny vents above the nose piece for better airflow. The nose piece is not adjustable (yet), and some guys (like me) will find the frames touch their foreheads which leads to sweat problems on warm days, but Giro assured me they’re working on it. 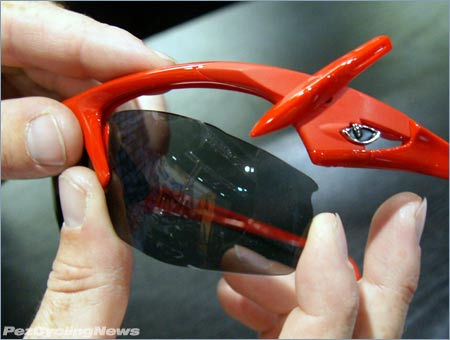 Giro’s “Filter” glasses feature a snappy lens removal system that eliminates the need to grasp the lens between your fingers, reducing the chance for scratches and smudges. A simple twist of the frame corner allows the lens to just drop out of the frame and into waiting fingers. They also feature the Zeiss lenses, soft rubber nose pad and grippy ear pieces to hold ‘em in place all day without pinching most normal sized heads.

It’s been 4-5 years now since Scott Bicycles stepped into the big ring of road bikes, and a couple more since their launch of the sub-800gram Addict road frame. This year the showed off the evolution of the Addict road series with a brand new superlight Cross version… 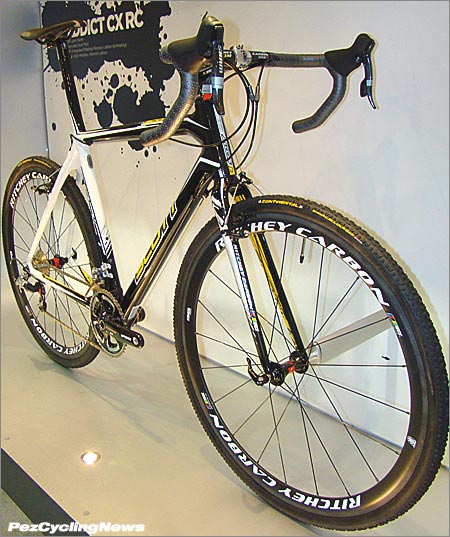 But the really cool bike was their Plasma TT rig – first seen at the Giro this year, and recently setting the 1st and 3rd fastest bike legs at the ’08 Kona Ironman. 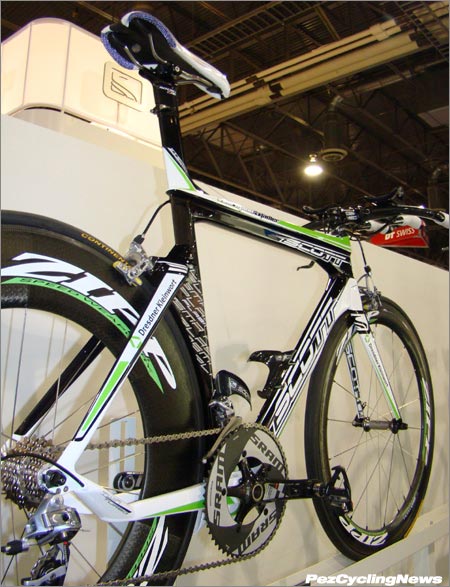 The rig features a headtube integrated with the frame for max-aero, all internal cables, very narrow tube profiles and more… 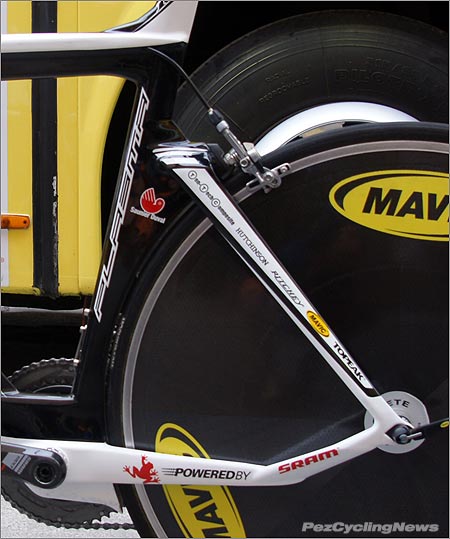 The chain stays hug the wheel almost full distance back to the hub, creating maximum room for feet, and minimum disturbance of air flow. 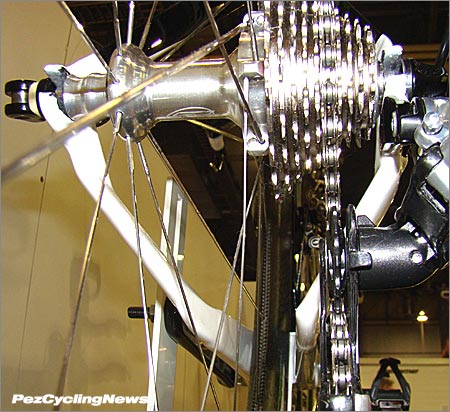 The seatpost is uber-aero too, and even the seat stays are shaped to smooth airflow. 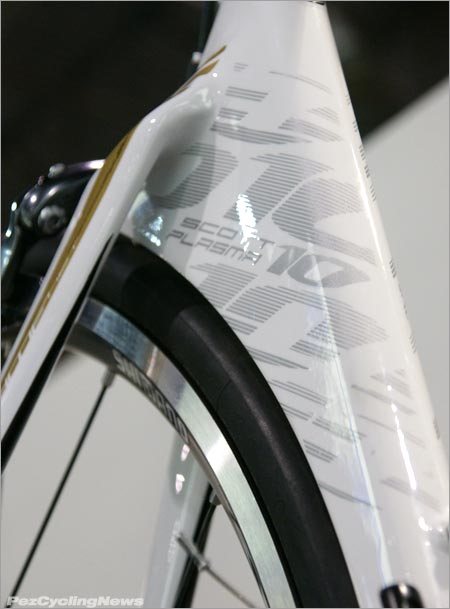 The last two years have been great for SRAM as their gruppo has earned its place as a solid performer, and the lightest gruppo available with RED, so for 2009 they added function and reduced weight to the ‘entry level’ RIVAL gruppo with zero-loss shifting (front shift only), multiple cable routing options, and reach
adjust for both the shift and brake levers. (now on all SRAM levers). The whole group will retail at just over $900, and is 214 grams lighter than Shimano Ultegra SL. 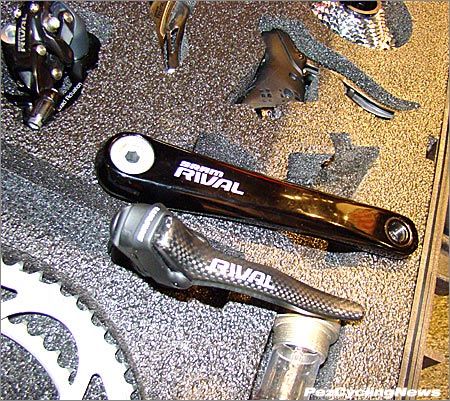 The new hollow-forged aluminum Rival crankset is lighter and stiffer than before, comes in both 110 and 130 bolt patterns, and weighs 40 grams less than last year. 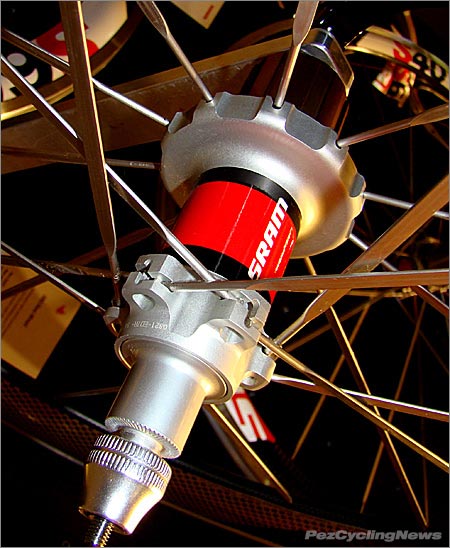 The “Torpedo” is a conversion hub for singlespeed or fixed gear riding that lets people go from freewheel to fixie in a jiffy. 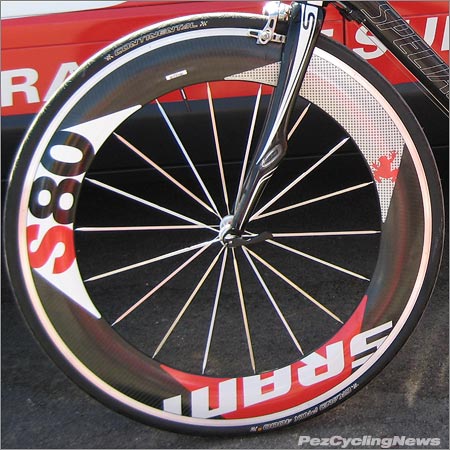 I had a brief ride on the S80’s at Demo day, and aside from almost getting sucked into the death vortex of a passing freight truck, found them pretty fast riding and even faster sounding – TT men and triathletes will love these for both function and value ($1400 msrp).

And white was more popular this year than ever… It was only a couple years back when anything white on the bike was pretty rare, and since white technically is the sum of all colors – things were looking mighty colorful across the floor for 2009. 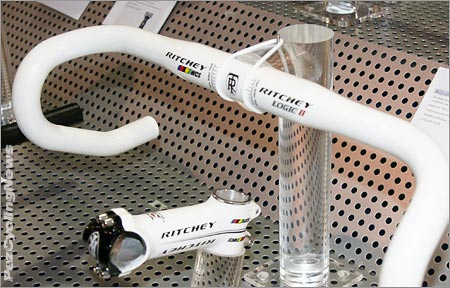 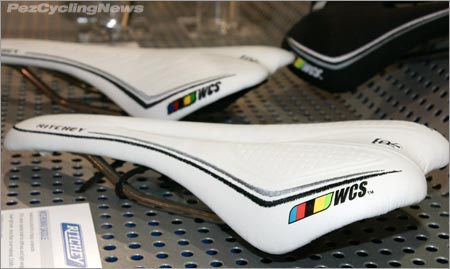 Over at the Veltec Sports booth, the Italian saddle makers Prologo were showing white, but really stepped it up with some psychedelic 70’s swirls that reminded me of the funky seat cover fad from the late ‘80’s.

But adding function to that form, a number of the Prologo models featured built in clips for attaching small saddle bags (or reflectors) – this is so Euro and we’re still catching up (at least in my neck of the woods), but it’s sure easier than fumbling with straps and velcro to attach a seat bag.