Almost time to head to Las Vegas for the annual three day Tech-Orgy / buy and spy fest that is Interbike. Here’s a little preview of the 2005 products that we (and everyone else) will be posting over the next few weeks. It will also let dealers note a few booth numbers to visit.

Any Tech guy with a passion for gear looks forward to Interbike like a prostitute looks for a, er, never mind, we geeks just look forward to it. This year is no different, and we can’t wait to get cranked up (insert collective groan at pathetic segue…)

Speaking of cranks, 2004’S Kings of Crank, FSA will have a pretty nice Dura Ace inspired set of Carbon spinners at the show (among their bars, stems, wheels etc…). The whole house is worth a tour though, so stop in and see em… 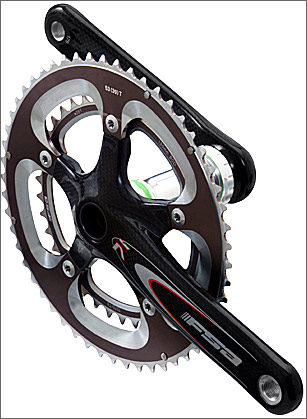 Also on the block with new cranks are the folks at Zipp. Their new set is a very clean version that will work with standard ISIS BB’s. This new set hardly tips the scales at all, but more importantly, Zipp have not sacrificed stiffness for light weight! They go for function before form and have simply done it right as far as performance goes. No Stickers yet on the Proto’s, but I’m hoping for nice charcoal grey stealth signature (like the z series wheels)… Regardless of Logo, they will put dimples on my face. 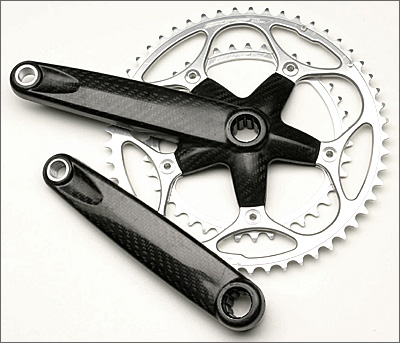 Speaking of dimples (man am I a great writer or what…), Take a first peak at Zipp’s new 404 set! Trickle down tech from the 808 set used by Tyler and Bobby to some great success (Read the PEZ-Review here), the new 404’s feature an improved shape and now use dimple tech to toss even more of an advantage to a wheel set that was already the best in it’s class (depth) for aerodynamics. The Wizards of Wind don’t seem to sit idle in the R and D department, as the ink barely dries on one wheel upgrade before the next comes through… 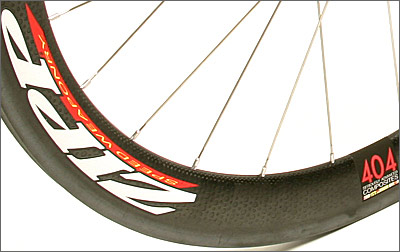 Another application of the bumpy-surface-for-wind-cheating theory comes from clothing guys believe it or not. Giordana (through Gita) come to the party with a jersey that looks more like it was cut from an evening gown than laid out in a lab (it’s way cool in person too). The bumps are in the right place though to rough up the surface and help eliminate the wind vortex that forms behind your shoulders in an area rife with drag. They also have a new Chamois this year that is WAAAAY comfy. 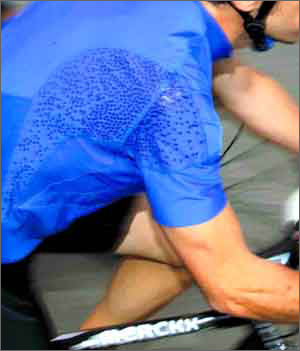 Saddle makers are trying to give your butt some relief as well. Selle Italia come to the party with something that has me really happy. While most of the weight Knuckleheads will like Selle Italia’s new SLR Teknologika,

I can’t wait to get my butt on the new Prolink light that was made with comfort in mind first but goes on a diet this year!

Firmly in the booty holder mix (and growing every day) are the folks at Fizik, who re do the Arione as the Arione Carbon. It’s not just a cosmetic rehash, but some solid (while flexy) tech. And it won’t hurt their show traffic that they may indeed have Maggy the Cobble King Backstedt, the next Coppi (calling him the next Pantani just doesn’t sit right) Damiano Cunego and Long time product tester Gibi Simoni. Confirm ahead of time to be sure they will be there, but go buy for the saddles for starters.

Lazer have come to the pate with a new TT helmet that is actually on the market! Their Chrono 2 is already showing up on heads in North America and has the CSPC certification. 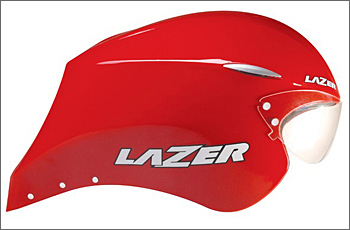 Lazer also bring you this little doohickey, but you’ll have to go see em to find out where to stuff it! And no it’s not a knock off of Oakley’s TT shades that only David Millar could manage to wear. 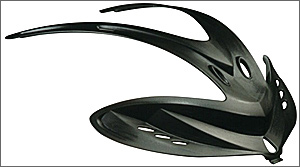 Sure to get your blood flowing will be Eddie Merckx 25th Anniversary Carbon cobble killer. Dressed in over 100 layers of Carbon and Kevlar blackness, this is an intimidating looker… 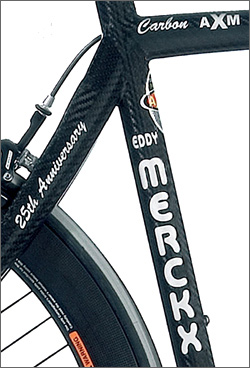 On the beauty front too, something strange is happening with lots of high end carbon this year. They are starting to come with paint again!!! Screw the weight, it’s nice to see Art again, and it gets no better that Colnago’s new President. Leonardo brought us bikes, so who better to salute him then Ernesto… And what a way to do it. It might look like a paint job, but it is actually a super slick graphics application with a clear coat over top, and it’s simply jaw dropping. 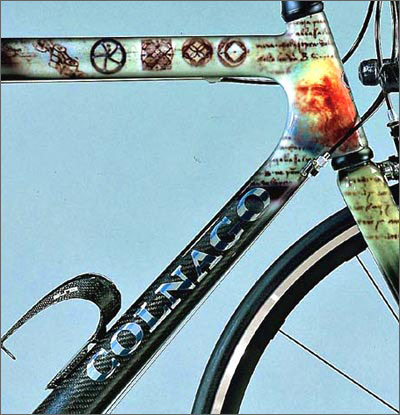 Also back in the painting business are the outside the box guys at Kuota. They bring you a full Carbon frame, with a splash of color and a ton of Value in their Kharma. They also roll out a great TT bike and very nice Aluminum / Carbo… 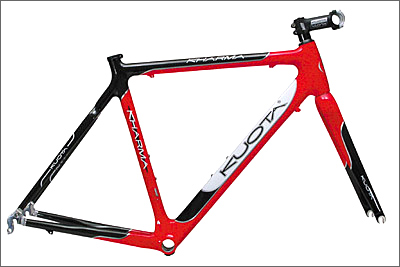 Cyfac have been putting custom frames under some of the biggest names in the sport, and have a tremendous history with riders like Hinault, Longo, Guimard, Chiappucci et al… And Cyfac don’t mind laying on a coat or two of color, but what lies beneath is very special in the picture below. It is a custom fit full Carbon TT frame and they stand alone in that arena (for now). 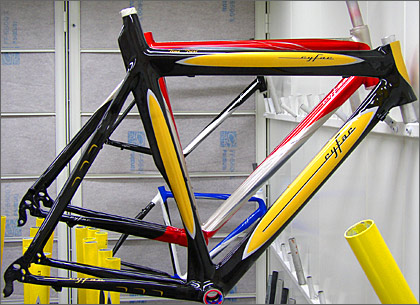 And as if the bikes didn’t stand out already, BMC brings you their top dog in stars and stripes. The BMC SLT01 was already tough to come by, and their new Patriot “Swissle” will probably be in short supply too! 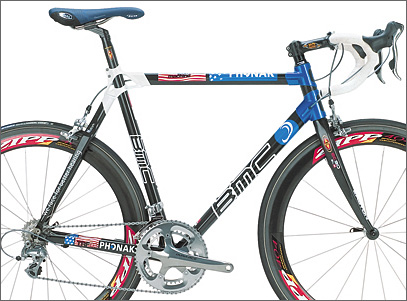 Another barn storming new brand will be Ridley! They have a slew of bikes and will be plenty visible in the Pro ranks this year. They have been a very strong brand in Europe for quite a while, featuring sweet frames, but also a whole slew of components. Give em a look at the Sinclair Booth. 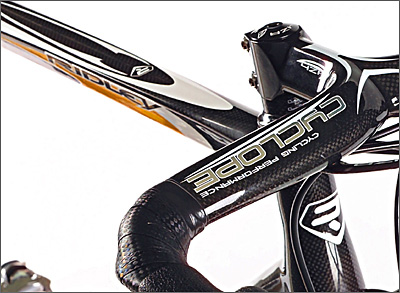 On the lighter side come Easton with their Carbon Nano Tech. Carbon Nanotubes are used to strengthen the standard Carbon structure to allow Easton to lighten up their forks and use carbon more safely all the way down the dropouts! Go Check em out at the Veltec sports booth for More details

Also on the Light weight side are the wheels from, er Lightweight! Carbon Sports will be in Vegas with wheels that will be used by the likes of Ullrich, Wesemann, Nardello, Hondo and others at the worlds… And you have seen them under a ton of big names all year… 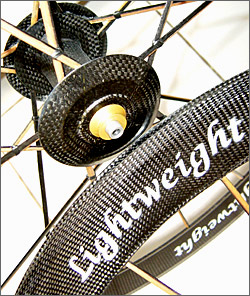 Calfee also have a thing or two to say about Carbon, and they have the best solution to a one piece carbon bar and stem combo around, simply because they can alter stem length, rise and even the type of bar used. Calfee eliminate the fit problem associated with almost all one piece combo’s and do it with mega style! They also make a mean Bike… 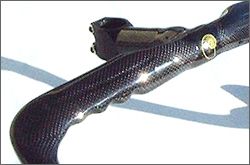 If you’re gonna look cool, you gotta be cool. Adidas eyewear roll in again with another light weight set of spec’s in their new Gazelle ClimaCool Pro. Those little vents are not just eye-candy, they are engineered (notice the shaped holes and the slots on the frame) to maximize airflow around the brow, but not put an irritating blast into your peepers. 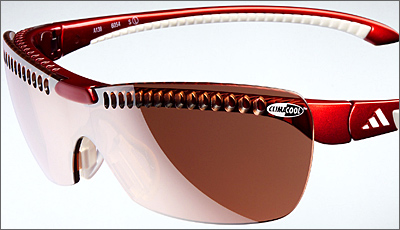 And of course if you’re gonna use all this go fast stuff, you might as well know how fast eh? So this year Ciclo get wise and introduce Bluetooth technology to Cyclo computing. That’s digital transmission that not only is cleaner and more accurate, but is also coded to eliminate false signals and increase signal strength. The new unit has a bazillion functions including a fat burning zone (notice the little flame…). And lets you go wireless better than anything else so far. 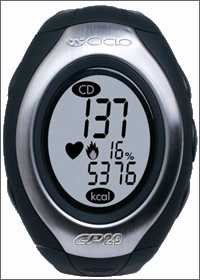 And with all the speed you need to brake right? Several top line brake upgrades will be on display this year, and the Guys at Euro-spek will have a set of Carbon stoppers that should sit will with both the stealth crowd and the weight weenies… 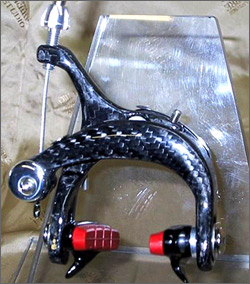 If you don’t get to go to interbike, stay tuned as we will have more photo’s roll through, along with rider interviews and other pictures of us sucking up to both our Hero’s and several manufacturers in order to bring you more cool stuff!

Tour of Courage: The PEZ Report