BMC Bikes: The Swiss Are Attacking!

First they took over the watch world, now they are going after Cycling! Swiss Manufacturer BMC took a last minute charge at Interbike, taking advantage of a cancellation from another vendor to show off the insanely cool BMC Team rigs. We bring you a pre test quick peak at the bike Tyler Hamilton and late signing Oscar Sevilla will be on (and hopefully in Tyler’s case stay upright on…). 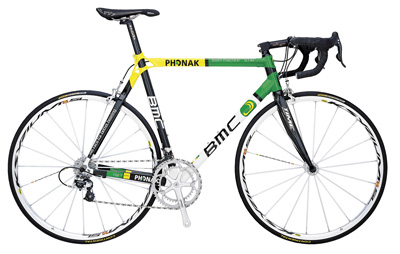 BMC Make about a zillion bikes a year. In Europe they are extremely popular and have a following on the Road and off (and everywhere in between). Since I don’t give a crap about anything but the road, and I’m a high end snob, there’s no point in showing you anything but the coolest full race rig from BMC. 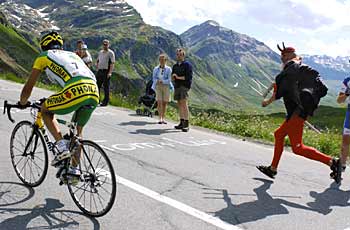 The BMC’s are so cool that the Devil is seen here trying to make a deal with a Phonak Rider. Hmmm let’s see… Everlasting Damnation or give up an SLT Team rig? I’ll take the bike… 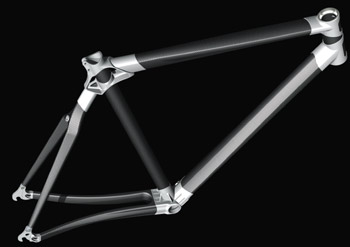 The Bike itself looks sweet with team paint, but there really is a lot going on under the skin.

The detail in The Bottom Bracket and seat binder area is impressive. Note the Double binder bolts for more secure hold while spreading the stress over a larger area. 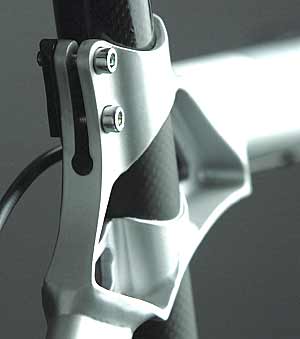 Also note the ribs and reinforcement in the bb, as well as the sweet outboard bearings on the new Dura Ace BB and crank set up. 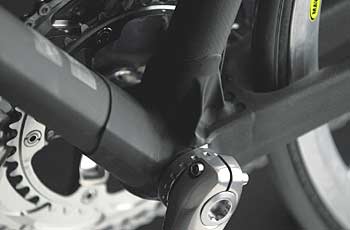 It’s no wonder the team are all smiles. You would be too if you were riding these VunderBikes around for a living. 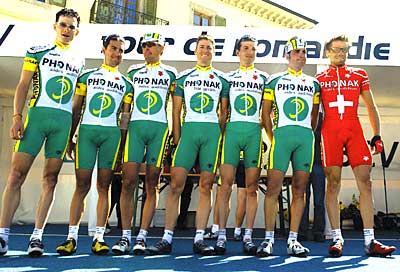 But then again, since you are paid, you pretty much have to ride where ever and when ever you are told. Most of the time that’s fine, but I bet the guy who set this picture up wasn’t Swiss. They are great engineers and Plan well for most options, and there is almost nothing but bad that can come of this! 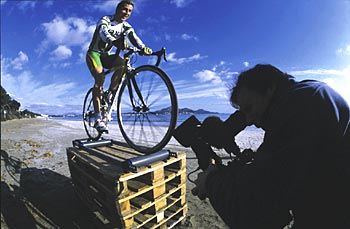 Hopefully Frank and the BMC men will find the proper distributor in a hurry (they are well on their way, so please don’t bug em unless you are already an exclusive major distributor of large cycling brands!). The sooner the bikes hit the US shore, the better. Then again, there is no reason they need to wait for a distributor in order to get one to us for Testing!!! If they ride as good as they look, It will be another fun winter to roll around Phoenix!

Inside Lombardia: A Day With Dunc!