Digging through the vast PEZ photo files is never a quick task – like pulling on a thread that leads you all over a Thursday afternoon… Our Interbike 07 files are bulging with stuff worthy of a look and comment… so here’s more cool stuff you should see, as deemed so by PEZ.

Running a casual poll through the floor at Interbike you’ll get a pretty even split on the question of love it or hate it. And like shameless geezered mop-top Paul McCartney once said to Jacko in that goofy video (which Charles confirmed was “Say Say Say)… I too “am a lover”. I’m sure many will agree, it’s no easy task convincing Mrs. Pez (or your own personal version thereof) that I’m going there to ‘work’. I count myself darn lucky to love my job, but it’s not like I haven’t paid my dues working for boneheaded bosses in various previous careers. So I deserve to enjoy what I do. 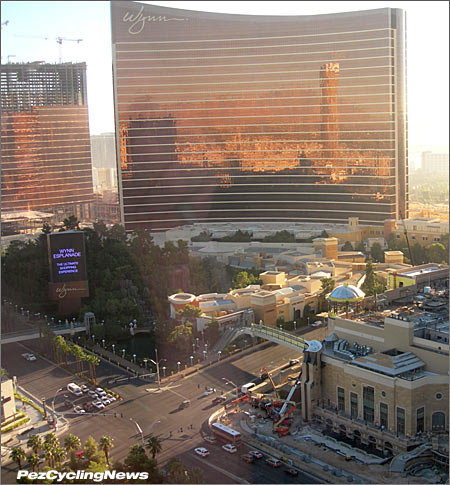 It’s 7AM in Vegas: You ask yourself – am I getting up… or am I going to bed…? As long as I hit the pillow before the sun peaks over the horizon, I’ll be fine.

For me Interbike is more fun every year, as we get to know more people and make more friends in the cycling industry. It’s the one time a year everyone gets together in North America in the same place. The new gear is bright and shiny, the buzz on the floor is palpable, and the adrenalin lasts pretty much from the 7AM wake up call to the wee hours of the morning lights out – or me anyway.

I’ve finally got some time to sort through my own shots from the floor, and found a few things Charles hasn’t already covered. 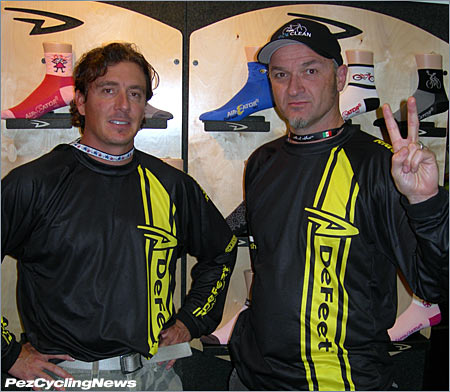 DeFeet’s Paul Willerton (marketing) and Shane Cooper (grand poobah) strike a suitable pose at the end of Thursday. As usual, there was no talk of actual business in the booth, which this year became center stage for DeFeet’s ‘Rock For Socks’ – sort of a “Bike Industry’s Got Talent” style show where contestants showed off their musical chops in return for socks, and a grand prize of a Fender acoustic guitar. Any wonder why we choose DeFeet as official sock supplier to PEZ?

BLUE IS The New Red
Call it spontaneous genius, or maybe a bunch of product managers just agreeing that this year all bikes will be blue… but as my fave color (after PEZ ‘Azure” blue- of course) – I was tickled pink to see so many cool new blue bikes.

Still one of my top pics is BMC’s SLC01, I reviewed it a year ago and was very impressed (and they don’t even buy ad space from us – haha!). It’s light, stiff, those oh so distinct lines…

– And for 2008 they ditched the ‘color me the same as everyone else’ red in favor of a really sharp blue. (Okay – maybe they’re still colored the same as a lot of others, but at least it’s a striking shade of blue.) The frame remains unchanged for ’08, but then why mess with a good thing?

Also popular this year was the use of full-width name badges that become part of the graphic package. 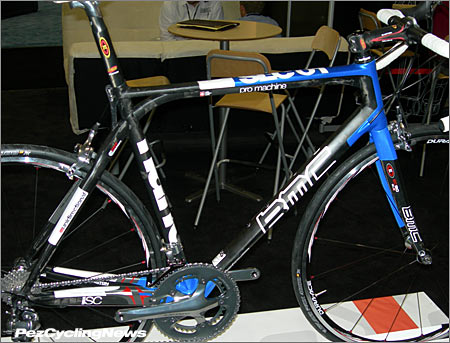 The guys at Blue Competition Cycles (RideBlue.com) are no dummies, and chose the name when they started the company 4 years ago because of the competitive emotions it evokes (and there was no shortage of red or black around either). Sure, they offer bikes in other colors, but the flagship high-mod carbon Rc7 flies the company paint scheme – could it be any other way? 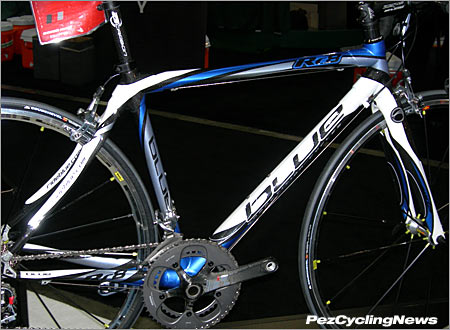 The lugged frame sets run US$2000, and with value-pricing like that, it’s easy to see why they’ve continued to grow each year.

The Sinclair Imports booth was chalk-a-bloc full of shiny new Ridley’s – which gained another notch of reputation under Cadel Evan’s Grand Tour sized butt this year. 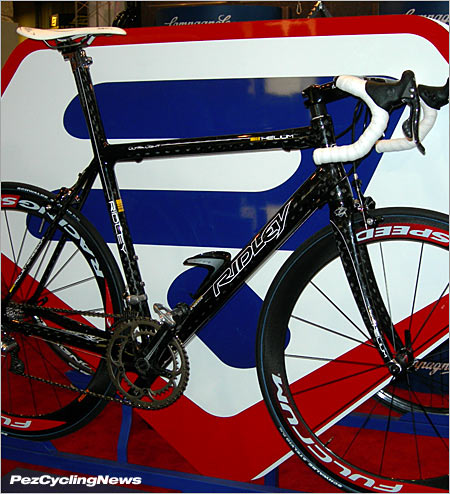 Fully redesigned for ’08 is the top-line Helium, with lighter 900gram frame (size medium), and now also the stiffest bike in the line. The frame/fork is priced at $2999.00US and should be buy-able in December.

The Ridley Noah offers another treatment in blue/ white black that is just darn nice to look at. 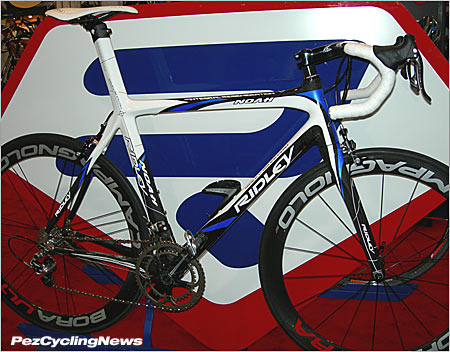 Cadel rode this frame in the 2006 Tour, and it remains a solid choice for racing – from climbing to sprinting. The frame weighs in at 1100 grams and features one of the more striking seat masts I saw. It even comes with a retro-fit cap s you can sell it to someone with a longer inseam. 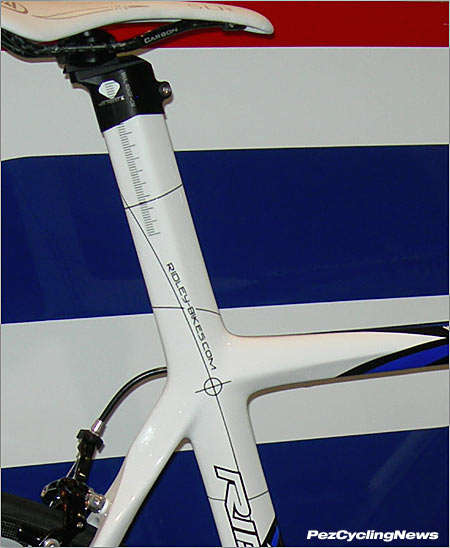 Finally – the Ridley X-Fire was a standout for more than just it’s fast looks. Priced at US $2500 retail for the full bike – it’s a big value… One that Sinclair can’t keep in stock. 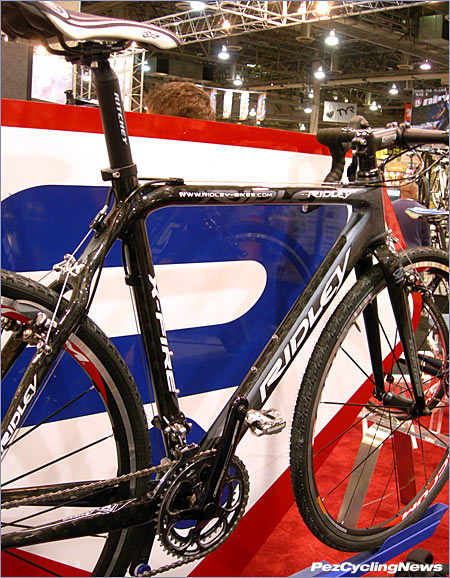 The X-Fire’s 24Ton High modulous carbon frame with 12k multi directional finish weighs in at 1.2 kg frame, and is priced to sell at US$1499 retail.

Former pro Max Lelli showed his brand new line of Italian designed race bikes – including top model the “Cinghialino’ – translates to ‘little wild boar’ – and was Max’s nickname as a pro. Typical of Italian designs, it’s beautiful to look at, and made a gorgeous platform for FSA wheels, bars, cranks, and seatpost. 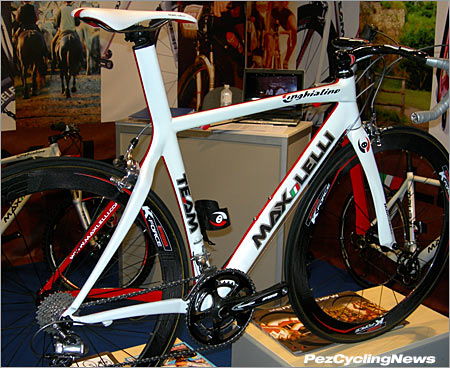 And speaking of FSA… 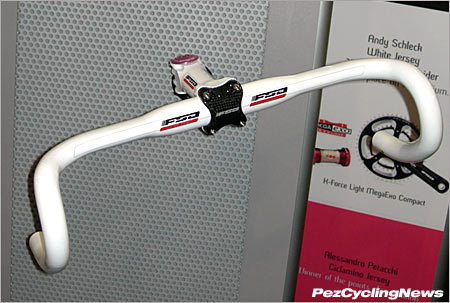 White is the New Black
I know, you’ve heard these clichйd catch phrases a few too many times, but at least the forward thinking guys and ProTour team sponsor FSA realized that maybe not all of us want black, black, and more black accessories. They showed OS115 alu stem, Wing Pro Alu bar (traditional bend) and SLK carbon seatpost all painted white – and looking very cool, not to mention clean and fast. I’ve already got my order in and promise to show you more in the near future. 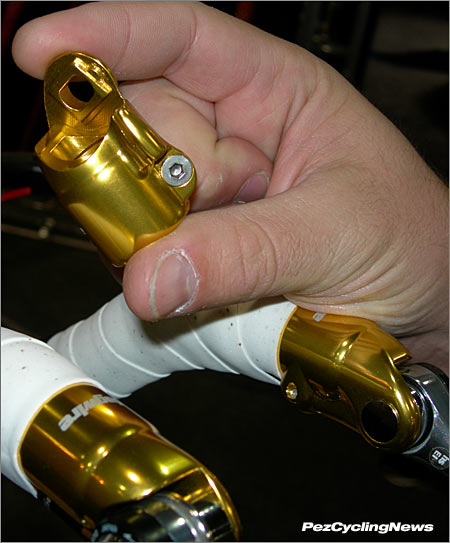 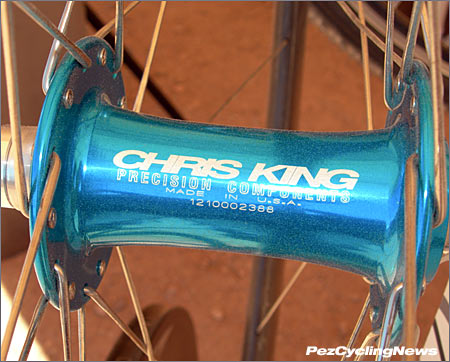 Not everything cool was to be found on the showroom floor, like the stuff I saw at Chris King’s Outdoor Demo display. They call it the ‘cross hub’ cuz they love ‘cross… but the high flanges make it well suited to anyone wanting stiffer overall wheel. They’re available in 9 cool colors (plus the turquoise found here on – like everything else they do… Comes complete with their standard 19.5 mm axle, sealed bearings, and priced at $149 front, $330 rear. 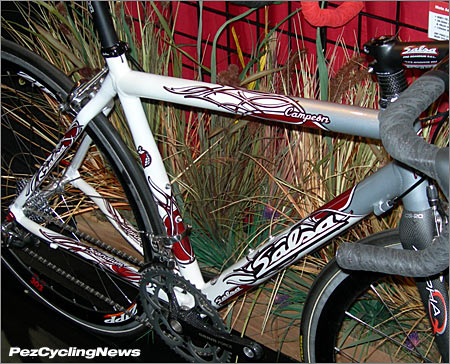 There’s something you gotta love about the guys who spend as much time on the graphics as they do on the frame design… like the guys at Salsa Cycles who showed their top line racer – the scandium front/ carbon seat-stayed Campeon. While tube-filling graphics were de rigeur at other booths, the artwork on display here had ‘low-rider cool’ written all over it. Build up the frame any way you like – the frame, fork, headset runs an amazingly low US$925. Damn….

Finally – with so much to drool on and so little time, I thought a least / most combo might be the best way to sign off…

The guys at Scott USA don’t disappoint with the new Addict LTD – one of the least weighty frame sets anywhere at 790 grams, and one of the most expensive at over $12,000 suggested retail…. Ugh. 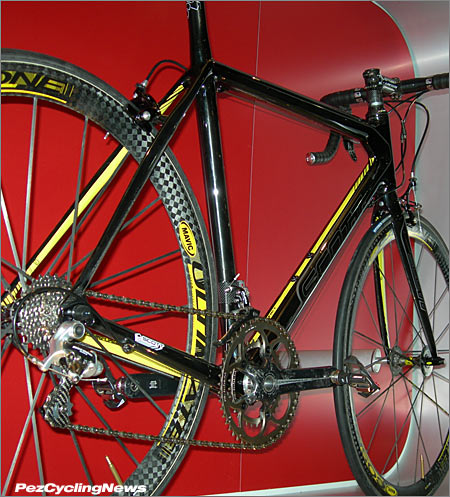 The new Addicts are available in … black, but standing out was Gilbetto Simoni’s Giro d’Italia bike custom painted in white with pink accented spider webs… Very cool, but the only way you’re gonna get one is form Gilberto himself – too bad as the white does such a good job of showing ff the Addict’s clean lines. 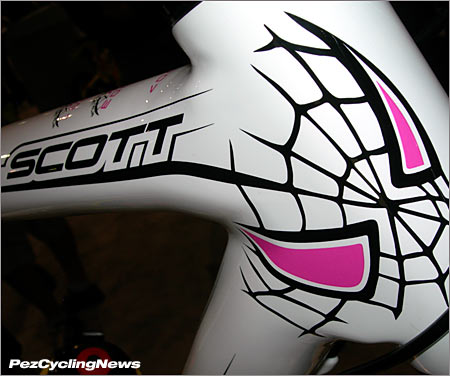 And tucked up neatly under a custom white and pink Fizik Arione saddle was Ritchey’s new one bolt seat post for the Scott integrated seat mast. There no question this is one of the cleanest looking 1-bolt designs I’ve seen. 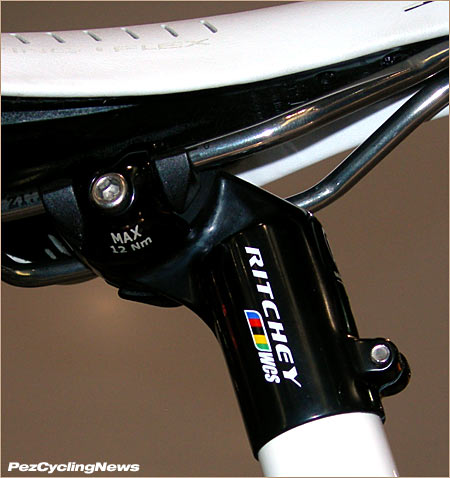 This could be the last of the cool stuff we saw at Interbike, but then again, you never know what might pop up in the cavernous PEZ Photo-archives…