The cycling industry congregating in Las Vegas is like a school of fish congregating in, well… Las Vegas. But put aside the rancid air, the silly commute to the demo area and the disgusting food and drink prices and you get the joy of seeing good friends and great new gear…

Something else that happens each year is the finishing of “silly season” where manufacturers and teams get together to form up their deals for the next year or two.

This year was no different and word is just now out (or will be shortly) that Kuota Bicycles will have added the Healthnet Cycling Team
to their sponsorship ranks. That makes for a nice addition to Kuota’s already successful year with Agritubel, generating a Yellow Jersey in their very first go at the top level and Healthnet will also ride the Kueen K… 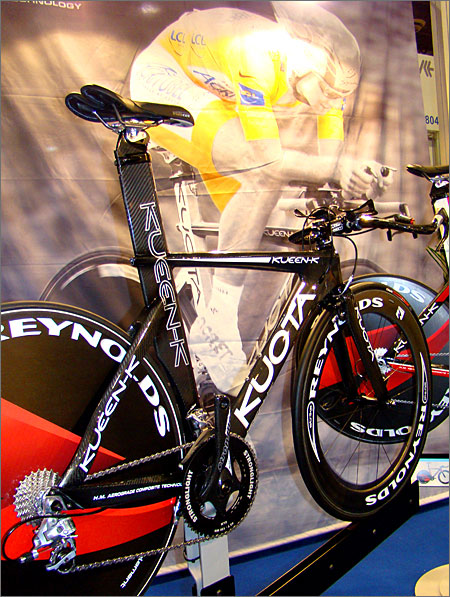 There will be a mix on the road of two Pez favorite reviews, the improved Kredo Ultra and Kuota KOM. 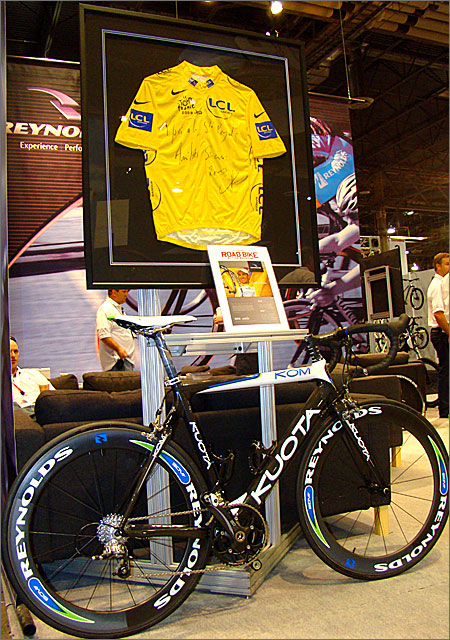 Of course Kuota are constantly improving the line and this year is no different. They decided to update the bike that I feel has been one of Kuota’s best, despite the low cost and made a back to front change of the Kharma. 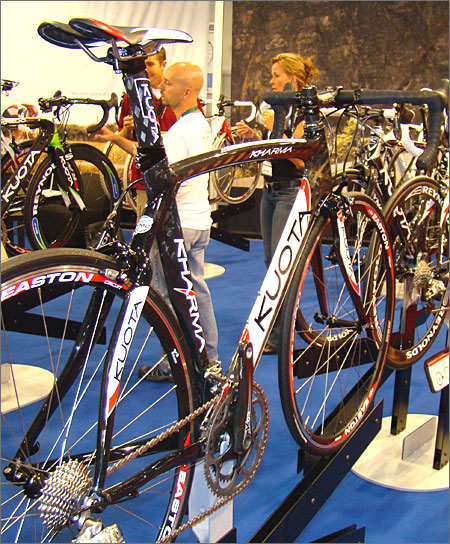 The bow in the top tube is from the Kredo’s house, but the side view shows that nothing went untouched, from the rear stays to the seat post and the head and down tubes. They also upgraded the fork. 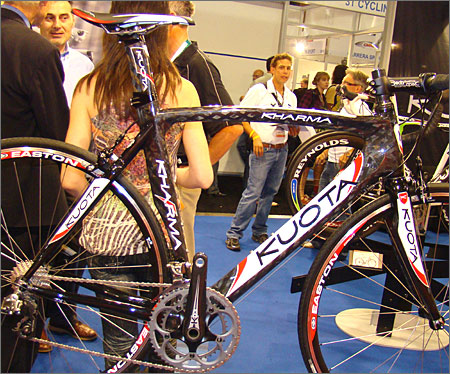 And as new “Gear” goes, the most talk among gruppo gawkers was that single new gear added at Campagnolo
… 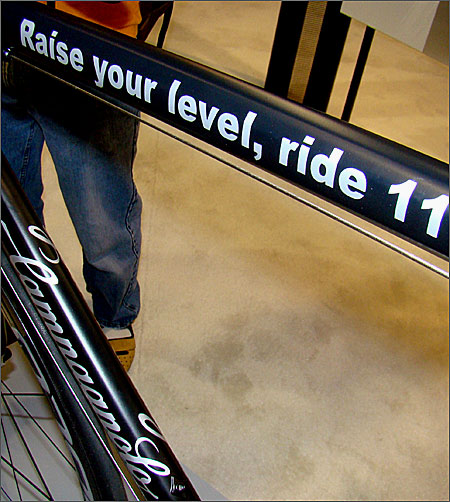 “11” is now the count, but with the other 10 gears sitting in, the extra cog is less noticeable than the updated tooth profile (note the shark fin in the middle) that should smooth transition. 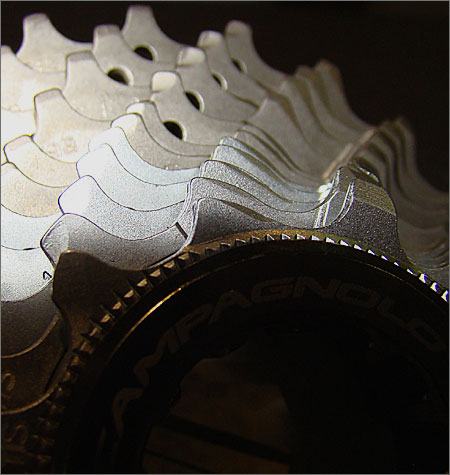 And after stealing a bike from another display and walking it over to the Elite Trainer booth I can say the new tighter spacing makes for a teeny bit quicker shifts.

The cog count is the news but the biggest difference and the one that seems to be causing the biggest stir is the new lever shape. 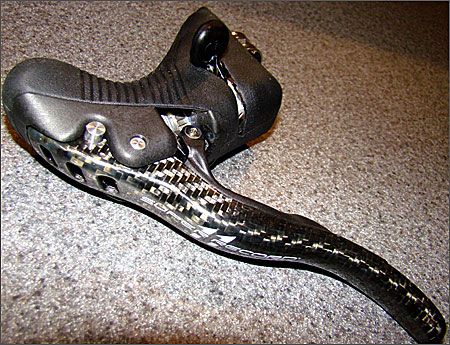 I can’t say who should or should not like it. But I can say that those thinking it might spoil the reach or feel might be mistaken. 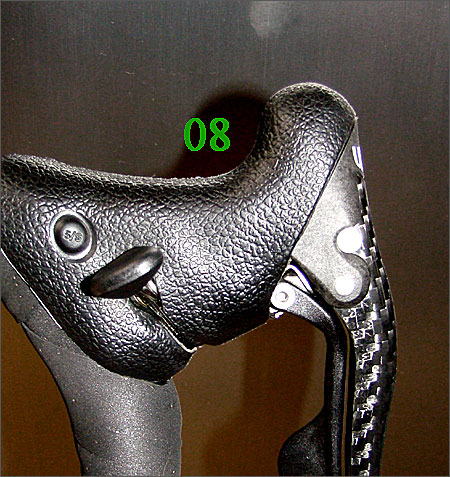 But the extended new profile doesn’t move the lever pivot much and with the new shape, the grab points are not as different as the looks might suggest. What the new shape does do is simply extend the lever top making for an added hand position… 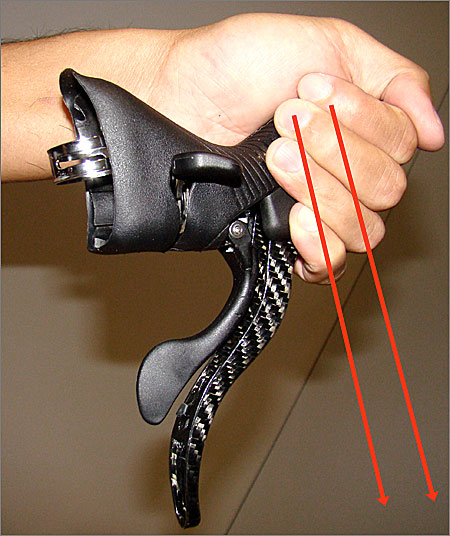 The first line marks where the old lever peaked and the second line is where the new lever ends, giving you more to grip

The profile is a little less flat than the old, but most new bar manufacturers were simply gravitating toward shapes that fit Shimano and SRAM profile’s better. This will sit well with more bars and still allow a fairly flat transition with more bars.

Campy have also changed the shape and look of their rear derailleur. It now has a bit more carbon and a bolder blockier look. 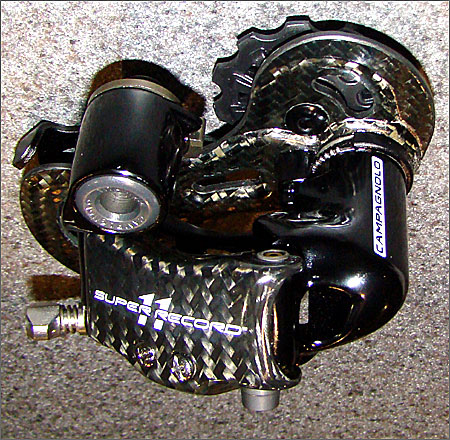 They also decided to upgrade their guts. Campy are now running Ceramics in their newly shaped and “drilled out” pulleys, saving weight in both the plastics and bearings while smoothing the action. 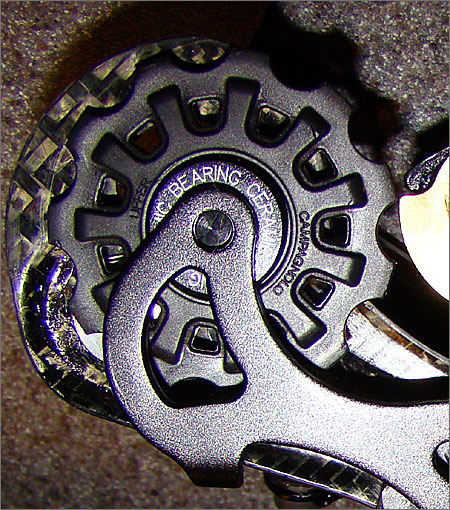 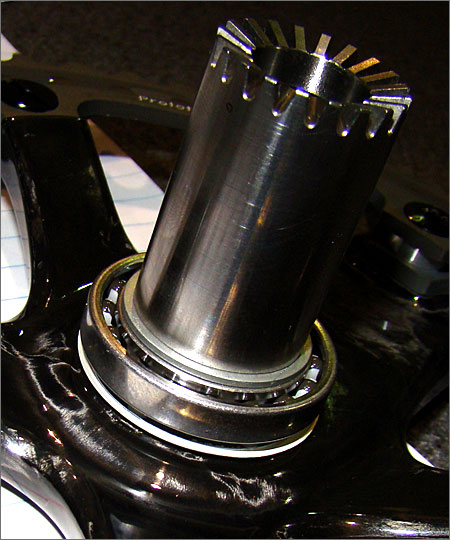 Maybe the one thing we’re hoping for is that the aftermarket tool guys get together and create a chain tool that will work on par with Campy’s unit. 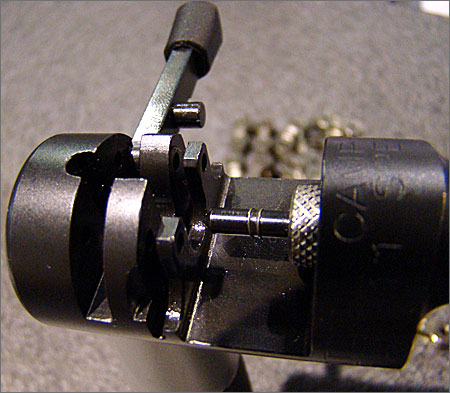 The house version can insert a pin with the extremely tight tolerances needed to have a system this tight operating well. But toting it around is impractical and not everyone will enjoy the price, so Get On It Tool Guys!!

Look Cycles have been busy as well…

Sure they have a new TT bike that very nearly (but not quite) makes me want to ride a time trial bike! 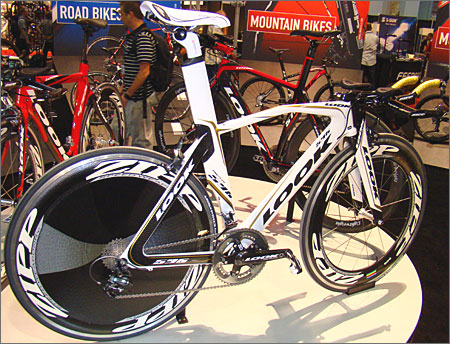 And they’ve updated their multi adjustable stem to shed a load of weight while allowing for the same massive adjustment. 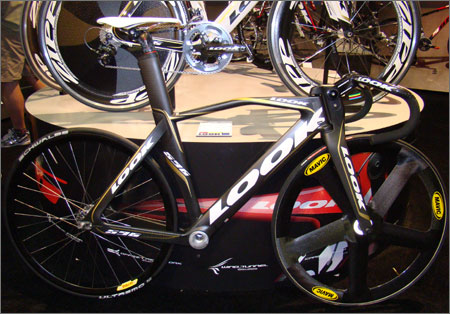 But a load of work has gone in to a couple of new things, starting with a very cool cleat positioning system for the Keo. It involves a sensor unit that is mounted into each crank arm and looks like a pedal with a box attached… 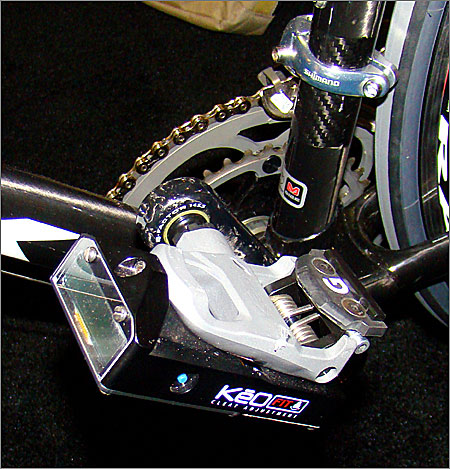 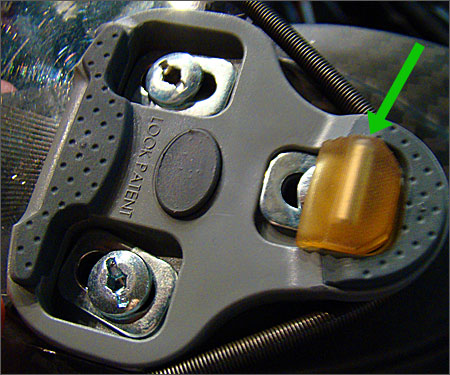 Then you clip in and ride as normal while the little box monitors your cleat / fool angle as well as float. Once done, the test gives you back data on where your cleat should be and what angle it could be at. It also suggests how much float you’ll need so that you can select the right cleat type.

Once you have that, you pull off the test cleats and put your own standard cleats on but leave the screws a bit loose. Then you strap on the positioning board… 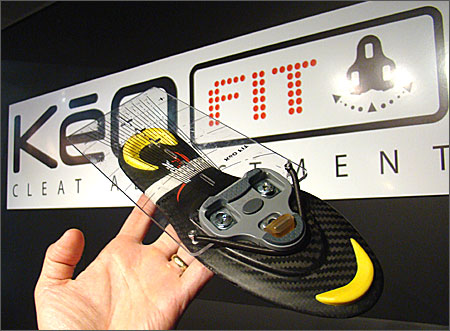 And use the board to align and place the cleat, then tighten it down…

When finished, your cleats will be placed in the optimum position and angle.

Look also get kudos for a new ZED crank and pedal system.

The cranks alone are pretty slick with a solid carbon body and spider that look sweet and will take standard and compact rings. 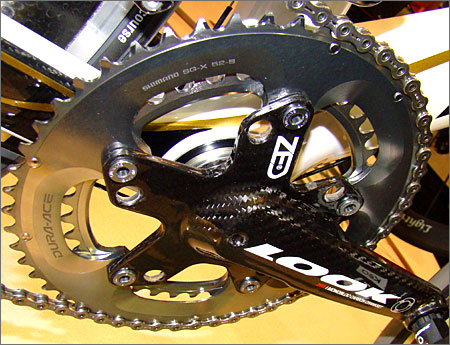 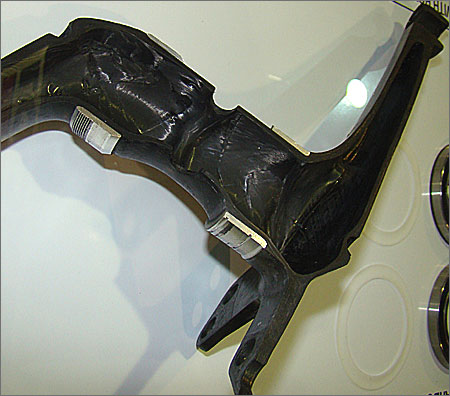 The structure and mold form and detail combine to toss out some impressive stiffness to weight ratio numbers, but what I am also impressed with is the design’s ability to be three different lengths with a single axle at the weight the system achieves. There are other multiple length designs, but none at this weight and that is the result of a design system utilizing Looks ZED pedals. 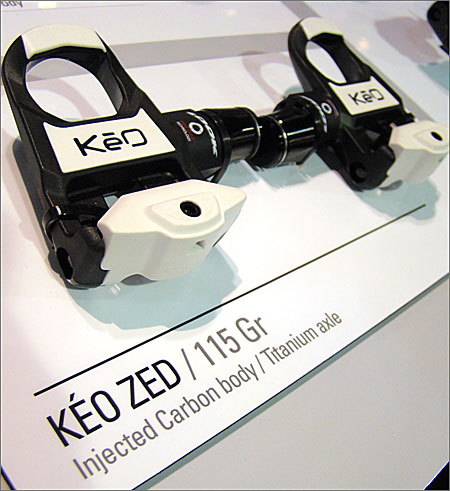 The pedal fastens in a way that spreads the stress where a pedal is inserted and that means that no metal sleeves or support structures are required in the crank. 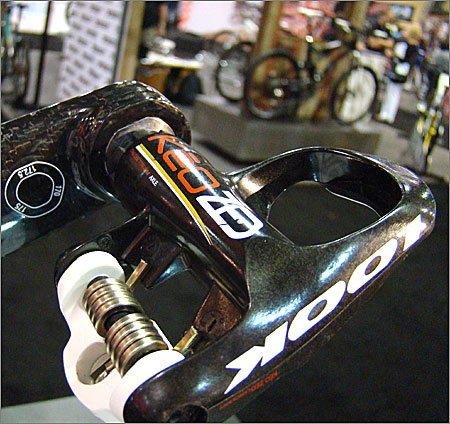 That’s new thinking and really what Interbike is all about for geeks like me.

Jagwire brought a host of goodies as well.

You can pretty much count on all of the cables I run getting an upgrade of Jagwire Ripcord Teflon coated cables (except the smarty-pants at SRAM who upgrade to Teflon coated shifter cables as stock items). 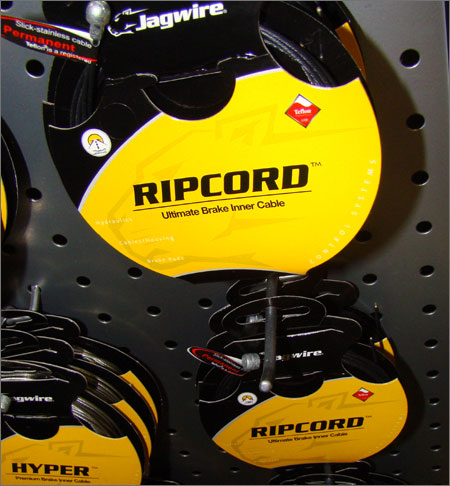 Now they’ve created what they consider to be their premium complete cable sets (including housings and hardware) tossing in colors to full Ripcord packages.

They have also upgraded / expanded the selection for the metal housing shells in the Switch line up. 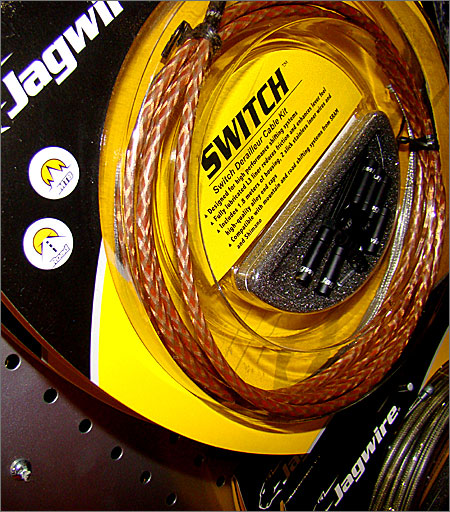 And of course they have a full line up of every kind of cable accessory you can think of, from inline and frame mounted adjusters, multiple styles of cable scuff guards and end caps you can think of, also in basic metal or whit or black or…. 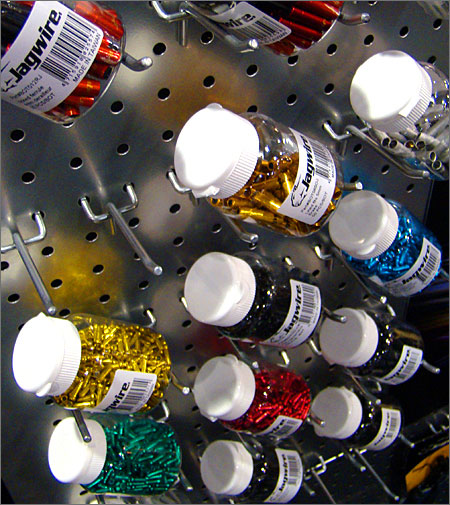 The last thing I’ll run out is from one of the more nondescript booths at the show.

Frankly, the energy bar and energy drink vendors are the absolute “LIFE BLOOD” of interbike. If not for these folks, I would guess that 60% of the show floor would be rendered ineffective by noon every day.

The big players are all there, but my favorite find was Phil… And Phil’s product is the Power Pancake. 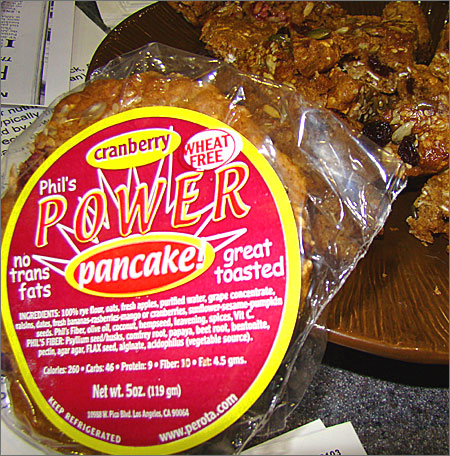 Now this one’s obscure… The website listed on the package is different. Google “Power Pancake” and you can find a myspace page but that’s it…

So here’s my plea.

Phil, get more on the site! Or someone call Gary Erickson or the Powerbar folks or Lara Merriken… Get some capital and get bigger!

This was the best tasting, easiest chewing, nicest consistency thing at the show. Don’t like “pancake”? Fine… Change it. Make em in a bar shape. Make in the shape of crosses, the star of David or the crescent moon and star of Islam for all I care, but somebody get these things in people’s mouths!