I don’t know who cooks up the designs for these guys, but they found a way to add a little swerve and curve to some of the super light stuff out there and toss in a little stiffness to boot. We get a leg over the Kuota Kredo.

I had the first Kuota, the Khan (review HERE) that anyone had seen in this part of the world, only to be surrounded by them in a very short time (damn it!). Pretty typical though, as once somebody gets an up close look at a bike from Kuota, it’s like they can’t help themselves… 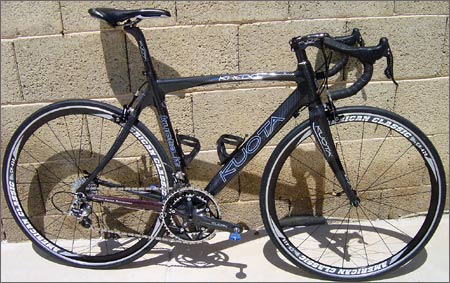 Evidence of Kuota’s good looks and solid build occurred just after the Interbike Trade show last year, as Kuota sold more bikes by February than they thought they would for the entire year (and half of the country was still frozen). It’s damn near impossible to walk or ride past one and not get caught staring (in fact it will annoy the hell out of you if you are riding one, because people start holding a line like a cat 5’er running disc wheels in a windy Crit, trying to get a look).

In the Khan Review, I brought up the line; “there’s an old saying that beauty is only skin deep, so say hello to something that’s all skin”. No change at all with the Kredo. I had a custom Paint shop offer to lay a few slick lines and a picture over (of Gino Bartali’s head no less…) a section of the clear coat and said no thanks. I like the paint on some of the new stuff available, but naked Carbon is all I need for now and it matches everything… (although a tinted blue or red cleat coat over Carbon would look insanely beautiful on these bikes!).

The bike itself is built with a tilt toward performance, but is still a comfortable ride. Kuota have geared this bike for stiffness and acceleration as a priority and succeeded in providing an even better launch pad that the Khan (with a little less buttery ride). They also do it in a very light package that, along with a set of Light Carbon Tubulars had this thing tipping the scales hardly at all… In fact, if Cannondale’s Six thirteen gets you arrested, this bike will get you tossed in with Hannibal Lechter and do so without needing aluminum lugs (the Cannondale is reportedly a screamer by the way…watch for our sneak peak soon). 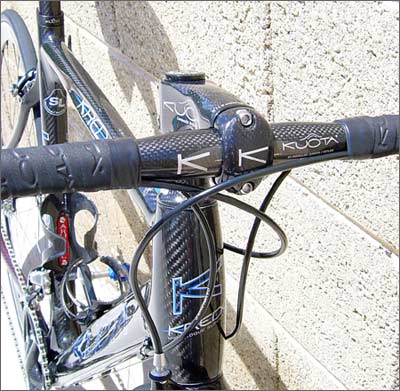 The super sized head tube is the first evidence that Kuota were aiming for stiffness. It is just plain large, and houses a special head set that is larger at the base and tapers to a standard 1-18th size at the stem. This is for stability and strength in an area that really does need it. Not that I want everyone to copy Kuota (or Principia who have been doing this for a few years), but it would be great to see more manufacturers reinforcing critical points like the Steer tube / Crown transition on forks rather than finding ways to take material out of bikes in their never ending dick measuring contest for the bike with the lowest weight. You’ll notice the reinforced area on the fork… 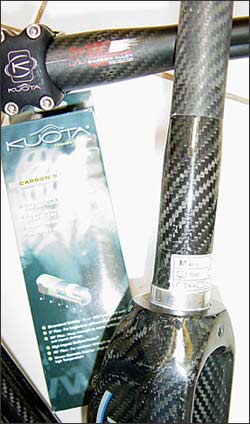 The Fork, Stem and Bars are Kuota’s house brand. They have an All Carbon set up, or a combination Carbon Reinforced Aluminum Bar. They also have a house branded set of cranks that look perfect with any of their bikes and perform very well…

On to the frame, Kuota’s standard for sexy curvy Carbon is still in full effect with the Kredo, but the curves are a little tighter than on the Khan. I’d say the Kredo is more Anna Kounikova to the Khan’s Pam Anderson… 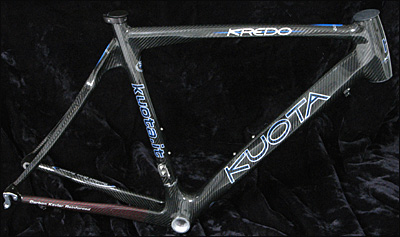 The Chain stays are fairly identical to the Khan, and that is a good thing. The drive side has more meat in the walls for stability and rigidity as well as getting the Kevlar wrap. The off side gets the “comfort-spin” section with fiber oriented more for vibration damping, but gets a nice bulge that also aids in stiffness. I’m sure the bulge is placed where it is for a reason, but moving it forward just a touch would help keep me from clicking my heel on it on the rare occasion.

The Chain Stays both start life big at the dropouts and just keep getting bigger until they hit the tightest Butt since Mia Hamm (who trains in Phoenix part of the year and hopefully appreciates the compliment…). The big chain stays (not that Mia’s stays are big…), oversized seat tube and second widest down-tube I have ever seen, all come together to create a power platform that just screams for abuse. (note the different shapes of the chain stays shown below the BB) 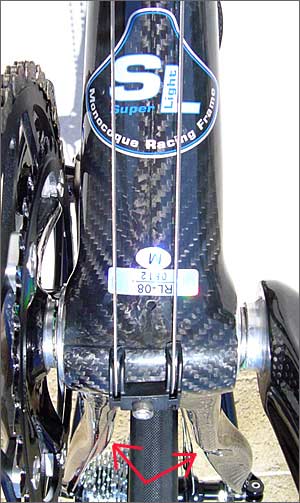 The Top tube gets a shape that helps prevent torsion (the cross section), and also dissipate vibration (the kind of “Hump” shape). One question is “Is this frame UCI legal? [Quick email from Kuota… “Yes it is legal”] 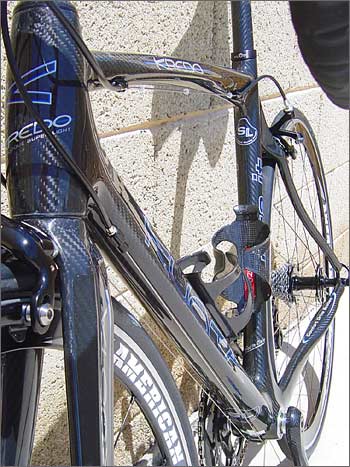 No doubt that the frame has more life to it than some of the “single season” light weights out there, as the Kredo gets pummeled by an independent lab and scores better than quite a few heavier Metal frames on the market, earning top marks. 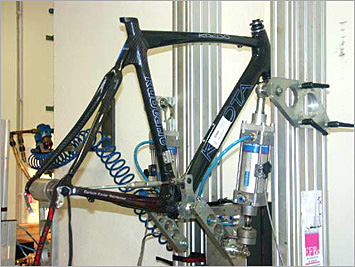 The Kredo rides well. It is a little less smooth than the Khan, but most bikes are, and when compared to most of the bikes that are this stiff, it’s an exceptional ride. The responsive feel is accentuated by an oversized stem and stout bars. The Geometry is pretty average compared to a few other sloping Carbon bikes, but the handling is quick, having partly to do with the light overall weight and stiff fork. I would like to see a couple more sizes, but Kuota space the Kredo sizes a lot like Giant and other sloping manufacturers, so you should be able to get what you need if you’re not an oversized rider.

Bottom line on the Kredo is that it is a light weight performer in the mold of several new bikes hitting today. You’ll see BMC, Scott, Principia and others here very soon, and they also go the route of supergigantific down-tubes and extremely stable Bottom Bracket areas. Bikes these days are getting better and doing so very quickly. Companies like Kuota are using more of the inherent potential of Carbon fiber than ever and it’s to everyone’s benefit as manufacturers push each other to new extremes. The Kredo is right at the edge of what is available in well done Carbon, choosing great curves and flowing lines to add a little Italian design pop to very good functionality.

You can also give their North American Distributor a call at 514-219-2890 for Dealer inquiries.

Wisdom of Age 4: An Inside View