The new CX300 shoe by Lake Cycling keeps up the product line changes and advances. It may be the perfect warm weather addition as temps (at least in Arizona) are already in the 90’s, and shoe ventilation goes from marketing pitch line to an absolute concern.

To beat the heat, Lake Cycling have stepped up with their CX300. 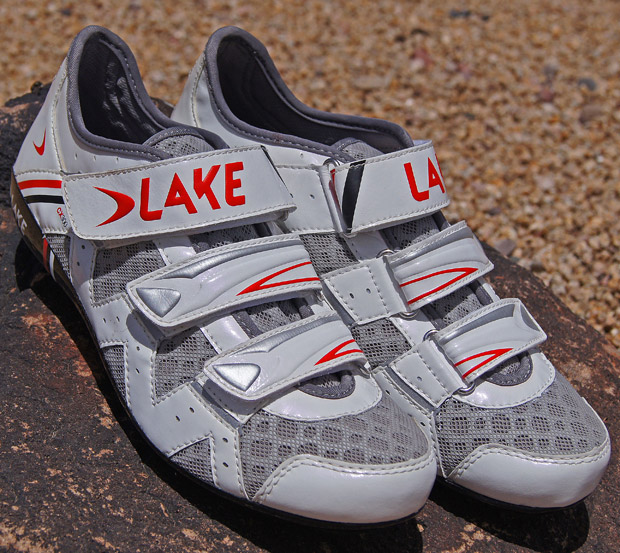 Have any of you ever looked at the two strap / open mesh build of Tri shoes and thought “damn I wish there were road shoes with open mesh that ventilated like those (but had better retention support)”?

I have… Lake make a Tri shoe with venting material just like this and I’ve heard people mentioned to them before that a road version would be kick-ass. Fast forward to Sea Otter this year and my eyes went past these and my brain flashed “tri-shoe” and I completely missed noticing them.

A few minutes later I was scrolling through pictures trying to show someone Lake’s moldable foot-beds when I noted the CX300 again and my brain flashed “3straps”… I stopped and flipped back a few picks and just started walking back toward the Stage Race Distribution (Lake’s North American Distributor) booth.

I picked it up and noted right away it was a road design for sure and also noted that it was both VERY light. I also noted that the top was soft and thin and that the open mesh material didn’t feel like any other shoe upper that I could remember. 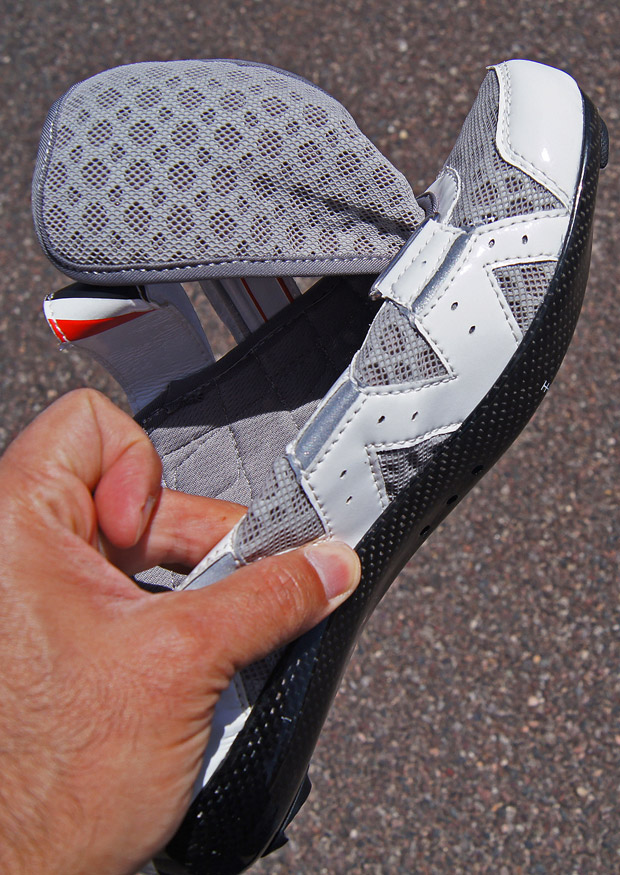 Very flexible to the touch versus nearly any other road shoe.

I asked what the deal was with the holes in the mesh and “why not have full length channels to vent and dry things even more/faster?”

The materials and design are the cool (literally) part of this shoe…
It turns out they actually want the wind / air to get trapped in the little circular holes rather than opening the venting up further for a reason (and it’s unique to this shoe I believe). 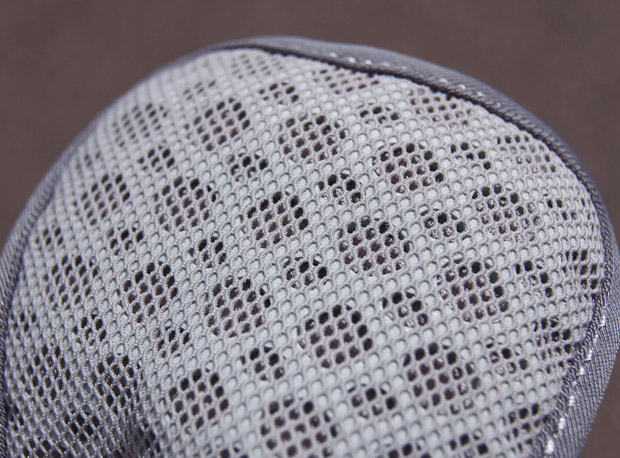 The first layer is a weave of carbonized bamboo fabric against your foot. It’s hydrophilic and acts to attract and pull water into itself & away from your feet. It’s also antimicrobial. 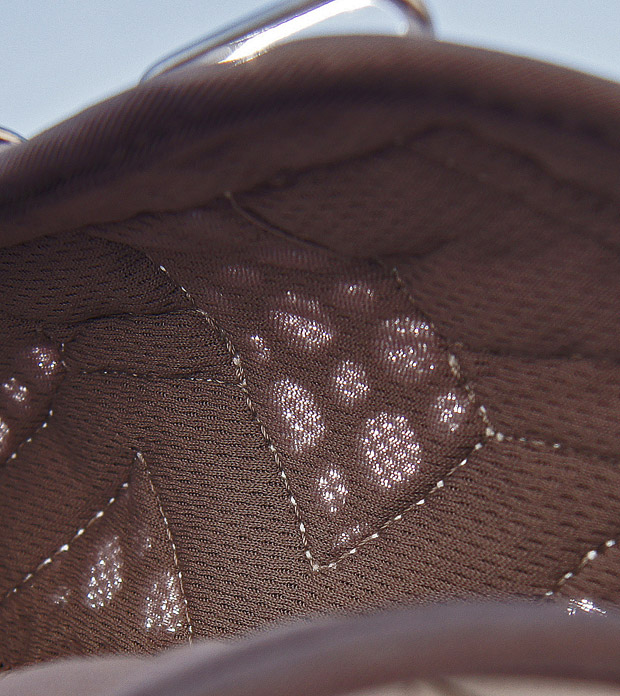 The second layer looks quite a bit like a thin/firm sponge. It’s made from NuFoam, a closed cell foam. This acts as a spacer that allows air to circulate inside the holes and interact with the moisture pulled off of the foot. This air circulation creates an evaporative effect very close to the foot. 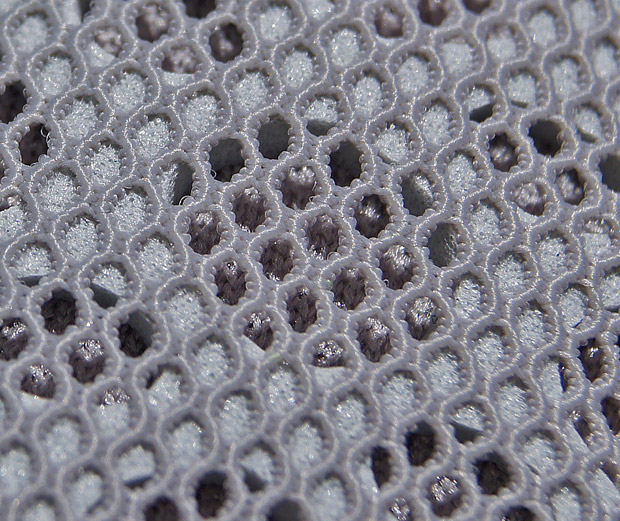 The top layer is a loose weave designed for strength to hold it all together and breathability / letting in air flow. 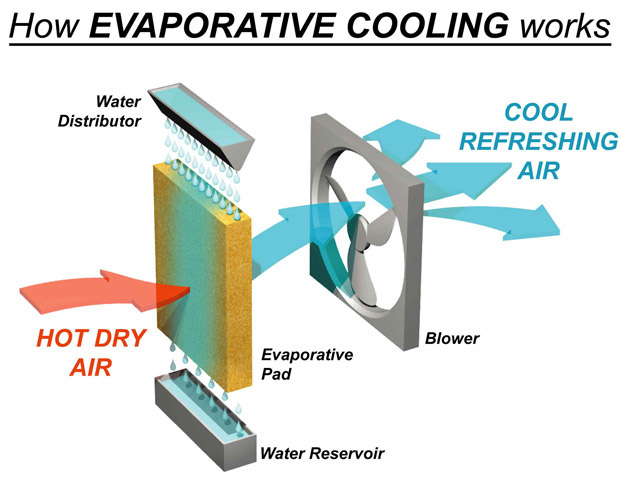 In the CX300’s case, the house is your shoe and doesn’t need a fan… Your foot is the water distributor and the carbonized bamboo layer of the shoe acts like the evaporative pad. The holes in the pad facilitate air swirling and the net effect is to actively cool your feet.

As it turns out, my suggestion of long / larger air channels would dry things out too quickly at typical performance cycling speeds. A fully dry pad wouldn’t function as well at evaporative cooling.

The rest of the shoe
The upper is flexible and forms well to your foot but there is very little stretch to the solid (white) material made from Tektile Microfiber. This material acts as a framework for the mesh and is also what holds your foot in place. 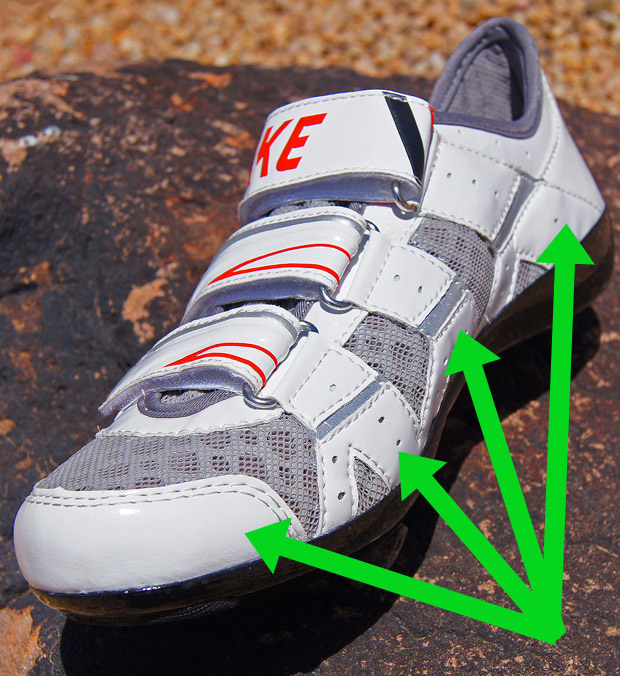 A simple 3-strap closure system is as simple as simple gets. It’s secure, effective and fairly light weight. 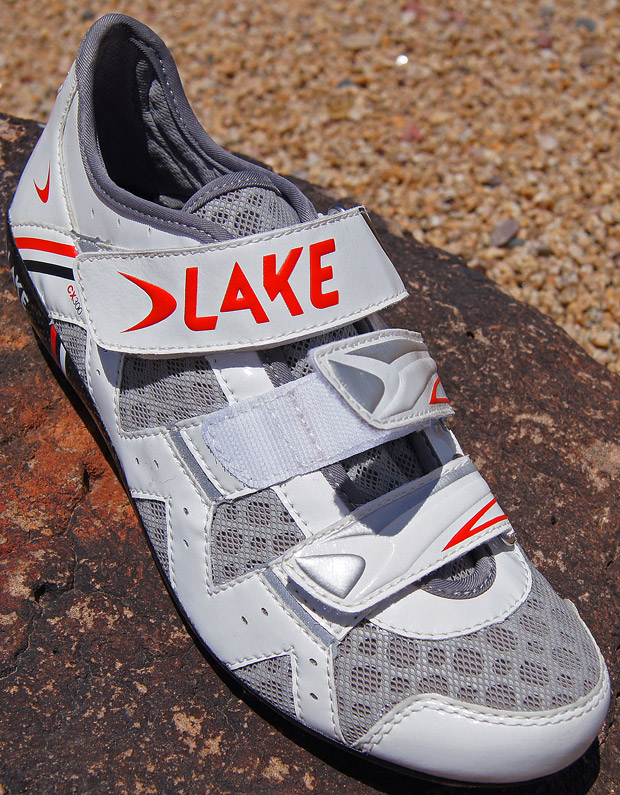 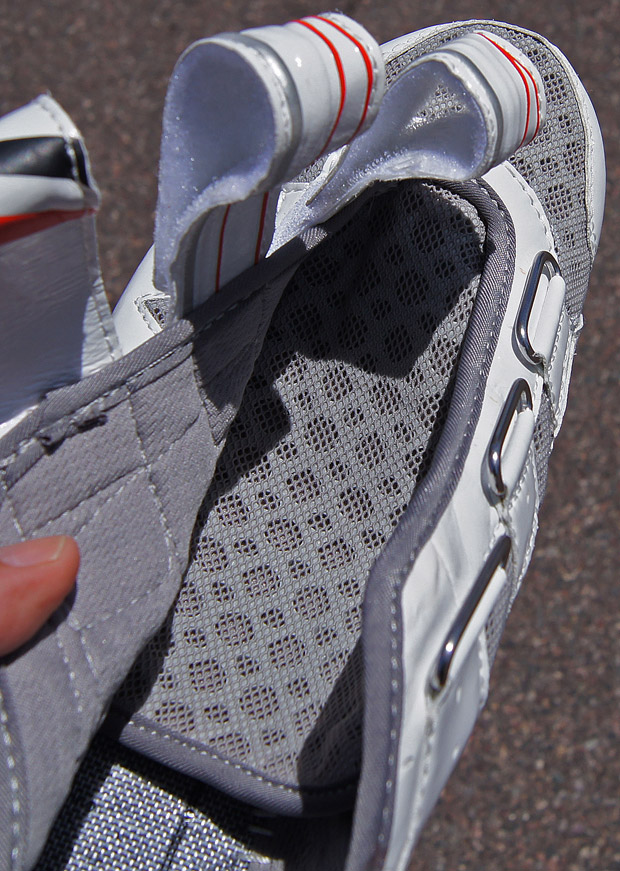 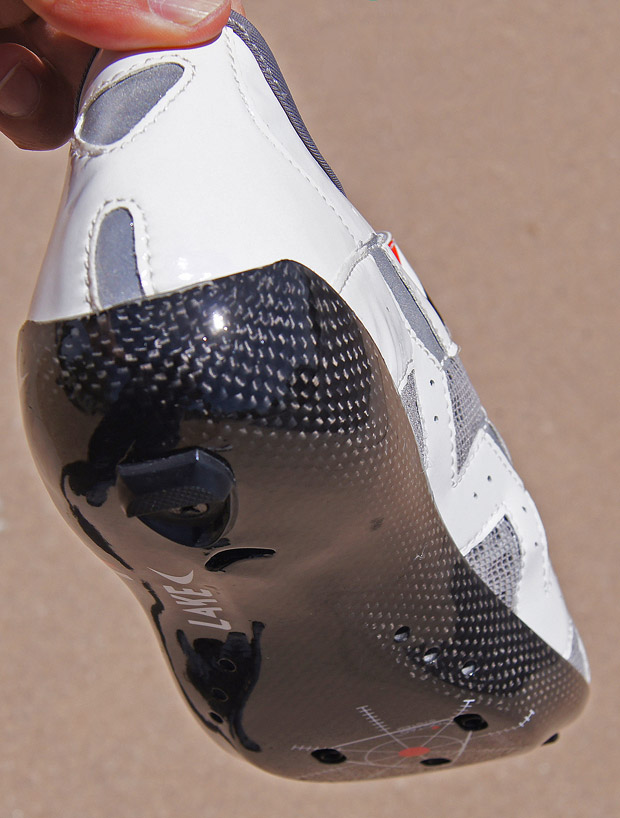 This isn’t a moldable shoe as is the case with other Lake designs. It’s a double layer system with a full carbon outsole and a perforated glass fiber layer that is suspended 3-4mm above the carbon sole.

That 3-4mm gap between the outsole allows for some venting / genuine air circulation in the space between the inside foot-bed and the outside that’s exposed to the heat coming off the road.

There are vents at the Toe… 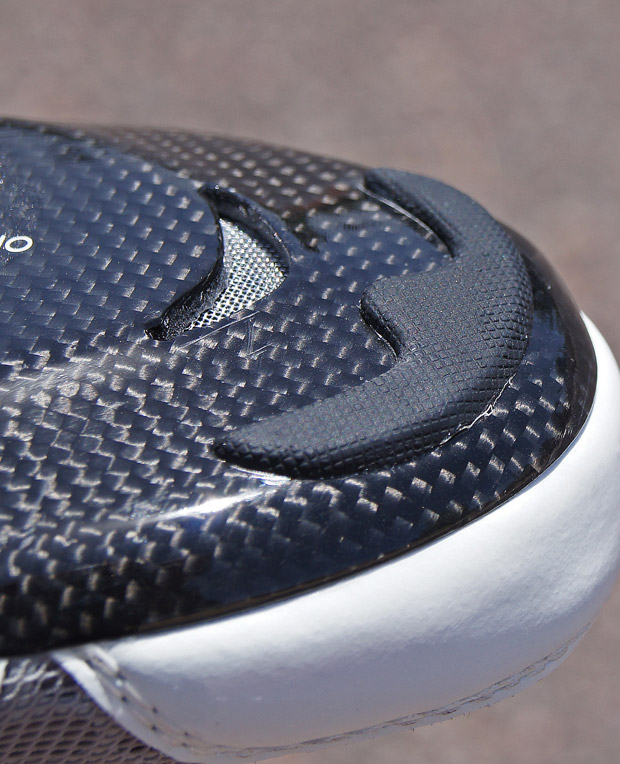 As well as venting in the mid-foot and just ahead of the heel. 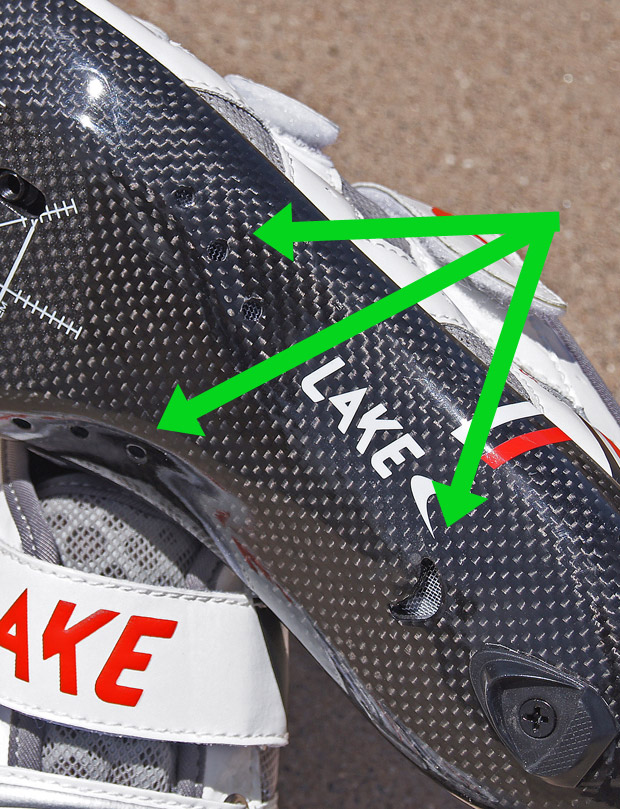 The sole itself is solid carbon… 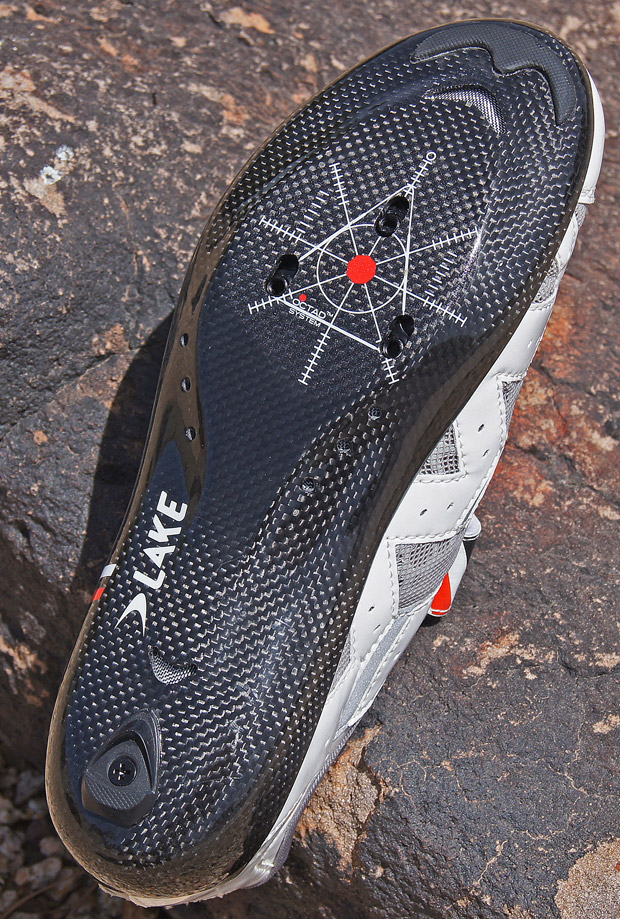 And the cleat mounting surface is roughed to help prevent slipping. 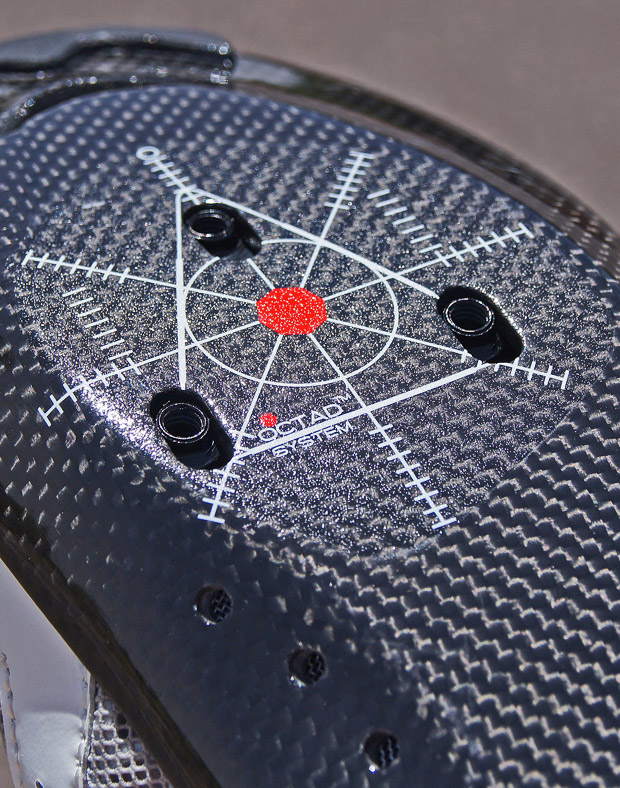 With that in mind, about the best way I could determine if the cooling tech worked was to try a couple of tests… The first was wearing two different shoes.

The open mesh was easily cooler than the more solid material of the other shoe. In 65 degree weather, the foot in this shoe was downright cold while the other foot was fine in the less breathable shoe.

The second test involved both feet in the CX300’s and a damp sock… (shut up, it worked).

I put the sock under a faucet and made it damp (a light ring out before slipping it on and putting on the shoes) then walked a bit so that the shoe would have a chance to pull some of that moisture to the mesh of the shoe itself.

In 80 degree weather (with low humidity), the wet sock shoe was immediately cooler… And as more backup to the thought that it functions in use, after an hour or so of riding, both feet were cooler (as my “control foot” sweated a bit) than the dry foot was at the start of the ride.

Now the kicker here is that Evap cooling works a lot better in low-humidity climates. That said, these shoes are extremely well vented and even in muggy climates, these will breathe better than most other shoes that don’t feature LOTS of venting / mesh.

All that is to say that these are fantastically well vented shoes.

As for the rest of the shoe’s features, the sole for the CX300 is quite stiff end to end in use. That’s not to say that it’s “better” than less stiff shoes because sole stiffness is a personal thing. Some folks like LOTS of stiffness and some like to have a bit of flex and movement (though not too much flex where you can feel your cleat mounts and create hot spots).

There is also a notable amount if arch support / sole shape for the CX300. These are definitely not made like several other brands that have moved to a much more flat inside surface.

One definite place where this extra shape is a plus is that the insole is fairly thin. But with a little more shape and arch support to the sole, a thin flexible (floppy) foot bed only needs to provide a little cushioning versus added support (an area where most shoes fail, regardless of price).

I have a neutral arch shape and these fit very well without any aftermarket orthotic.

The three strap closure might seem a bit old school with wire type closure systems dominating the market (including several of Lake’s models). But in the case of the very flexible upper material, the three strap system works better than placing a hard BOA ratchet some place on the shoe. Boa works fantastically well, but it likes a bit more solid material as a foundation. The three straps are secure, simple to use and spread the load very well where they’re placed.

Also note this shoe has A LOT of interior headroom… This is the most roomy shoe I’ve put on my feet in a long time.

The shoe length and fit were right, so it wasn’t just a sizing thing. I take the same size in these as other major brands but these will be much more accommodating to shoe inserts and for people with high arches / insteps or with higher foot volume in general.

You’ll find them available now, just in time for the heat. They’re distributed through Stage Race Distribution. Suggested retail is $299.