Just about that time of year again where Helmets serve a purpose greater than simply blocking freezing cold… With that in mind Pez get a care package from our buddies at QBP and Trialtir with their latest headwear from Lazer and LAS. That comes in the form of their range topping Genesis and first up, the Haxial.

Fairly new to the market (but not to Pez) are Helmet purveyors LAS. A couple of years ago, Dennis Menchov dumped a brand new team edition Haxial at the very grateful feet of a buddy of mine at the bottom of a finishing climb at the TDF and so I got to wear one round Phoenix a bit, way before they came ashore here. Since then, Trialtir U.S.A. have decided to add to an already drool drawing product pool (Colnago, Northwave, Biemme…) by bringing them to the good old USA. And what better place for us to start the North American public push than with LAS’ new version HAXIAL 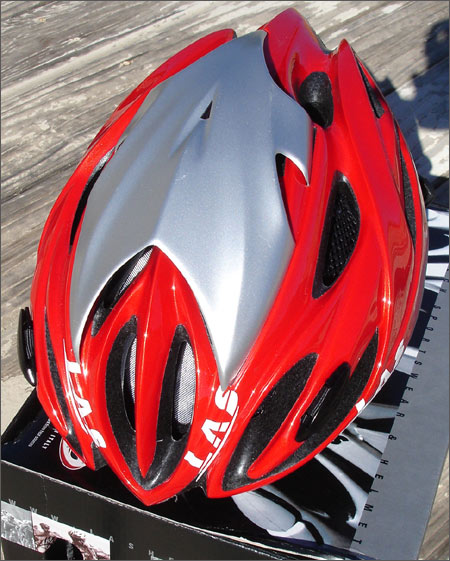 Right off this is an easy helmet to pick out in a crowd. The distinct “Hood Scoop” ventilator at the top is really a one of a kind, and one of the more prominent pieces of hardware in the Pro Peloton. Surely that’s added to by sticking it on the head of the guy my wife calls “the hottest looking man ever on a bike”… 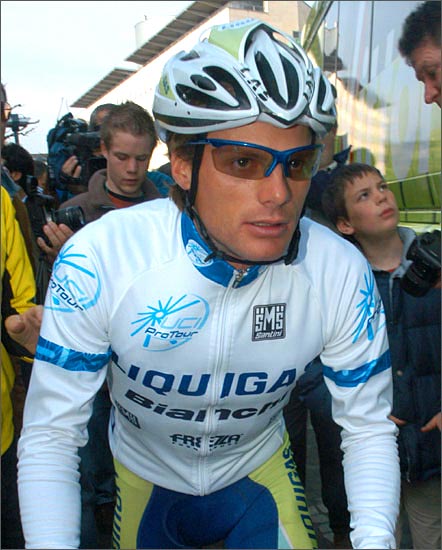 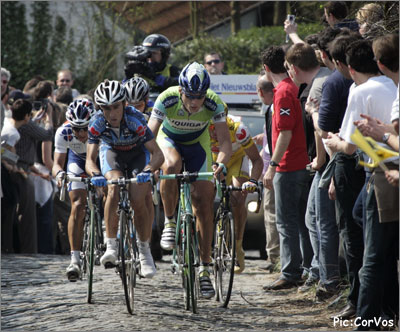 But then this is PEZ, so we’re never satisfied until we’ve done something ourselves to monkey with a product… 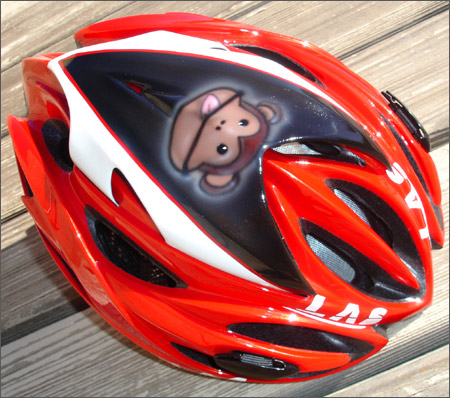 The Ventilator not only looks cool, it does function in the same fashion that some aerodynamics work on vents in motor sport. The scoop kinda draws wind over the holes a little quicker, taking heat that might linger in the pits away with it… 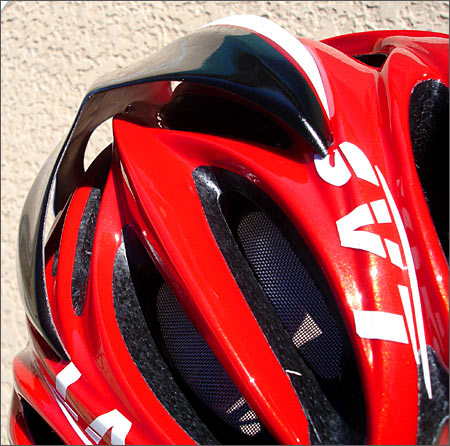 Another feature that works pretty effectively is the inner cover made from Coolmax. It soaks up sweat and moves it to the covered vents (23 in all), eliminating the need for under helmet head coverings like caps or (for the severely fashion challenged) bandanas. 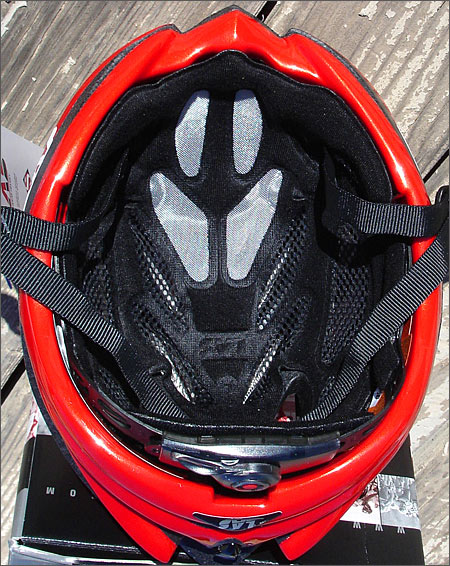 While in place, the screens also keep the odd bee out the bonnet and the whole thing is removable should you choose… 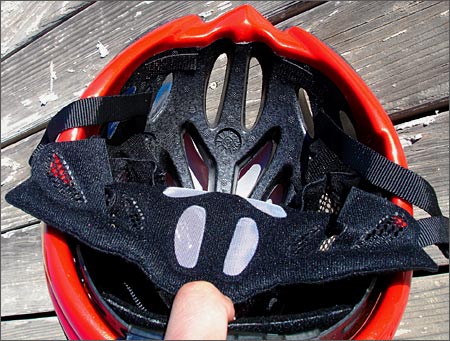 The only thing to note as you peel away the inner liner is that the vent holes lack channeling between them that would make the helmet breath much more effectively by increasing the airflow through the lid and across the Coolmax liner. That said, it wicks moisture well and should keep things breezy in all but the hottest spots.

Hang on…
The Haxial features the “VELOX size system” as noggin grip. It’s an easy to use ratchet system that tightens with a few clicks of the lever and releases with an easy to find button push… 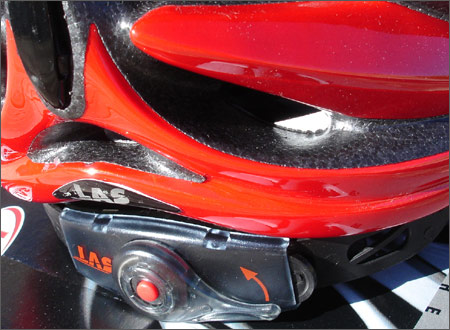 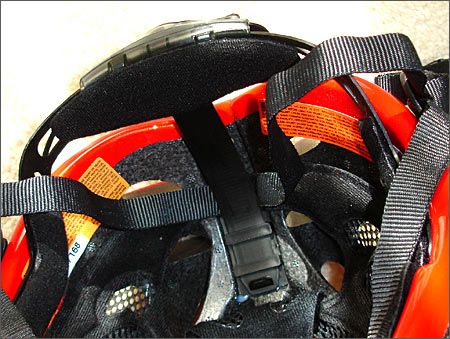 This is a pretty light lid. With the aerator on top, it tips in at 260 grams according to LAS scales. It’s a neutral shape that should fit most heads (maybe leans to the oval more than round, but so do “most” heads…). The liner does a great job soaking sweat and also makes for a comfortable bit of padding (You’ll need to remove the Velcro roughies should you go without…).

I thought the retention system would be a pain, as nothing should work for such a broad size range, but the Haxial pulls it off nicely. The shape of the exterior is kind of modular, such that it doesn’t look overly massive on a small man (or woman’s) bean or give big people the “fat man in a little coat” look.

You can go with, or snatch off the hood scoop. And you can order a few different premium looks as well… 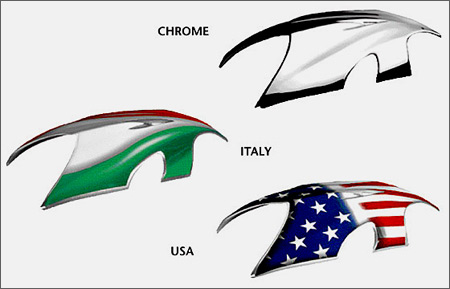 No special monkey on offer, but then you’re not as (self) important as I am, so you’ll have to hit up your own air brush guy… Just an FYI, it’s really easy for them a painter to do and probably a lot cheaper than you think.

LAS also feature a few other helmet types as well as several other colors of the Haxial, so hit up Trialtir USA’s web page and check out the line!

Lazer’s Helmet’s have been on Pez before… We had their former stable topping blade a while back and were pretty happy with that.

This time around we get their new head er, head, in the form of the Genesis 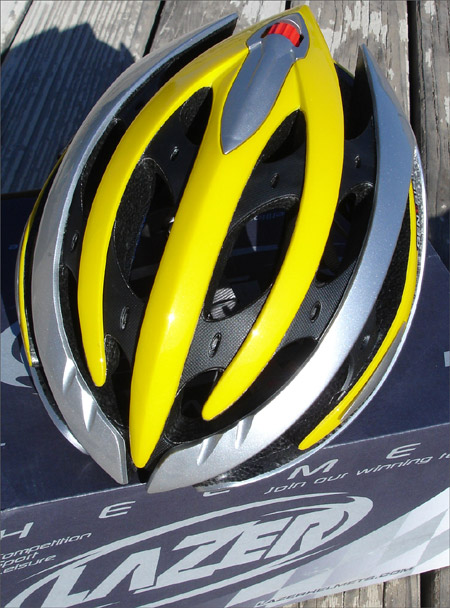 And that said, and because we’ve had the LAS lid longer, this amounts to the first time Lazer’s Genesis has come in second in 2006, as this guy (below) apparently feels like taking everything for himself! 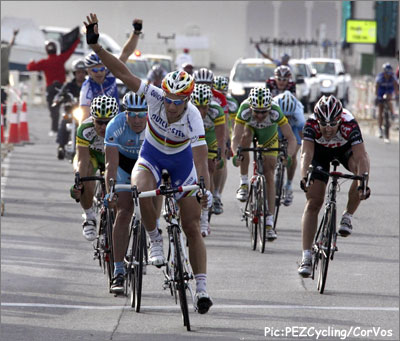 Of course LAZER are known for fast men in other sports as well (note the plug Scott…). They just one one of the best tests of pure Moto skill taking the S1 SuperMoto overall Championship! 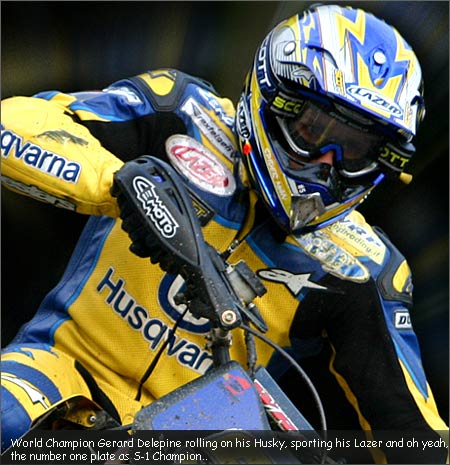 And with insane speed and head protection in mind, one of the most notable features sits between the color on the genesis and is the exposed portion of Lazer’s Rigidity Brace System (RBS) 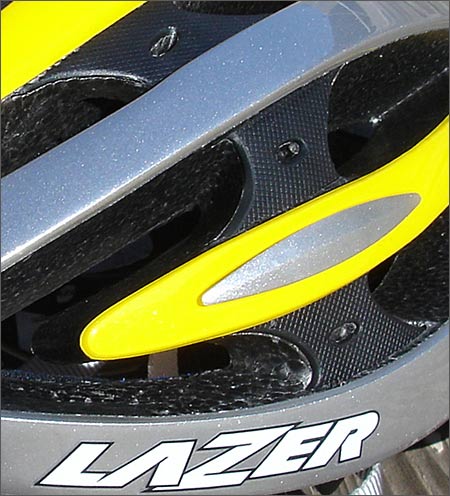 This is said to be a double impact protection that helps things stay together as much as possible, as sometimes the first blow to your head isn’t the last. An endoskeleton running through the foam is a feature that not all helmets have, but every one should, and it’s a very good testament to the fact that LAZER know what a helmets primary function is.

At first glance, you would have noted that this helmet features deep vent channels and padding like lots of top end lids. That was until I put in a pathetic effort at drawing a red highlight line around things so that you would note one of the better helmet features, industry wide that have been implemented in a long while… 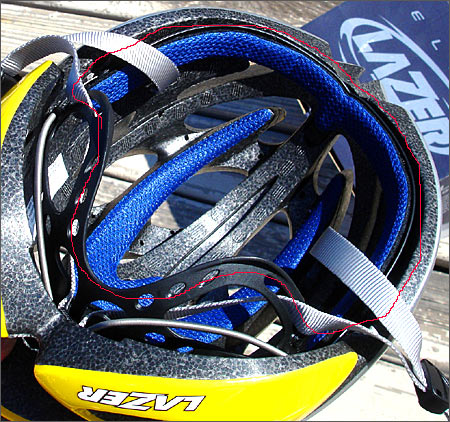 My favorite feature for the Genesis is it’s “Rollsys” retention system that is at once a more secure fit and also a more comfortable system… In the photo above, you’ll note that the retention runs all the way around.

It wraps your head as a unit, rather than doing what most helmets do, which is simply squishing your head against the front of the helmet by pushing on the back. Instead your head is suspended and held in place with a softer yet secure strap…

When relaxed, you’ll note that the Rollsys expands all the way around, not leaving much gap round the outside (in green). 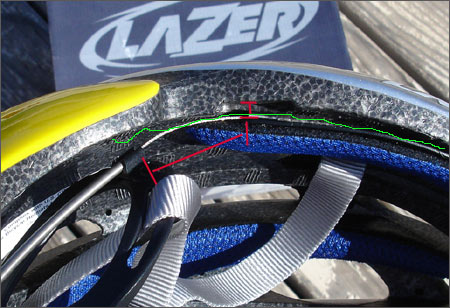 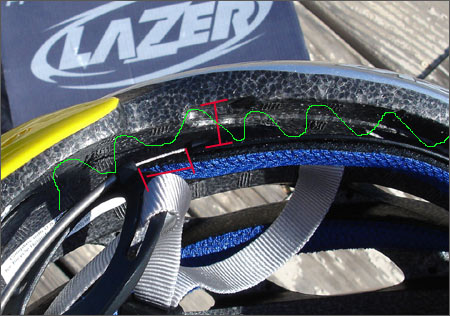 This is dialed to fit easily (gloves or not) from the top outside of the lid. 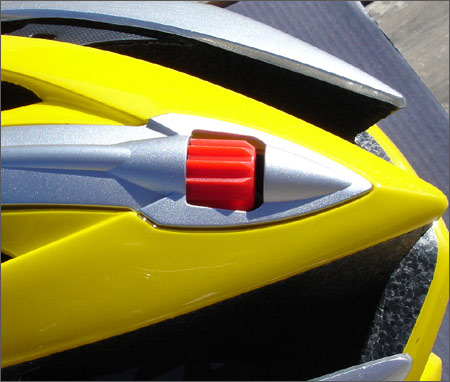 And topping it off is that the back of the system doesn’t have a lot going on in the form of hardware, meaning it’s shape is friendly to back turned caps, ponytails and yes, you Rambo’s can have your flowing headbands and Hulkamania bandanas 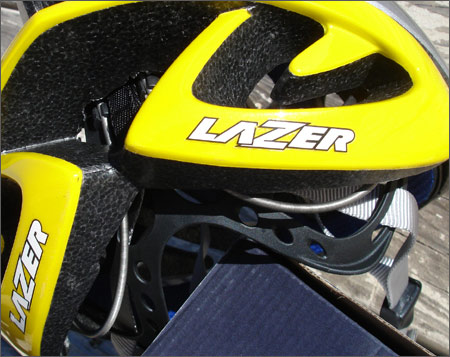 All this adds up to a retention system that will just plain fit every shape of head, as the retention system molds to the head shape instead of pushing your head forward and expecting your head to fit the helmet. The added benefit to this system is in great ventilation, as there is a gap most of the way around, and a bit even at the front.

Go take a peak at the LAZER Helmet Website and if you can’t find a retailer, visit the QBP website, drop em a line and ask them where to buy one or try one.

Where To Get ‘Em
• Check out WiseCycleBuys