“We’d really like you guys to keep this stuff under wraps until June 21.” That was the directive from Veltec Sports and LOOK Cycles as myself and 7 other magazine and web editors gathered in Hyatt San Jose last Thursday to witness the newest coolest gear from LOOK’s 2005 line-up.

Veltec and LOOK were gracious enough to put me on a plane to join ’em, and I’m no dummy – like I was gonna miss this?… ShaAaa!

So we were sworn to secrecy – but then… somewhere in Belgium – word was leaked! So Veltec called at Friday night to clear us for print… “Let ‘er rip”! 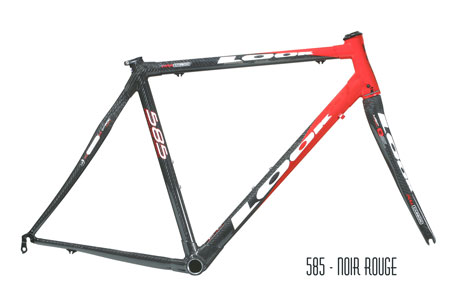 The new 585 Carbon frame comes in your choice of all black, or black and red.

In the room were the usual suspects – “the media that matters in North America” as they told us, with a couple of notable exceptions… (you’ll have to look around the web to figure out who’s NOT releasing this story today…) Okay, enough gloating… Suffice to say we were darn pleased to be included in the “chosen few”.

The French know a lot about making wine – we all know that – but I can tell you they also know a heckuva lot about working with Carbon Fiber – at least the French folks at LOOK do. LOOK have long been an innovator in cycling – they brought clipless pedals to the masses, and were pioneers in building carbon bikes.

Advancing the evolution of carbon is high on their list, and they recently built a new factory in Tunisia that produces ONLY carbon fiber bikes. Only LOOK carbon fiber bikes. In fact, LOOK is one of the few carbon manufacturers that build INHOUSE all their carbon frames and bikes. No outsourcing to far-Eastern concerns here. And get this – they don’t sell their technology or their manufacturing to other bike makers, so when you get a LOOK product, you’re getting it THEIR WAY!

And from what we’ve seen so far, their way is pretty good. C’est tres bon!

HSC 5 SL Carbon FORK
A bunch of the new gear will be revealed at Le Tour, but Credit Agricole is already riding on the new one-piece, 100% carbon forks – the HSC 5 SL. The word is out, but here’s the scoop… 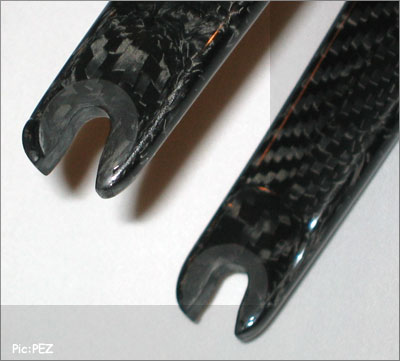 One piece of carbon to makes the whole thing: fork blades, steerer tube, and drop outs. Yup – I said DROP OUTS! They’ve found a way to make carbon that much harder, while maintaining the tortional properties that give us the ride we love. Look for a full test as soon as we can get a pair. The r&d test figures we saw said these blades are lighter (295 grams) and stronger than anything LOOK, or anyone else – has made. MSRP is $499.99US. 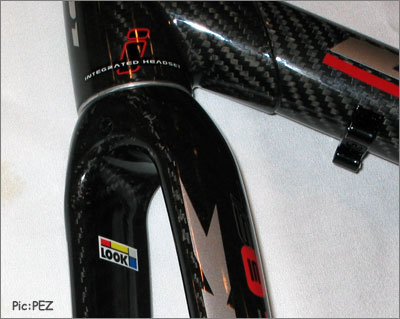 LOOK introduces an all new carbon-fiber frame to go with the fork – the 585. This baby is 100% carbon – combining LOOK’S new super-stiff carbon lugs with their own tube specs. Weight has been reduced to 990 grams. 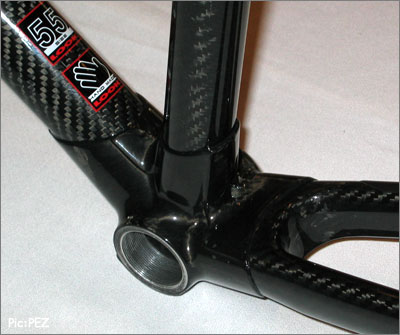 The Bottom Bracket lug is actually Forged Carbon. They use very small fibers, and squish the crap out of ‘em to make ‘em light, stiff, and strong.

The standout is the new carbon fiber lugs. Made from a super-stiff carbon, they’re strong without the bulk we see on some other carbon bikes. Of course the lug carbon is way too stiff to use for the tubes, so they’ve combined a more supple carbon blend for the tubes, to produce a more supple the ride.. 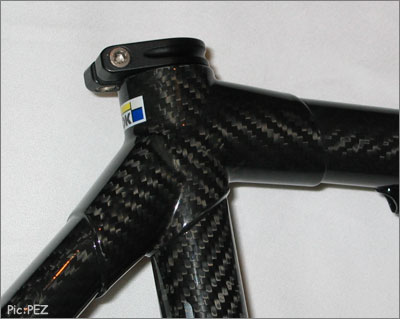 Look for LOOK’s new carbon fiber beauty under Christophe Moreau in this summer’s TDF mountain stages. It will be available in 5 sizes, with progressively sloping top tubes on the smaller frames, and should retail for $3199.99US. Expect delivery post-Interbike, just in time for the holidays! 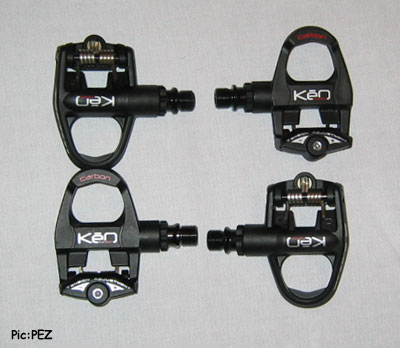 Well cut off my legs and call me shorty! LOOK has at last given us an update of their revolutionary pedal that has been a while coming, and will no doubt be welcomed with open arms and open toes by “cyclisti” everywhere. 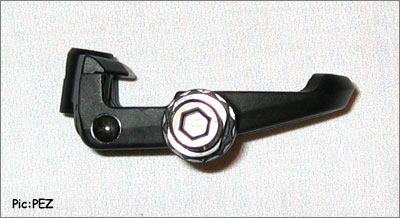 The new pedals are all carbon body, available in Ti or CrMo spindles, are smaller (and lighter) than before (115 grams for CroMo, 95g Ti per pedal), feature stronger springs, and get paired with new cleats that reduce the stack height – be ready to lower your seat! They also look cool – clean lines and sleek design. MSRP is $219.99US a pair. 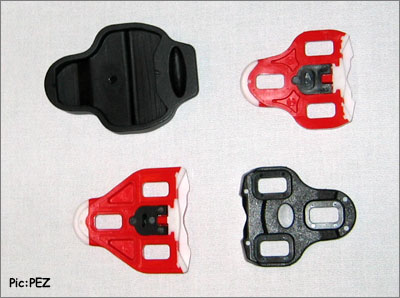 The coolest feature – worthy of a “how come they never thought of this before” award – goes to the inclusion of the new Memory Plate (see the black plate at center of the red cleats above). This is a separate removable plate the sits in the center of the cleat, you align it once, and it remains attached to your pedal when you change the cleat. The upshot is that you never have to re-align your cleats – just snap the new cleat over the memory plate, tighten the screws, and you’re off!

We’ll test everything here as soon as product is available, and look for ‘em in your local shop in the Fall.

Check out the LOOK website for more info as it’s available:
www.LOOKCYCLE.com

Drop by the Veltec Sports website for info on the LOOK and their other fine brands:
www.VELTECSPORTS.com