It was late July and no matter what scandals the Tour could toss up, I was in a good mood – on my way to the LOOK 2008 product line preview as part of a select group of journos – about to see, and ride – the company’s newest gear – including an all new bike – the All Carbon 586 ORIGIN racer.

The venue was the Tollhouse Hotel in Los Gatos California – not far from LOOK USA’s headquarters and even closer to hot sunny days. The morning was chock-a-bloc as Ming Tan, LOOK USA’s head honch took us through the line – from pedals, to road bikes, and even the new very cool all carbon hardtail mtb racer, while the after lunch portion was reserved for quick test rides before the dash back to the airport. 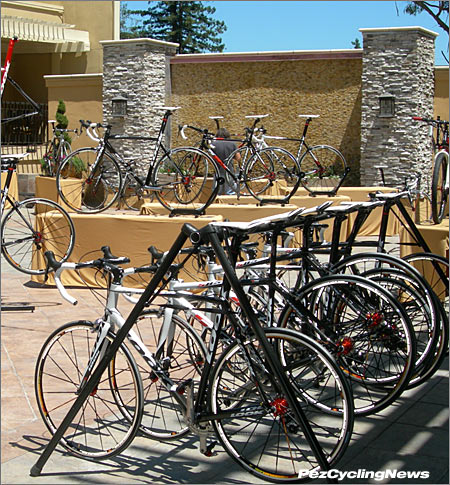 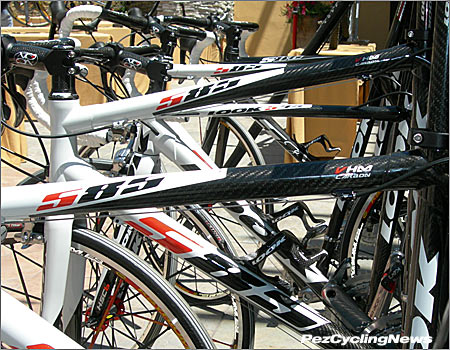 We first reviewed LOOK’s 585 back in back in 2005, and loved the light, responsive carbon racer. It’s been a popular bike in the line-up, and is back for 2008 with an emvolution that include two new versions.

The 585 Optimum features redesigned geometry with a taller head tube and a shorter top tube (for riders who like an easier-to-reach bar position or running fewer spacers), but still want a well-balanced ride and crisp handling.

The 585 ELLE is essentially the same geometry, but with a the of light blue graphics to appeal to female riders.

BIG NEWS – NEW BIKE!
LOOK made a big splash last year at Le Tour de France when they unveiled their 595 racer under Thor Hushovd, Pietro Caucchioli, and PEZ-Man James Hewitt. Featuring LOOK’s snazzy integrated E-Post, it went on to win more than a few stages of big (and small) races.

And even though the 595 remains the pro team race bike, LOOK introduced the all new all carbon 586 for 2008. Here’s the first look… 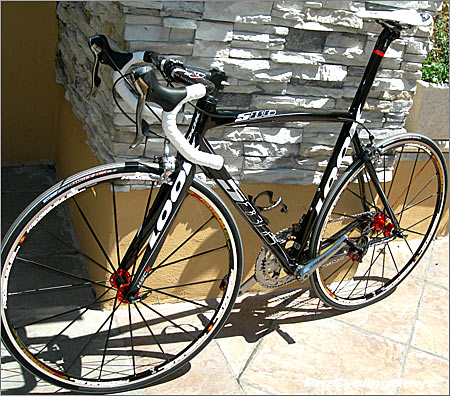 Unlike the 595, the 586 is a “monobloc” constructed carbon frame – the main tubes and joints are formed as a single unit in molds without using lugs. The result is a frameset weighing 940grams (it’s lighter than the 595) for the small size with an uncut seattube. Geometry for the sizes offered is virtually the same as the 595, but the ride is designed to be slightly more comfortable. I did ride it for about an hour, but you’ll have to wait till I get more time on it for the full PEZ-Report. 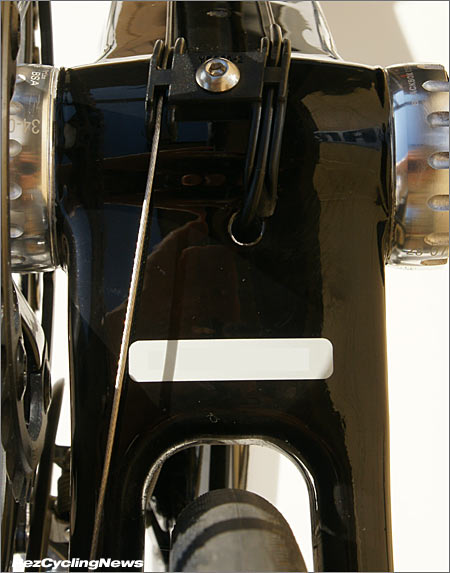 Taking what they showed us so convincingly on the 595, the 586 also uses some smartly designed tube shapes to provide strength and stiffness while reducing the amount of carbon needed to do it. It’s plain to see the wide tubes anchoring the bottom bracket. The down tube flares to almost full bb-width, and the chain stays are almost full bb-height, providing big stability where the drive train needs it. 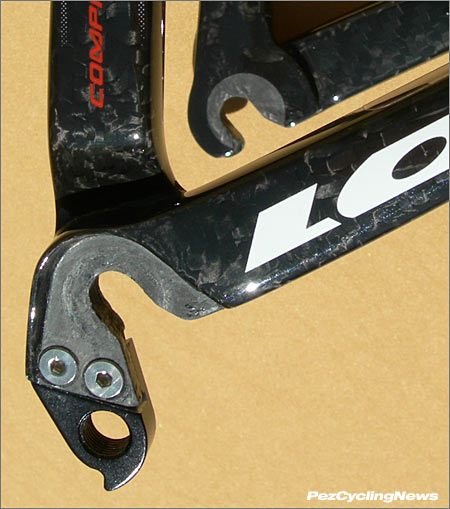 The rear dropouts are super-hard carbon, molded in unison with the rear stays, but done at much higher pressure to make ‘em hard enough to hold your wheel. They’re a tad lighter than alu-drops too. The bolt-on alu derailleur hangar is replaceable. 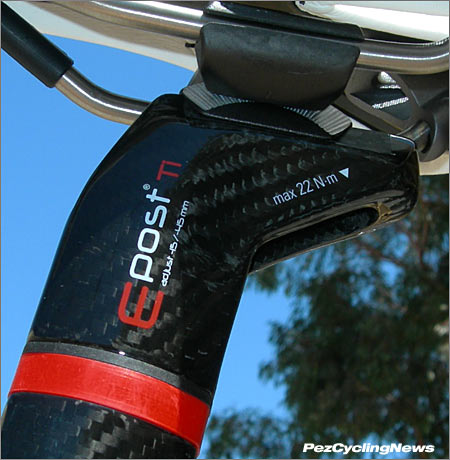 LOOK’s signature E-Post gets an update for ’08 with a Titanium bolt, plus a redesigned elastometer that is built in to the seatpost (but changeable) and eliminates the need to run multiple elastometer rings to dial your desired ‘comfort’. Plus it offers 3cm of vertical adjustability, which would be handy should you ever decide to sell the bike…

The sleek integrated seatpost comes with 3 densities of elastometers – gray, red, and black, and although not the lightest seatpost around, it remains a viable design, offers huge for/aft adjustment and is even reversible. Tri-guys will love the new reversible E Post R32 with it’s +/- 32mm of for/aft adjustment, which also features a side-pull single bolt adjuster – which also comes on the new R5 model for folks who prefer very little setback, or lots of downward tilt. 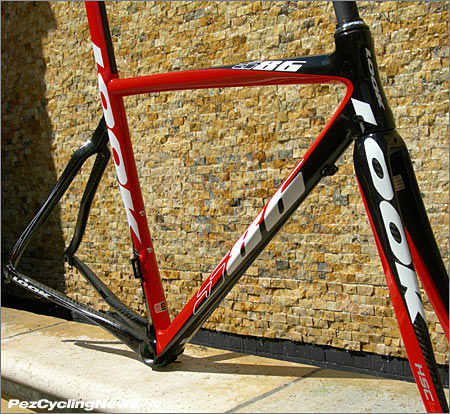 As usual, the LOOK designers have found a way to make the branding look even bigger than the tubes. The 586 frame comes in two colors – red & black here, or all-black. The slightly curved top tube is designed to aid in smoothing out the ride. The fork is LOOK’s HSC6, all-carbon design, which also meets the new safety standard for frontal impact requirement of 144 joules. This new international standard will hit the bike market in 2008, and is designed to make your ride safer. 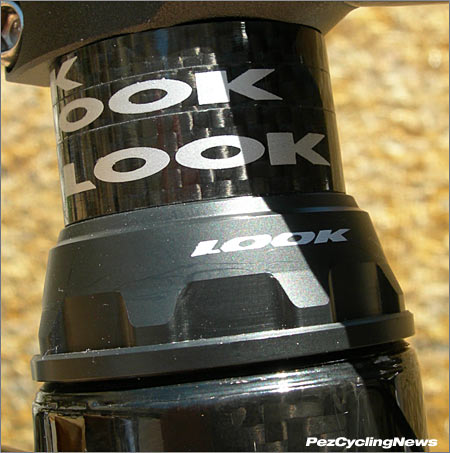 Also new on the 586 is the Look HEAD FIT System, which threads onto a special insert and attaches the forks to the frame independently of the handlebar stem, allowing riders to change bars without affecting the headset tensions or adjustment. The head tube of course features LOOK’s standard issue 1-1/8 inch top, and 1-1/4 inch bottom bearings to create a very stable and precisely steering font end. 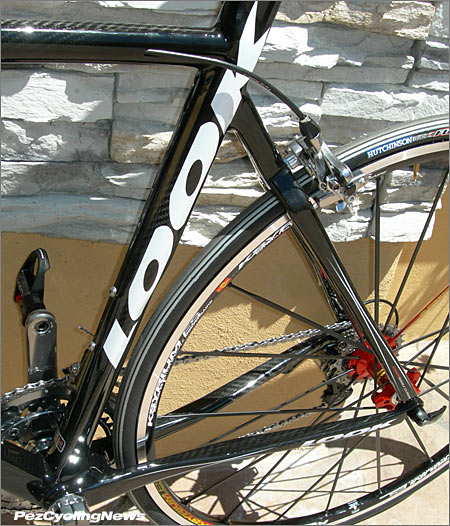 Tube shaping is plain to see on the rear triangle – both seat-and chain-stays feature tubes of varying widths and shapes to maximize drivetrain efficiency without sacrificing ride comfort. The flatter vertical plane aids in smoothing the ride, while the wider horizontal plane keeps the frame from twisting under pedaling force. 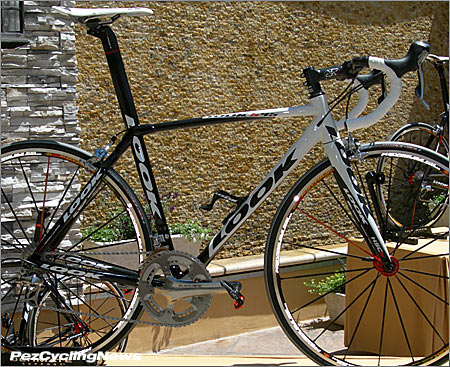 Why mess with a good thing? Both models of the ProTour proven 595 are back for 2008: the 595 Origin and stiffer 595 Ultra get updated paint schemes in LOOK’s signature black and white motifs (an all-black and black-red versions are also offered). Read the 2007 model 595 ORIGIN PEZ-Test here. 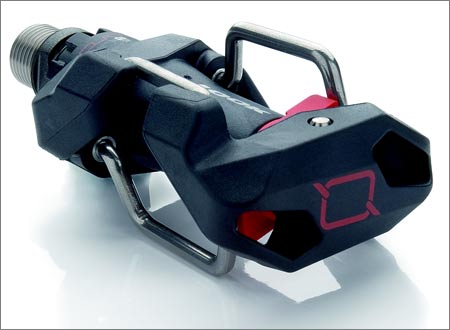 From the guys who started the clipless pedal revolution some 20 years ago comes an all new design for the off-roadies, and is worth a look – considering how many of us ride both road and mountain. This top line model is made from injection-moulded carbon, weighing only 99 grams (per pedal) and has a very wide platform. The spindle is titanium, and mud release is said to be superb, with lots of internal clearance to avoid dirt clogs. 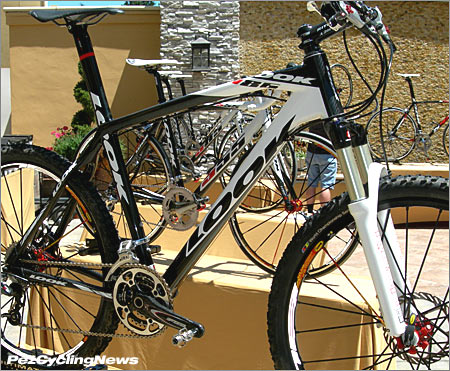 We may be road racers at heart, but I got my own reintroduction to two wheels via mountain bikes back in the 80’s – I do love an epic X-country adventure… LOOK’s new 986 all carbon hardtail was eye-catching to say the least – it’s LOOK through and through with their integrated R5 seatpost, and even sported their all new Quartz Carbon pedals (NOT seen here).

Watch the LOOK website for more news on the 2008 line.