Name a frame builder with employees that have been with them for 40+ years… That list is even smaller when you add that the company is in the USA and is not producing frames in Asia. Lynskey Performance is uncommon.

I’ve been to lots of companies in the bike business and the one constant is that this meat grinder that is the cycling business would mean that if I were to revisit a company with more than 15 employees today that I had seen 10 years ago, VERY few (if any) people would still be there. But I walk into the shop at Lynskey and I see one person after another, after another that I recognize from my trip to their place in 2007.

Most people reading PezCyclingNews know a bit of the Lynskey story. It’s common knowledge that the Lynskey’s founded Litespeed and that the company was sold to a large investment firm, but it was still basically the family business after the sale, with Mark Lynskey staying on to run Litespeed.

It was a bit of scheming from their mother Ruby that brought brothers Mark and David Lynskey back together after Mark decided it was time to leave Litespeed. And it is the core of Litespeed that formed Lynskey Performance. 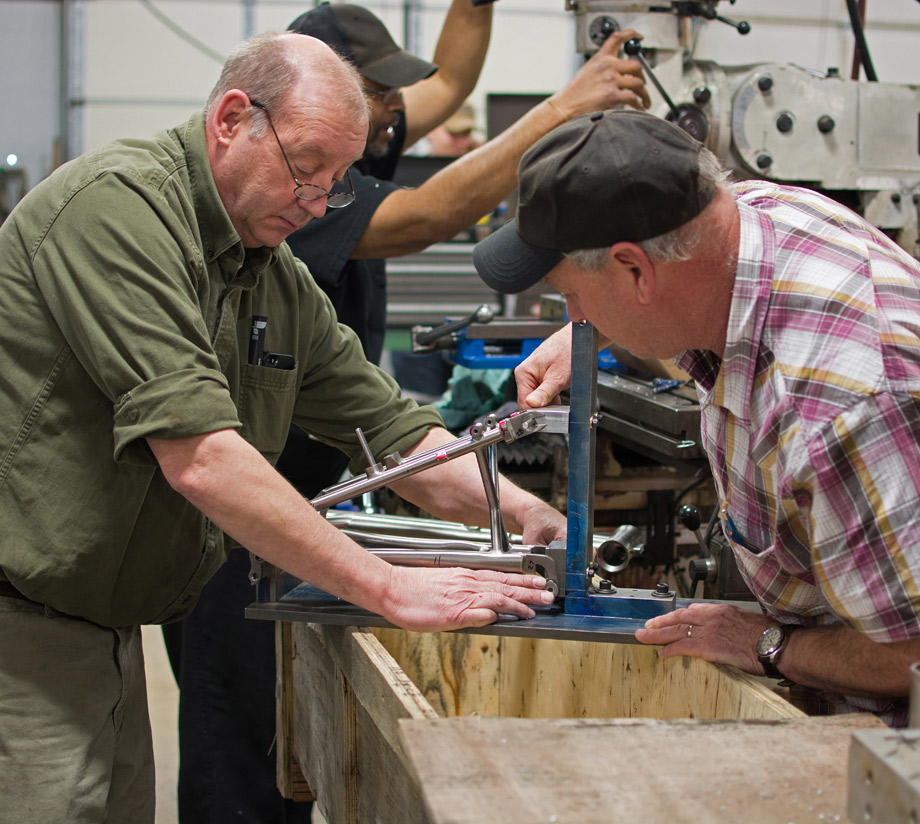 While you might know the Litespeed / Lynskey transition, most don’t know that working with exotic metals and building things is a multigenerational Lynskey family tradition that started with a company called Southeast Associated Machine. 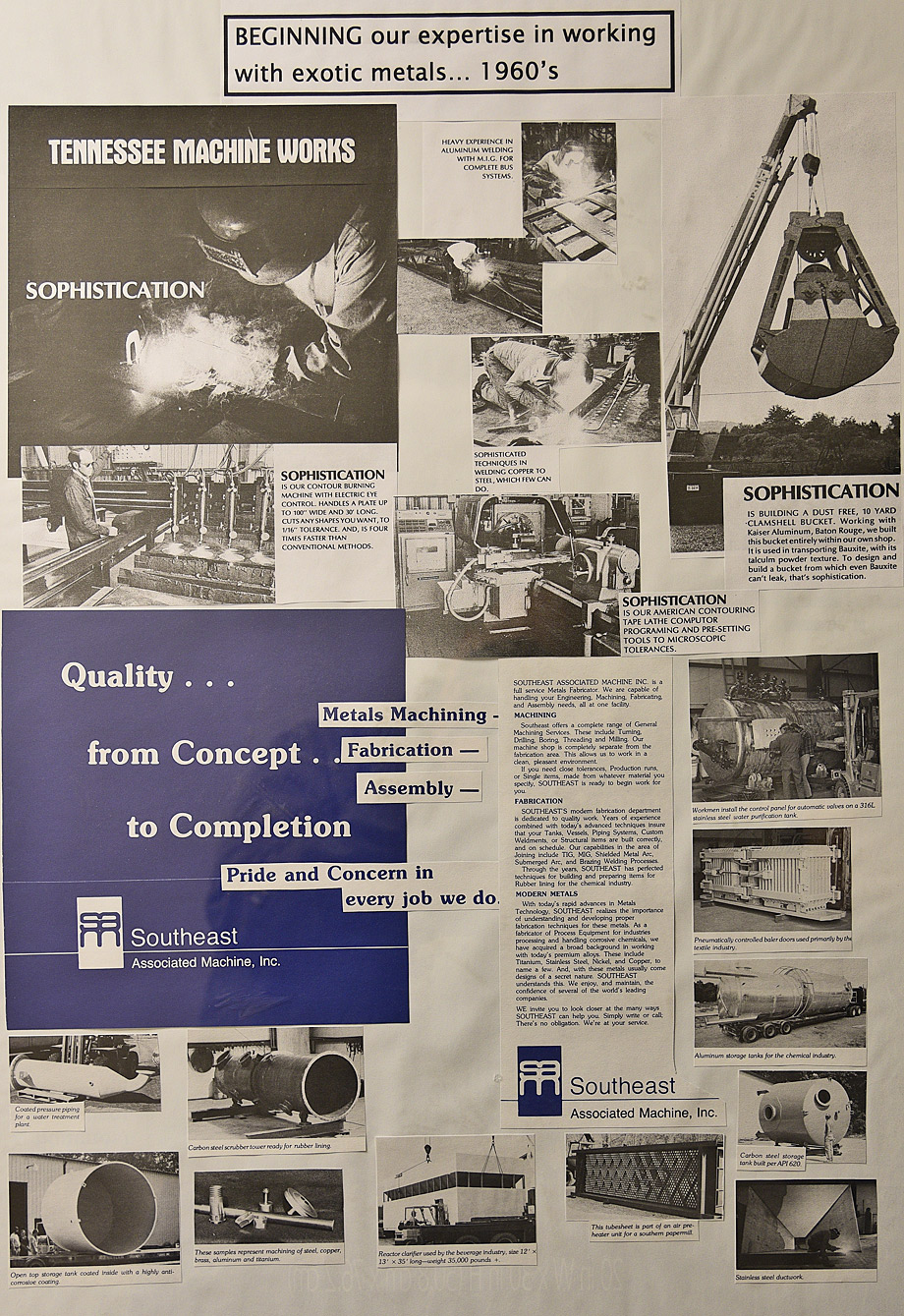 This is where the Lynskey family started and where David and Mark cut their teeth on metal. Their father ran S.A.M. and from a pretty early age, both brothers’ heads were into making things… Enough so that the Sisters of Charity School in Chattanooga requested that Mark write his parents to let them know that while the other kids were working on their math, a young Mark’s head was past the basic arithmetic and already on to industrial design. 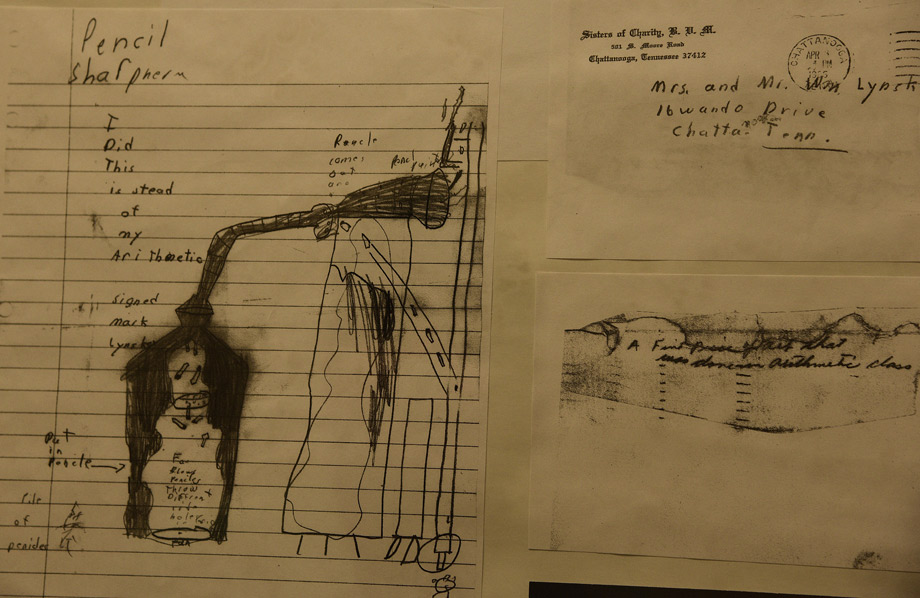 With metal fabrication seemingly the foundation code for Lynskey DNA, it was brother David that brought cycling to the family as he was a competitive runner, but with repetitive runner’s knees. Injuries lead him to competitive cycling and the logical thing happens when a competitive cyclist is working at a machining and fabrication shop. It occurred to David that the titanium they were using could be stronger & stiffer by weight than the steel being used, so they built him a bike from this crazy new metal. That led to other frames for him and friends and it wasn’t long before the properties of Ti started getting the recognition it deserved on a much larger scale.

That was in the mid 80’s and shortly thereafter bikes were a concentration enough that Southeastern Associated added a wing to the facility and a new tenant called “Litespeed”.

That the brothers and their mom are all still a part of the business is odd enough, but there are three generations at Lynskey now… I‘ve counted as many as 10 family members.

Employment in Cycling should be measured in Dog Years.
This business chews up and spits out people and whole companies left right and center. And with that, the Lynskey family’s durability and employment retention are mind boggling.

Hell, you have nearly a century of experience with just two employees.

Louis’ last name isn’t Lynskey, but he started with the Lynskeys more than 40 years ago as a part of Southeast Associated Machine. 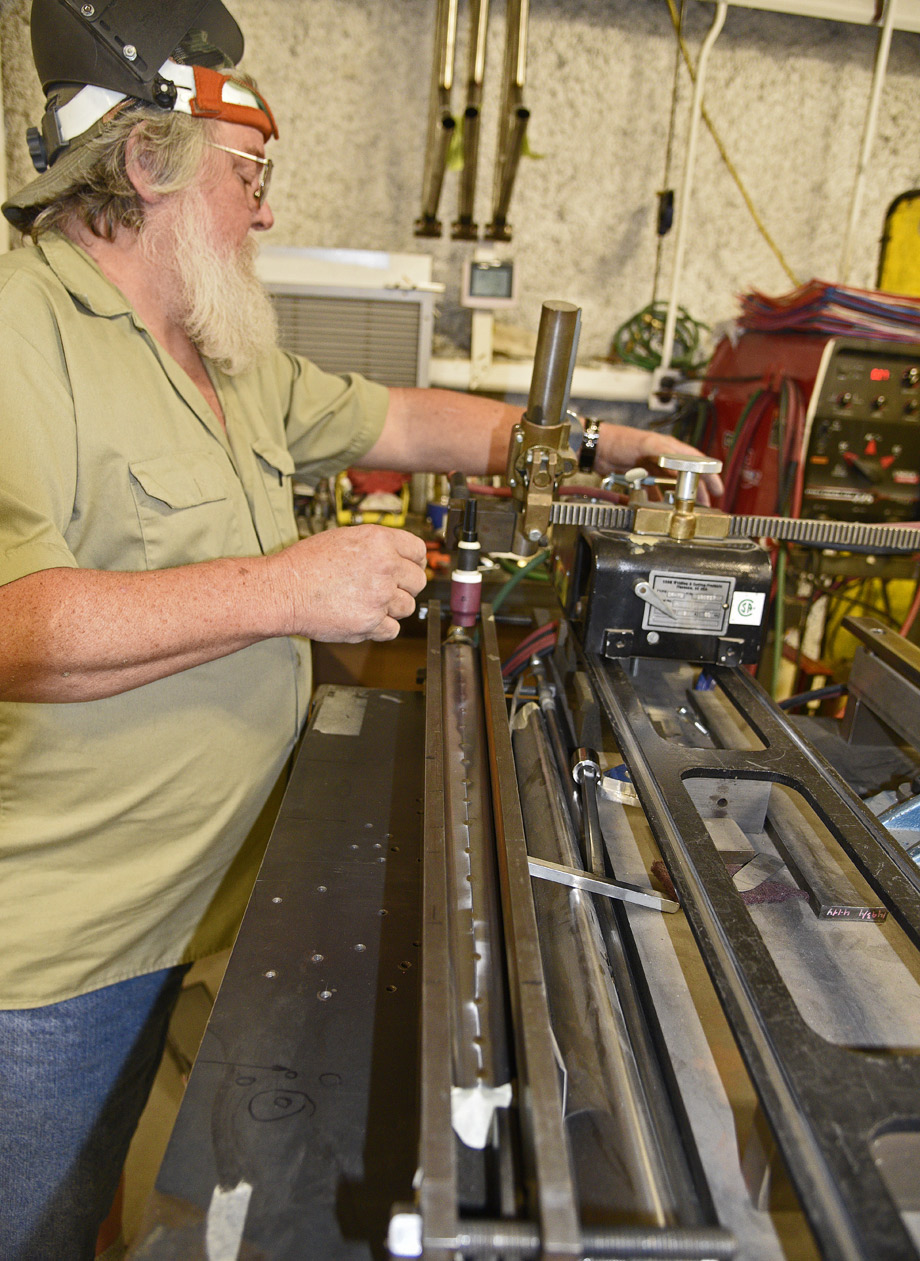 There are few things Louis can’t handle in production but today’s duty was in seam welding 6-4 Titanium (6-4 typically starts life as a sheet of material). 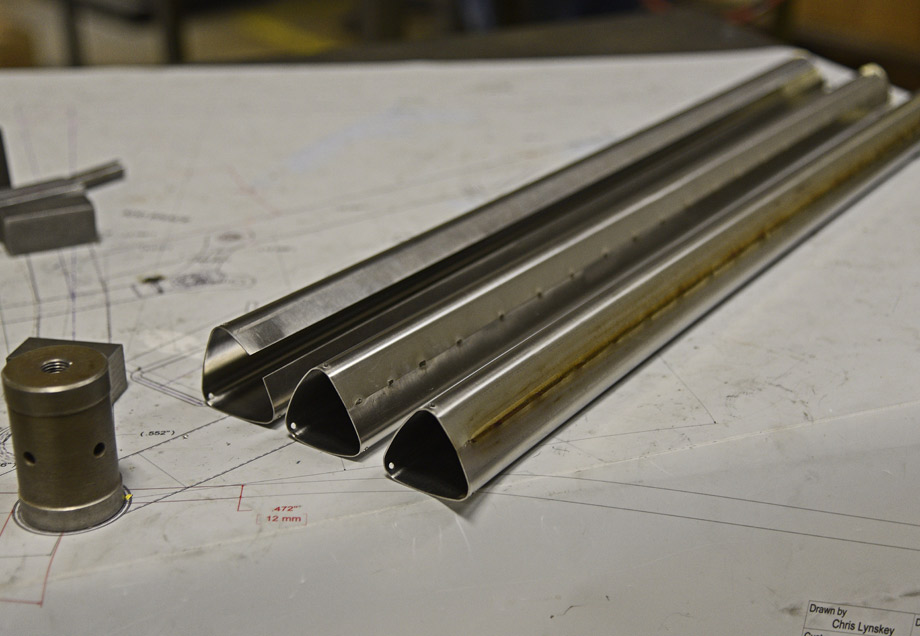 It will get formed into various shapes (in this case a triangular top tube). Then it gets tack welded and finally a full seam weld. 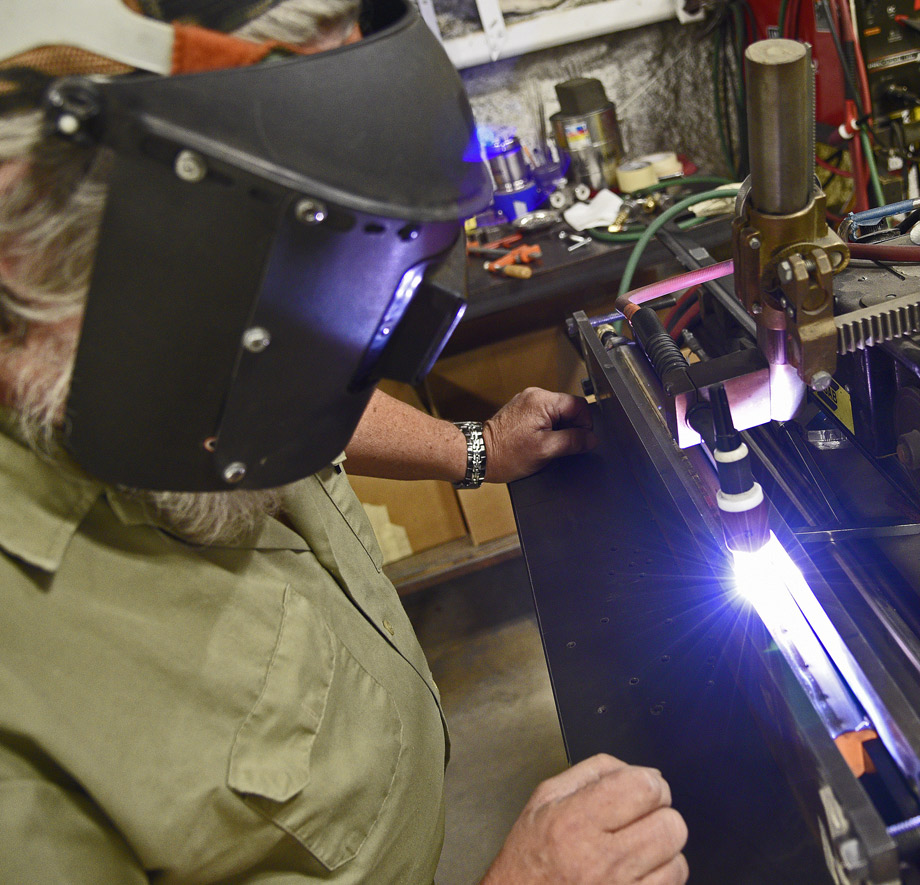 The 2nd nearly half-centenarian on the floor is Mother Ruby Lynskey’s brother Bill. 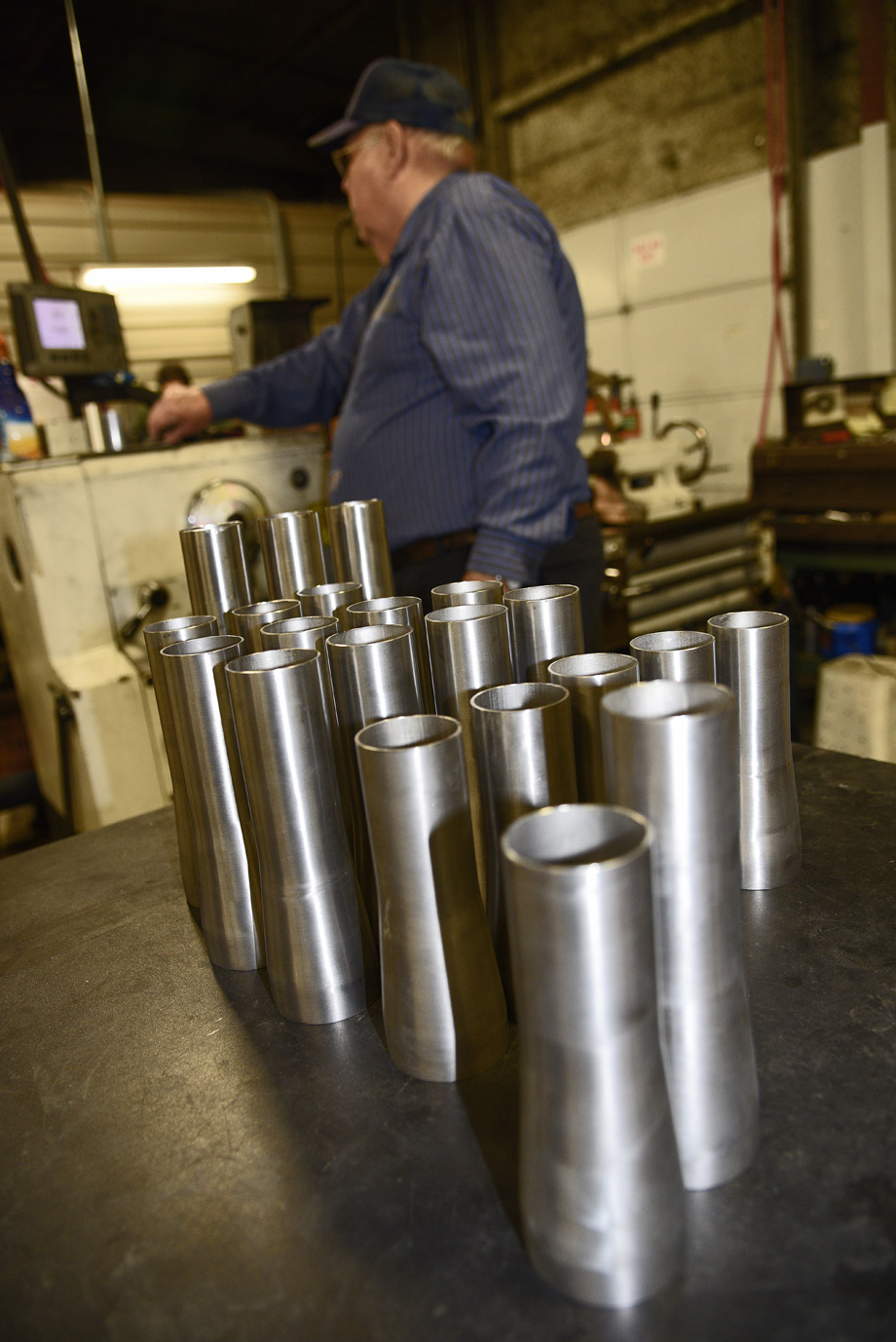 Bill can also do virtually all of the fabrication functions in the shop including forming the head tubes for today’s run. 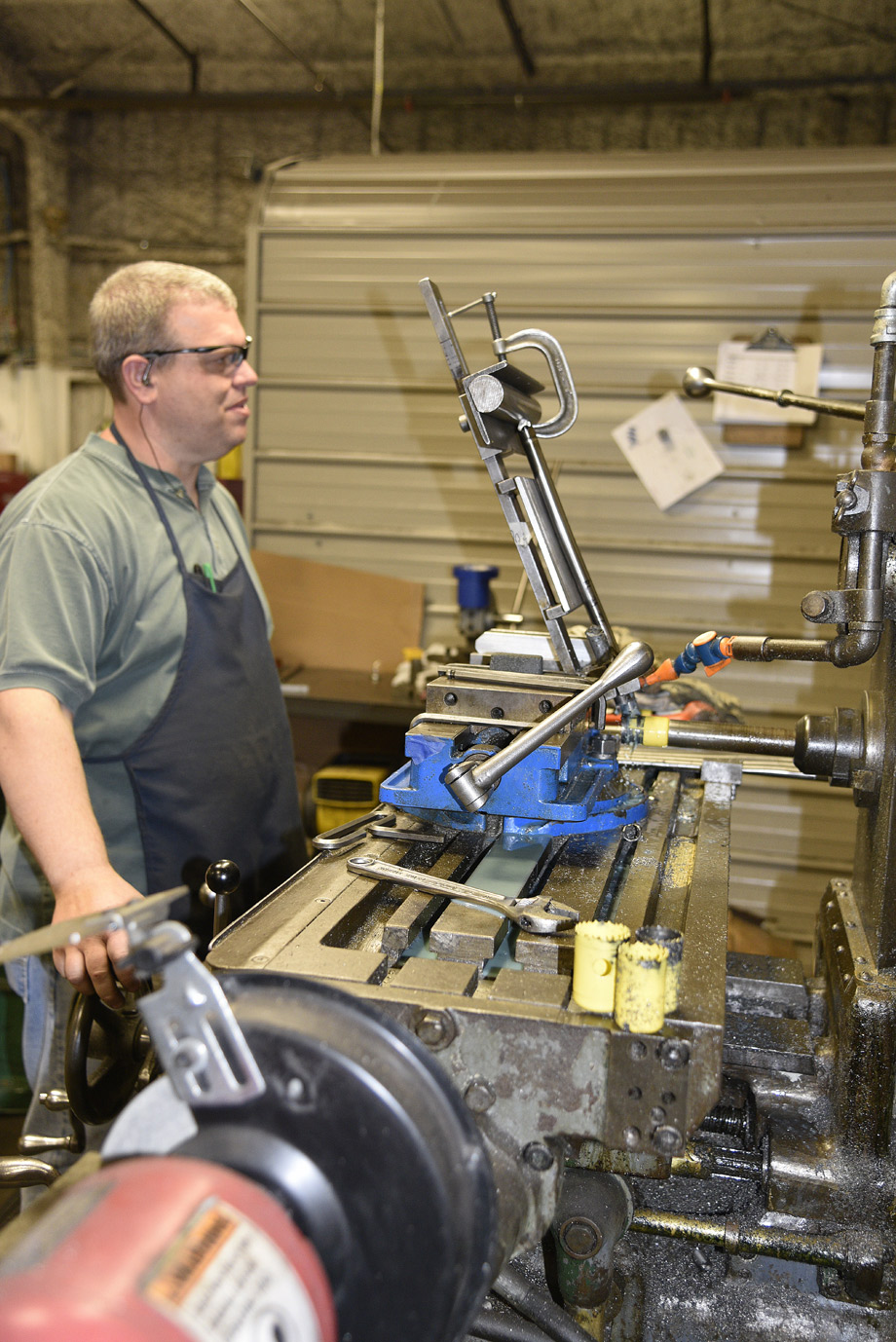 Eric was standing at the same machine I saw him at several years ago when the Lynskeys were foolish enough to actually let me touch the machines while building a project bike. 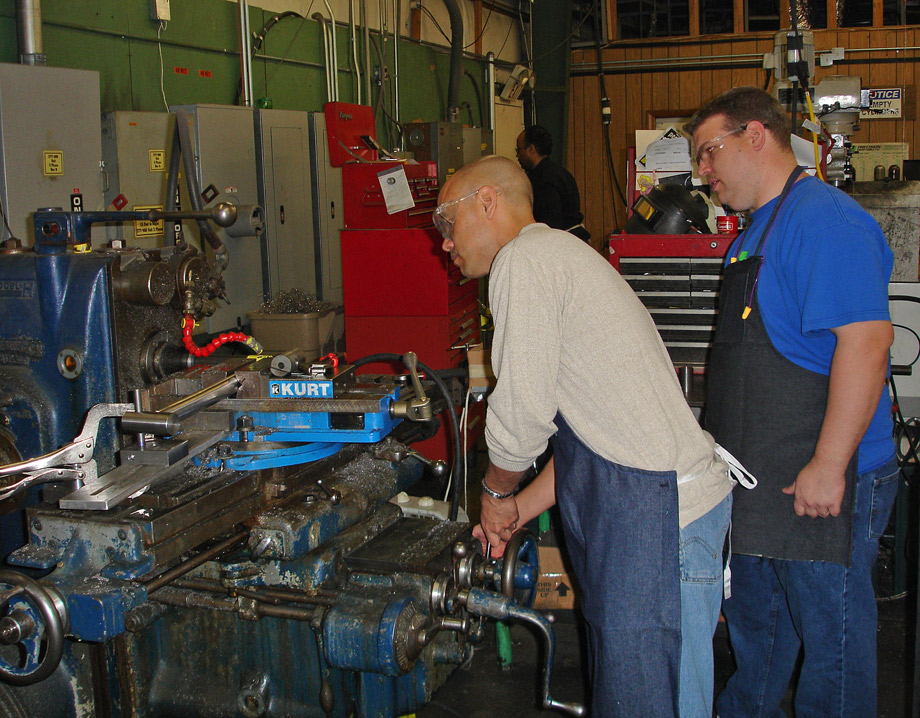 Not much has changed in the last 9 years except I now have more hair and none of it is on my head.

Despite being periodically exposed to goofs like me, Eric’s been building Ti bikes with the Lynskeys for almost 30 years.

Ah, the guy in the background (near my head in the picture above) was there during my latest visit too, but he’s just a rookie… 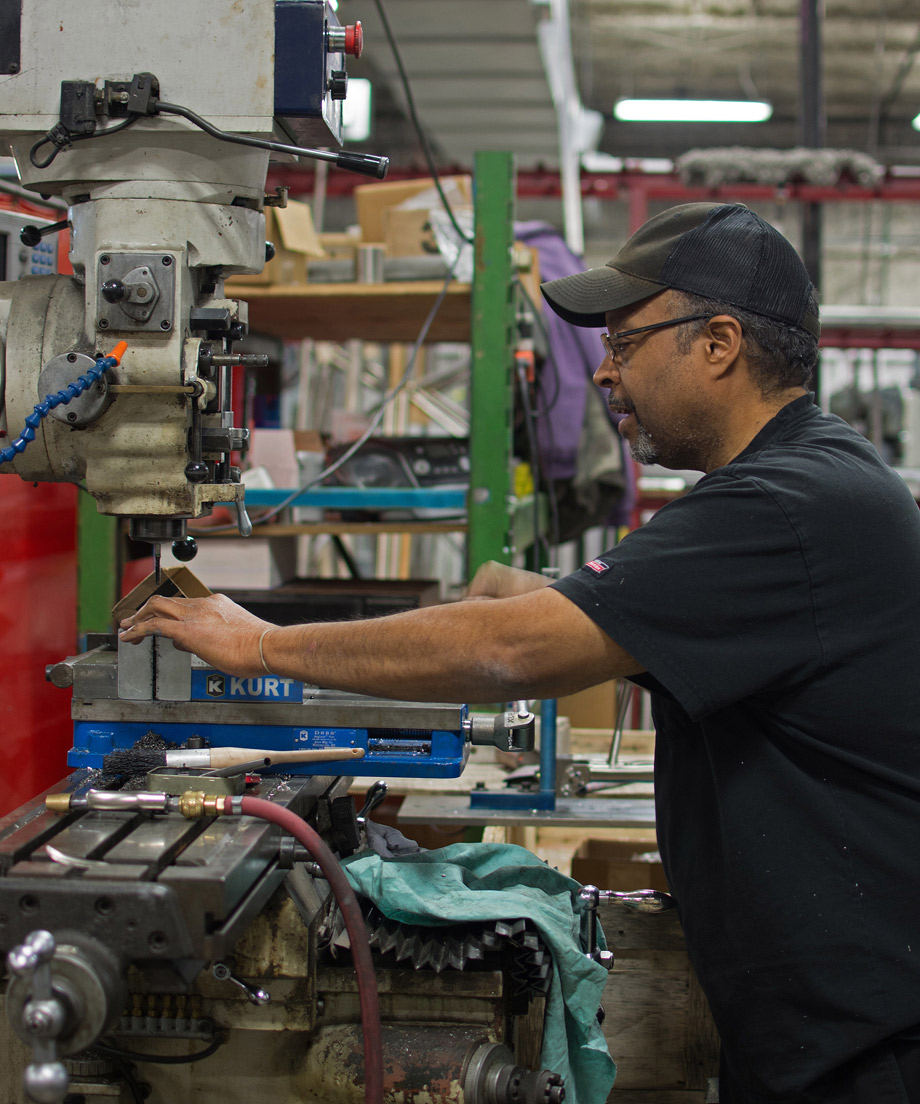 Boyer has only been handling the machining and tool building with the Lynskeys for a decade. 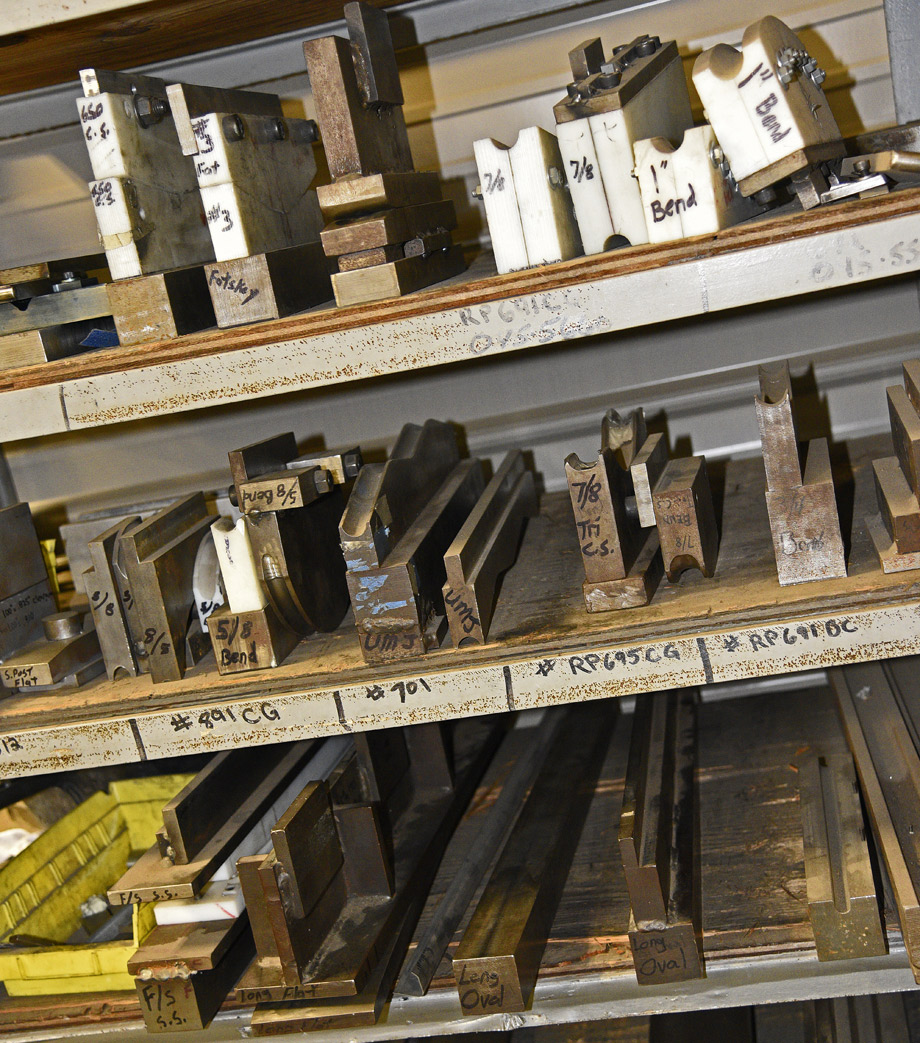 This shop makes most all of its forms for shaping the tube sets, including the presses and structures that hold the forms. That is no easy thing given the substantial amount of tubing manipulation Lynskey does.

A few feet away from Boyer though and you’re looking at Millard who’s been with the Lynskeys for 25+ years and can run several production phases. 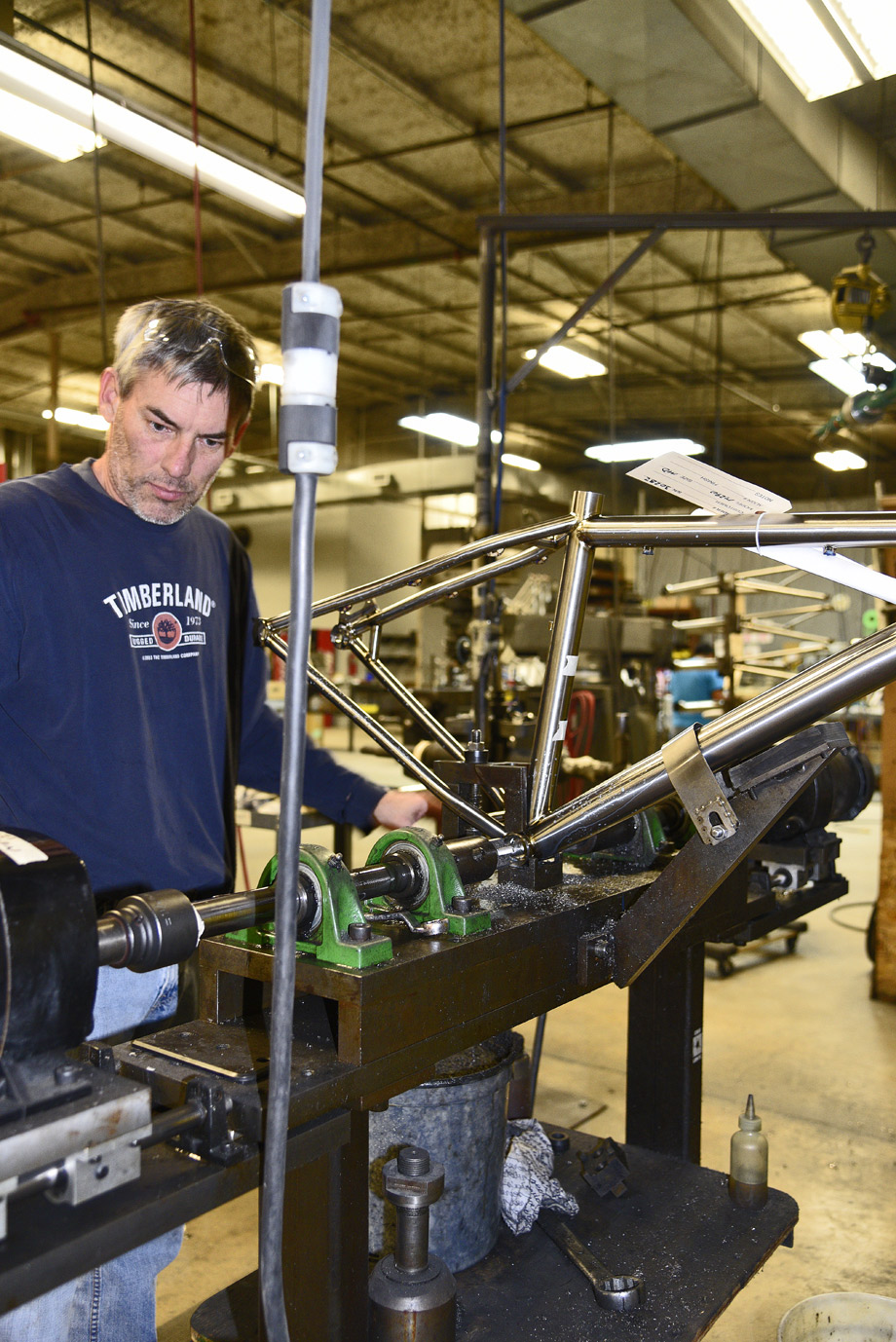 Today’s task is cutting the threads for the bottom bracket, which needs to be done after all of the welding is complete because the heat from welding can distort the threads… 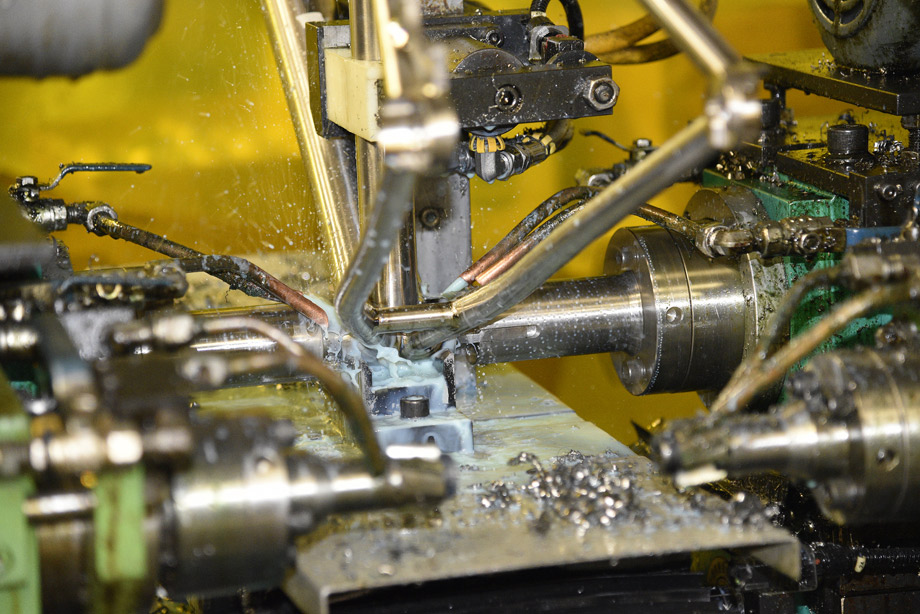 And speaking of welding, Toni Lynskey has been welding Ti bikes for 23 years. 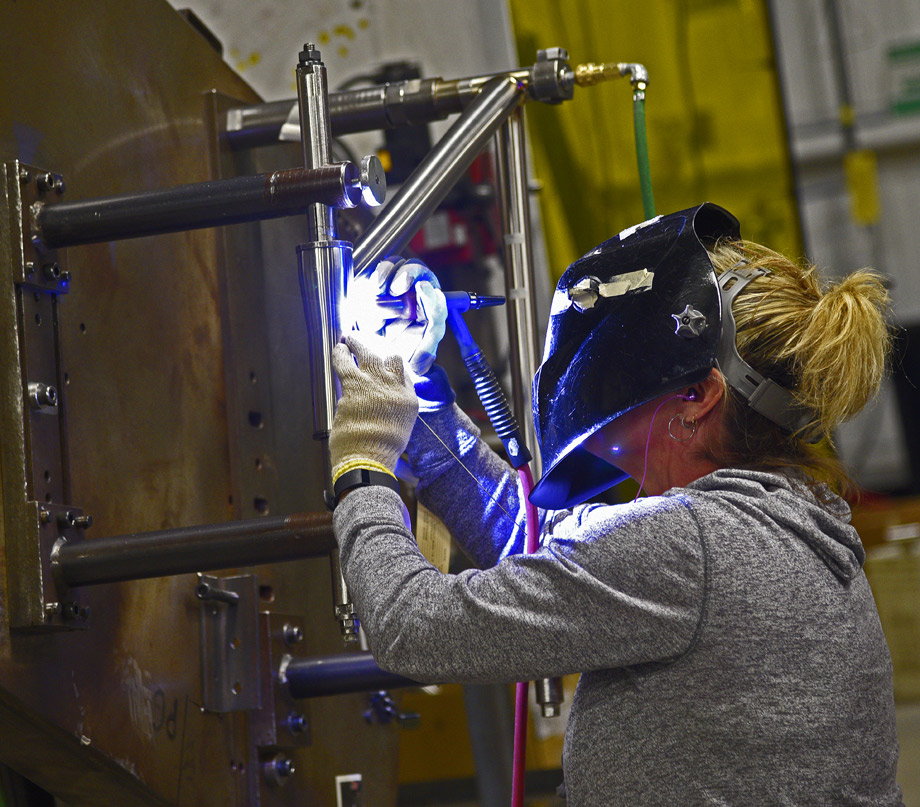 Her station is next to Red, who’s “only” been at it for 15 years with the Lynskeys. 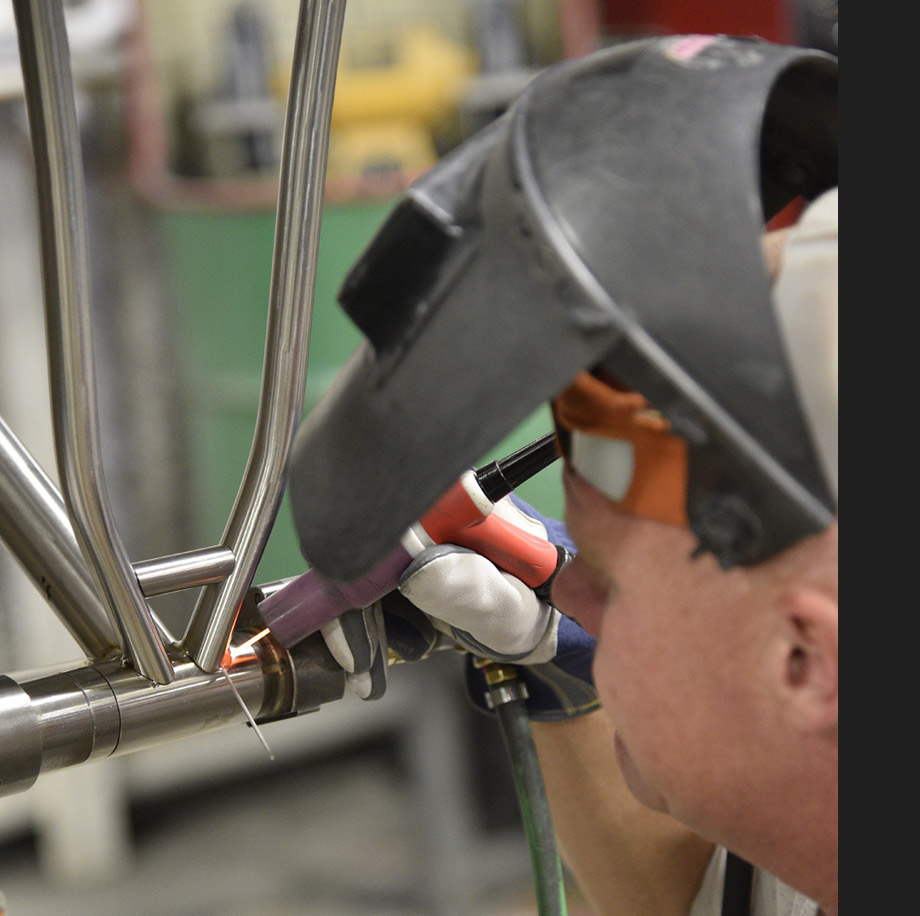 Running the alignment table and handling frame prep is another 15 year guy Gary. 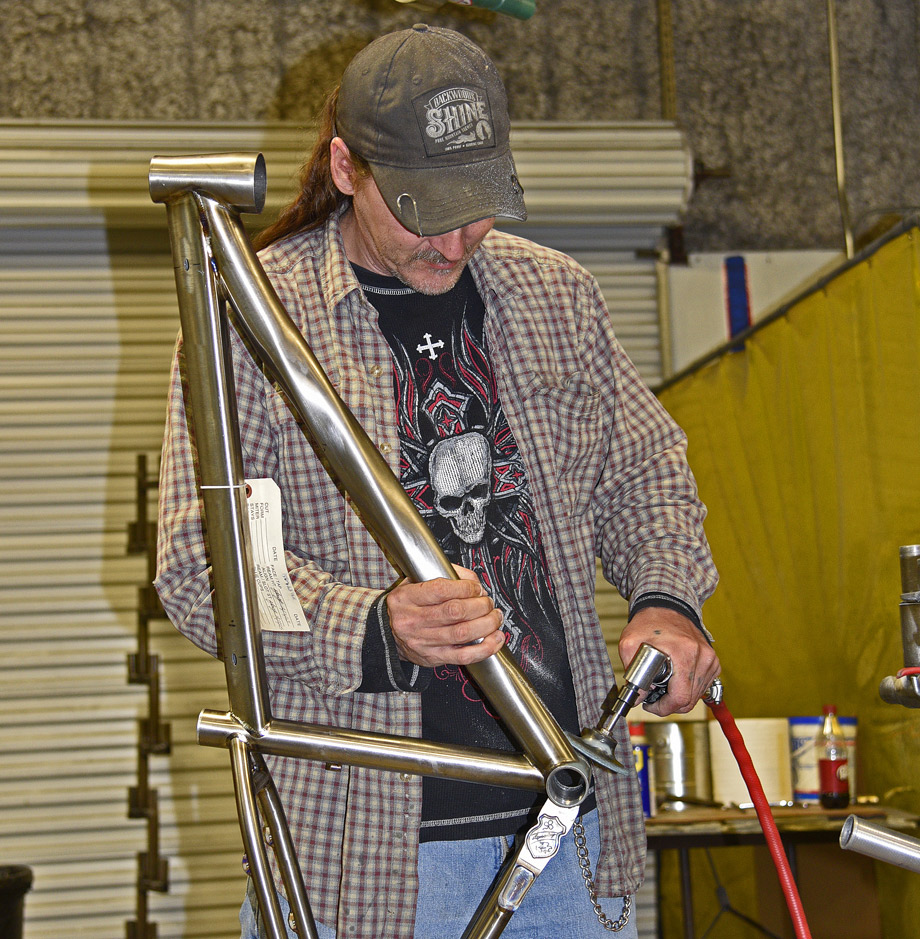 This kind of endurance is not only a testament to managing a company, it speaks to the product they’re making as well. 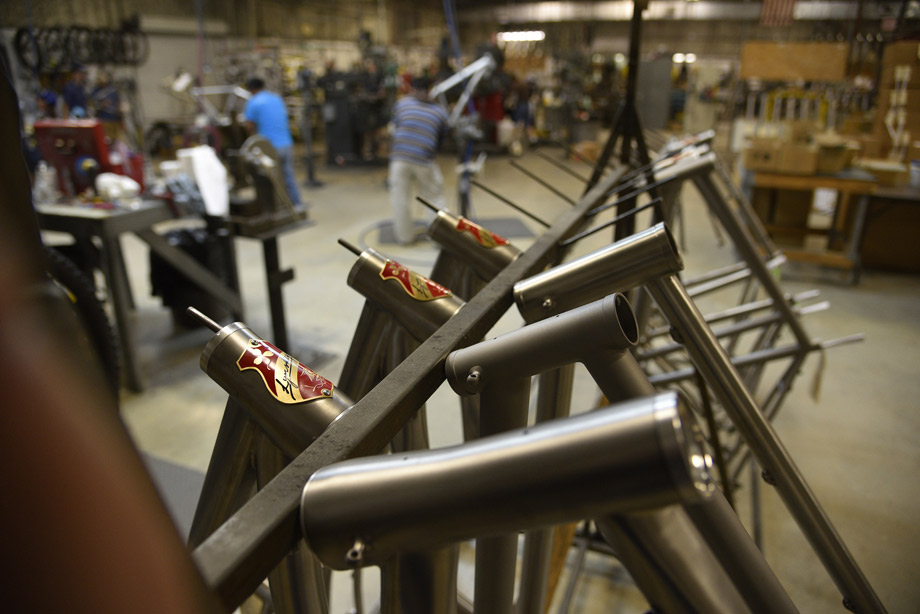 Lynskey are still all about Titanium, but they’re also constantly tweaking things. 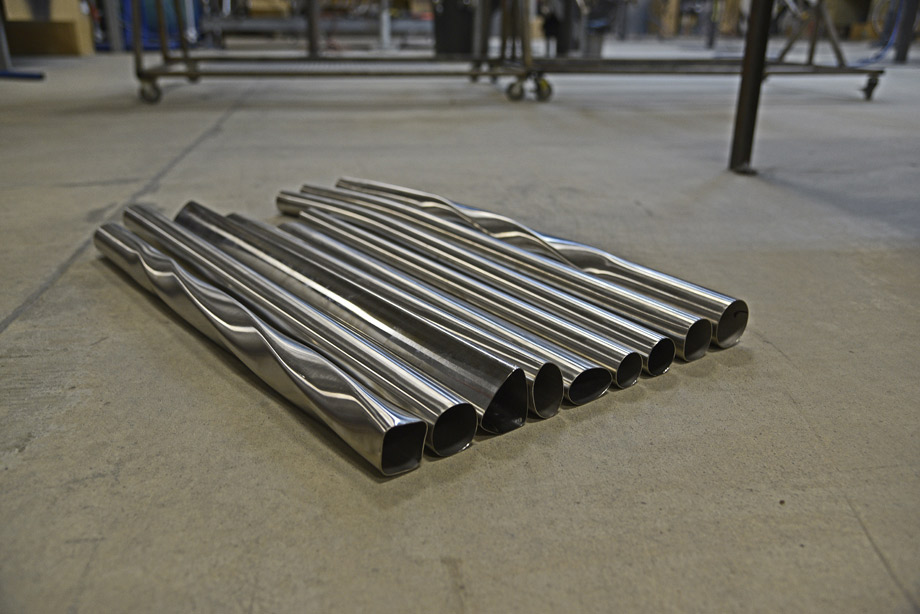 The production line might appear a little chaotic at first, but if you’ve been to a few mid high volume builders in the past, what you would notice more than anything is the attitude and the calm despite several custom requests being relatively seamlessly worked into the lineup. 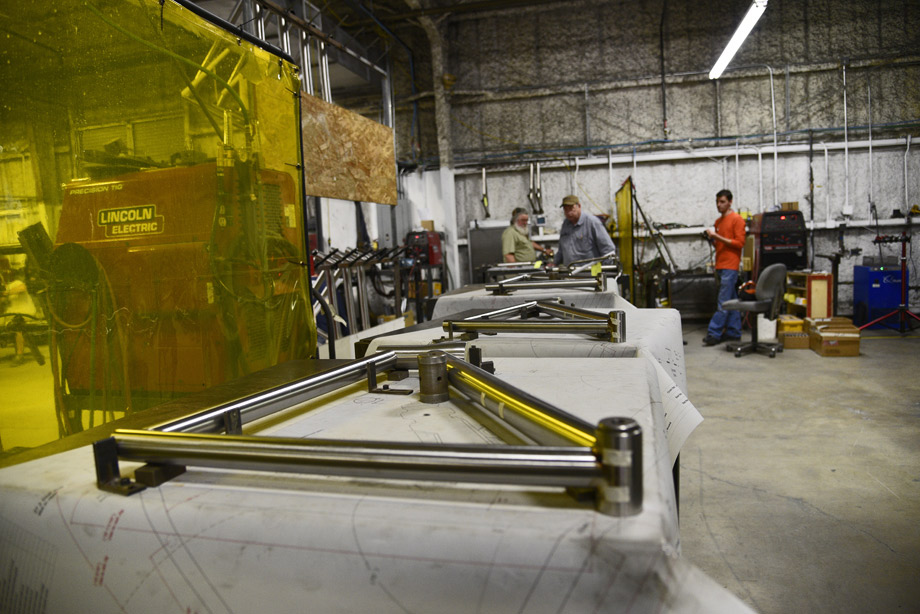 The custom aspect is the kind of thing that would have a lot of manufacturers grinding to a halt during a stock size run. But there is very little fuss on the floor at Lynskey despite what I counted as a half dozen custom rigs mixed in with a stock run happening that day. 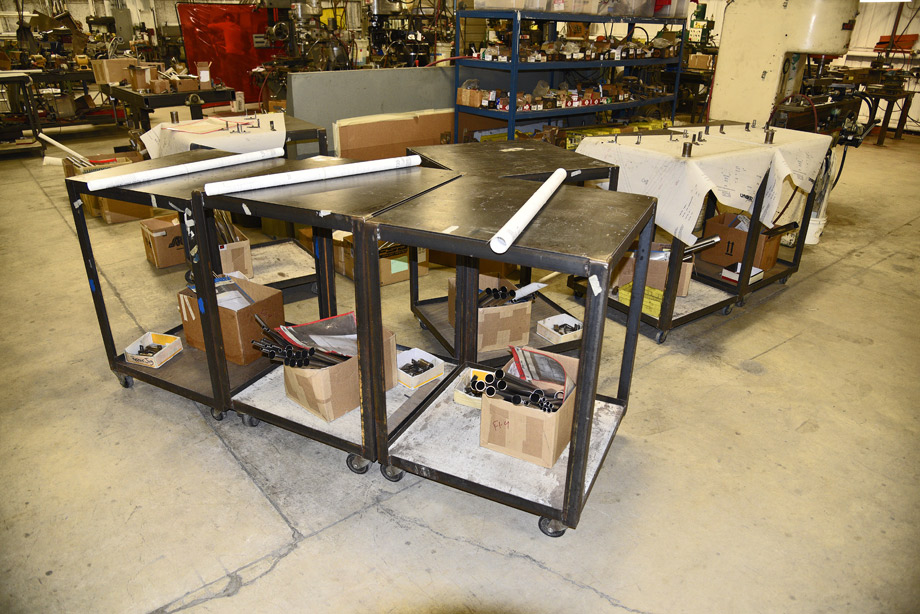 Rather than complaining and running around, everyone was simply focused on what ever was in front of them and they seemed to not mind when something snuck in from the side… If there’s a small sized bike that requires 3 tubes to overlap in an area (most joints are 2 tubes coming together), it’s called out, cutting machines are quickly adjusted and sometimes the cutting needs to be handled by hand rather than machine to make it work out. 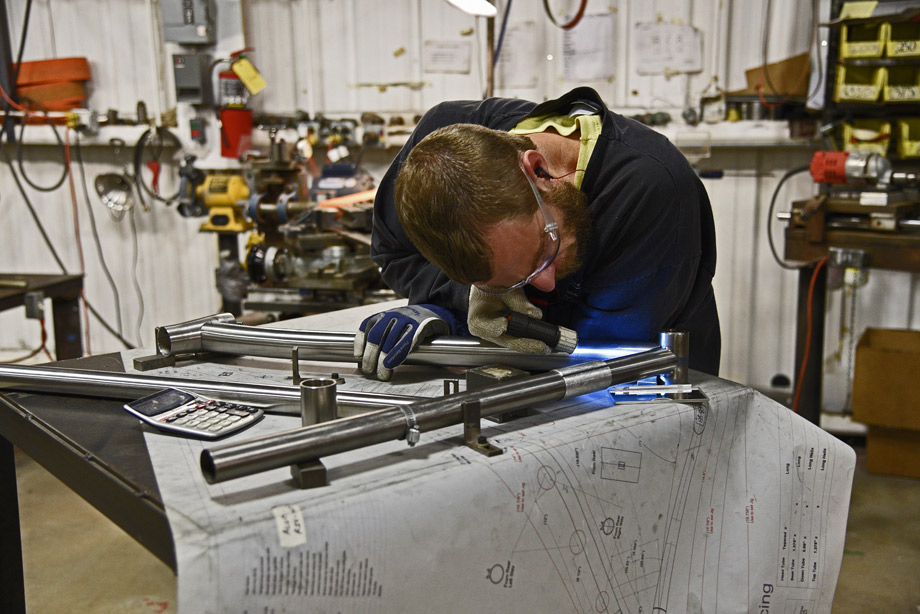 That’s Damon checking the BB, but the head tube here is so short that there’s no room for a down tube and a top tube to remain separate and getting all three together when there’s only space for two requires a little love… 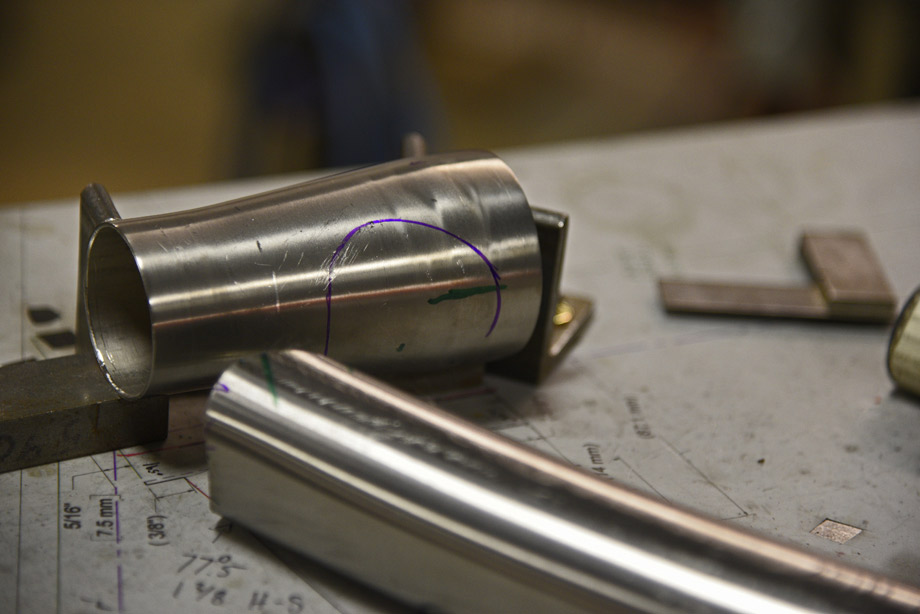 As everything is moving through the build phases, these little twists are handled in stride.

This all works very well when a group of people have been together long enough so that they know one another’s jobs. Each person knows the others job well enough to put something together not just to complete their own individual task, but to make the next person’s job easier as well. 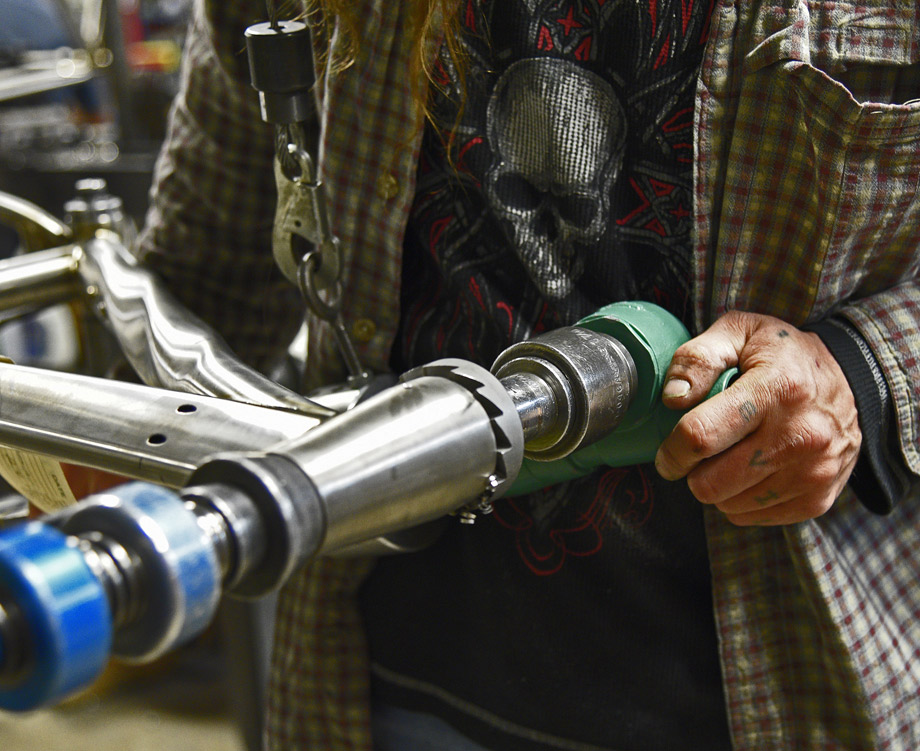 The result of this ability to work together shows in the quality of the product you get as a customer. Every frame passing through the shop is handled at the quality level of the bespoke custom work and because the process rolls this smoothly, your custom order lead times remain relatively quick.

All of the finishing work is handled with the same care regardless of model or material. 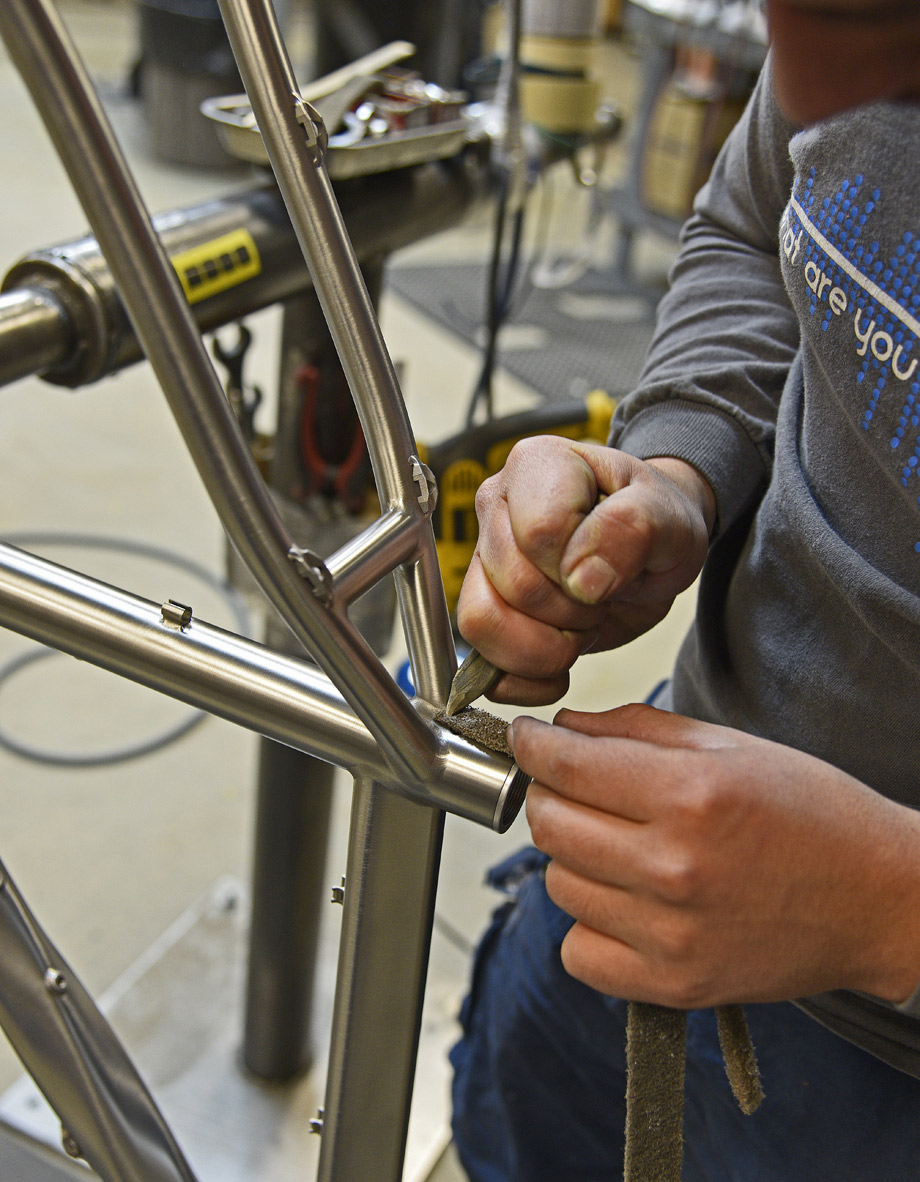 Attention to detail and Quality Control happens at multiple steps for every frame. 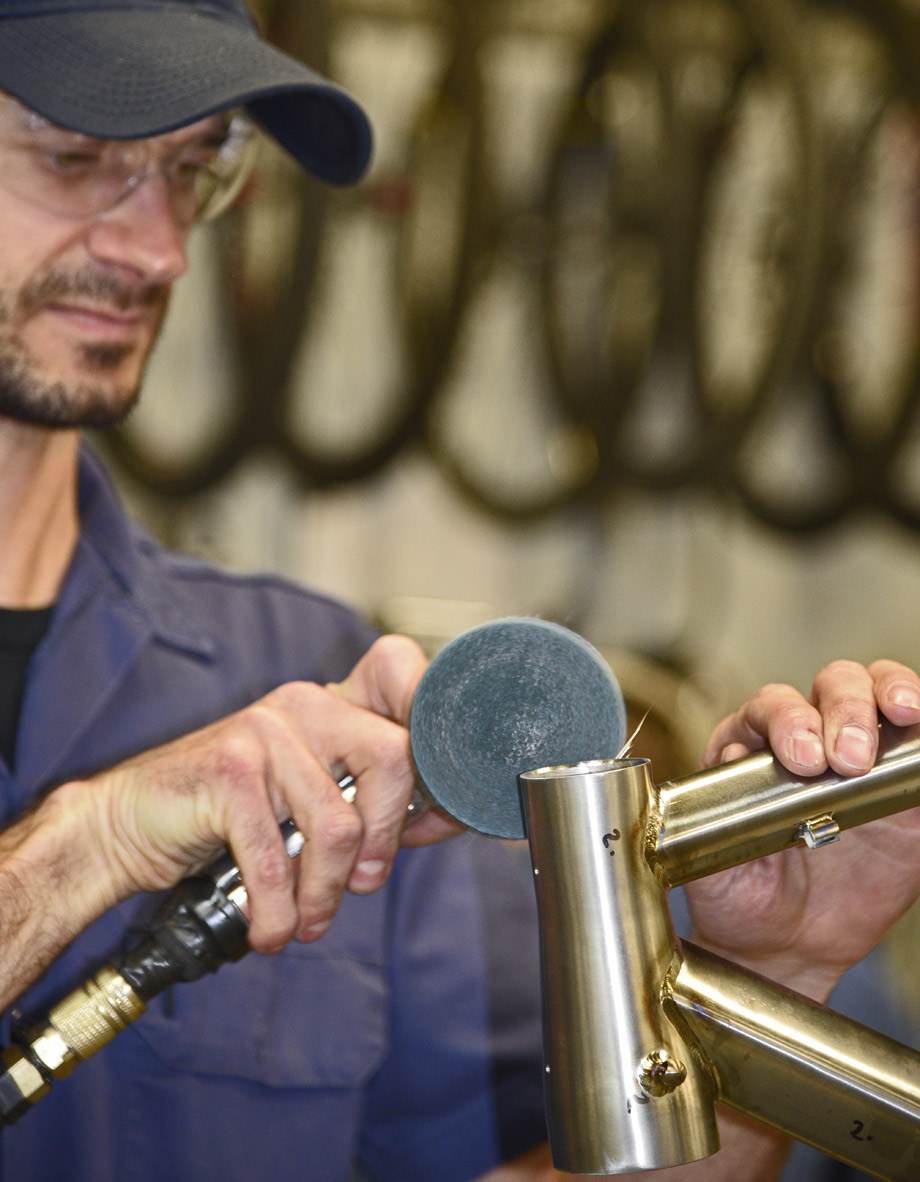 Corbin is the QC man on the floor

Lynskey have always offered a broad and changing set of finishing options. 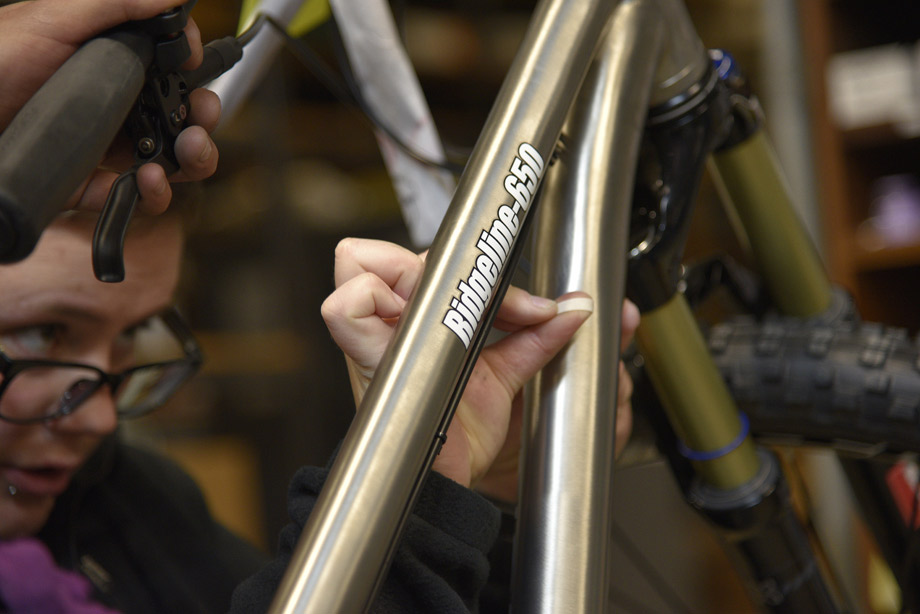 This ranges from standard finishes and logos… 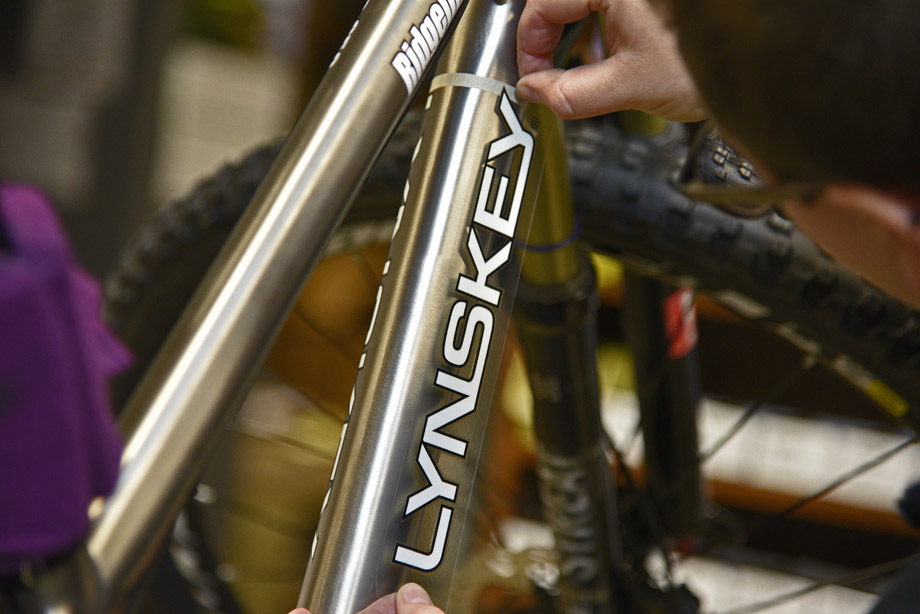 … to a multitude of paints and a new twist of raised, riveted logos. This one is in aged copper. 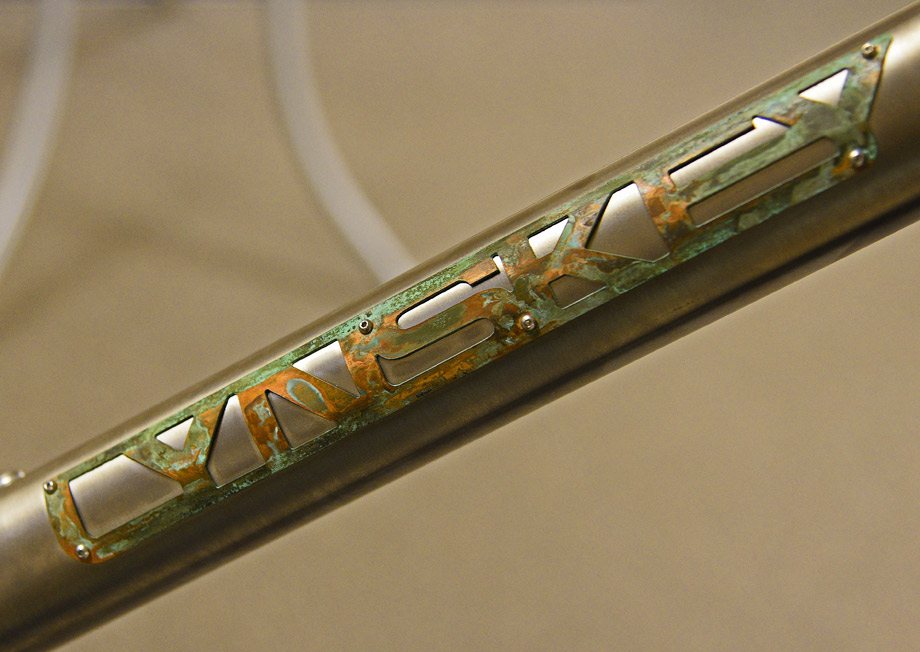 Sometime down the road here, you’ll get a look at Lynskey’s newest model. The design is being finished up and it was a fun conversation in the Lynskey shop between myself, Lynskey (and their in-house Geek and QC guy Corbin) and JOM at GravelCyclist.com that might become Lynskey’s version of a Gravel Road bike.

Bikes aside, I couldn’t help but write about what I saw as exceptional with this group of people in the hopes that you might find some appreciation for the “Lynskey Family”.

While there’s no shortage of people actually named “Lynskey” here, there is a much broader group that qualifies as “Family”. What that extended Family is making and the history and accomplishments they share are a small miracle in this industry. 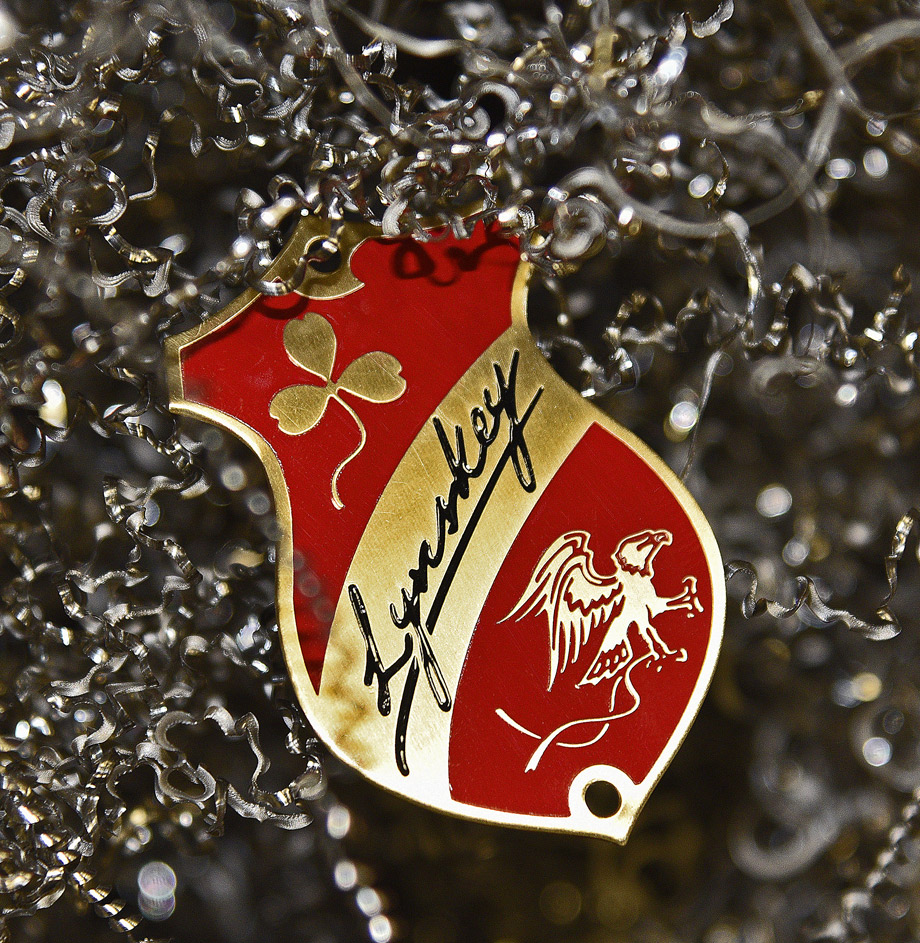 Most folks don’t realize that the Lynskey Family have won a world road championship (I confirmed this with the company whose brand was on the paint…), grand tour stages and stomped around all of the pro tour classics. But far more significantly, Lynskey’s extended family are still together and building new things.

Despite all of the racing pedigree, I think the Lynskeys have always been a lot more concerned with what they could make for the people trusting them with their money rather than getting wrapped up in all of the hoopla associated with giving bikes away for Pro-tour publicity. Still, the high level race success is worth mention as lots of companies would be killing themselves to have this background and be able to market the story and history. But the family’s depth and accomplishment escapes a lot of people because the they’re pretty laid back when it comes to shouting about themselves.

The Lynskeys managed to conquer the world while keeping the “Family” together with their feet on the ground and they’re still at home making bikes in Chattanooga Tennessee.

You can find them at LynskeyPerformance.com
Have Fun,
Charles Manantan
[email protected]