Mavic = Wheels. That’s it, right? I mean why even think about big yellow for anything but round stuff… At least that was the thought process when I looked at the size of the box sent from Mavic’s Media mogul (an ex Tech-geek, so he’s OK) Zack V. “What kinda wheel fits in something that small?!” was the thought.

Popping the box open, I noted the puffy plastic bags, saw that it was soft goods and the thought changed to “crap, clothes articles are a pain in the ass sometimes and clothes from parts makers are frequently literally a pain in the ass”. 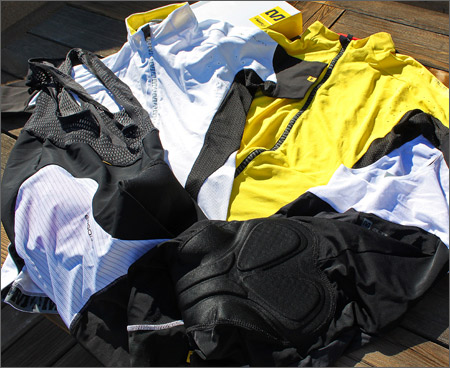 Someone at Mavic took their time with this kit. It’s not simply Mavic graphics stuck to basic materials as is the case with most companies with priorities set in hardware. This kit gets right in the face of technical wear from the likes of Assos and Capo and puts an exclamation point on the lack of features with “Image only” brands.

Of course, for most fully functional people, the affect on your genitals is the first priority in evaluating anything (food, cars, hair care, tools, employment… anything)… With that in mind, we’ll look at the shorts.

We have a pair of both the Infinity and Helium bibs. 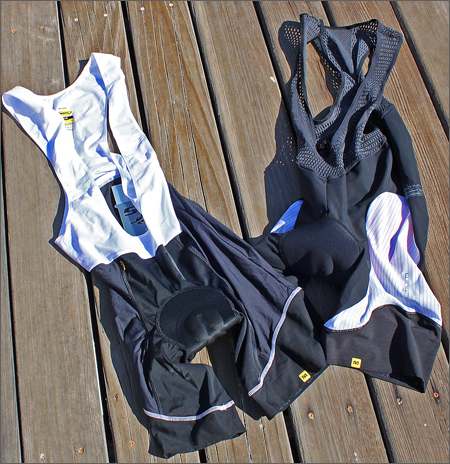 Note that we’ve received a pair of updated Helium Bibs since this picture.

The Helium shorts ($179) are designed as the minimalist / light set and feature a fairly traditional looking bib section. 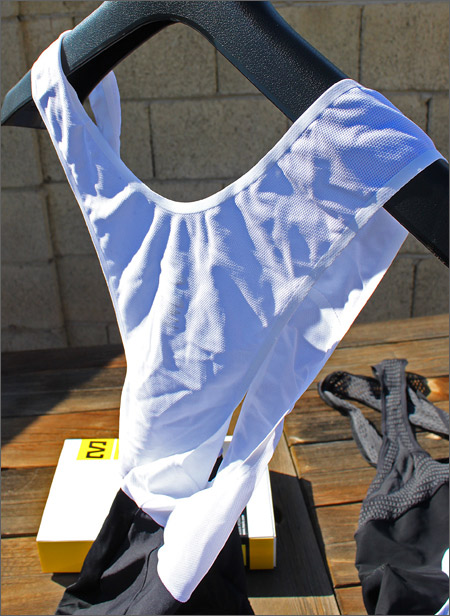 This is a very soft fabric with elastic edge seams that conform well and offer very good breathability. 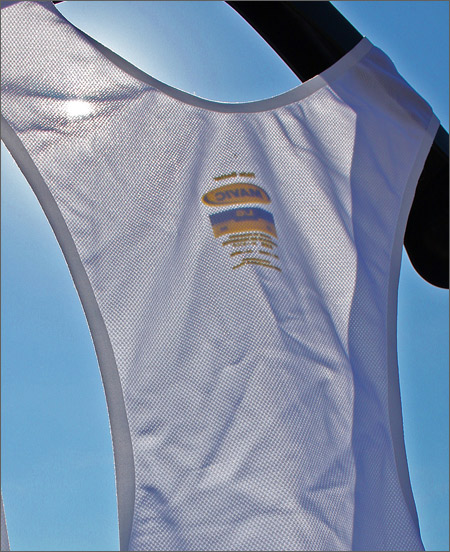 Both the upper “bib” section and the lower “short” section materials are also noticeably light weight materials. Light enough that despite having reasonable compression, there is virtually no resistance to movement on the bike.

Mavic have a name for EVERYTHING and their name for this particular fabric feature is “Sleek Power”. 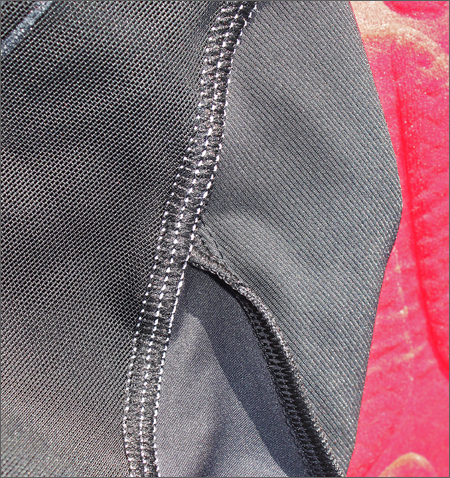 Like all top line shorts there are multiple fabrics in the lower section… One fabric seems to try and be damn near nonexistent, allowing no resistance to movement at all. Another weave provides notable directional compression for support but offers virtually no resistance to pedal stroke. The lower leg section has notable compression and features Mavic’s very thin silicone grip “M”s that stick to your skin… 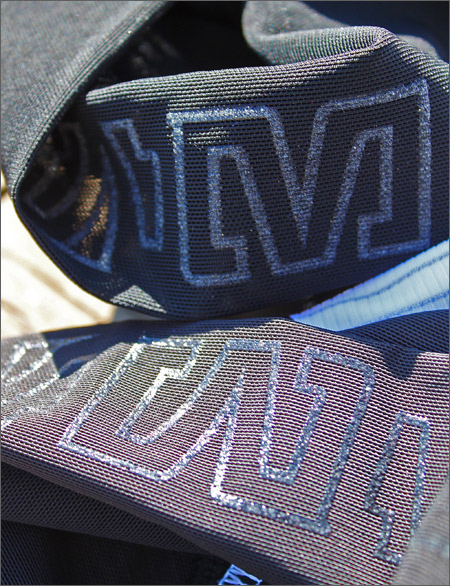 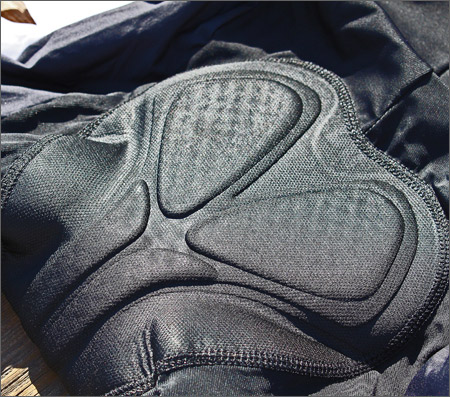 Yep, that’s actually the side that faces the saddle as well as facing the general public. If you happen to get a pair of these bibs in all black, you will be looked at with tilted heads (and a smirk) on a group ride until people actually ask if you know you’re wearing your bibs inside out.

Now if you were wearing your bibs wrong side out, folks would actually see the Ergo 3D Pro pad… 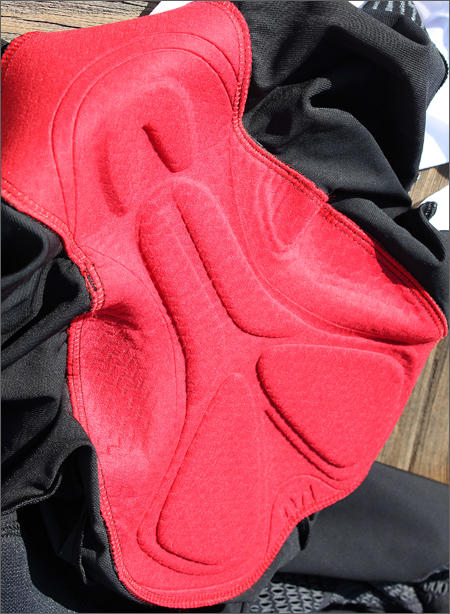 This is a mid high density pad that is fairly firm but also thinner so as you’re wearing the shorts it contours as well as some softer and less supportive pads.

The Infinity Bibs” ($219) go with the same scuff resistant saddle-side material, but a quick look lets you know the Chamois on Mavic’s top line bibs are a bit different. 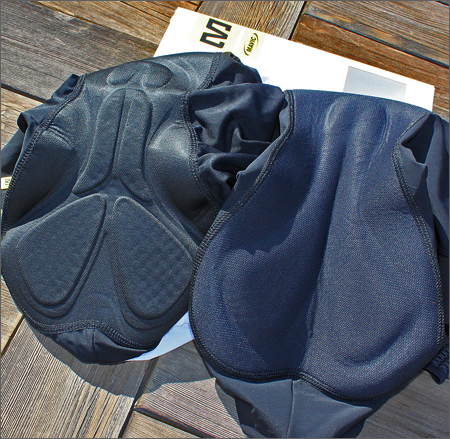 The chamois used here is the 3D Ultimate and it’s among the top couple of pads available currently in the case that you wish for the very free movement you get with some minimalist chamois but simply want more cushioning than the same minimal pads typically provide. 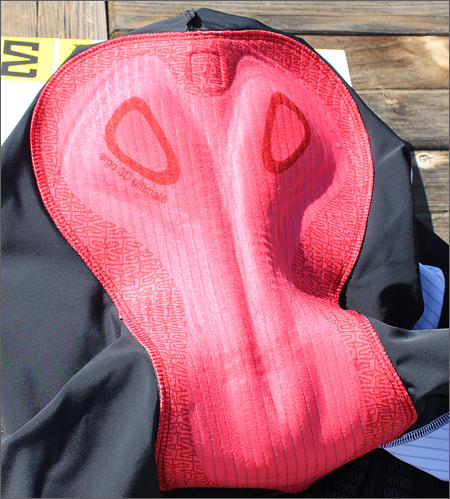 This is a VERY good pad that seems to have better separation from one side of the pad to the other… It’s almost like two different halves versus one solid piece.

The legs on the infinity are also multiple fabrics but these shorts combine for a bit more compression than the Helium Bibs.

The same lower leg compression material and “M” leg grippers but with a different side panel material. 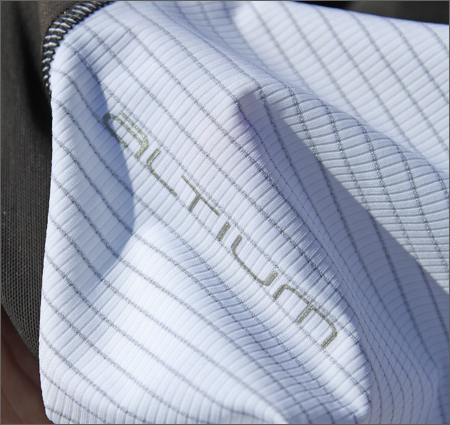 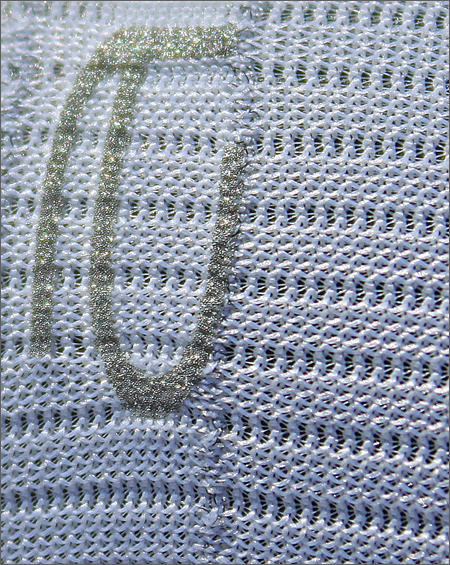 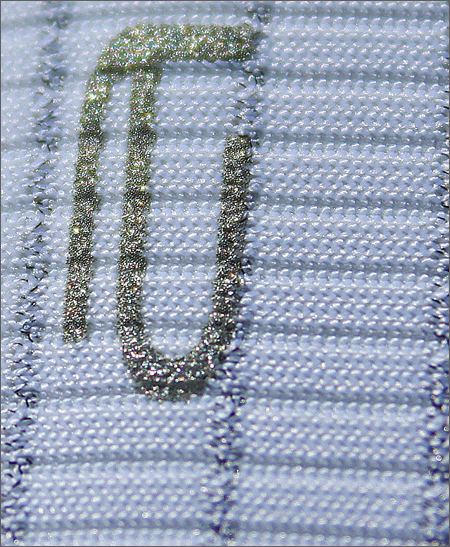 Another substantial difference for these bibs is the “bib” section… Mavic’s “ergo bib” section isn’t actually “fully seamless” as there are edge seams all round. 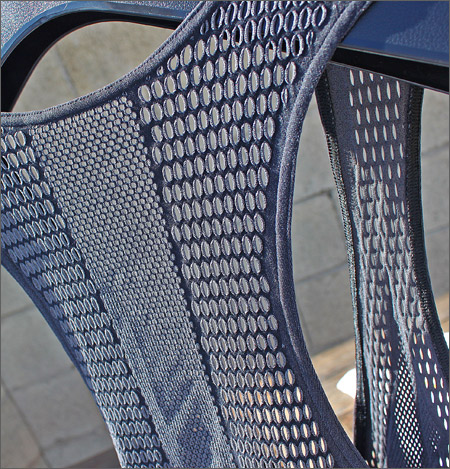 But frankly you can’t feel the seams anyway and the seams themselves are not the “cool” part of this upper. The real treat here is the substantial and slightly raised perforations… 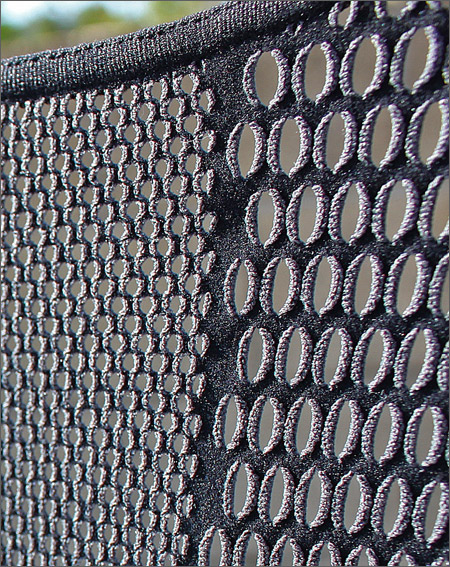 The holes actually have a bit of stack height to them, but the material is so soft that you won’t feel them. But it’s not the feel (or lack of feel) of the holes that’s notable. What is notable is that these shorts seem to wick moisture and breath better than anything else I have personally tried (and that’s not a small amount of clothing).

The inside / skin side is a super soft, moisture grabbing weave and the holes are punched in a way that the material curls out to carry moisture both to the wind / jersey side, away from your body…

The small holes are also raised and create air gaps.

The combination of materials, holes and raised gaps combine to do a far better job than any pull-push hydro moving combination that I’ve tried. It’s great performance that works well in the heat of Arizona but this type of tech is arguably even more important in cold weather moisture handling.

The fit for the Helium and Infinity bibs are similar but the feel is a little different. The Helium are like riding naked. Completely free movement with a touch of support. The Infinity are more supporting with very good movement and a Chamois that both moves more freely and offers a bit more padding… Both have breathable bib sections but the Infinity’s top section is chart topping. 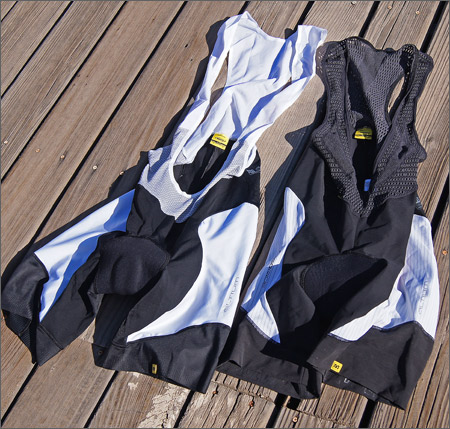 OK, Here’s the scoop on updated Heliums… Damn near everything else stated above is the same, only a bit better, especially in the new Chamois on the Helium! 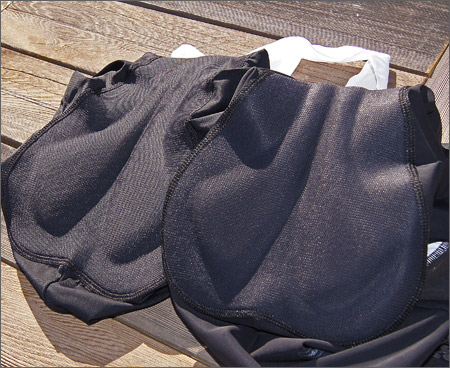 Once Mavic read the draft of this they noted that they decided that the split Chamois on the Infinity could be combined with the perforated padding material of the Helium and bang… The new Helium pad is a bit less firm than the old pad and moves with more freedom. 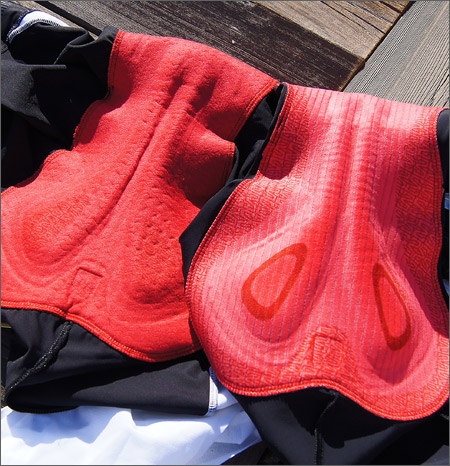 They also noted that there was a bit more compression at the knee cuffs than they wanted in an ultra-free feeling kit, so they changed the bottom material to a freer moving material (still with good compression), as well as the leg grippers. 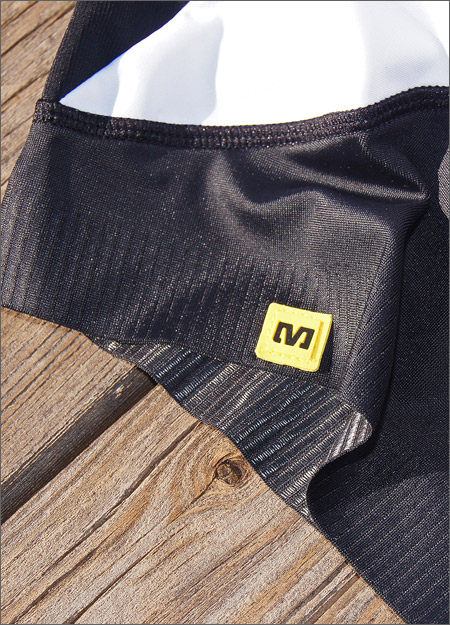 The new material required a new approach to leg grippers so Mavic went micro and have somehow weaved what seem like silicone threads right into the lower part of the leg. 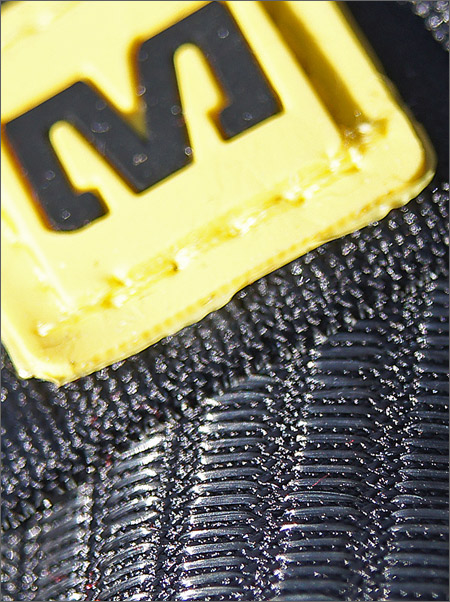 There is also a change to the bib section… 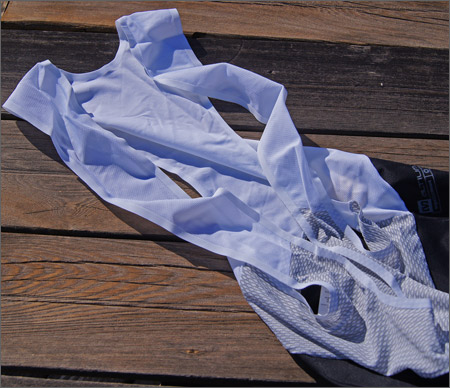 They managed to go seamless along the edges with an elastic tape. The material is still breathable and thin and they’ve added a different lower material around the bottom (stomach area). 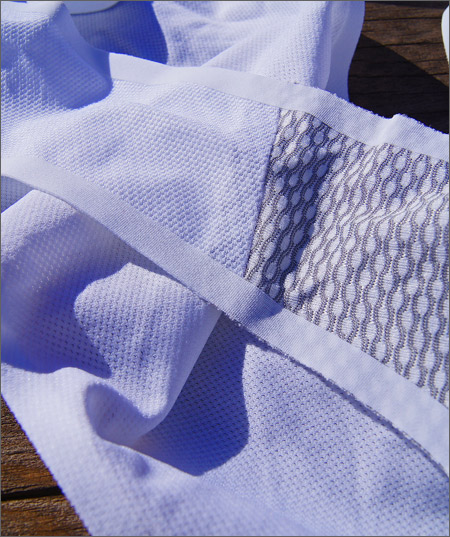 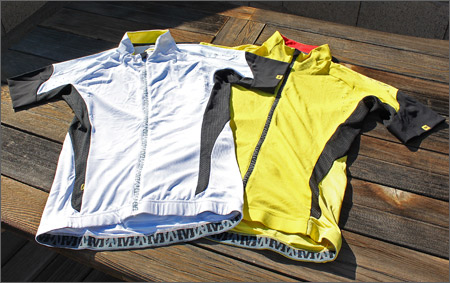 The main body is a very soft, lean form fitting material with a primary focus on wicking / venting, but Mavic take venting 2 steps further than most jerseys. They feature a highly breathable underarm material that is a loose mesh type weave of X-Static silver bonded fiber that breathes very well and is highly bacteria and odor resistant. 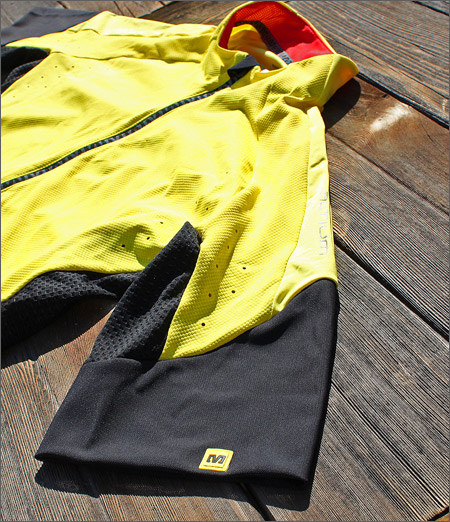 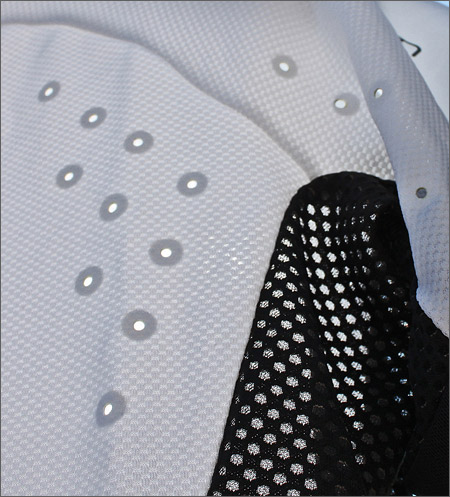 These add to already very good breathability and help shed moisture / vapor better than solid fabric will. They’re also reinforced and after several washings, have held up perfectly. 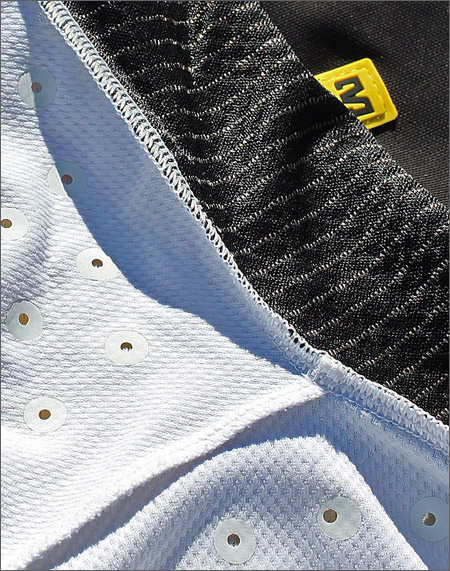 The back pockets are a combination of flat reinforced seams and a strong but pliable mesh material that does a fantastic job of getting rid or what typically is one of the worst places on your kit for holding moisture. 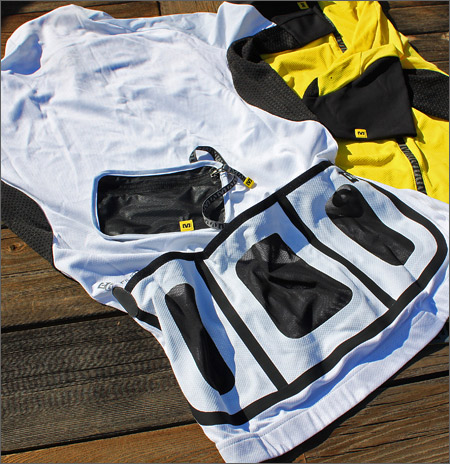 The attached zipper case is a nice addition.

Mavic also went the extra – extra mile on their pockets. Not settling for simply a large, well vented and secure triple, but adding a feature that I have done a crap job of “modifying” on my own jerseys. For communication and or for those of you using ear buds, Mavic have punched and reinforced a hole inside the pocket to allow a cord to pass directly from the pocket in through your jersey. 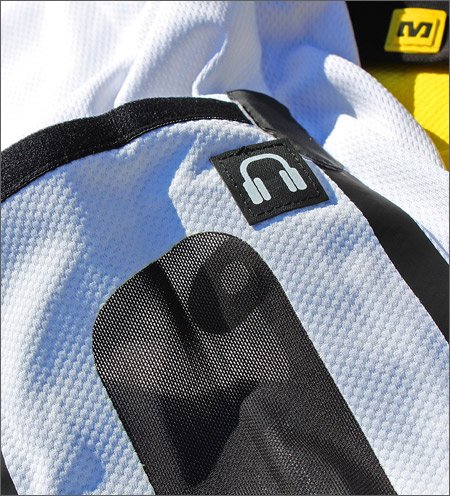 Put this on and you’ll find the fit to be long-ish short sleeves popular with some brands and a lean fit. Absolutely not a “club fit”, these don’t allow much belly space and might not be a tri person with actually functioning upper body muscles’ first choice.

But for the typical performance cyclist the fit will very likely find a home. Like the shorts they’re designed for on bike use rather than in-Cafe chatting.

Top and Bottoms Line
It’s tough to impress upon you what the build quality of this kit is. You can see the stitching detail and fabric weaves with some reasonable photography but you can’t feel the hand of the fabrics and you can’t feel the support, compression and freedom of movement when worn.

You can see holes and mesh, but you can’t feel the combination of these on the infinity jersey working with the wicking and ventilation performance of the Ergo-Bib uppers on the Infinity shorts. It’s like a teeny evap cooler on Arizona mornings and it’s AWESOME… (you people not living in the desert will have to look up what an evaporative cooler is).

I won’t say there’s nothing else like these items on the market because there are, but the products I’ve tried that perform like these are more expensive (some roughly double the cost). Actually I’ve not tried anything else that performs as well as the bib section on the infinities regardless of what you might pay, but cost isn’t necessarily my point.

What sticks out for you is likely what sticks out for me. Mavic basically didn’t make my radar screen for clothes and had I been hunting a retail set of skins, I would have missed out on these and been poorer for it.

Another example of Mavic’s clothing chops is their recognizing and changing the Helium Bibs so quickly. They had a great bib that fit the name “Helium” to start with, but they did the tweaks they should have to make these things seem even more, eh, less-existent…

If you get a chance and have a retailer close by, you should give these a look ahead of handing your dollars to that Italian or Swiss (or ItaloBrit / Chinese) brand.

Take a look at MAVIC’S WEB SITE for a more complete listing of clothing available… My exposure is limited to the kit you see here, but I can tell you that when the seasons change, I’ll be begging for a look at their fall and winter kit rather than plunking down money in the usual spots.