Maxxis International manufactures all types of tires from lawn and garden to high end auto and motorcycle tires. Better known for mtb rubbers, their three newest road skins – The Re-Fuse, Detonator, and Columbiere – are more than just skid marks.

– By Tad Hughes
In the bicycling world, Maxxis has been the hot shoe in the off-road community for years. Sporting colors best associated with the Basque region of Spain, but based out of Atlanta, Georgia, Maxxis takes a big step into the asphalt world as sponsor of US-based professional cycling teams, Health Net and Jittery Joe’s.
We ride the latest three offerings from Maxxis – The Re-Fuse, Detonator, and Columbiere. 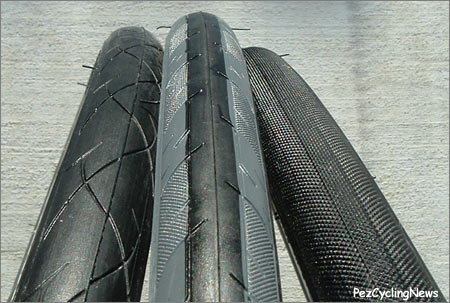 Behold the Re-Fuse, Detonator, and Columbiere by Maxxis.

To be honest, I was a little skeptical to try an offering from a company that makes a bazillion types of tires from pushcarts to dump trucks, especially when I looked at the prices. How would they compare to the euro-brands, and what is the pedigree?

But after conversing with Brad Kippling at Maxxis, it became apparent that he has forgotten more than I will ever know about tires. He explained their passion and commitment not only for racing (in every category) but the advantage of their think-tank for the average guy, like me. Tire design is an ongoing process and not only do we benefit from trickle down (like the pattern on the Columbiere that came from their moto GP testing), but there is also trickle up. It seems ideas are free form at Maxxis and compounds and testing from bike tires have ended up in other products like their rock-crawler series for trucks.

But probably the biggest benefit is the economy of scale to cost which allows Maxxis to produce the best possible product, maintain top-flite R&D and racing departments, all while providing very affordable prices to the consumer.

A bomb proof Kevlar® belt encased armored truck that rides like butter. Maxxis uses “silkworm” technology in the casing that adds a degree of sidewall protection without being overly stiff. Next a Kevlar® belt is sandwiched between the layers for maximum protection. A time tested knurled diamond pattern offers all weather capability and a solid pre-season choice. I was impressed with the ride quality, and wonder why at only $27.99 SRP for a folding tire, collegiate racers riding them down to the cords? 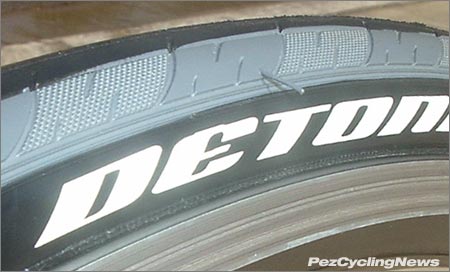 Nope, it’s not the latest Arnold flick – it’s the most popular road tire that Maxxis sells. It is built for the “everyman” – maybe even over-built. This is a great training tire, but also finds itself more than capable on fast club rides. It offers a bunch of features as well as value. On top of the silkworm casing rests a dual density rubber pattern (harder in the middle/softer on the sides) and a cool “V” shaped siping pattern. At $30 SRP, I found these to be a great ride and they offered more protection than a race tire, without giving up much in the way of performance. They’re available in 5 colors and 25c. If you want a set of tires you can leave on all week that do everything, the Detonators are for you.

Named after the climb in the 2002 Tour de France, the Columbiere is the tire you’ll see on a bunch of Team Health Net’s bikes. Caution: If you’re reading this and squirreling money away for that expensive set of tubular wheels, these tires could possibly change your mind.

Based on a double-ply nylon casing of 120 TPI, and a solid 62 durometer rubber compound, the Maxxis Columbiere makes a solid race tire, and its cool Metzler style moto pattern will solicit comments from your peers. These things ride fast, and are real world light at only 225 grams. There’s a distinct difference in the characteristics based on the pressure. At 130 PSI, they are brutally efficient and fast (especially in a straight line). At 120, they take on a whole other personality as the slight flex in the low-profile round sidewall encourages you to transition on to the edge.

My test Columbiere’s liked hot asphalt and corners; and inspired some confidence and rewarded aggression (just ask my wife how much I gushed after testing these!) – […or maybe we’ll just take your word for it…- ed.]. Maxxis has the rubber compound dialed and unlike some soft compound tires, the Columbiere’s offer glue-stick stick without the feeling of being glued to the ground. They offer the sensation of faster apex exits and more straight away top end. 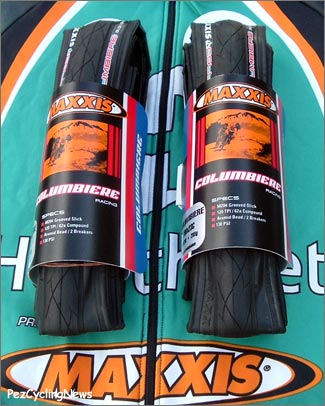 And the cool tread pattern… I thought it was all marketing, but after getting caught in a summer rainstorm while descending I am a believer. While not touting the durability of its siblings, its affordability of $42 SRP had me considering using these with latex tubes on the newest crop of carbon clincher race wheels, just like Health Net.

While the characteristics of these tires or tyres (in queens English) can be compared to some, the Columbiere’s ride very similar to Continentals but with better grip.

I wouldn’t however, confuse these as a direct replacement to some higher-end, more expensive tires. The high thread count and handmade build of the likes of Vittorria, Veloflex and Gomitalia are still a notch above in terms of ride quality and construction, but also cost a fair bit more. Maxxis has chosen to maximize value while only moderately sacrificing performance which is a philosophy that, unless you’re a serious racer, should not be overlooked.

For more information or to order, check them out on the web at www.maxxis.com.

Periodization For the Mind 4: Guided Visualization