The North American Handmade Bicycle Show came to Sacramento for the first time since the initial event in Houston in 2005. Starting with only 23 exhibitors and about 700 attendees, NAHBS quickly grew to 172 exhibitors and about 7300 attendees in 2011. It became obvious this weekend that the name should now be changed to The World Handmade Bicycle show, since the vendors there are no longer limited to this continent. At the end of the event, awards are given in various categories such as best mountain bike, best TIG frame, best alternative material and best in show.

When the door opened on Saturday, my first stop was at the table of Roland Della Santa. He’s best known as Greg Lemond’s framebuilder from Greg’s amateur days before he was paid to ride other bikes. Roland is still making frames from his shop in Reno, NV with occasional help from one assistant. When I lived in the Lake Tahoe area, many of my friends had ridden his frames and knew Roland personally. Finally, I had a chance to meet the man myself before the crowds swarmed the booths at the Sacramento Convention Center. 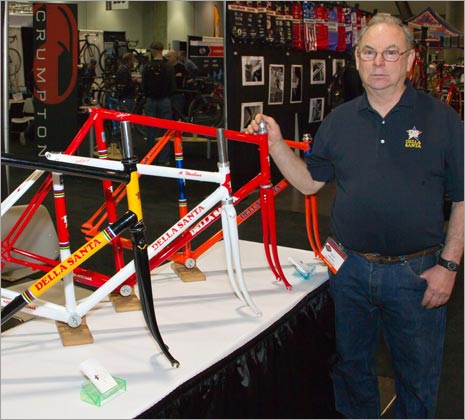 We talked about mutual friends, Lemond, dropouts, getting chased (and caught) by dogs and the difference between Columbus and Dedacciai tubing (Roland uses both but says they are exactly the same). Roland’s frames look pretty much like they did 25 years ago. No fancy tubing sizes or shapes. No wild paint jobs. He still builds some with 1” threaded headsets and steel forks. Some of his dropouts are even identical to the old horizontal Campy dropouts that were ubiquitous on racing bikes in the 1980’s. We talked about fillet brazing vs. lugged frames. Roland says he tried fillet brazing but claims he abandoned that practice because “I was no good at it”. He posed for a couple of photos, then recommended I get myself over to another area of the floor to photograph “this Japanese guy’s bikes” before the crowds got too large. He told me the metal artistry of those bikes was out of this world and pointed me in the general direction of Cherubim bicycles. 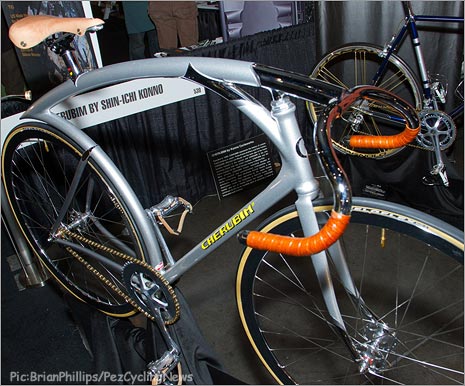 The “Japanese guy” Roland was referring to was Shini-Ichi Konno, I later learned. His father started the Cherubim bicycles and his uncle was the founder of 3Rensho. The track bike they had on display was easily the star of the show with its bow shaped top tube and seat tube that flowed around the rear wheel as if sculpted by the wind. It had a chrome one-piece bar/stem combo that continued the arch shape out in front of the head tube. It didn’t look like the lightest track bike there. In fact, it was probably the heaviest, but it was definitely art. I snapped a few photos of it, as well as a very conventional road bike they had on display, then moved on. 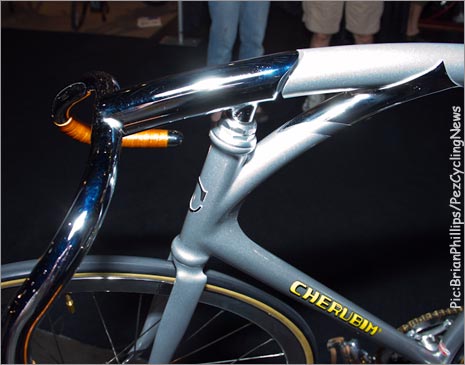 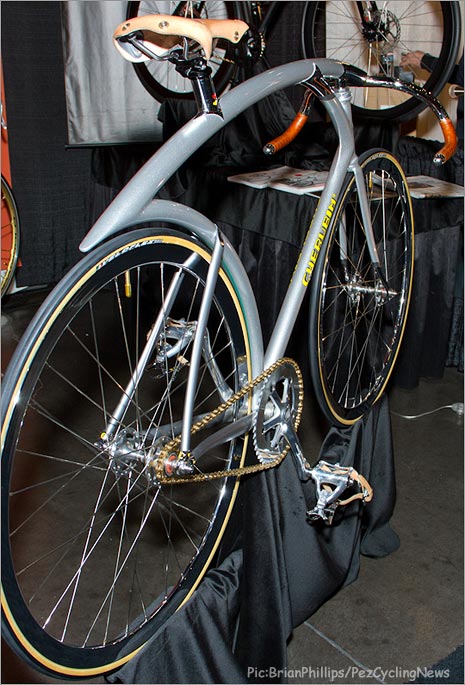 Next stop was Guru’s booth with their “Dynamic Fit Unit” machine. The system allows them to not only analyze and adjust your position for comfort, but by measuring your output while incremental adjustments are being made, you can find the most efficient position for getting power to the rear wheel. All this is done while the rider remains seated and clipped in. Definitely worth looking into if you’re thinking of getting a custom made frame, but it can also help you with your existing setup. 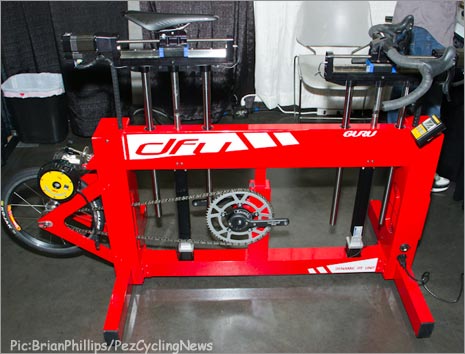 The next section that caught my eye was the display from Festka of the Czech Republic. Their Royal Flush bike was one of my favorite road bikes of the entire show. The bright red aluminum lugs contrasted with the black carbon tubes to give it a very striking look. Nearly as stunning was another road bike in their line-up; the all carbon Mops. Not sure who thought up that name, but it probably lost something in the translation to English. The guy I spoke with at their booth smelled a bit like he’d just finished a cigarette, so I kept my questions short and moved on. 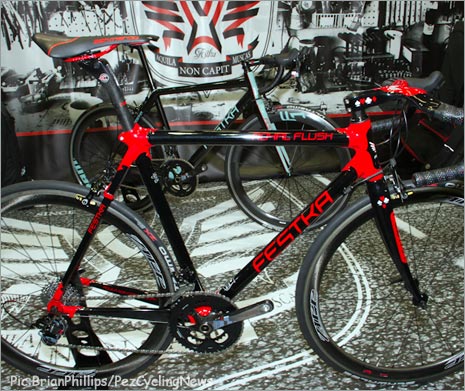 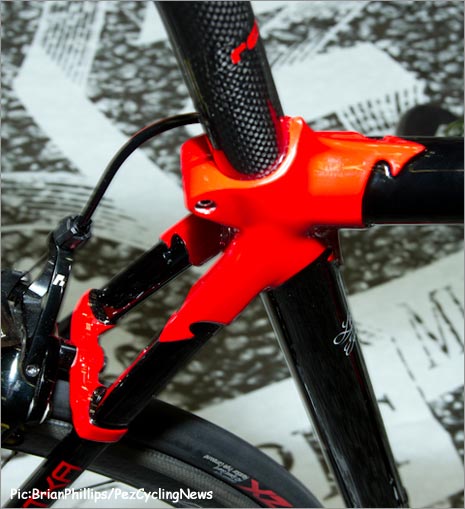 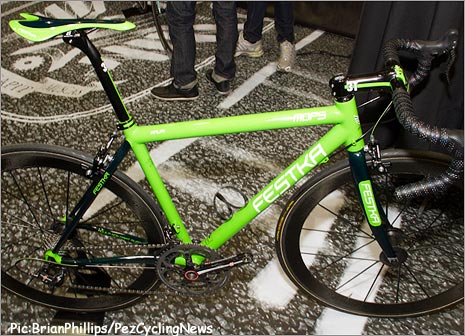 At Tom Ritchey’s booth, I snapped a few photos of Tom and his gorgeous Swiss Cross cyclocross bike. I chatted with his wife Martha for quite awhile; nice lady with a beautiful smile. Then Gary Fisher shows up looking like a Swiss Cross himself. He and Tom posed for a few photos then some other guy showed up. The three of them were all grouped together while the crowd began snapping photos like crazy. 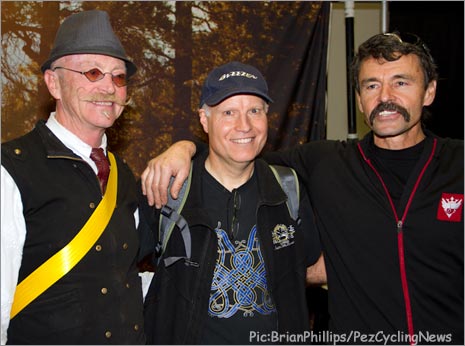 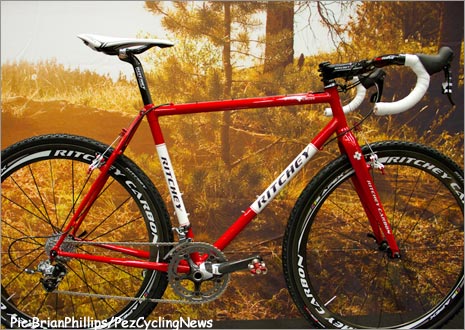 Martha Ritchey herself was clicking off shots with her point-and-shoot camera as I leaned over and asked “who’s the guy in the middle?” “That’s Joe Breeze”, she told me and the hair on the back of my neck began to stand on end. I hope I can be forgiven for not recognizing Joe Breeze, although I did attend a class at Lake Tahoe Community College with his mom circa 1987. I’m more of a roadie, so I didn’t recognize him but I was keenly aware that the three founding fathers of mountain biking were now standing right in front of me. I got a couple of photos off before Joe said his goodbyes and disappeared into the crowd. 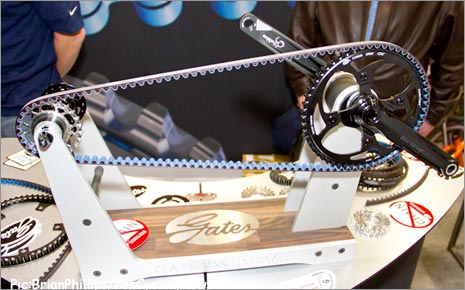 The booth at Gates Carbon Drive had a drivetrain that showed off their system very well. When belt drives first came out, it was understood that their use was limited to single speeds that were not fixed gears. The belts at the time couldn’t handle the forces of a fixie, but that is no longer the case. A very knowledgeable rep there explained how they have several different lengths of belts; you choose the one that’s closest to what you need and adjust the tension with your choice of cogs and the rear wheel position. The chainrings are made to fit on a conventional crank. Unlike a chain drive, he explained that you don’t get the same slop with a belt drive system that’s especially noticeable when doing a track stand. In addition to the teeth on the sprockets and belt that mesh together, there is a groove in the center of the cogs and chainrings that lines up with a notch down the center of the belt, keeping things running straight. Obviously a straight chainline is critical when you set one of these up, as it seems the belt drive system is less forgiving of an improper chain line than a standard chain drive would be. 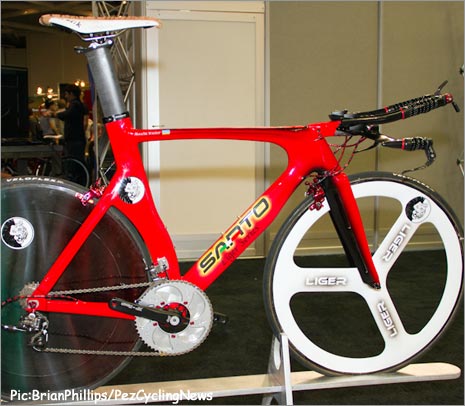 The folks at Sarto Cyles had one of the more impressive displays of the show, if not the largest amount of real estate. A Delorean car from the 1980’s was parked in the middle of it all, surrounded by their road, track, TT, urban fixie and mountain offerings. 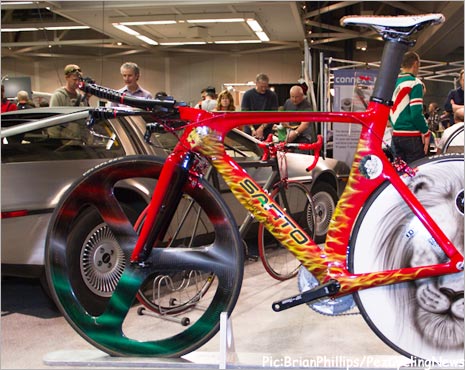 One of their reps explained to me how they still hand build their frames in Italy unlike many other Italian manufacturers who are outsourcing much of their work to Asia. Their Cima Coppi model was my personal favorite. The bare frameset they had felt lighter than the cordless mouse on my desk. Their website claims it weights 660 grams for a size 54. 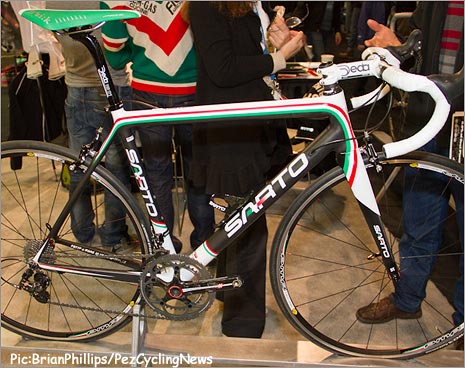 It wasn’t long ago that Craig Calfee’s bikes were about the only bamboo frames around. Now there are several others, including Boo Bicycles from Fort Collins, CO. Boo combines carbon and bamboo in their frames to maintain light weight while imparting a ride quality that they describe as very unique. Apparently they’re also earning some cyclocross race results with their frames. They attracted a lot of interest at the show. 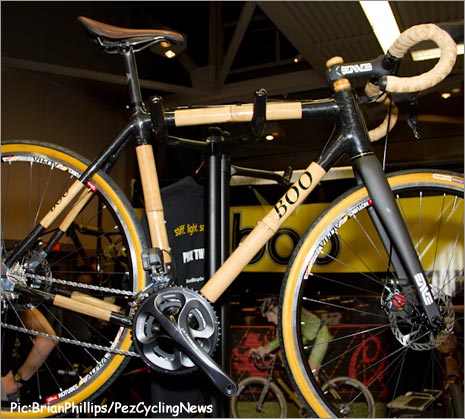 There were a few other alternative materials in use, if wood can be considered alternative. Renovo and Beke’s Wooden Bicycles were a couple of examples of beautiful furniture on wheels. 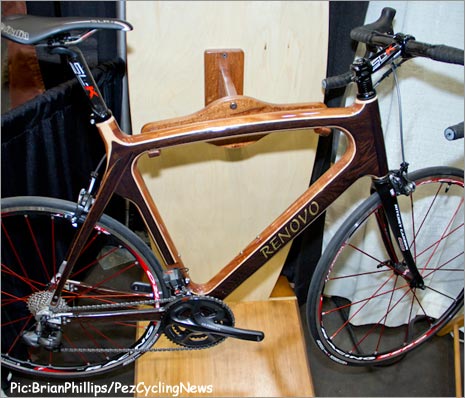 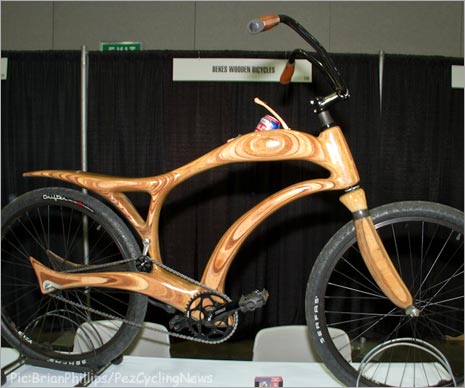 Jon Hjertberg’s Wheel Fanatyk featured wood wheels themselves. You might recognize the last name. Jon’s brother Ric is president of Madfiber wheels. They used to own Wheelsmith bike shop in Palo Alto, famous for its collection of bicycle racing memorabilia, including an actual cobblestone from Paris Roubaix. Jon tells me his brother probably still has that stone in storage in Seattle. I offered to take it off his hands if he needs a place to keep it. At one time, Wheelsmith built wheels for most of the pro peloton. Sadly the shop no longer exists. That’s Jon with the grey ponytail. 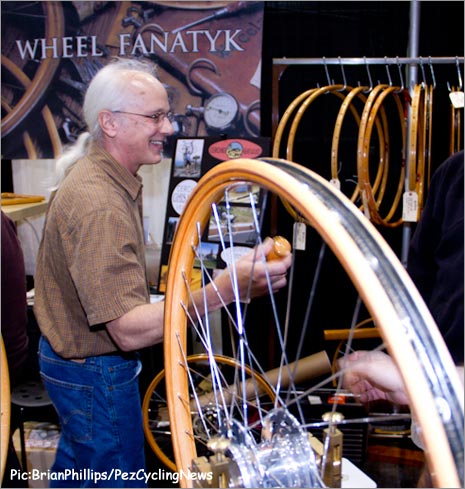 Baum Cycles of Gelong, Australia had several gorgeous bikes on display. The track bike had a unique stem/bar combo that they fashioned out of a 3T bar and an Enve stem. Just another one of the many beautiful sculptures I saw throughout the day. 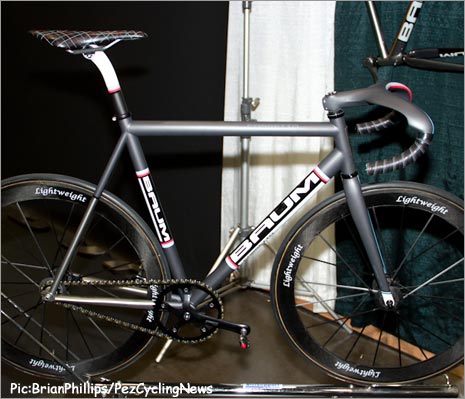 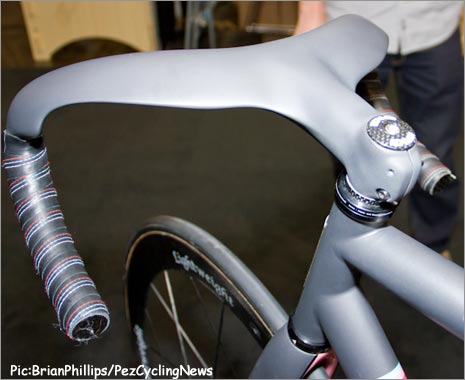 I can’t mention the words Sacramento and framebuilder in the same article without mentioning Steve Rex. Steve’s shop is about 8 blocks away from where NAHBS was held this year. You can’t ride anywhere in the Sacramento area without seeing examples of his work. His frames are primarily steel, but he also does steel/carbon hybrids. Steve had a nasty crash a couple of years back that caused him to give up working for a short while but he’s been back to full production for some time now. 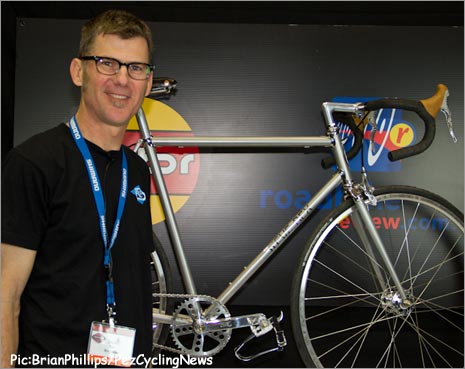 It would take several more articles of this length to do justice to the quantity and quality of displays at the show. Not only was it a great event for consumers, but there were several vendors there that market directly to framebuilders, such as tubing and lug manufacturers. There were also seminars on topics ranging from finishing brass fillets to mounting decals. I only attended one day out of the three, but the sensory overload should last for weeks.

• You can relive the love at the show’s website here:
2012.handmadebicycleshow.com/