We’re not in Kansas anymore! My initial shock soon wore off after I opened the box containing the latest and greatest road shoe from Nike. Is that candy apple red? There it was, shining proudly in the box… behold the Poggio II! What snapped me out of my halucinatory trip down the yellow-brick road was that I could barely feel the weight of these shoes in my hands… 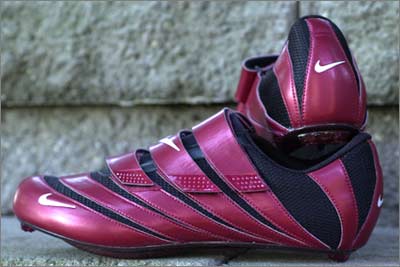 They’re lighter than just about every other shoe, coming in at a claimed weight of under 260 grams (depends on the size). Sheesh – I have socks that weigh more than these…

LET’S GET TECHNICAL
They’re made in Italy, and as we all know, nobody makes shoes better than the Italians. The upper is made from Nike’s Teijin Aero Technora which is a slimmer/lighter version of their KNG100 Synthetic material – it looks like leather, but is way more durable. It’s the same stuff they make their soccer boots with.

I spoke with Patrick Leslie of Trek, (official distributor and technical advisors) who explained that new for this year is a stiffer heelcup, as part of a new design that also improve airflow through the shoe. He also confirmed that the shoes were developed with a lot of racer input. In fact, most of US Postal wears them but Lance is already working on the 2004 model. 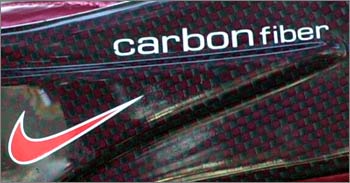 Snazamataz – The lower is carbon fiber – says so right on the shoe.

The sole and upper are bonded with something like space-age superglue, and I’m told there have been no warranty claims reported to silence the dreaded “talking-shoe” syndrome.

Nike claims the lowest stack height on the market. This puts your foot closer to the pedal spindle, and minimzes flex – not that there’s any flex in that super-stiff carbon sole, at least that I could tell. 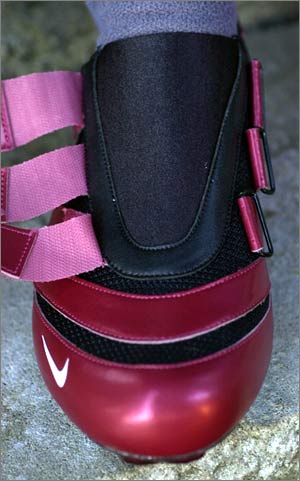 The neopreme tongue is completely sewn into the top of the shoe, to help the snug fit and wick away moisture – keeping you more comfortable. Three long velcro fasteners keep ’em tight – just the way we like it.

SLIP INTO SOMETHING A LITTLE MORE COMFORTABLE
Now, being a style conscious and secure in my manhood, the flashy red color did not disuade me from enjoying the shoe. In fact, these shoes must be worn with the same attitude one would employ when sporting a brown faux-pony hair blazer – that is “absolute confidence”. And I admit that after watching my feet spin a few times around the cranks, I got that good ol’ feeling that comes with every great product – I began to think I was faster. In fact, this is the same shoe that Tyler Hamilton wore in last year’s Giro and Tour – good enough for me.

The shoes are comfy… really comfy, kinda like your favorite slippers, only super stiff. The last is built to wider American standards, which is great if you’ve got feet like me. I got my dad’s feet – high-arch and instep. I’ll never be known as “flatfoot”, but I do need a custom footbed for riding – saves my knees. A lot of shoes won’t work for me, since they don’t have room for both my orthotic and my foot inside. Not so here – the Poggio II had all the space I needed, and then some. This saves a me a $20 trip to Mr. Ho – my local shoe Yoda – to modify the length of the straps, tongue, and other parts. 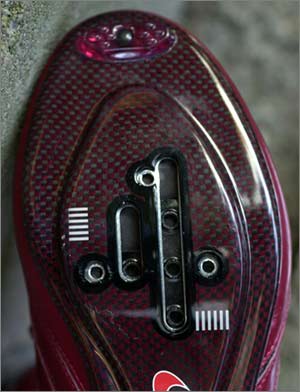 On the bike they feel great – you look faster and the light weight means you’re using less energy to turn those pedals = faster riding. Get it? The velcro is easily adjustable, on the fly and elsewhere, so swollen feet on long riders are not an issue. The crossmarks on the sole make cleat alignment a breeze.

They’re available only at Trek and Fisher dealers, or selected Nike stores will have the shoes available for sale. They’re not cheap, and will probably set you back the better more than a couple of c-notes, but then aren’t you worth it? And if Varsity Red is not your color – pick up a pair in white/black or chrome – but wear them with “absolute confidence”.

Check out the Trek website for more info on the Nike Poggio II.