All trade show’d out? Wait, there’s another, a special one in Padova, Italy called Bici Expo. Pez spent a day there uncovering the true meaning of Made in Italy… getting ever so closer, here in Part 2.

Sarto
When we last left off, I was headed from Hersh to the subcontractors that had made their lovely frames, Sarto. Sarto had home field advantage here in Padova since they are located about 10 minutes away in Mellaredo di Pianiga. So the booth was pretty full and featured a number of frames – road, chrono and mountain – all in slick, matte finished carbon fiber, most of it covered in a fine 1k weave. No labels, no paint and no forks. Why? Because Sarto’s meat and potatoes, around 80%, is furnishing others with frames (forks come from someplace else). That leaves 20% sold under their own name which is a fairly recent endeavor. 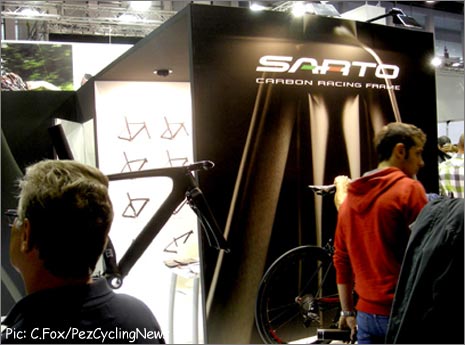 Ok, I lied. One frame was built up as a complete bike with some discreet Sarto labeling

The first guy I approached at their booth pawned me off on someone else after listening to a few of my questions. But the other guy was busy with some Yanks. The kinds that I despise, ones that think they own the place and make Italians speak crap English, while correcting them constantly. I waited, then returned to the first guy with another question that he didn’t answer. So I tried another tact:

Me: “So what IS your role at the company?”

Me: “You know, sometimes sales guys like talking to journalists that could promote their products,” said in the kindest of manner.

Then he quickly jumped into the aisle to shake someone’s hand. Of course, I eavesdropped on their conversation, hoping for some crumbs of information. Instead, they were talking about a good sized order and shipping dates. So I waited some more, but those Americans were chit chatting away, unaware that you’re supposed to keep it moving at trade shows. I left, came back an hour later and they were still there! So I went to the top: Antonio Sarto, the patriarch of the company. Where he promptly said, “I don’t really deal with the bikes anymore, but I did invent this saddle. I just play around now. You’ll have to talk to my son, Enrico (pointing to the guy being monopolized by my fellow countrymen).” Finally, I barged in. In fact, Enrico looked quite pleased for the break. A blitz intro and a few rapid fire questions convinced us that we’d need some follow-up time cracking their Made in Italy Nut. 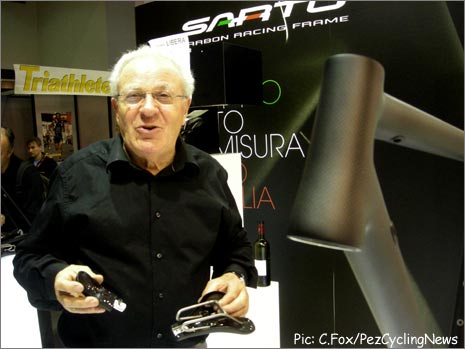 An Odd Trip Down Memory Lane
To understand Italians and Italy and even the Italian bike industry you have to understand a mentality that’s been formed by Grand Histories followed by declines. The Roman Empire, the Renaissance and the Italian Bike Boom all helped to shape a fiercely proud country and people. Even though those times are long gone, Italians are convinced that the most delicious food, the greatest architecture, the prettiest women and the best bikes all come from here. In many cases, they may very well be right, but often this arrogance clouds reason, especially when concerning the bike industry. 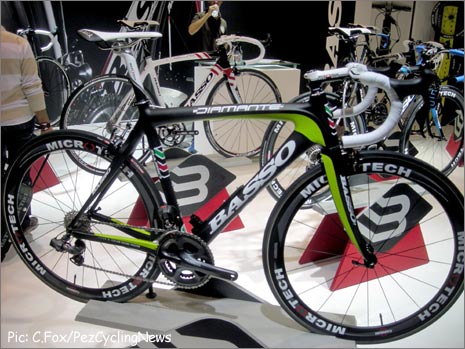 Many well known Italian bike brands either went bust or became irrelevant in the early 2000’s. Many have struggled on or have been resurrected. Padova was a great place to check in on their progress and that’s how I spent most of my day. Alcide Basso made well-crafted bikes in the 70’s and early 80’s – which are some of the best kept secrets in the vintage market. They expanded in the 90’s, suffered in the 2000’s and now seem like things are once again on the move with some fine looking rides. 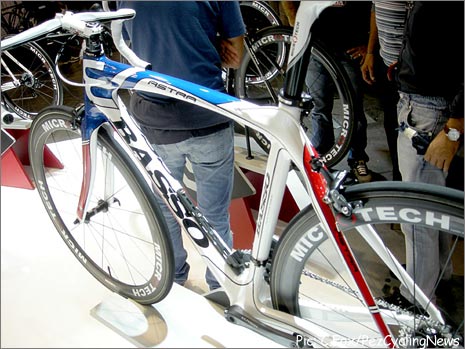 Guerciotti
Guerciotti is another Italian company that’s been around a lot longer than you think. It’s roots go back to the early 60’s where the Guerciotti brothers opened a bike store specializing in Cross, offering rebranded ALANs. The brothers can even claim ten Cross World Championships. Over the years, they’ve grown, setting up their own distribution company and carbon fiber manufacturing facility, as well as, sponsoring teams like Savio’s Androni a few years back. This year they’ve got Meridiana with Rebellin. Their booth featured a few nice looking things, the most promising being a 750 gram road frame that seems to follow today’s formula for a light, stiff ride, with a touch of trendy fluoro for added style – tube to tube and Made in Italy. 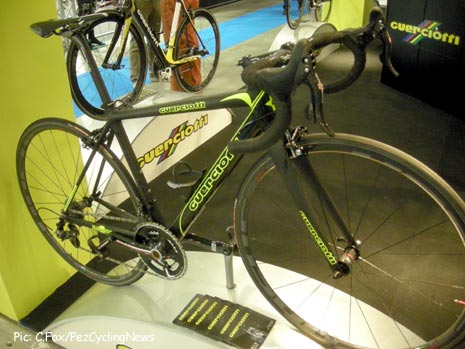 This light ride is called the Eclipse 769 with obligatory fluoro

Biemme
I’ve got a Telekom jersey from the early 90’s that was made by Biemme… and that’s about the last I’ve heard from them. They have changed their spelling, now they are called B.emme. Their big sign beckoned me in and straight to the youngest guy in the booth.

Italian Trade Show Tip: young kids say all kinds of sh*t they really shouldn’t be telling journalists. That’s because they’re safe, they are either the owner’s son or his nephew. If he’s well dressed, it’s the son. My Biemme sherpa was most likely a favor to the owner’s sister (the word nepotism comes from the Italian nepote or nephew). And we had quite a pleasant exchange. 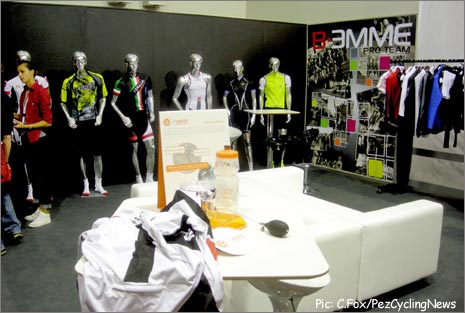 Me: So what’s new at Biemme, I lost touch with you guys about 20 years ago.

Kid: Well our factory burned down to the ground and we had to start completely from scratch.

Me: Bummer. So is your stuff all Made in Italy?

Kid: Oh yes (said proudly), except for the stitching

Kid: Yeah, but we tried bringing it back to Italy a few years ago, set up a factory and trained the new employees, but they were terrible. Italians just don’t have that technical skill anymore. We lost lots of money on that mistake, so we ended up going back to sewing the clothes in Eastern Europe.

Me: That’s what Assos says, too. So where are you guys positioned in the market?

Me: You know, Castelli is going medium high, with lots of chic stuff.

Me: So what’s The Thing I’ve got to see?

The nephew showed me this new material that is completely waterproof, yet lets air out – they had a kind of middle school science fair exhibit with a piece of this material in a sealed jar with water above it and a little hand pump that blew air from underneath the cloth, making the water bubble. Cool enough, cyclists are always looking for a better rain jacket. Then he handed me their’s and I was dumbfounded by its stiffness, thickness and weight. Where upon the kid knowingly answered my silence, “well, it’s very popular with hikers… as a winter jacket.” Actually things weren’t all this grim, there were a few nice looking garments at B.emme.

Miche
Miche’s another one of those Italian companies that’s been around for awhile, recognized for mid range bike components, many bike shops use their stuff as cheaper Campagnolo replacement parts. However, in the past few years, they have focused their efforts into five gruppos (three road and a cross and pista) that include wheelsets. They make everything from chains to brakes, but the derailleurs and Ergo levers come from Campagnolo. 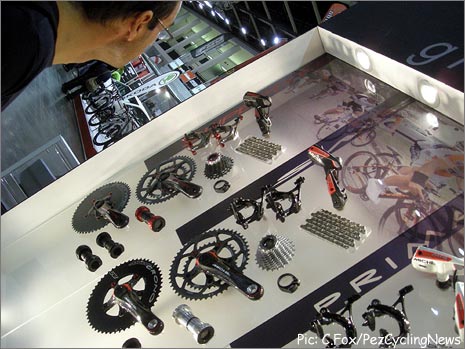 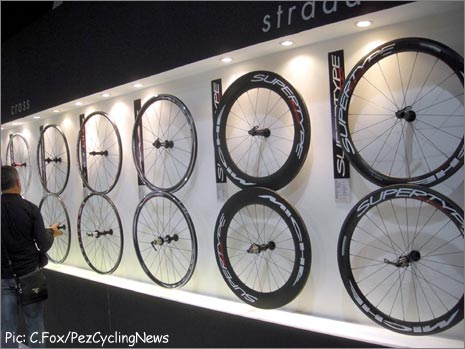 ITM
The Italian Resurrection Theme continued with ITM. Back in the 90’s your stems and bars either came from 3T/Cinelli (it was the same company back then) or ITM. Remember Pantani’s yellow Big One stem? Well, ITM was one of those Italian companies that did not make it into this decade. Four years ago, their Asian suppliers called Bike Machinery Trading Co bought the brand out of bankruptcy and filled its catalogue with everything from their factories in Taiwan and China from frames to wheels to stems and bars. 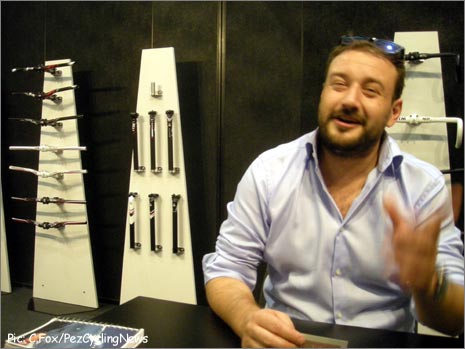 To my jaded eye, there was nothing interesting or new in the ITM booth. Correction: their sales guy, Luca Garattini. I am a sucker for experts, whether they be bike mechanics or accountants or in this case, salesmen. Masters of trades go about things with an ease that betrays the complexity of their craft. I know enough about sales to recognize when I am in the presence of a Master. Luca was part actor, part technician, part saint, part slime-bag, part magician. He had the whole repertoire, using gestures and sotto voce between-you-and-me’s. Unfortunately, all of the interesting stuff he said was off the record. Get me drunk and I’ll probably spill his beans. Thanks to Luca, I might even give ITM’s stuff a try (that’s how good he was)!

FIR
FIR, which used to be written FiR, stands for Fabbrica Italiana Ruote and it was a badass company in the 80’s and early 90’s, they could claim a few Tours, Paris-Roubaixs and some World Championships. I’ve got two bikes with their rims still going strong. The brand fell on hard times (and their quality started to slide) and eventually it was acquired by Gist. Gist is the umbrella company that distributes Tioga and SMP. They also offer a line of clothing, rebrand Asian frames sold as Kardan and sell machined small parts and components mainly for mountain bikes under the Aerozine brand. 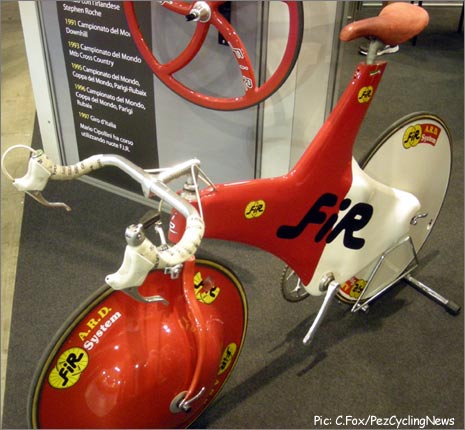 This is when FiR was a badass

Other than the carbon fiber rims, all of FIR’s stuff is Made in Italy. They offer 12 different wheels and several hubs designs. Nothing radical here, but their products are competitively priced and meet all of the “desired” weight segments and colors. Lastly, all of their wheels are laced and trued by hand. Hopefully, all of this adds up to a successful rebirth of FIR. 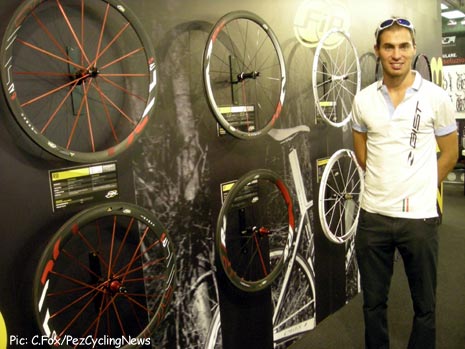 This young man laces and trues every FIR wheel

Legend by Bertoletti
I saved the best for last: the nicest bikes at this year’s Expo were Legend by Bertoletti. Who’s Legend, you ask? Since 1989, Marco Bertoletti’s been quietly making bikes for Passoni, Viner and others from his officina near Bergamo. In 2009, he decide to start his own brand, calling it Legend. Their three frame builders and a few assistants offer custom bikes in titanium, steel, aluminum and carbon fiber (tube to tube). Their construction was immaculate with accordingly high end prices. If these things ride as nice as they look, then this is a brand that has its act together. 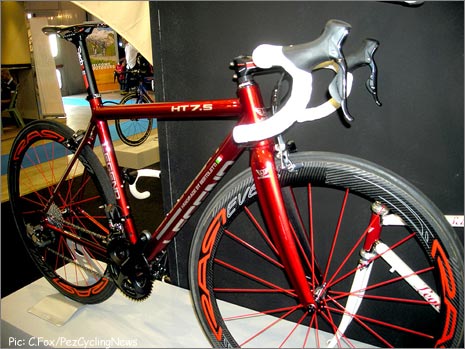 The HT7.5 is the second from the top carbon fiber model – here in lovely Saronni red 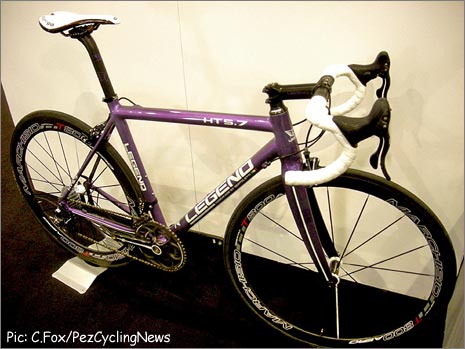 The HT5.7 is Legend’s mid range model, shown in a wonderful semi-transparent purple. Thank heavens for something different, something bold and beautiful!

After spending a few minutes talking to Marco Bertoletti, I got the impression that he’s an honest, proud craftsman. His wife listened in on our conversation, often nodding in agreement with her husband and smiling at my compliments. There was no pretense or big statements from Marco, just a quiet sincerity, convinced that he’s making really nice things (expensive things, too). And in my opinion, this is the best of Made in Italy.

Lance Busted: But Is It Over?