Last thing we tossed a leg over on the test front is the newest from Malmgren Imports, The Paketa Magnesium. We knew the bike would look good, but when they loaded it with all the parts and pieces from the Ultra Cool FRM folks and we slapped our house wheels on, I started to pay a little more attention to the Russian Rocket. 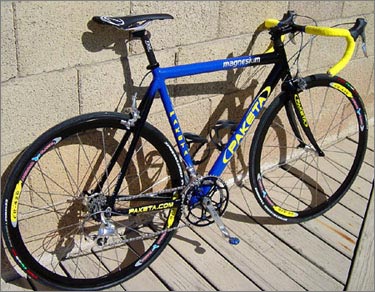 Paketa gets its name from the US pronunciation of the Russian (where they are made) word for missile. The Russian letter “R” actually looks like our “P” , so the Russion pronunciation is like “Rocket-a” – got it? Russia is its place of manufacture, and it comes from folks who work well with Magnesium (it ain’t your every day welding!)

Magnesium is a pretty interesting material in that, by volume, it is half the weight of Ti and about two thirds the weight of Aluminum (yes there are different grades of these metals and this is a generalization). It’s basically the lightest structural metal that is commercially available. Unlike some other miracle metals (like Scandium) that are used in such small quantities that they amount to little more than a marketing gimmick for some tube sets (but there are great scandium frames as well), these frames are more than 90 % Magnesium. That doesn’t mean that the frames weigh less than others, it means that they can make a frame weigh about the same as light weight aluminum, but can do so using much thicker tubing walls.

Among other things, thicker tubes provide better ding and dent resistance and offer better vibration damping. Magnesium is actually used a lot in Aerospace as a platform for mounting sensitive gear needing better vibration damping. Take a guitar string for example, a thicker string vibrates slower than a thinner string does, It’s kinda like that. The thicker Magnesium tubes also lose less strength in the weld area than typical aluminum (If the welder is of a high enough caliber to make the faster weld passes required when using magnesium…). Personally I like the idea of thicker tubes, as I am a little irked at some bike manufacturers that make tubes so thin you can feel them flex when you squeeze them. Manufacturers shouldn’t be producing some of the light weight CRAP on the market right now, and these Mag tubes are a step in the right direction…

Big Welds even at the dropouts and the slick looking Dura Ace and American classics gear. 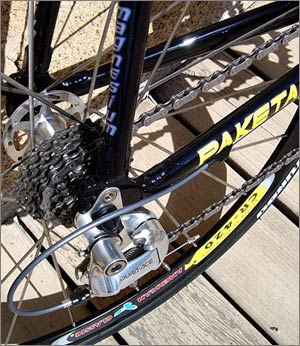 Of the possible negatives, corrosion is the greatest danger with Magnesium (Burning isn’t really an issue, as it would take one hell of a flame to ignite an actual Magnesium structure). The Paketa’s joints are all laser cut for accuracy, and after the weld process the frames are dipped in a chromate conversion bath. The bath provides the corrosion resistance inside and out and also helps as a kind of base layer for powder coating (better than paint…). They also recoat everything after the finish and prep work is done (coating all the areas exposed as they face the Bottom Bracket area etc.).

Now that I am out of breath, from answering the “why Magnesium?” question, lets get to the fun stuff!

The head set is the first thing that caught my eye (110gr, but that includes @ 20gr of top cap and expander bolt that some of the brands you know leave off of their weights). The thing is just plain out cool. It is incredibly clean looking and, if we would have had these things around and more available, the bumble heads that decided to use your head tube as a bearing race (Hidden head sets SUCK!) might have been kept away. I love the damn thing! 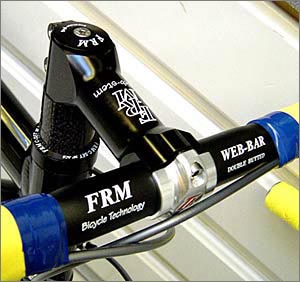 The Web Bars (220 gr) and stem (@110 gr) were at once a comfortable and stiff option, with good curves, an easy reach and a simple clean finish. The fact that they weigh on the low side is just a bonus.

The Cranks are slick machined jobs that, like the bars and stem combo, perform well (and are 565 grams). The FRM Folks could have brought the curve in a little more though, as wide feet will scruff the arms and they are not smooth on the shoes. I like em just because they look like a part that someone took off a Terminator robot… 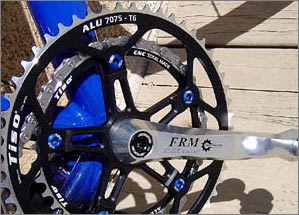 The Saddle (a private label Aspide) and Seat post topped off the bits pretty well. I am not a light weight saddle fan, and mounted my old standard after the pictures. The Seat post is a cool little number. Easy to adjust and snug. The post tips the scales at 155g. The ride with the Aspide was good, but slap on something not designed first and foremost to perform well on the scale (In my case a Selle Italia Prolink TA or San Marco Era), and you will enjoy the ride more. 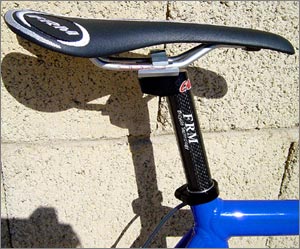 The rest of the Kit was solid Dura Ace, yes it was the “Old” group, but who cares? The gear just goes about its business, smooth as silk. The wheels were the super slick American Classics 420’s. It’s nice to have the saddle and wheels stay the same for tests as it lets you test the frame rather than the two parts that effect performance and comfort the most (given that the frame fits).

The bike weighed in at 16 plus with pedals. Weight means jack though if it doesn’t perform, and the Paketa does. A little bird just told me that it was a Paketa under Allison Lusby, who recently won the Mount Evans Hill climb (14,264 ft. summit) by a margin of 12’54”! It is stiff down low, and pedal response is good. It accelerates like most of the better Aluminum frames do, and a little better than a couple of the ultralights do. It does so with a little better ride quality as well. It’s not a silky as some of the high end carbon, but it’s better that most of the Aluminum in its weight class. It also sounds solid. There is less noise coming out of this frame than standard Aluminum. Good performance and better vibration damping… not bad metal.

Handling was good. The Geometry is pretty close to standard, so as long as they make ‘em properly aligned, they should hold a line well. No speed shakes or unstable, flighty, feeling with this bike. A few turns into it and confidence followed.

The only thing I didn’t like was the fork. It just made for a little different feedback through the front end than I am used to. I swapped it out for a couple of rides with a Reynolds Ouzo Pro and the front end feel improved quite a bit.

Finish was great. (although it usually is when someone sends a bike out to test). I really like the two tone Black and Blue, and the yellow logo fit well in the scheme (The yellow bar tape they sent really rounded out the look). It is bold and understated at once. The welds are beefy, but need to be with this metal. They are noticeable, but don’t really take away from the bike. Over all, this performed as they indicated it would, and there were no hassles at all during test.

Frame, fork and headset have an SRP of $1,999. You can check with Malmgren imports www.paketabike.com for prices on the FRM stuff (and I would as it’s good kit).

Vuelta Announces The Teams For This Years Race