Be CheapOh, Not Cheap
Recently, a reader thanked me for offering such insightful cycling advice – thanks buddy, fan mail is always appreciated. He noted some examples of his own pinched pennies, one of them was riding used tires. Now, I realize that I once suggested such recklessness (more or less here), but I have reformed my thinking – blame it on old age. Here’s my reckoning: a used tire has a higher chance of puncturing or suffering some other failure than a new one (obviously), so it would only make sense mounting it on the rear, because a blown out front tire is much harder to safely control. Yet, rear tires have a greater rate of puncturing than fronts and this likelihood is merely increased with a used tread. Sacrificing quality or safety is cheap, not CheapOh. 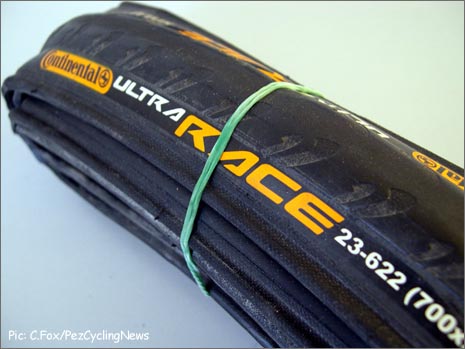 Some mid-range tires are pretty good.

Please, buy new tires. Now, here are a few of CheapOh tips to lighten the blow: first, take a look at the secondary product lines from the major manufacturers like Continental’s Ultra Race or Michelin’s Lithion. I’ve used both brands of tires and can report that they’re actually very good, just slightly heavier/slower, but cost substantially less and last longer than their high-end brethren. Tip number 2: mount these mid-range guys on your rear wheel and go with high ends on the front because here they will last twice as long as on the rear. Another tip: lose weight*. Ok, easier said than done, but lighter riders are (or should be) easier on all of their consumables like chains, brake pads or tires. And here’s the last one: after riding through road debris like glass, some riders use a gloved hand to wipe it off to prevent puncturing, which makes them go through gloves rather quickly, I prefer to use my water bottle.

*Bonus Half-Baked Opinion No.1: for most cyclists logging enough kilometers a week, losing weight shouldn’t be that difficult (but the sacrifice is); no alcohol and salads for dinner works for me, until temptation gets the upper hand.

The Wheel Fanatyk Tensiometer
Good CheapOhs ride handmade wheels – it’s mighty hard to beat a Shimano Ultegra hubbed and Mavic Open Pro or CPX33 rimmed, 32 spoked wheel for training. Comparable wheels from quality manufacturers are priced from $700 to $1000. These guys should cost about half that, weigh about the same and provide thousands of miles worth of smooth rolling, hassle free cycling. Then again, you could also build up a set of race wheels with Reflex tubular rims, lighter spokes and fancy, boutique hubs and still have it weigh about the same, brake better and cost a lot less than a high end set of climbing wheels. 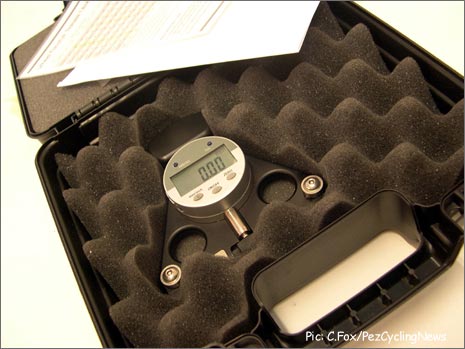 While good CheapOhs ride these wheels, even better ones make ’em themselves. There are old school, artisan wheel builders that can make you an excellent wheel just by feel. As for the rest of us, a more scientific approach is recommended. Ric Hjertberg is a wheel saint. Not only is he the Cerchi Ghisallo importer (wooden rims, check out our review ) and the guy behind Mad Fiber, he also has an astute blog AND produces the Wheel Fanatyck Tensiometer – based on Jobs Brandt’s design, it’s an updated version of the discontinued FSA one. 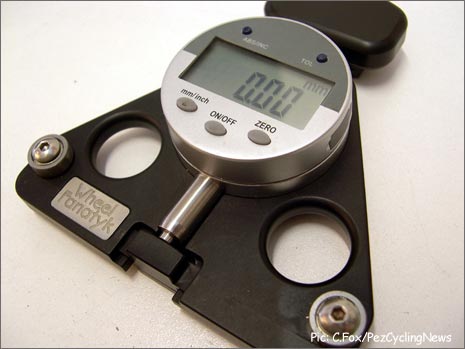 The first impression is that this is a quality tool. The hard case, the nicely printed instructions (a laminated conversion table is a nice touch) and the tool itself all embody this sense of weight and quality – somewhat Campagnolo-like, and that’s a true compliment. The tensiometer allows wheel builders an exact measurement of how much each spoke is tensioned. The digital readout can then be converted into kg depending on the spoke’s diameter. What this really means is that wheel builders can make a round, true and evenly tensioned wheel. Remembering my tour of the Alpina spoke factory review, they mentioned that most spoke failures occur because of uneven tension – saying, “it’s the loose one that always breaks.” 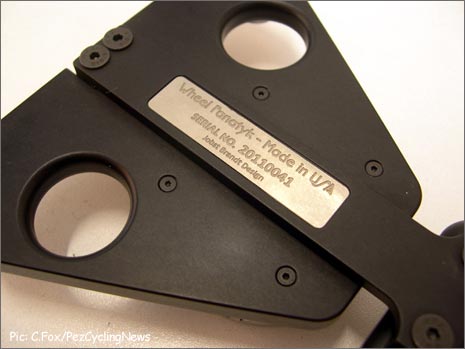 My only criticism of the tensiometer is that it takes a bit of practice to hold the thing steady and perfectly perpendicular to the spoke and hit the Zero reset button and then click the hammer thing all fluidly. Screwing this up for my first few efforts produced all kinds of wild measurements. Just part of the learning curve, I guess. Or here’s another excuse: I’m a lefty and most tools give us problems. OK, here’s another issue: it would be nice to have some reference information regarding optimal tension rates for certain applications, seeing as the Wheel Fanatyk has far more experience than most wheelbuilders (though he’s probably assuming that only professionals are using the tensiometer, not some jack*ss like myself). 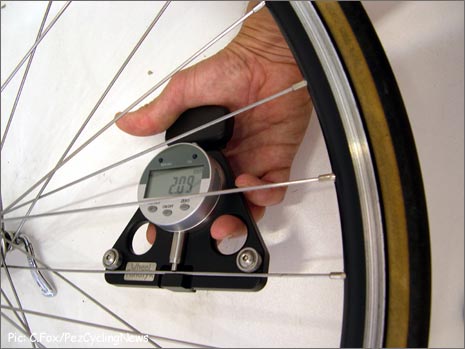 The price is $295 and can be painlessly bought online. Not exactly cheap, but I can’t imagine Hjertberg is getting rich here. He’s merely (re)providing an incredibly useful tool as part of his wheel building advocacy. Now, I can hear some of you complaining, “how can Mr. CheapOh push this kind of expense when you can just whack each spoke and true it by sound?” My defense: this tool will pay for itself after you build your 2 sets of bombproof wheels, it could even be a shared purchase amongst buddies/teammates or maybe you could offer a truing service on the side but most importantly, it’s the best tool on the market. One thing I’ve learned over the years: trying to make things with inferior tools or inexact methods is frustrating, time wasting and often a more expensive path than doing it right the first time. And that’s good CheapOh.

The Waxy Rag
I like to make my bikes shine with old school, car wax paste that you rub on, let dry and buff off (it also provides a nice nostalgia flashback of Turtle waxing Dad’s car as kid). It works equally well on steel, aluminum and even carbon (probably not a good idea for those matt black finishes). But waxing your bike often isn’t advisable because it builds up and quite frankly, who’s got the time? A handy tip is to always use the same soft cloth to buff off the wax , terry cloth hand towels work well. Over time this rag gets impregnated with the stuff. 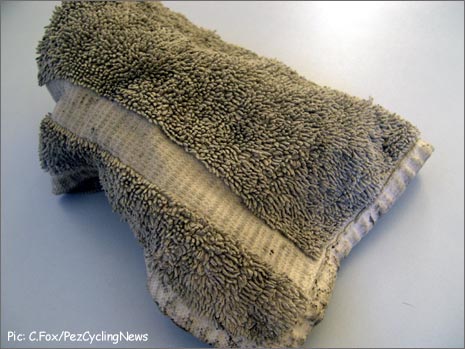 I use it between waxings, quickly wiping down the bike to restore a nice shine in a matter of seconds. My other tip is for heavy sweaters or leaky, acidic beverage drinkers: you guys should give a quick wipe down of your bike after every ride, even water (better yet with a drop of dish washing liquid) is better than letting things corrode.

CheapOh Bike Fit
Many, far too many cyclists are poorly positioned on their bikes. I am constantly amazed at the sight of rocking hips, buckling knees, weirdly pointing or unevenly leveled feet, irregular pedaling, inability to ride in the drops and so on. The more money one has spent on their bike and kit, the more absurd this comedy becomes. Yet, all of this can be sorted. Just because you’ve trained your body to accept these deformities does not mean that they’re healthy or efficient. However, the biggest problem is admitting that you’ve got a problem. 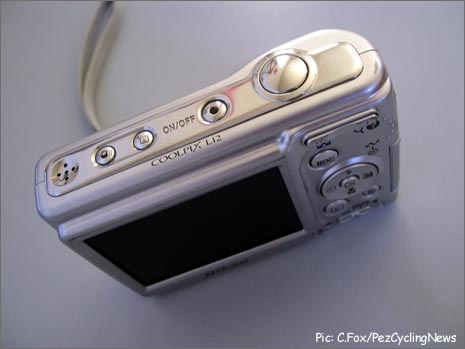 The CheapOh Bike Fit tip: get a buddy to ride behind you and make a little video from a digital camera when you’re not expecting it. Since we tend to get sloppier at the end of rides, a video after a couple hours of pedaling is more insightful. If you’ve got a pretty stroke, then great. Though I realize that many of us are oddly bent or asymmetrical, there are even solutions to account for this. So, either you can straighten out yourself with trial and error (with video proof, of course) or go to a professional. There is nothing you can buy that will improve your enjoyment or performance more than being properly fitted.

Bonus Half-Baked Opinion No.2: in addition to changing my position on stiffness (namely, that frame rigidity is overvalued and often overdone for most cyclists) I’ve lately come to believe that cleats with float are unnecessary. If you’re position is finely tuned in, then you shouldn’t have your feet wobbling around.

Touching Up Aluminum
Bikes start to look scruffy as they collect the normal signs of wear. Black anodized crankarms and stems and other aluminum parts look especially scruffy because the silver shows through. The quickest and easiest way to touch these up is with a black Sharpie marker – black paint would be too thick. Though this is not a perfect solution, it is much better than letting parts look shabby. 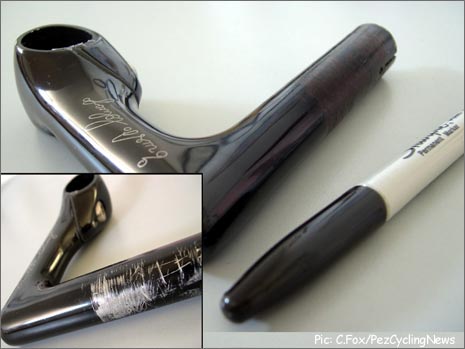 A before and after shot of an old stem

Touching Up Carbon
Carbon fiber shift/brake levers and carbon crankarms are highly susceptible to getting banged up and scratched. First step: light sanding (depending on how deep the scratches are) tooth paste for minor stuff and 1500 for deeper damage. Then, clear nail polish, more light sanding and a bit of polish is the best way to fix this situation. 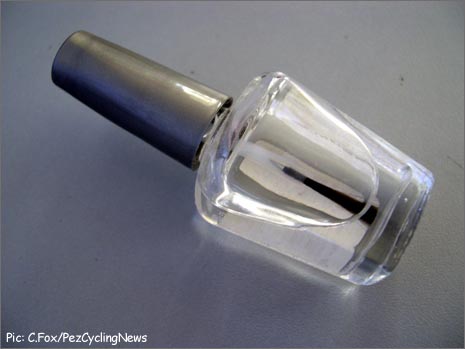 This is the best touchup tool for chipped carbon

Polishing Chrome with Aluminum Foil
I read somewhere that aluminum foil can be used to polish chrome – I tried it out and it does indeed work. It works best on lightly pitted or rusted chrome. For the heavy duty stuff, I use steel wool, but that puts lots of light scratches into the chrome that will have to be polished out later, while aluminum foil does not scratch up the chrome. Best of all, it’s dirt cheap, you’ve probably got some in the kitchen anyway. 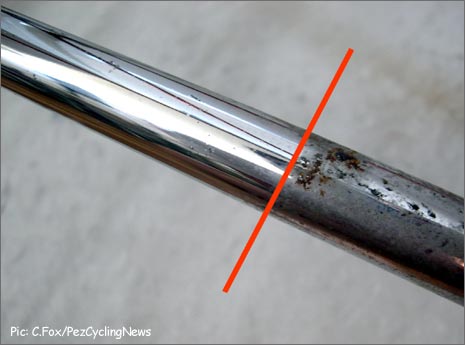 A before and after shot, the before is on the left.

Toe Strap Usage, No. 346: Pant Leg Holder
There seems to be a never-ending list of uses for old leather toe straps, depite being outdated since 1986. Let’s add another one: pant leg holders. I use my road bikes for city duty as well and have tried all sorts of strategies for tying up that pant leg so it doesn’t get in the chain, but the best one by far is the leather toe strap. 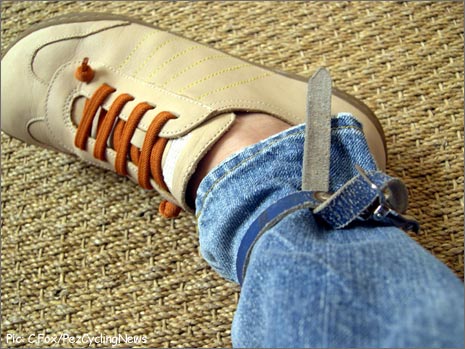 The mighty toe strap lives on.

CheapOhs of the world unite!