Just in – the world’s first look at a brand new – and very cool all-carbon speedster from Eric Van Bockern. You may recognize the name – Eric has been running our PEZ-French bureau for several months – but alas – his day job has kept him very busy of late – putting the final touches on the designs, overseeing production, and finally unveiling – for the first time anywhere – the EVanBockern Espirando. Only PezCycling News has the story…

“When I first thought of designing my own frame I thought the market was saturated with high end carbon bikes. But I pressed on and consulted with some of the finest craftsmen of our trade over the last 10 years. I couldn’t shake it off. The sizing and geometry from a lot of the industry leaders were expansive and often unbalanced. With the enhanced availability in high quality components such as handlebar stems and seat post cradles, the idea of distributing 3 semi-compact frameset sizes became alluring even for a custom sizing freak like me.

The Espirando’s steeper angled seat tube positions the rider a wider range of fore/ aft positioning – especially with the help of adjustable posts and seats. The front center (from the center of the bb to the center of the front hub axle) is a bit longer than average with the help a shallower head tube angle thus stabilizing the “turbo charged” rear triangle. The frameset featured here is a Medium and has a 5cm slope top tube. This gives you a generous head tube unlike other manufacturers where you have to stack your integrated stem ridiculously high and jeopardize the steering column’s integrity. A friend of mine once told me:”Remember, you don’t have a racing bike unless you can take your hands off the bars on a descent at 100km/h.” 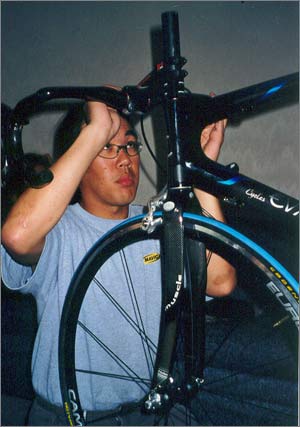 1. Ace mechanic Randy Villanueva of West Chester, PA. As a young tike, Randy took his training wheels off before any of us learned how to ride on two wheels. He’s been a pro mechanic all his life and I was honored to have him assemble the first EVANBOCKERN cycles frameset. Beautifully finished and reinforced at the 11/8” head tube and appropriately paired with a top of the line ti-laced carbon Columbus Muscle fork. 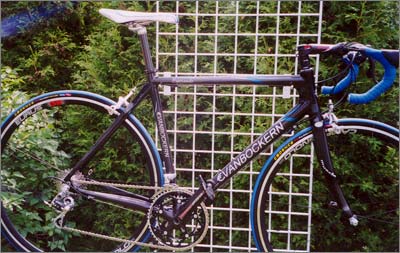 2. Espirando was inspired from a classical musical term expressing agony. The inspiration for the model name came from my family’s musical background and the desire to push yourself beyond your pain threshold in competition. The main monocoque triangle shown here responds efficiently to every pedal stroke since no lugs or glue are used. Those curves caught the eye of Team Health Net’s Gord Fraser, who is known for his yearning for the stiffest and lightest. At approximately 1100 gr., the Espirando is a high modulus carbon, seamless, homogenous structure with exceptional features of strength alleviating all of the slow and high-speed bumps deriving from the road. 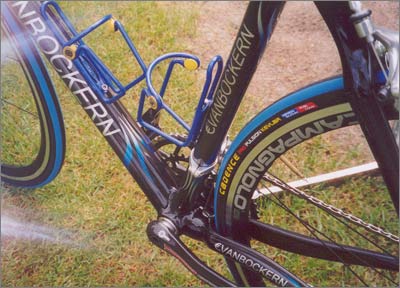 3. Check out the size of the bottle cage in proportion with that of the downtube near the bottom bracket. Pure power transfer! Note the swaged monobox chainstays and wishbone seatstays for superior lateral rigidity and road vibrations absorbency. 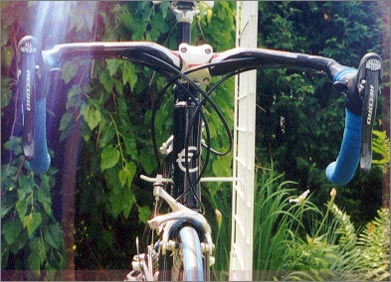 4. The headtube is elegantly fluted with a simple yet distinguished emblem.

Hey Eric – when can we get one for the Test-Bench? We’ll be sure to keep you posted!

For more information on how to obtain this dream frameset and soon to come, a track frameset, please contact Eric at [email protected]
(frame and fork only in a natural carbon finish with silver and metallic blue accents)