Altitude training is no longer just another a vertically induced hallucination, thanks to the guys at AltiPower. Their portable breathing device simulates high altitude oxygen levels, so you can condition your body to better process oxygen – without even getting off your couch.

Ever since a friend of mine (riding for a big US pro team at the time) told me about this new generation of hypoxic training devices, I had been eager to try one out. It’s claimed that intermittent altitude training improves speed, strength, endurance & recovery. 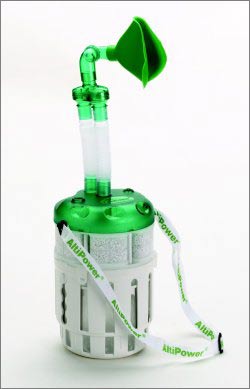 Some very high altitudes can be simulated – all with this easy to use contraption.

The theory is simple… by breathing extremely low levels of oxygen (O2) (i.e., a simulated 20,000 feet) for short intervals, or instead of spending the entire night sleeping at a moderately high simulated altitude of 7,000 feet, an athlete could get all the benefits of altitude training without any of the negative effects such as poor sleep and increased recovery time (due to the body not getting enough oxygen during its nighttime rebuilding phase).

What It Is
The Altipower Personal Hypoxicator is a small, portable device, costing about US $1000.00 (or $1,299 for the Professional model). They both include a breathing unit, an oxygen analyzer and 2 disposable cartridges, but the Pro model also includes a pulse oximeter which is useful for fine tuning your altitude training. It works by extracting the Carbon Dioxide from the user’s exhaled air. This removes the bad parts of exhaled air leaving air with a reduced oxygen content. The process forces your body to adjust to functioning at a lower oxygen level.

The overall design is simple and compact – perfect for taking with you if needed. Basically, it’s a small cage which holds a disposable plastic bag. Attached to the top of the cage is a disposable cartridge that contains a safe chemical mixture that extracts the oxygen from the air. On top of that, you attach a short breathing hose with a face mask on the end. It must be disassembled after each use, but it doesn’t take more than a few minutes to do this.

There are many related products on the market, some reaching upwards to $10,000 and higher. The AltiPower is small and portable. You can take it on the road with you and use it in any room in your house. Other hypoxic devices are huge and take up a large amount of space (like a tent). They can also be noisy because of the pump, but since the AltiPower operates on your own breath, it is essentially silent.

How to Use It
A typical hypoxic training session consists of one hour of alternating between breathing hypoxic air for five minutes and then ambient air for 5 minutes. The oxygen percentages change over time, and the protocol can be adjusted as well based on individual fitness and health.

At first, most users will want to start at a lower altitude to give their body time to adjust. After that, it’s just an hour a day for 10 days, sitting on the couch with a stopwatch or the provided sand timer. As a safety feature, the mask itself has no straps so you must hold it tightly against your face to keep ambient air from entering. Of course this means that you can’t really do chores around the house during your sessions, but AltiPower highly recommends sitting comfortably anyway. Some studies have suggested that the benefits are increased by sitting in a reclined (but not prone) position, and if a user feels uncomfortable, AltiPower recommends increasing the oxygen level or stopping the session altogether.

The session itself at first is actually somewhat challenging. I noticed a feeling almost like lactic acid build up in my legs and a sense of exhaustion for most of the day afterwards. However, after about a week, as I adjusted to the altitude and the handling of the unit, I found myself looking forward to the sessions. As a strong believer in various meditation and visualization techniques, I found the hour of rhythmic breathing to be rather relaxing.

According to the accompanying literature, during the first 8 days of use, you will experience a drop in performance because the hypoxic training places stress on your body just like any other form of training. After that, you should start noticing results with peak performance coming at about 2 weeks after you finish a course of training.

Those Best Laid Plans…
My original plan was to do a careful, detailed evaluation of my results based on power readings, lactic threshold testing and hematocrit levels. However, while these things may be useful in the lab or to a top level bicycle racer who has the ability to control every aspect of his life, the real world just isn’t so simple.

Soon after starting the test, I caught a bad flu after racing in Mexico and had to take almost 2 months off of training. I did another 10 day cycle but then I was starting from a much lower fitness level so all my numbers were lower than before the initial test. What I discovered (and I’ve been making this argument for years as a coach) is that there are just too many variables involved in life and in cycling to coach or to train based purely on empirical values.

So I realigned my study method to better suit my coaching philosophy, and evaluated the effectiveness of this device on a combination of factors including research, data and personal experience.

First the research. A lot has been studied and written on altitude training (just Google it to see how much), and without going into the science behind it, for this report we’re assuming that it has some benefits. Several studies show that sleeping in an altitude tent or doing intermittent hypoxic training will increase your body’s efficiency at processing oxygen. Everything I read indicated intermittent hypoxic training works.

Then my data. Although my threshold and anaerobic wattage were no higher than before I did the hypoxic training, they weren’t as low as I would have expected from almost 3 months of illness. In fact, they hadn’t decreased at all. The thing that changed most was my ability to recover. I attribute this to the illness as well as the strain the hypoxic training had put on my body. As time passed, this became less and less of a problem and now after more than two weeks without the AltiPower I am continuing to see improvements in power and recovery beyond what I might have expected from training alone.

Finally, there was the personal experience. I finally began feeling better by the middle of the season and was able to get two decent weeks of training in before the California State Team Time Trial Championships. I entered the 2 man open division with an equally strong teammate and we won the 40 km race by almost 2 minutes. The following weekend I headed up to the Mt Hood NRC stage race, one of the most notorious climbing races in the US. On the second stage I finished 12 in a pack sprint, a solid result for an out of shape amateur going up against teams from Health Net, Navigators and Symmetrics. Although I struggled on many parts of the race due to my lack of fitness, I did finish and I did feel myself getting stronger every day. I definitely did better than I would have expected after an extended illness.

So score 3 for 3. I believe intermittent hypoxic training works.

However, there are a few drawbacks to the AltiPower system. First, it is somewhat difficult to fine tune the altitude level that you are training in. During the course of certain sessions, I saw the O2 levels change by as much as 3 or 4 percent. I didn’t have the pulse oximeter but I’d imagine with that, you could compensate for these changes by adjusting the lengths of your intervals. Also, since the cartridges are expendable, they lose their strength over the course of a 10 day cycle so while the first couple days you may easily be able to reach 10% 02, by the end, it may be difficult to get it under 14%. (AltiPower confirmed they have since made a modification to the system which helps to extend the life of a cartridge by about 20%.)

The unit comes with 2 cartridges which will last you for about two months assuming a 10 day cycle and then a peak of performance arriving about 2 weeks after discontinuing usage. Additional cartridges cost $300 for 4 so if you plan on using hypoxic training consistently over several years, this might be a consideration.

And the system has not been without its share of controversy, as the guys at AltiPower reported…
• Last year a cyclist in Italy was arrested for using an AltiPower. It was viewed negatively under the new Italian laws against any ‘unnatural’ training techniques. The law is viewed as arbitrary by many, but few have the time, money or patience to fight the Italian courts over it. [Ed note: No word yet though, on whether they still allow athletes to live – and train – at high altitudes – or how this device is any different from that.]

2. Until September, it wasn’t clear where WADA stood on the devices. They have now come out and specifically said that this type of training is allowed.

3. Who wants to share a training technique than can improve you by 3-5%?

Interesting stuff for sure, and worth a look.

Josh Horowitz is a USCF Certified coach and an active Category 1 racer. For more information about his coaching services and any coaching questions you may have, check out his website at LiquidFitness.com
Like PEZ? Why not subscribe to our weekly newsletter to receive updates and reminders on what's cool in road cycling?