The dark nights are getting shorter, north of the equator, but if you want to go evening ride or you get held up at the office, more visibility is always a bonus – A bonus that might save your life. Leslie Reissner, our man in the winter darkness of Ottawa, has been giving the Lumos helmet a good test during those long Canadian winter nights and casts light on the functionality of this bright headgear. 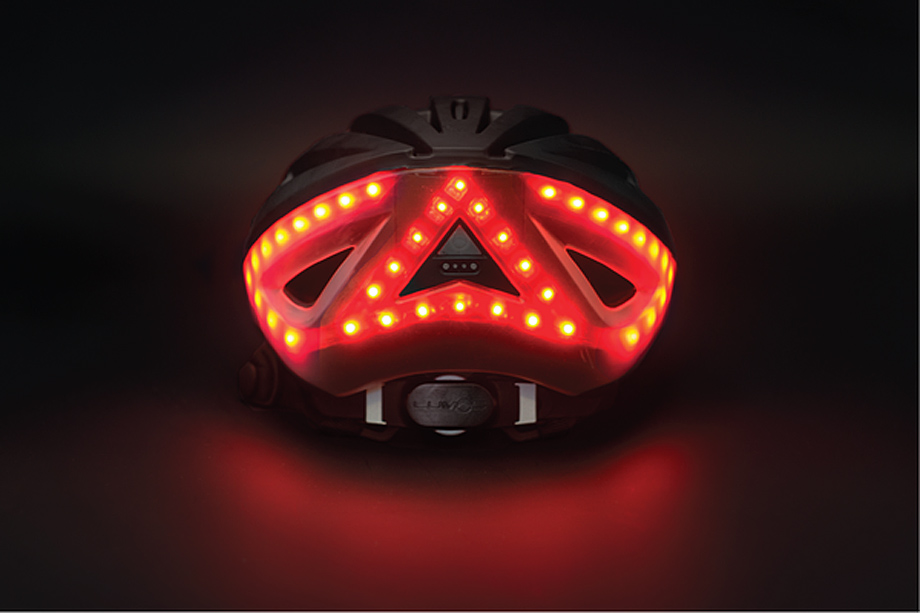 A few weekends back marked that transition when clocks are set an hour ahead as many places in the Northern Hemisphere attempt to catch that bit more of the sun, the mysterious golden orb in the sky that has been pretty absent (and so missed) for so long. Soon it will be time to get off the turbo trainers and head out onto the open road but there are some hardy types who were not demoralized by the snow, and the ice, and the darkness. And here is a brilliant (in every sense of the word) helmet for them. 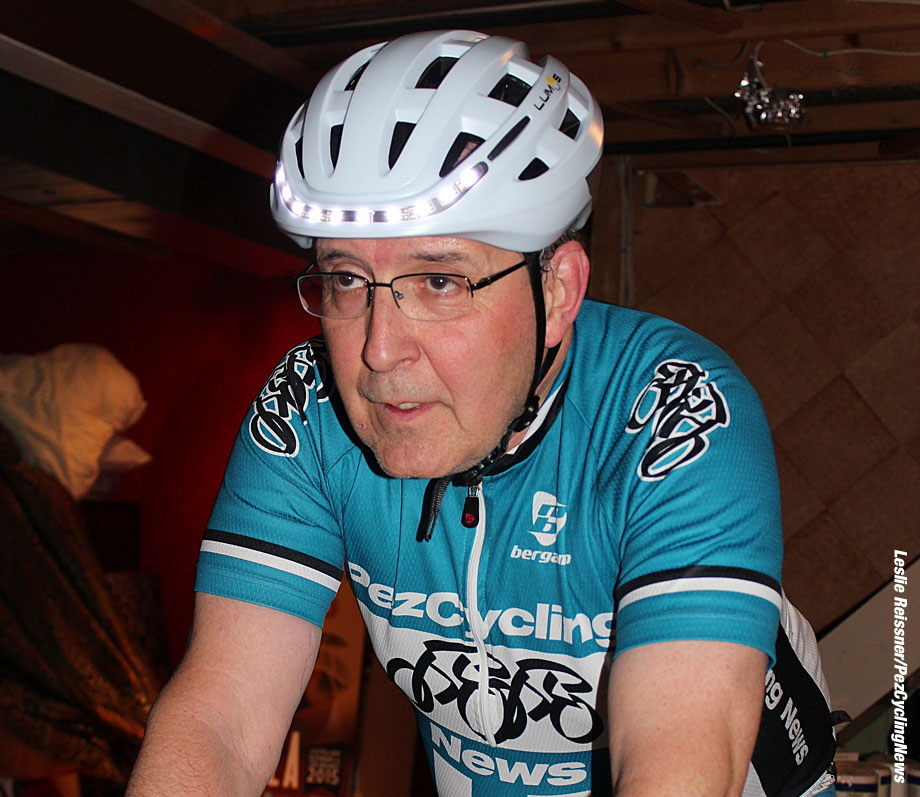 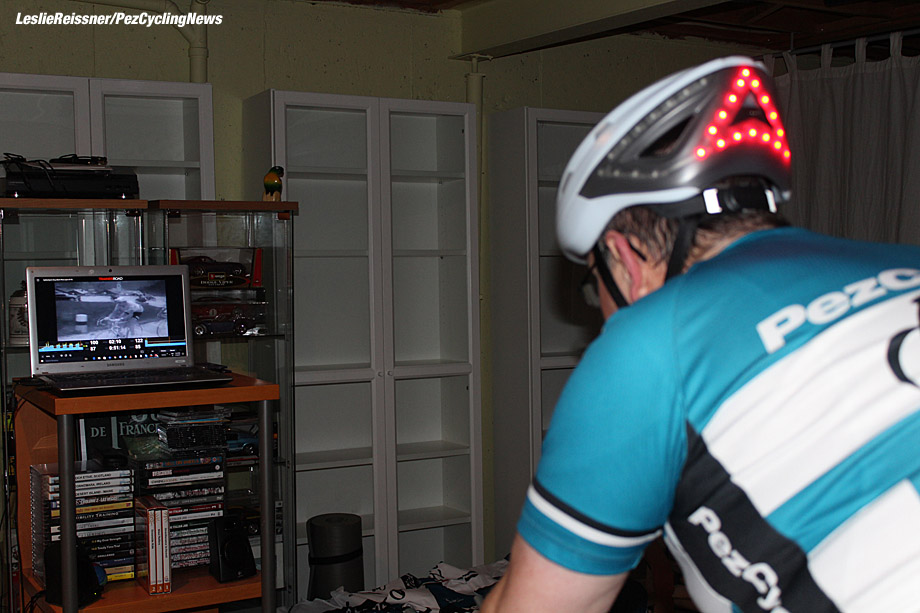 As a person who commuted all-season for many years I collected plenty of tough-guy stories. How I rode to work when it was -36C and the condensation from my breathing froze my sport glasses to my face; how I enjoyed sliding through crisp, newly-fallen snow that came up to my chainrings; how when I returned home I could not turn the lights off on the bike since I could not move my fingers in spite of the double gloves. Fun, or what? But at no time did I ever overlook the importance of making myself as visible as possible since motorists don’t really expect to see a cyclist in a blizzard and you need all the help you can get. I always wore a high-visibility construction safety vest, and reflective pant straps. The bicycle was equipped with two strong headlights and festooned with blinky lights on the seatpost, rear fender, and seatstays. A pedestrian I passed once remarked that he had seen me from a distance and thought I was an approaching police car. And although I witnessed some terrible driving, no motorist has hit me. 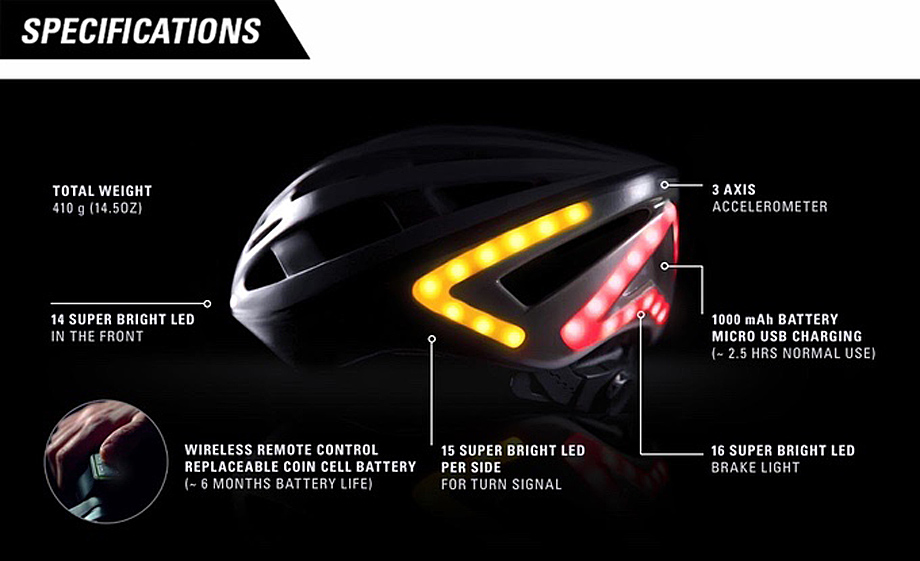 As we have remarked here, the Internet has made many cycling-related things possible, from mapping rides with a GPS to buying rare vintage parts on E-Bay to racing strangers on Strava. Crowdfunding has resulted in a range of imaginative products for us and one of these is the Lumos helmet. 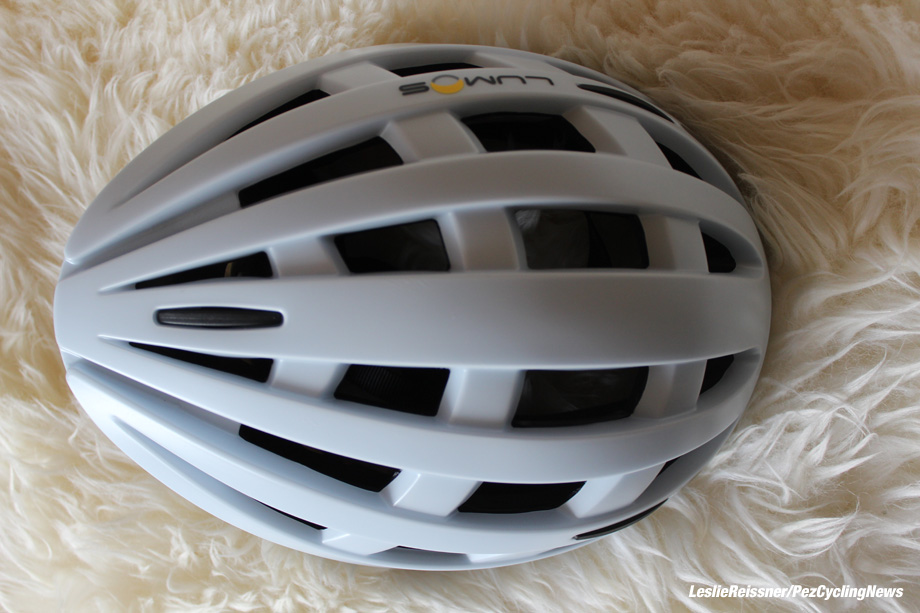 The idea came about during a weekend hackathon at Harvard when two engineers got talking about bicycle safety. Their idea for a helmet with integrated lighting became the subject of a Kickstarter campaign in 2015 which saw their goal of raising $125,000 instead bringing in $809,551 from more than 6,700 backers. But Eu-Wen and Jeff had already done their homework and a year earlier had brought in a cycling helmet industry veteran to deal with manufacturing so that, once proven, the Lumos helmet went from prototype to finished product rapidly. I became aware of it through an advertisement on Facebook (more Internet!) and was intrigued enough to request a test model to sample. Coincidentally, at the same time, tests have also been undertaken by the City of Ottawa where I live for municipal workers and policemen.

A large box soon arrived at the Pez Test Lab and I was immediately impressed by the packaging, the easy-to-read instructions and the entire presentation, which was informative but also personable. The helmet I chose was white, again for visibility, but it is also available in blue or a pretty dramatic-looking black version. First impressions were that it was very well-made and quite attractive; many people have commented on how good it looks. It only comes in one size but I found adjusting the helmet for a comfortable fit to be easy, whether I wore a neoprene headband under it in the cold or not. It is considerably heavier at 442g than the Giro Monza I usually use for commuting, which is 300 g, but the weight is not really noticeable and quite suitable for the purpose of the helmet, which is not a racing item. It does, however, meet the usual bicycle helmet safety certification requirements. 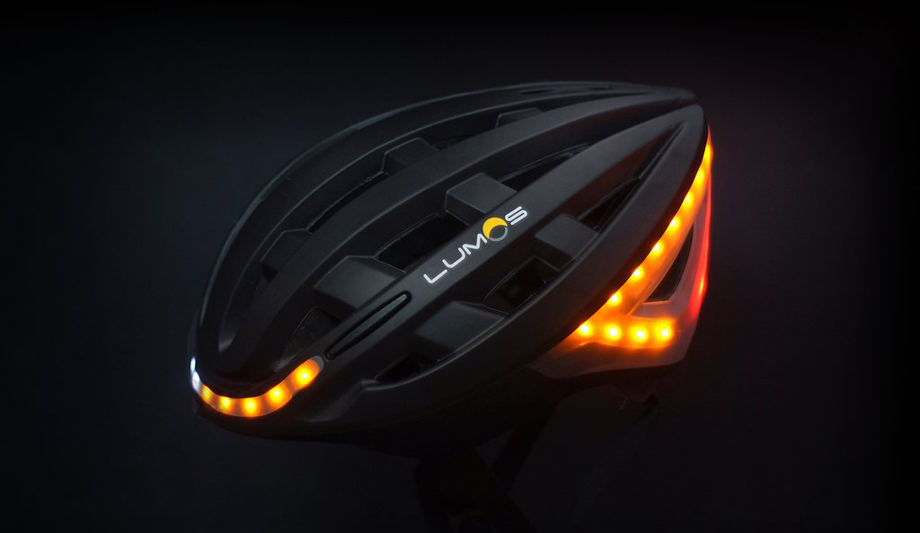 Where the Lumos really shines (ha ha) is through its 60 LEDs, with white ones across the front of the helmet and a pair of red triangular patterns across the back, similar to two of those slow-moving vehicle plaques you see on Amish buggies. By pushing a big button on the back, you can set the lights in one of three modes: solid, blinking or fast blinking. The battery is charged via a USB port and it is claimed that it takes 2 hours to fully charge, with the blinking mode letting you go for 6 hours and 3 on the solid one. With my short commute of 20 minutes each way, I never had an issue with charging. The LEDs are quite bright and I was surprised how much the front LEDs lit up road signs ahead of me. Nonetheless they should not be considered as substitutes for a headlight. Of course, the nice thing with built-in lights is that you don’t misplace them, forget to put them on the bike or have them stolen. Very convenient and I like that fact that the high position on your head really increases the visibility and safety factor. 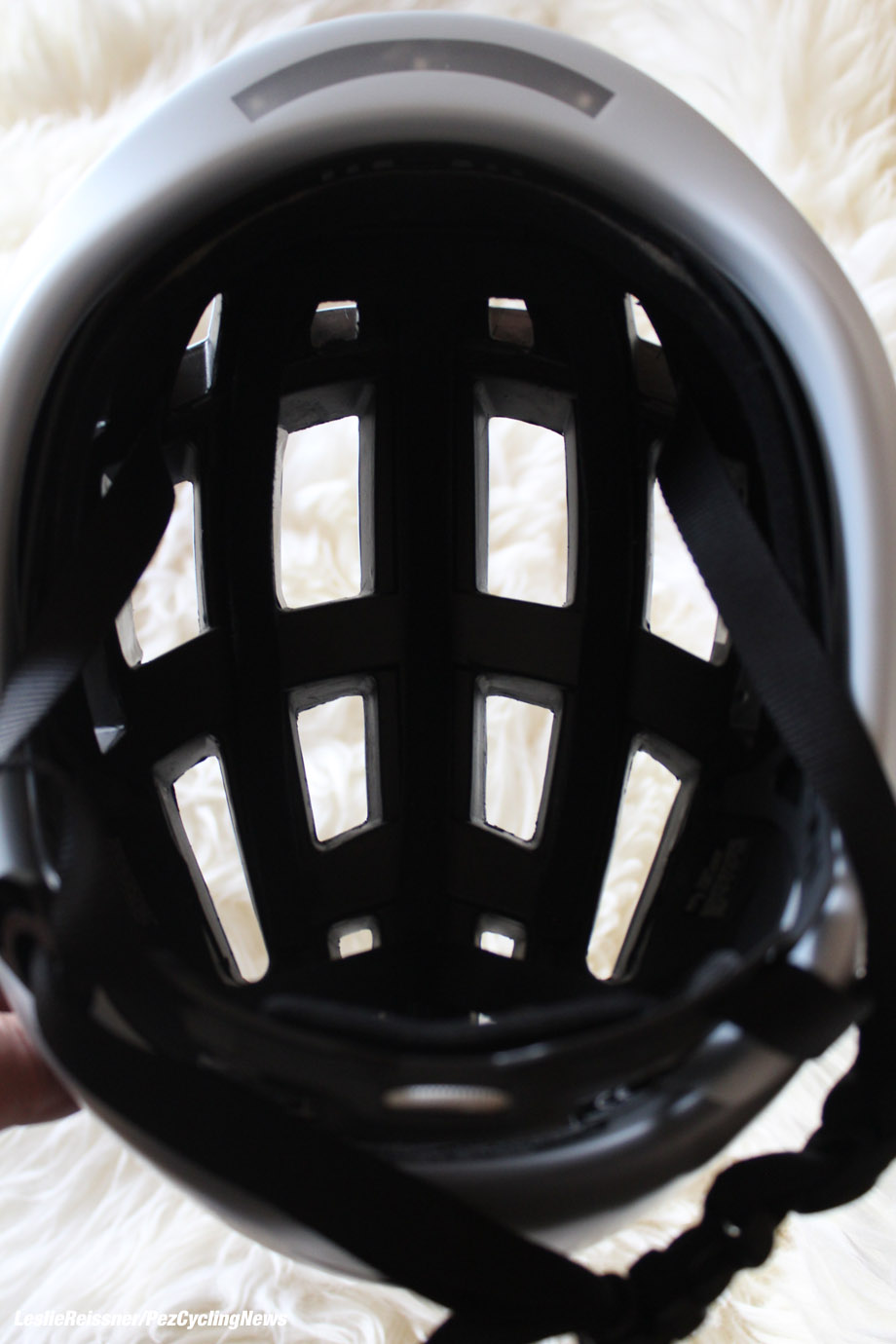 The real party piece of the Lumos is its built-in turn signals, which are operated through a switch you mount on the handlebars and which communicates wirelessly with the helmet. It has soft-touch buttons for “L” and “R” signals and can be operated easily with gloves. The unit, which is also USB-charged, attaches with rubber bands and I found it somewhat awkward to position on the flat bars on my commuting bike. I think that zip-ties, as are used for mounting some bike computers through slots, might be a better solution and provide more flexibility. 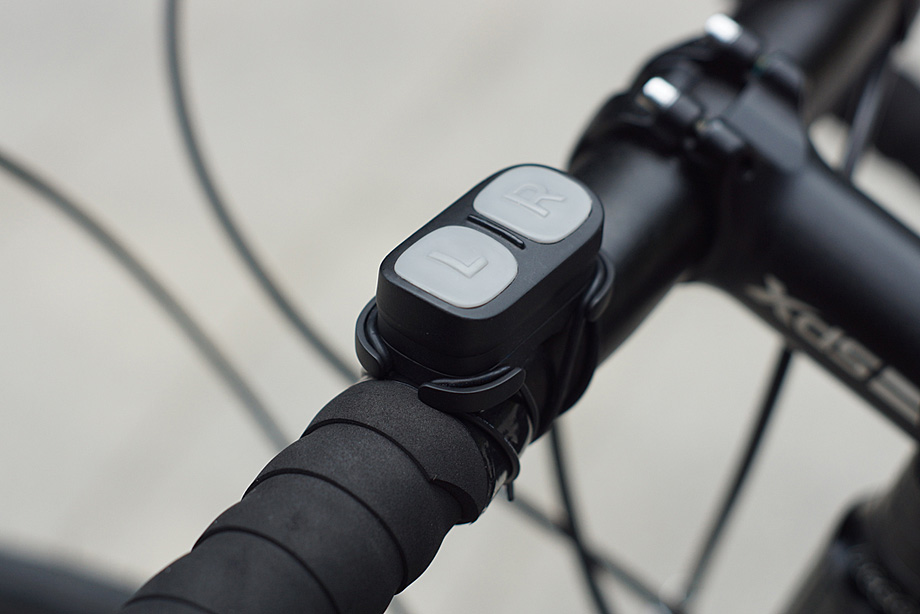 Of course, drivers can’t see you use hand signals in the dark but it is an odd sensation to signal turns with the Lumos. I felt ridiculous at first, knowing that the whole back of my head on one side was flashing when I pushed the “L” button. You can tell it is working as there is an amber LED along the front of the helmet which flashes in sync and this also reminds you to turn it off after you make the turn.

After a while I became enthusiastic about the button-pushing but I was not certain if anybody else was noticing my turn signals. Then one very dark night as I slowed to make a left turn, a car was about to pass when I turned on the signal. The driver immediately held back and I proceeded to make my turn safely. I think it must have been very visible but I hope that motorists, who clearly do not expect helmets to have turn signals, will get used to the idea. I overcome my shyness about pushing those buttons when I reflected on the fact that I wanted to be seen as much as possible: excess is barely enough! 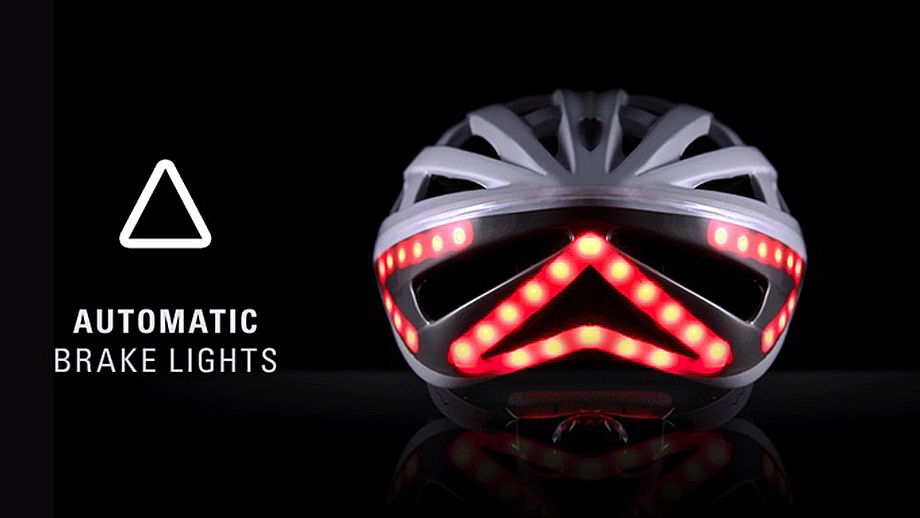 There is another feature of the helmet, an accelerometer which reacts to you slowing down on the bike and is supposed to brighten the rear lights as you brake but I have not tried this out. It reduces battery life and, frankly, I think the LEDs flashing are enough to put motorists on notice your are out there. Also, I couldn’t find anyone willing to ride outside behind me in the dark to see how it works. It is in “beta” so maybe more needs to be done with this. 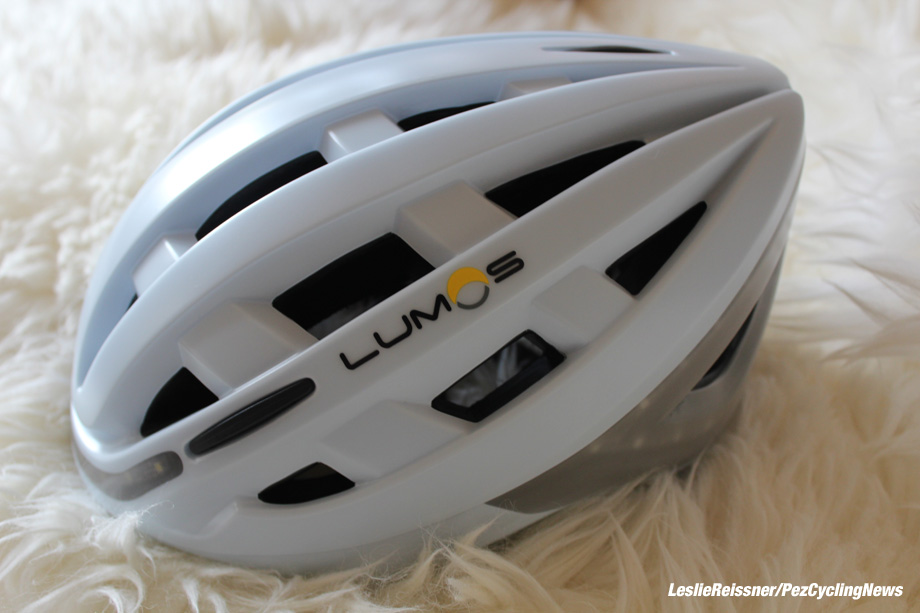 They say there is nothing new under the sun but I have to tip my helmet to the developers of the Lumos, a handsome and worthwhile addition to the cycling commuter’s safety repertoire. Their Kickstarter success was well-deserved and the resulting finished product, which has won design and business awards, and professional approach is a model for other Internet cycling entrepreneurs. And I will feel good about riding on the road when I put mine on again next week.

For more information and to order go to: lumoshelmet.co/

The helmet costs US$ 169.99 plus handling and the company will send them all over the world.

When not flashing on the shadowy streets of Canada’s capital, Leslie Reissner may be found wearing his Lumos helmet while riding his turbo trainer in the darkened basement at www.tindonkey.com