PEZ In The Trenches – Bikes Of The Masters

When we were down at Grenoble in the Autumn, we had a look at the bikes; up here in the frozen North we decided to check-out the machines of a couple of the “heads” who weren’t in action down in the “soft South.” Where better to start than with the “Capo’s” bike?

First In Wins, First Today: Bruno Risi
Bruno Risi has been loyal to the same style of Swiss-made Univega for several seasons now. It’s in over-size Easton aluminium with the top and down tubes altering in cross section along their length but having a constant diameter round seat tube. 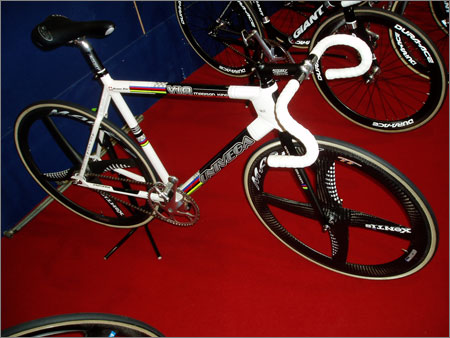 There’s a slight back-slope to the top tube, but it’s not pronounced. The head tube is heavily gusseted and made to appear as if it has been cut-out and a carbon liner inserted, but it’s actually aluminum painted to look like carbon. 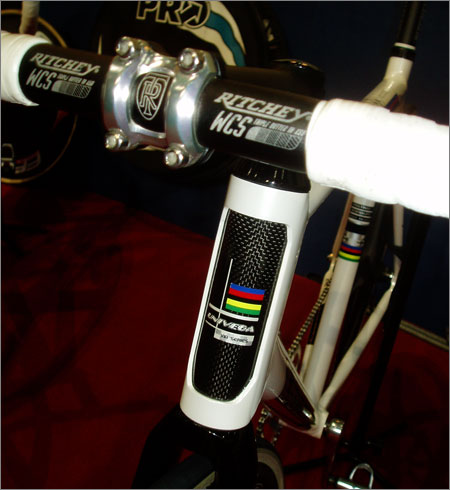 Chainstays are old-fashioned round section, flattened where they meet the bracket to give tyre and chainset clearance. The round section seat stays converge just above the rear tyre in a “yoke” detail which is made from square hollow section aluminium. 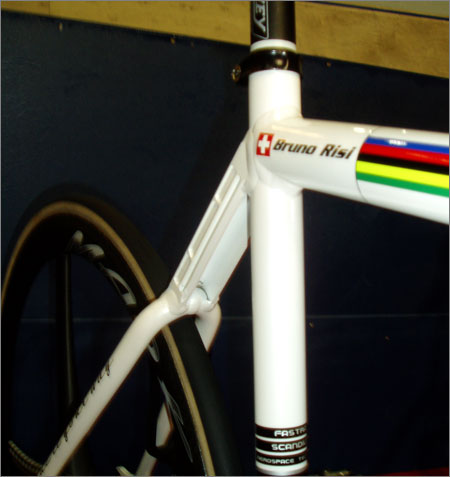 When I asked Risi’s mechanic about the effect of the gusseting and yoke, he rolled his eyes and replied; “show time!” The white paint job is a tad gaudy for me, especially the multiple worlds bands and “Madison King” sticker, even though it’s true. Forks are straight, black carbon but with an aluminium steerer. 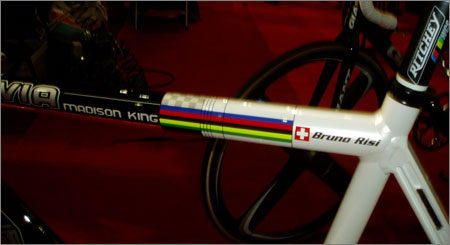 The rear track ends are extended to allow for different chainring/sprocket combinations without having to alter the chain length. Wheels are also from Switzerland – Xentis, the pro mechanics say they are very good, but it took five years to get them right. This included stiffening them up and ditching the industrial bearings they were originally running in favour of Shimano axles. 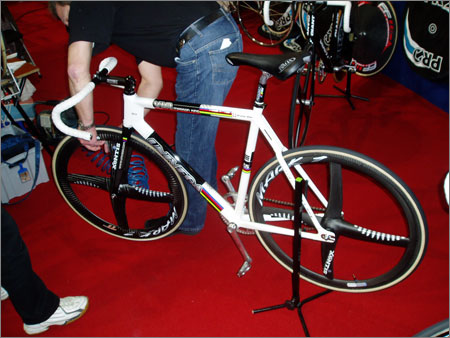 The wheels are all factory balanced, so run very smoothly. Bruno runs Vittoria Pista Evo CS rubber on the Xentis. Transmission is courtesy of Campagnolo with pedals like wise – “Pro fit plus.” Bars, stem and seat pillar are all by Ritchey with aluminium plenty light-enough to win seven sixes in a single season on. A Selle Italia Turbomatic 4 supports the Risi rear.

Young Belgian, Iljo Keisse
Home-boy, Iljo Keisse is loyal to Belgian’s finest – Eddy Merckx. Aluminium is the choice of materiel and again a constant diameter seat tube is combined with CAD top and down tubes. The tubing is by Easton, Sc 7000. 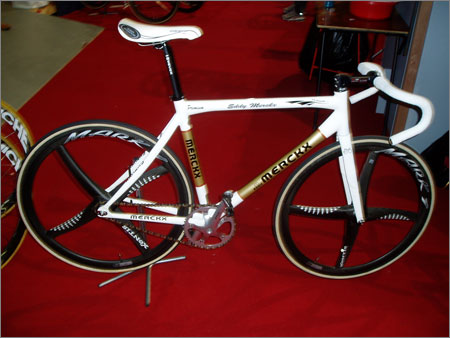 An old-timer like me would say that they were externally butted, ie with a larger external diameter towards their ends. This, coupled with the “concave” oval section seat stays gives the bike a curvy look which even the gentlest of radius on the front forks would have complemented.

To my eye the straight carbon jobs fitted clash with the other lines. Carbon the forks may be, but the steerer is aluminium. White is the main frame colour, gold panels shouldn’t work, but they do. Chainstays are round to oval at the bracket. The rear drop-outs are surprisingly short and embelished with Merckx logos. 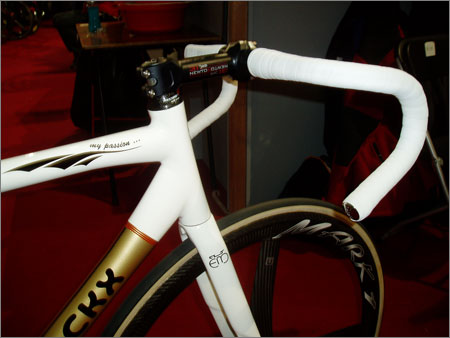 Wheels are Xentis with rubber from Continental. Cranks come from Campagnolo but pedals are those neat and light Look Keos. Alumium is again the choice for seat pin, bars and stem. The seat pin carries the Merckx logo, while bars and stem are Deda Newton. A comfy San Marco saddle in white goes well with gleaming white bar tape to complete the virginal look.

The Orangemen: Robert Slippens And Danny Stam
Whilst Bruno and Iljo have stuck with aluminium, Danny Stam and Robert Slippens have gone carbon with their beautifully turned-out Giant TCR Advanced’s. Even though it carries a weight penalty, Giant have gone for a clear lacquer finish to the carbon. 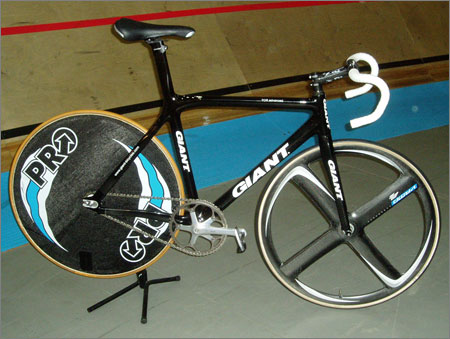 In the six day envronment, where a bit of “bling” is no bad thing, it works well, gleaming under the arc lights. Lines are flowing and clean, helped by a “fly through” seat tube with neat clamping arrangement under the saddle. Despite an aluminium steerer on the forks, bars and “hi-rise” stem are carbon too; by PRO. 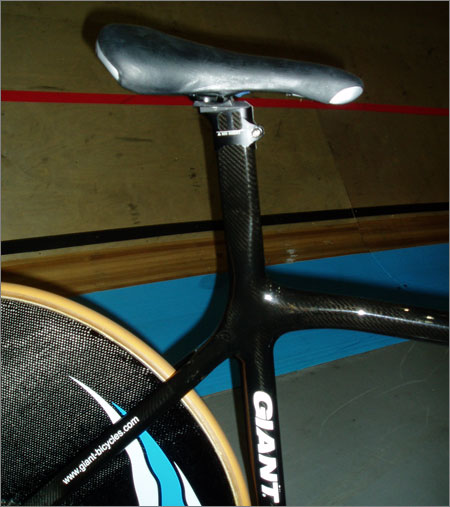 Whilst most riders go for cork or ‘bike ribbon’ type tape, the Dutchmen stay loyal to good-old 70’s pristine white cloth. Dura-Ace factory-built wheels do the spinning for the chases; for a 70’s guy like me, it’s still hard to get used to small flange hubs on a six-day bike, but they work well for Danny and Bob, whose six-day wins run into double figures. Rear fork ends are extended and very neat. 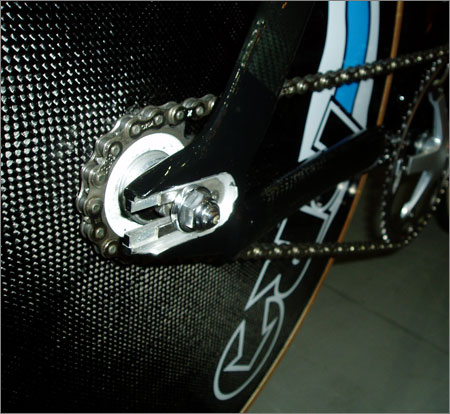 Rubber now comes from Germany – Continental. The Orangemen used to run those beautiful pink latex Dugasts – but don’t now, I best not say too much more; old Pez aint keen on law suits! Cranks and pedals are Dura-Ace and saddles are Selle Italia, Turbomatic 4’s.

So now you know what to buy; join the local track league and … 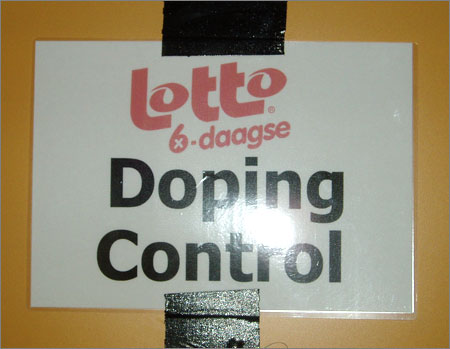 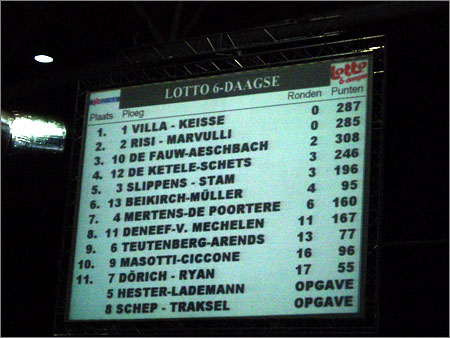 With one night to go (tonight), the race has turned into a duel between Keisse/Villa and Risi/Marvulli.

Travel: The Simple Pleasures of Eating