PEZ Mini-Tech: Reports From The Road

With the days cooling off and sunlight fading, my reduced ride time leaves a bit more for writing. And after some long summer miles on a variety of gear, here’s the long run news on DMT Kyoma shoes, Modolo Curvissima KX carbon bars, and Selle SMP’s Strike saddle. 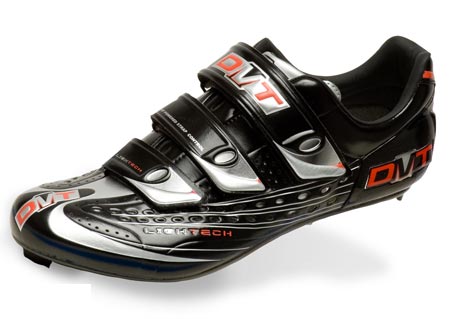 Italian shoemakers DMT have been earning some serious respect in the pro peloton, adorning the feet of several pros including Alessandro Petacchi. The Kyoma is similar to Petacchi’s “Flash” model, but features 3 velcro straps instead of 2 straps and a buckle. The one-piece seamless last is fitted to a light carbon sole, and with no internal seams to scratch your foot, this shoe fit me like a sock, and provided plenty of support and comfort. The sole is super hard (but not uncomfortable) – so I felt like my energy was going straight to the pedals. 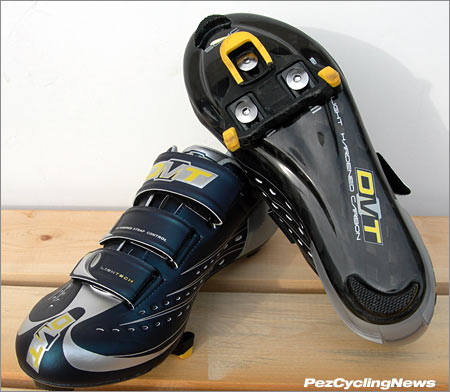 The shoes are roomy enough to handle my custom orthotics, and I only encountered a hotspot on one super hot 37C degree day. They’re not the best breathing shoes I’ve ever tried, but they’ve got enough holes that overheating was never an issue, thanks to the upper being made of Vamp Micro Fibre which reacts like a traditional polyester jersey to wick away moisture from the skin and transfer it to the outer layer. It’s also super durable, washable, and offers plenty of upper foot support. The heel cup is nice and high so I never felt like I would pull out of the shoe. The tongue is long, and a bit thicker at the top – mine took about a month of break in before it flexed nicely with the front of my ankle. I’ve been riding ‘em for 6 months and they still look new and feel solid and comfortable. 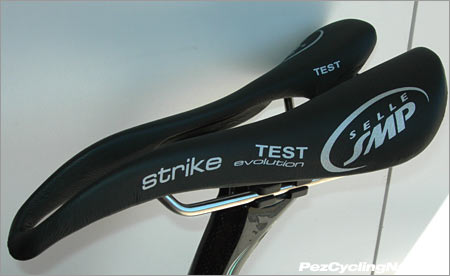 When it comes to matters of ‘amore’ – you can’t question the reputation of the Italians. So it’s no surprise that Selle SMP introduced their ‘Strike’ saddle for ’06 – designed to alleviate pressure on the – how do we put this delicately… ‘Johnson Nerve’ – which as we all know directly controls performance of the ‘Johnson Rod’. Recent studies suggest that too much pressure here can result in a ‘failure to launch’ in certain matters of… you guessed it- amore. 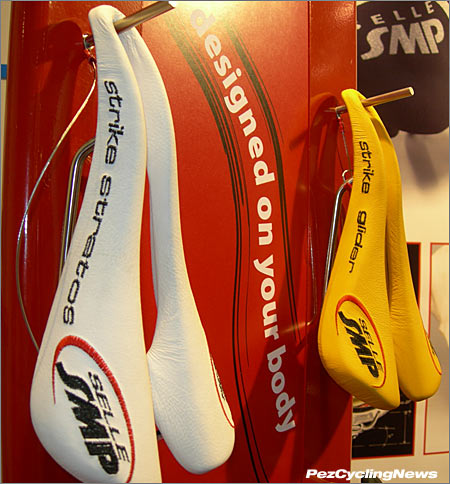 Everyone fits a saddle differently, but I found the Strike amazingly comfortable. I took almost no time to adjust to it, and the knowledge that I’d be better suited to serve Mrs. Pez after a long ride was just darn comforting. The rails are the longest I’ve seen – offering more than 80mm of positioning area. Our tester weighed in at 233grams, but a 165 gram carbon version is available, along with a few other models. Colors include black, red, yellow, and white.
• $239.00
• Go to Albabici.com
• Find a dealer: Albabici-dealers.com 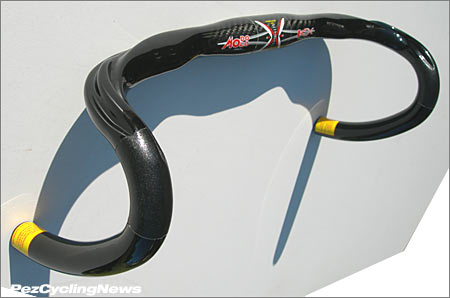 We first looked at these handles a couple years back, and I liked what our Tech Ed said, so I bolted a set on for myself and rode ‘em for a year. Finding the right bar shape is as important as finding the right saddle, and if you find stylish Italian curves appealing, this bar could be for you. The Curvissima KX’s take full advantage of carbon’s shape-ability, and there’s nary a standard curve to be found here. The tops are a fat, flat ergo shaped platform with plenty to grab when climbing or just cruising. The slope to the lever mounts is shallower than standard – allowing for a flatter platform leading to the levers. The drop is also more shallow, and with a more ergo-shaped curve. Deep grooves route cables cleanly from levers all the way around the backside of the bars to an exit point neatly in front of the head tube, and work perfectly with Campy levers, and quite nicely with SRAM (although the brake cables require routing on the frontside of the bars.) Their standard widths of 40, 42, and 44cm (c-c) are slightly wider than other bars of the same measure, making ‘em great if you like a slightly wider steering platform, and you can get ‘em in 26.0 or 31.8 clamping diameter. Weighing at around 195 grams, they’re heavy enough to be both light AND solid, but offer enough flex to be comfortable on long rides. I’ll say they’re still my fave bar – so check ‘em out.
• $359.99 each