Sometimes you just gotta do things your own way – wise words we live by hereat PEZ, so I was intrigued when Kurt Knock of Epic Bicycles offered me the chance to ride his own pride and joy – the Titanium road racer he designed himself and calls the Falcon.

I was also intrigued because in this day of “give me carbon or give medeath”, I thought it was high time I spent some more time with a precious metal roadster. It’s been a while since I threw a leg over a full Ti bike, so I was keen to see what the small builder from Duncan BC had to offer. 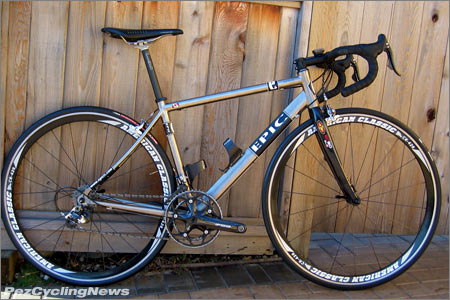 One of the beauty’s of the bike industry is that although the big guys battle it out for market share, the small guys can still compete on the same level when it comes to creative designs, quality builds, and ability to build stuff the big guys can’t. And again like us here at PEZ – the small guys do things their own way.

In The Beginning
You don’t hear many stories about guys making their fortunes in the “very lucrative” bike biz, but you do hear a lot of stories about guys who’ve made a name for themselves because they truly love bikes, and find a way to carve out their own chunk of the pie. Kurt Knock had ridden, raced, and worked in the retail side of bikes for years, and finally decided it was time to build a bike the way he thought it should be done.

His first designs a few years back were for mountain bikes, and it wasn’t long before local shops were selling-out their orders, and began asking for road bikes. Now, 5 years after he found Epic bikes, the sales of his road machines account for 90% of his business, so he must be doing something right.

Although early Epic bikes were built in the USA, Kurt moved production to Russia when he found a facility that better suited his needs for creative designs, top notch work and, of course, cheaper labor (that’s not a knock, it’s a business fact that we benefit from). Apparently all that experience building intercontinental ballistic missiles in the cold war actually did come to some good. The quality and workmanship on the Epic is quite good (and in a
previous life as the marketing guy for a high-end mtb brand – I saw a lot of handbuilt frames come to life). 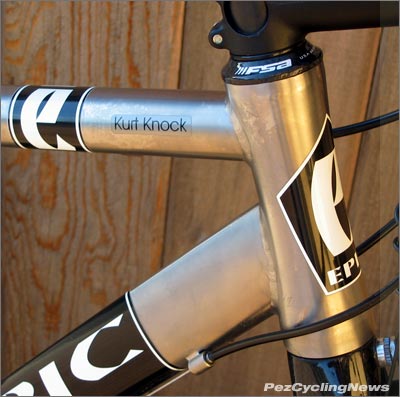 Up front things are obviously simple – no fancy tube designs or lug shapes. There’s a certain military-style precision that Ti comes by honestly. The compact-style geometry has been designed to reduce flex and allow quicker reaction to road & rider input.

WHY TI?
“I think titanium already offers the best characteristics to create the
ideal bicycles.” said Kurt when we talked in January. You can hardly blame the guy, he’s doing some good stuff with the uber-metal the proof of which was found firmly under my butt when riding one. 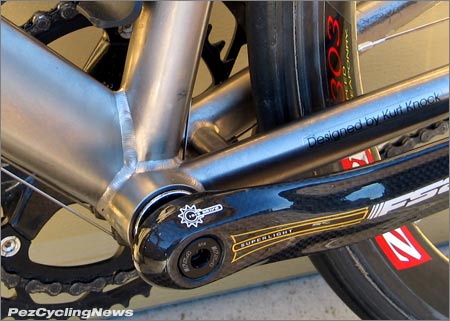 Big Strength at the BB with no extra fat: Kurt’s mtb background shows in the beautifully exposed welds. The junction of the tubes adds strength in all directions. I’m a 138 lb. Climber, so using my brute strength to wrench out a bb in a sprint is not something I can talk to, but over several rides with the Falcon, I did feel seriously connected to the drive train. The design features a lower center of gravity to confine the bike to a smaller arc when out of the saddle sprinting, and sends more of your energy to the drivetrain.

There are some that feel that Carbon Fiber makes today’s best frames, but this bike, for my size and weight really felt spot on. Heavily butted light Ti bikes might feel a bit flexy to larger riders, but I’m not a larger rider! The Falcon gave me what I like to feel – a smooth ride with a bit of snap (some might call spring) that made for great power transfer. 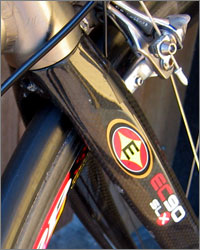 A nice match for a light frame with a bit of snap to it was the Easton
Fork. We really like Easton Products at PEZ, as they tend to be made so well that you don’t have to “worry” about them being Carbon and can simply depend on them being Light and durable. (We’ll have a Bar, Stem and Fork review up shortly.)

THERE’S LIFE IN THEM THAR TUBES
The first thing that struck me about the Falcon was the overall aesthetics – this bike really does look cool! The unpainted, brushed finish tubes let the raw appeal of titanium shine. Sure we’ve all seen this before, but why cover something that looks so strong and fast? Besides – weight weenies will love the extra grams saved by lack of paint. 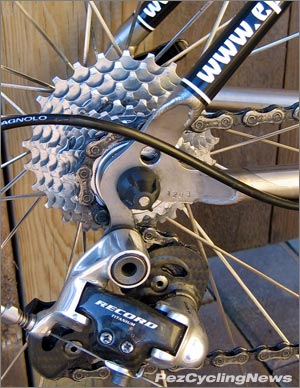 The test Falcon was equipped with Campy Record, Zipp 303’s, which contributed to the overall 14lb weight for bike w/pedals and also helped make the acceleration feel quick as a cat.

The second thing that struck me was the overall bike weight – I weighed it at just under 14 lbs with pedals. – which no doubt contributed to the fast response to my podiatric input.

This bike does what so many try to. It achieves great ride characteristics without marketing-driven design gimmicks. The tubes are simple; – the top- and seat-tubes are round, the down tube is “semi-aero” shaped to provide a stiffer ride and the chain stays are straight round tubes ovalized at the bb. The seat stays are plain round tubes that have a bit of a bend to help soak up the bumps. 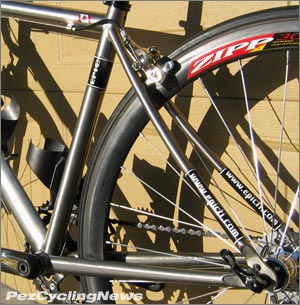 Nice Rear: Nothing fancy, just a simple design that works – the curved seat stays are about as jazzy as the Falcon needs to deliver a smooth ride. 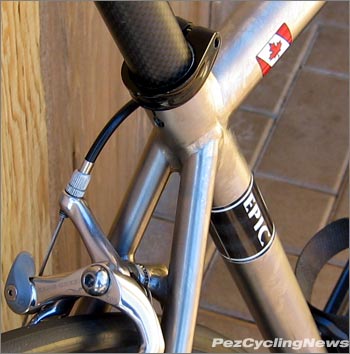 The Epics are a good quality build of a now- standard material. Design is no nonsense and the ride character is what you’d expect from Ti. A bit less butting in the tubes and that over-sized down pipe means a bit better power transfer and less flex than something like Lightspeed’s Ghisalo. Still, it’s a smoother ride than just about any Aluminum. It’s great as metal goes, but certainly not stiffer than other (lighter and very smooth) carbon bikes like the Scott CR1, Kuota’s Kredo or even Kestrel’s Evoke. But then again, they don’t fair impact as well in general and are also quite a bit more expensive.

The Epic is also a “boutique” name plate that you’ll not find on most street corners (yet).

What’s All This Gonna Cost?
Maybe the best part of all is the price tag – the standard sized Falcon frames (sizes 51 – 61) are priced at $1250 US. Custom builds start at $1350 and require a pretty detailed three page Q and A with options like cable routing, bottle cages, number plates etc.. Not bad at all. Forks and all components can be added as you wish. As we are huge “bike fit first” people, we wouldn’t bat an eye at another hundred bucks or so for custom.

What’s next for Epic? The creative fires that caused Kurt to start the
company are still burning, and driving him to look at new designs to answera wider variety of customer requests – so keep your eyes peeled for more from this up and comer.

Get more info on Epic at their website EpicTi.com and take a look at their new super light 13lb Project 13 race bikes.
Like PEZ? Why not subscribe to our weekly newsletter to receive updates and reminders on what's cool in road cycling?