Sufferfest videos’ use of actual pro race footage, variety of sessions, and heavy doses of humor are great motivators through the dark days of winter. I checked out their latest training video, ‘The Wretched’ as part of my winter training regime and found it wasn’t quite what I expected.

Two months ago I experienced Sufferfest’s videos for the first time when I tested their ‘There Is No Try’ video and now I’m lining back up for more, I must be a lover of suffering I guess. In fact, since that last test I have suffered more than any man should clocking up the 7th overnight visit from the mother-in-law in 7 months of living in my new house. Yes, with such suffering credentials such as that the PEZ didn’t hesitate to pass me Sufferfest’s latest video, ‘The Wretched’ (This one’s just begging for a mother-in-law joke, but my wife may read this so I’ll refrain).

The Wretched is different from Sufferfest’s previous videos but still keeps the basic premise of using actual pro race footage, quality editing and music with heavy doses of humor to get you through a great workout in a limited time. The difference in this video from previous ones though is that the first time you do it, you have no idea what you’re going to get – there is no structure. No 3×2 minute intervals followed by rest, followed by time trial etc – it’s all a surprise! 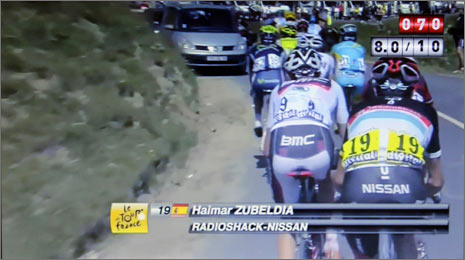 Flats, mountains, transition stages – it’s all a surprise in ‘The Wretched’. What doesn’t change though is the great officially licensed Tour de France footage that puts you right in the action.

The Outline Of The Video
The premise behind the video is that our ‘star’ (ie: you) has fallen from Local Hero to Zero. You were the best, everybody loved you but you’ve slacked off, got lazy and even got fat, but now it’s time to fight back and once again become the rider you know you can be. Faced with the final stage of the Tour de France, you need to remember how to suffer and race with more courage than you’ve ever done before.

Apart from the 7minute warm-up and 4 minute cool down to this video, there is no structure, it’s just like a real road race, anything can happen at anytime and you don’t know what’s around the next corner; flats, attacks, climbs, descents, sprints? It’s 35 minutes of madness where your senses are going into overload as your heart rate is climbing as you respond to attacks then you ease off when they tell you to, only to have to go again when some amateur attacks… 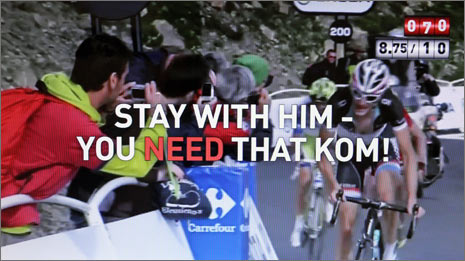 Franck Schleck on the attack… but I had him covered.

The premise sounded good, since I am training for a real road race afterall so what better way to practice for it than a real race simulation against the best in the world like Voigt, Voeckler, Contador, Evans and co. using footage from the 2011 and 2012 Tour de France. 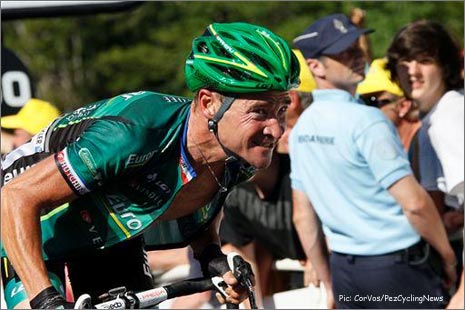 Some of the footage in, ‘The Wretched’ is from this classic stage in the 2012 Tour with Voeckler & Voigt suffering in the break. Motivating stuff!

Ok, Let’s Saddle Up And Try
With a little trepidation after reading Sufferfest’s recommendation of ‘Get the bucket ready’ for what promised to be a brutal and painful workout, I hooked up the hard drive to the TV, saddled up on the trainer and pedaled off into the unknown as I prepared to take on the best of the best at the Tour de France.

The warm up passed well with some large doses of Sufferfest humor setting up the ‘From Hero to Zero’ theme nicely and by the time the 7 minute warm up was over I was feeling confident and ready for anything that could be thrown at me. Afterall, it was only 35minutes, how hard could it be?

And They’re Off
What happened next is suffering in its purest form – and had nothing to do with my mother-in-law planning her 8th visit to my house (yes, an unfortunately true story). This was simply on the bike hurting at its best with the pain screaming at me from everywhere, my lungs were burning, legs screaming but I had to keep going as I wanted to win!

The onscreen commentary with its humor and the clear stand up and take notice sound effects guide you through this workout which is exactly like advertised – a pure, attacking, climbing & fighting Tour de France stage.

Rather than look at more pictures of my screen check out this quick video for an example of some of the action featured in ‘The Wretched’.

Over the past 2 weeks I’ve managed to complete this workout 4 times and despite the fact that I’m getting to know what’s around the corner, there is still a real element of surprise to it as I’m guessing my level of suffering during the videos greatly affected my memory. Some of the songs from the upbeat music track stuck in my head but not the order of the attacks or the intensity, so it was kind of cool to still have somewhat of an element of surprise in my workout each time I did the video.

The Wretched is available for $13.99 and there are also a number of discounts available for bulk purchases like their 3 pack starter kit for $31.99 that includes the classic videos Angels (Climbing), The Downward Spiral (Ultra High Intensity Intervals) & The Long Scream (Time Trial). Or for the seriously sick & twisted who want even more suffering in their life, the 12 pack will give you every possible workout you could need for $119.99.

I now have 3 videos in my collection and although the unpredictable nature of ‘The Wretched’ has made it my new favorite I’m going to mix it up between the three to keep my workouts fresh. I’d recommend this particular video to real racers rather than just the ‘get fit brigade’ as it’s all about beating the others, pushing yourself just that bit more to get the glory, and that’s what any real racer needs to work on.

Riders that are perhaps not so keen on indoor training would be well served too with this latest Sufferfest video as the music, footage and on-screen instruction are highly motivating and give a great workout – especially on a bang for buck ratio. Nothing else you do for under $15 is going to increase your training intensity as much as this. I’m going to continue to use this video and the others as I continue my preparation for the ever approaching 2013 season and hopefully they will help me claim a few victories across the continent this year. One thing’s for sure, I’ve already shown Voigt, Voeckler & co. a thing or two about how to ride a bike in my living room.

• Get yourself a copy here at www.thesufferfest.com along with more info on Sufferfest’s other videos, clothing and more.