PEZ Review: Sufferfest, ‘There is No Try’

We finally lined up our man in France with a product test and it almost broke him. The Sufferfest training videos are legendary here at PEZ and their latest video that uses officially licensed footage from the Tour de France ’12 is no exception.

Eight years is a long time. Eight years could be the length of the average pro’s career or maybe even the length of the average Hollywood marriage – although that’s probably pushing it by a couple of years. For me, the number 8 stands for 8 years of writing for PEZ. In that time I’ve done everything for the site, from roadside reports at big one day classics & stage races to writing EuroTrash, interviewing numerous pros, editing articles, PeloPics and more. In fact I think I’ve done everything possible on the site except for the Holy Grail – the product tests. 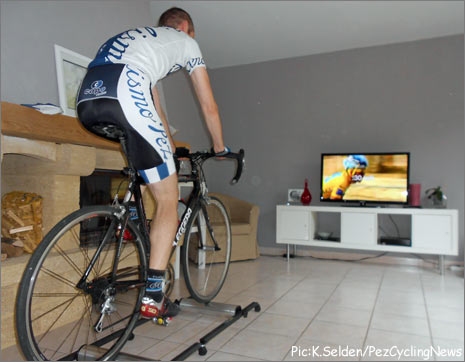 Seldo reluctantly saddled up for this test.

I’ve dropped hints to the Pez for a number of years about what I could bring to the product testing team but alas not one little product has come my way – not even a waterbottle cage! It was with great excitement and anticipation when Pez recently let me know that he was finally lining me up for a product test – what could it be? A set of wheels? A helmet? Shoes? Or maybe a bike?

Well, unfortunately ‘no’ is the answer to all of those. Pez instead wanted me to test Sufferfest’s latest training video for the indoor trainer. Was he serious? What had I done wrong? Did he not realize that I HATE indoor training and had absolutely no desire to use said product?

The trailer for Sufferfest’s latest video, ‘There is No Try’

Indoor training has always been a pet hate of mine and I was doubtful that a couple of videos of some Tour de France stars would change my mind. For me bike riding is all about the getting out into nature aspect of it, enjoying the scenery, chatting with friends and then maybe kicking their ass at the town limit sprint or KOM point.

Clicking on Sufferfest’s website though I was greeted with their motto of ‘I will beat my ass today so you can kick yours tomorrow’ and I liked their thinking, maybe this could be for me after all?

All Great Comebacks Start Somewhere
I had a good browse through their website and the various videos on offer and although this review is more about their latest ‘There Is No Try’ video using footage officially licensed from the Tour de France, I wanted to check out some of their earlier stuff first – and it was their ‘Angels’ climbing video that grabbed me the most.

There was a time, 8 years ago or so I guess (there’s that number again) when I was racing in Europe at a good level and was somewhat of a climber. Unfortunately the years pass and with no serious racing since 2004 except the odd, very short lived comeback here and there my climbing has understandably suffered horrendously.

With a new team lined up for 2013 in the South of France, and a perhaps misguided idea of a proper comeback as I approach the dreaded 40 year mark, I recognized that I needed help. My laziness reasoned that a 1 hour session of climbing simulation designed for improving handling repeated changes in tempo would be a perfect start, and after all how hard could a one hour session be? 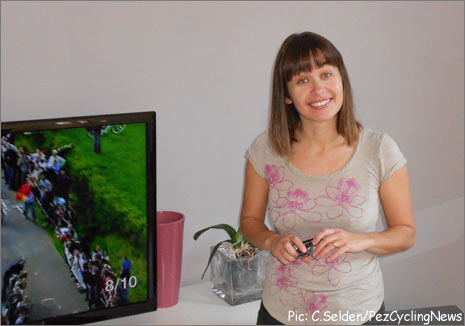 My photographer for the occasion and clearly a lover of seeing me in pain, my adoring wife.

So I downloaded the video from www.thesufferfest.com ($12.99), dusted off my rollers (had to find them first!) and hooked up the hard drive to the T.V so I could watch all the action on the big screen and enjoy the music with the surround sound. The warm up started with a series of “over/under” intervals and had me sweating but still enjoying the action. My wife was recruited as official photographer for the occasion with the idea that she would take a few photos at the start of the session whilst I was still looking good and then she could go back to her business and leave me alone with my suffering.

The warm up came and went with cool footage from inside the peloton (in this case track riding) and yet my wife was still there by my side, perhaps attracted by the good music? Or perhaps she likes to see me suffer?

Next on the agenda was a series of three, 8minute climbs that had me absolutely groveling, and my wife’s smile growing. Thank you Sufferfest for showing me that my wife is sadistic. She especially liked yelling out the on screen encouragements at me in her cute French accent that made the funny and yet motivating commentary even funnier. 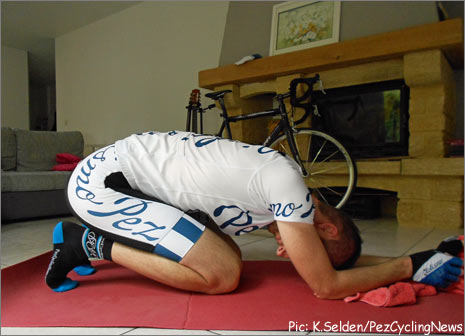 By the end of the hour long session, I was literally on my knees, having done probably my most effective training session in years (8 perhaps~).

So with my ‘trial’ video out of the way it was time to rest and recuperate before testing the new ‘There is No Try’ video. My perfect opportunity to saddle up and try, sorry I mean – do, the new video came just 3 days later when a rainy and cold day dawned outside and my wife was away.

The first thing that hit me with the new video was the production quality – it was superb. Not that there was anything wrong with the Angels video I had done a few days previously but the production values, graphics and music have all taken a step up in quality.

This video was a different style of workout from the Angels video in that instead of working on my climbing, this was all about speed – another quality that I sadly lack these days. I’ll let the blurb from the Sufferfest website lay down the idea behind this video for you:

Getting faster is what this video is all about. Here, you come face to face with Sufferlandrian intervals. You see, Sufferlandrians get faster when other cyclists get tired. And, so, our intervals do the same. It works like this: Every interval is broken into four parts. Each part is faster than the previous. You usually finish with a sprint.

Featuring, for the first time anywhere, officially licensed footage from the Tour de France, you’re going up against the world’s best cyclists. There is No Try features legends like David Miller, Bradley Wiggins, Jens Voigt, Peter Sagen, Fabian Cancellara, Christian Vande Velde, Mark Cavendish and more. You can’t just try to beat them. You Do. 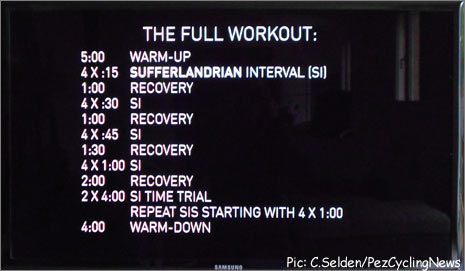 The schedule for ‘There is No Try’ goes like this.

So with the research done, I once again saddled up for the ride but I was determined not to end on my knees like last time.

Once again the music hit the right notes with me, with the faster songs/beats being timed perfectly for the harder intervals to help me keep the pace up. The good music was combined with the sound effects of screeching tyres, starting gun and a revving motor which when heard are the cues as to when your efforts stop, start or increase in pace.

On screen all the instructions are clear and precise, including cadence recommendations and most importantly the ‘Suffer Scale’ – how hard you should be pushing yourself in each interval based on a 1 – 10 perceived effort scale. 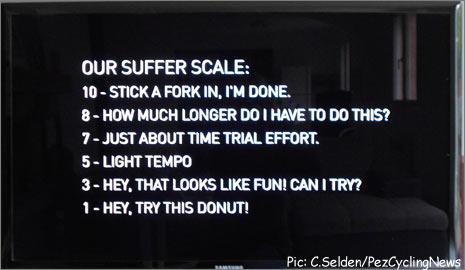 There’s also more of the Sufferfest brand of humor to encourage your efforts, like this one when Thibaut Pinot attacks: 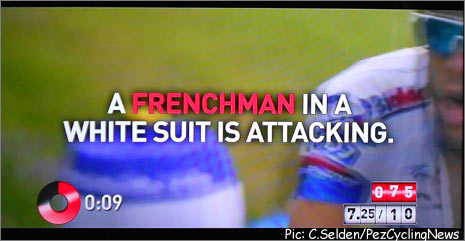 and they just egg you on to bring him back; 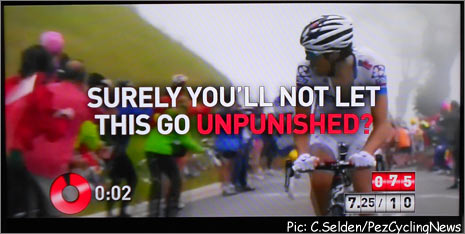 The video ranges from flat stages at the Tour, to transition stages and mountain ones with each getting the Sufferfest treatment of humor, great race footage and a seriously tough interval session. The ‘easy’ sections of the video in between the intervals use footage from some superb criterium racing with on-bike footage that kept me interested in the video and helped me to ignore the pain I’d just put myself through.

Summary
I have to admit that I was pleasantly surprised by how good the videos are. Not knowing what to expect and being a confirmed hater of indoor training I didn’t think that I would like these workouts nearly as much as I did (in a sick and twisted sort of way that is). For both videos I was pushed to my maximum and I know that I would never have done even half the workout I did if I didn’t have the motivation from the videos to do it.

It wasn’t just the race action, slick music editing and the funny although sometimes cheesy commentary on screen though that gave me those workouts (although they all helped), each video is based around a well thought out interval session.

The new There is No Try video is available online now for $13.99 along with all the older Sufferfest videos which range in price from $7.99 – $12.99 making them a very cheap way to turn your indoor training from a bore into something much more interesting. As winter approaches and even more worryingly the start of the French racing season 2013 getting ever nearer I’m going to step up my indoor workouts using a combination of a few of these videos. They’re certainly never going to replace outdoor training but for those looking to escape the cold or time poor cyclists looking for a quick and effective workout, you couldn’t do much better on a bang for your buck ratio.

• Get yourself a copy here at www.thesufferfest.com