When The Pez gave me the call to review some kit, he knew that the mention of tartan would get this proud Scotsman onboard! Impsport’s clothing range for the Braveheart Cycling Fund, a charity aimed at supporting and developing the next generation of Scottish peloton heroes, was duly sent north for a rigorous examination!

The theory is that the Braveheart Fund’s tartan design helps people to invest their cash in the Fund’s aspirations, a tangible project and in an emotional tie with the country. A donation from each garment goes to the Fund, and by wearing the kit, it helps to publicise the initiative more widely. But that’s only going to work if the kit is up to scratch. 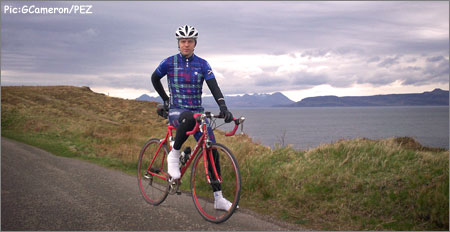 In terms of materials and production quality, this kit is Impsport’s standard issue – it’s exactly the same as that used by the teams they supply top domestic teams such as Plowman Craven/Evans Cycles and Science in Sport, and by Braveheart-funded riders such as Commonwealth track medallist Kate Cullen when she rode the World Cup track pursuit series.

When Impsport developed an award-winning process for a streamlined online ordering service that would help groups like the Braveheart Cycling Fund to produce pro-level kit that could be sold to raise cash, I think the result is what business people call a ‘Win-Win’ situation. 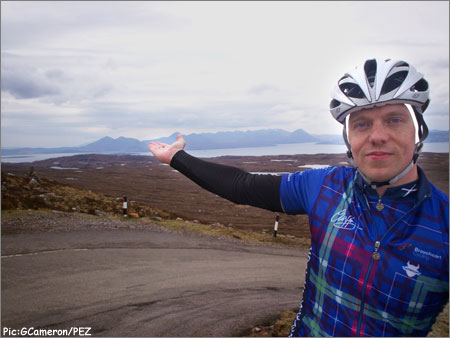 The company, at their 20,000 square foot premises in Lincoln, England, produces visuals and works up sample garments to be photographed and listed for sale on their website.

This means that the Braveheart Fund, and other charities the company works with such as Action Medical Research and the Geoff Thomas Foundation, don’t need to outlay any cash on stock. They simply approve the visuals, and the templates are then ready to produce garments in the required quantity. So a team or club can put in a minimum deposit and get their kit for the season in the winter, and then simply buy one-offs, made-to-measure, later on if they need to replace crash damaged stock. And if a jersey design, logo or sponsor changes … well, it’s just a case of tweaking the design. No-one is left trying to flog off dozens of spare jerseys at the end of the year. 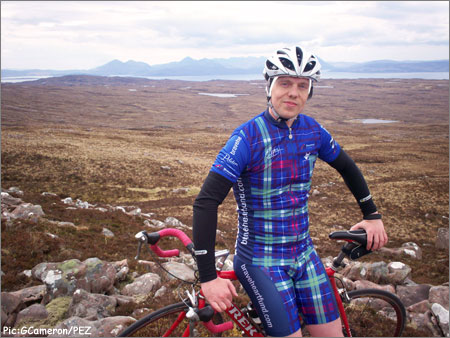 When you go to the website and click ‘Buy’, a 21-day turnaround time gets you a made-to-order garment, produced on site in the UK, using top quality materials. And there’s no work involved for the Braveheart Fund either. They sit back and get the donation as soon as someone buys from their line, and they have no stock storage or mail order lay-out. Did I say ‘Win-Win’?

So, What About The Kit? 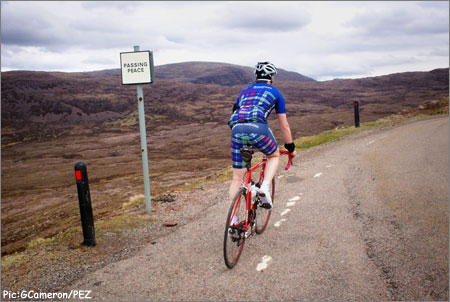 Shorts
You won’t get very far if you’re sitting as uncomfortably as an NFL coach with an 0-8 record, so it’s just as well that the bib shorts tick all the right boxes. They’re anatomically cut, super comfy and offer an excellent fit with no hint of any awkward chafing – vital info for anyone about to pull new kit over their precious regions!

The Polyester/Nylon/Elastane blend is breathable, helping to transfer sweat off the rider and keeping the body cooler and drier. Not a major consideration in Scotland in April, maybe, but well worth bearing in mind in the tropical south! 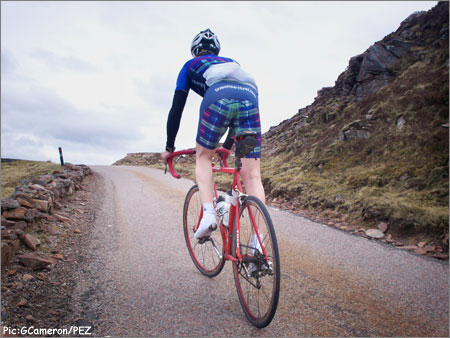 In the bad old days, you could be sure of two things with repeated wash ‘n’ wear of your shorts: firstly, that they’d eventually become as shapeless as a gone-to-seed sit-com fall guy; and, secondly, that the leg grippers would make like a knackered spider in woolly mitts in a bath. 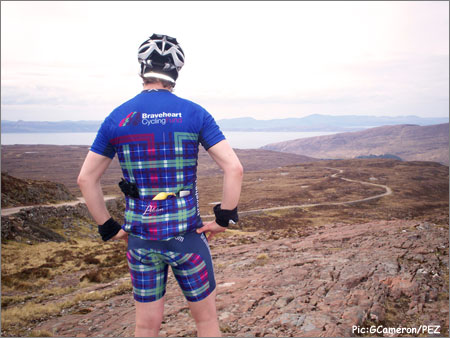 These problems should be a thing of the past because the elastane yarns and meshing structures offer stability of shape – repeated use has seen no problems so far. 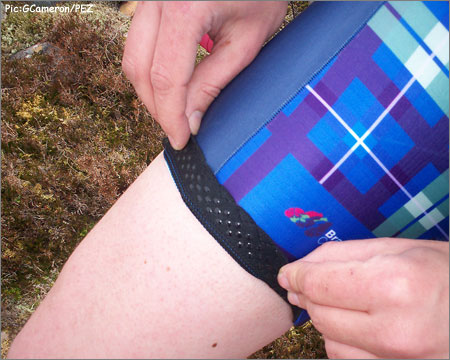 The silicon leg grippers are more subtle than with some other retailers – three lines of slightly raised dimples ensuring the shorts cling to your skin like a 1971 groupie to Led Zeppelin, but without leaving your thighs looking like you’ve been riding around with a rubber band cutting your circulation off! 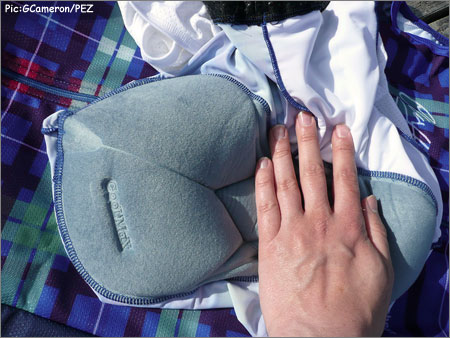 What about the buffer between ‘seat’ and saddle? The seamless CoolMax insert has built-in antibacterial properties, which remain intact even after repeated washing, and also left me feeling rather comfy after a longish hit out on the road. The high density foam used is 8mm thick meaning I was always confident that I’d get back home in the same shape I’d left in!

As expected, the bibs themselves are mesh, helping to make you feel a little cooler down the back.

Short Sleeve Jersey
As with the shorts, this is the very same stuff that all of the teams supplied by Impsport pull on. If it gets used on the World Cup track circuit or in the UK Premier Series, then I’m happy that it’s going to suit me and just about anyone else. 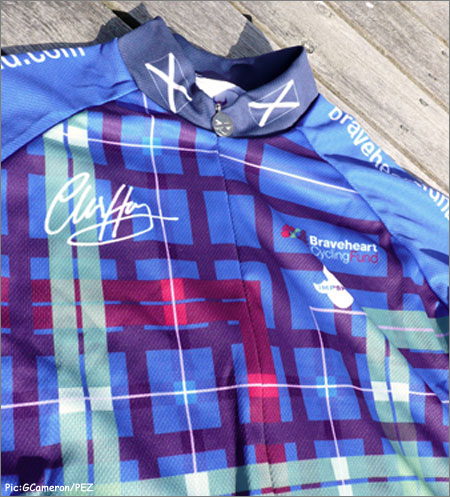 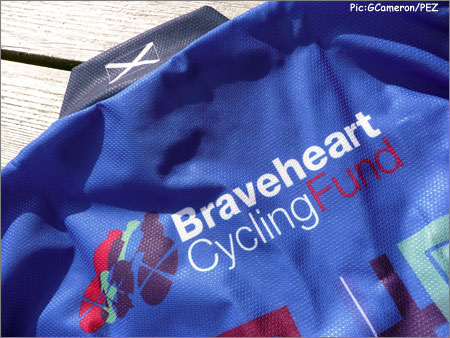 To paraphrase Jennifer Aniston, this is the ‘science bit’on the jersey! “Sportnit is a double face knitwear where different CoolMax yarns produce contrasting inner and outer surfaces and thus optimise the transport of excessive moisture away from the skin”. More simply, it’s 100% polyester, very light, breathable and helps to keep you drier as the material helps the sweat away from the body.

On Scotland’s (honestly) rather mild west coast, riding conditions can get a bit muggy and this jersey did seem to do the trick in that I didn’t feel too claustrophobic. 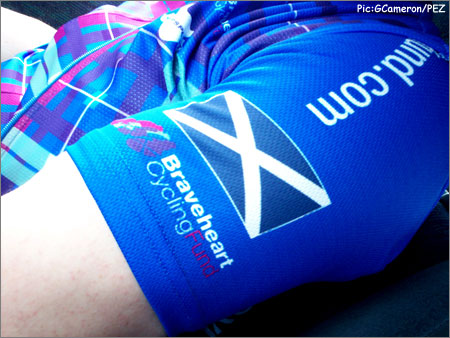 The 3/4 length zip is concealed so as not to distort any pattern, helping to reduce unseemly bulges across any sponsor’s logo. Round the bottom of the jersey, I didn’t have any difficulties with it riding up and exposing my lower back to the elements, which is a major consideration. 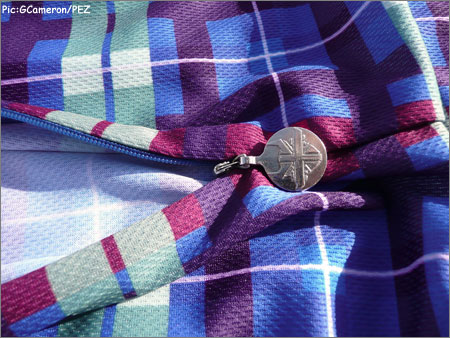 The puller, embossed with the manufacturer’s logo, is an ideal size and shape for grabbing to unzip when climbing – yup, even in Scotland, the hills get you warm enough for this! And of course, with cold hands or big gloves on, I don’t really want to be fiddling around looking for a zip puller before starting the descent. 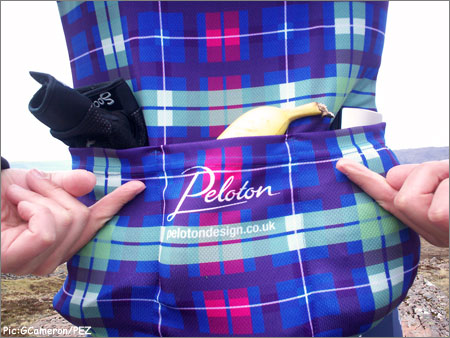 All in all, another good piece of kit.

Gillet
I have to admit to being a bit of a wannabe when it comes to kit – if the kit is cool and there’s replica gillets, overshoes, caps, sandals, shower caps, boxer shorts, condom holder, etc, to be had, then I’ll more than likely spend the cash.

Just as well the Braveheart range is beefed out with a showerproof, windproof sleeveless rain jacket. 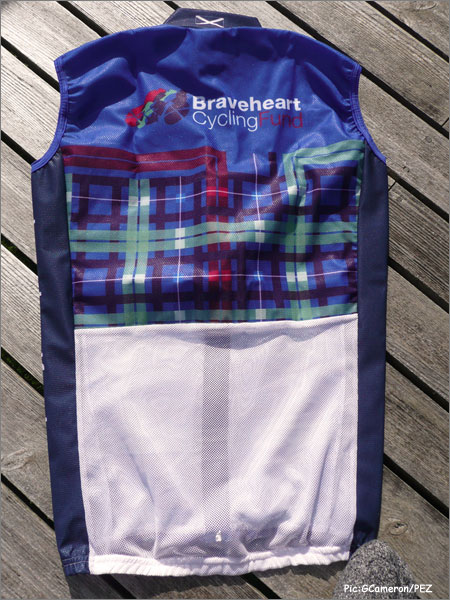 Retaining the same design as the jersey and shorts, it sports a full-length zip, with the same puller as the short sleeve jersey. The outer Dry Storm fabric, recently upgraded, rebuffs the elements as effectively as an A-lister’s security posse fends off a nerdy autograph hunter, while the inner Polyurethane membrane helps draw the moisture away from the wearer.

Barrelling off the top of Scotland’s highest road pass at over 2000 feet, the windproof material did its stuff very nicely for the middle of April, so it should see any rider through cooler spring and autumn rides pretty comfortably.

The bottom half of the back is mesh for keeping cool, and the whole thing folds, or crumples, depending on your ride situation, very neatly into a rear pocket.

There’s triple stitching around the arm holes, giving a neat, strong finish and a nice fit around arms. Crucially, it didn’t cut in when I stretched out on the flat or got aero on a descent.

The collar manages to come down on the comfy side of restrictive fending off the wind and drafts.

Overall
…very good stuff and if the tartan isn’t your cup of tea …. just think of the good cause!

Impsport have now clinched a deal to supply all of the leaders’ jerseys for the Tour of Britain, which is a major coup considering the previous suppliers were a firm very closely associated with Big Tex’s glory years. Did you hear a ‘swooshing’noise there? 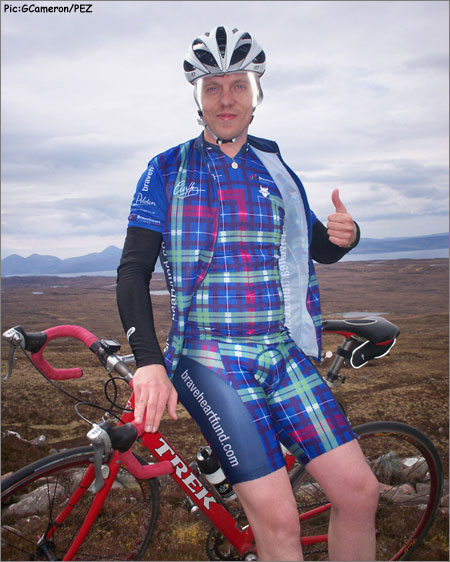 Maybe a Braveheart Fund rider, such as previous Pez interviewee Evan Oliphant, might make the jump from one Impsport garment to another come September? If he does, at least he knows that the fit will be a good one. 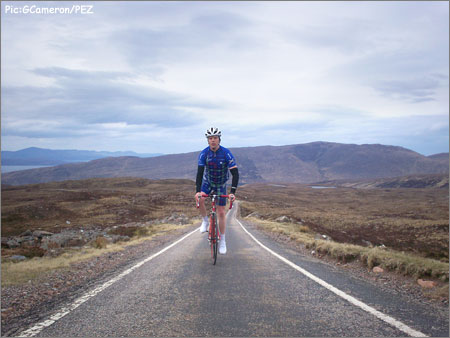 Thanks to Dan Ellmore at Impsport for supplying the kit, and also to Giro for the very cool Ionos helmet.

• For more on the kit go to: Impsport.com.

• Check out the Braveheart Cycling Fund.

• Read the PEZ review of the Giro Ionos helmet.

The 1990 Giro With Frankie Andreu