Winter riding is almost upon us – except for you lucky Aussies – and that means less riding outdoors. But with an indoor trainer and a Netflix subscription, winter fitness can continue in relative comfort. The one missing feature of many riders’ indoor training is power measurement. Now the guys at Kurt Kinetic offer a clever little computer that calculates your power, and is priced under $200…

Kurt has released two second generation power computers in both wireless and wired versions which seem to satisfy the essential bike computer needs while providing useful wattage numbers on an indoor trainer. This is a nice evolution from the original models which just did not track things like heart rate and cadence. 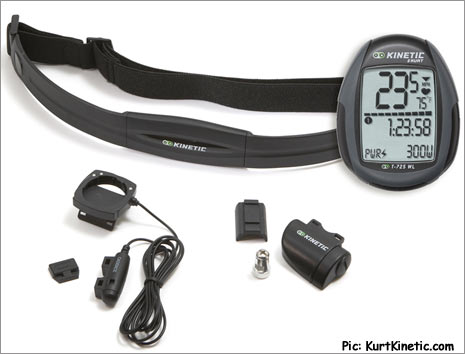 According to the Kurt Kinetic website: “The Kinetic Wireless Power Computer is designed to give you accurate power (watt) readings when you are using a Kinetic Trainer. All other functions (speed, distance, cadence, calorie burn, altimeter, etc) are accurate both on and off the trainer.” You gotta love marketing copy that tells it like it is, and this one works well to measure power on your trainer, but is not intended for power measurement on the road.

The Kinetic power computer comes right out of the box ready to calculate power on their own Road Machine trainer. Although it contains no actual strain gauges, it calculates power based on the known resistance of their Road Machine fluid resistance trainer versus the rear wheel speed. To note, it doesn’t work with magnetic or electronic trainers because the resistance is not constant. Kurt has a chart of the various “A” and “B” values that must be used for other trainers here https://www.kurtkinetic.com/calibration_chart.php.

The first generation power computer was a phenomenal concept that was inexpensive and reasonably well executed. The computer was no different from a base model Cateye or Sigma wired computer, and it didn’t even have a features for second bike setting, heart rate or cadence. When not on the trainer it was pretty useless as a training tool. It also had a pretty dated appearance, which was fine in the privacy of your own basement, but would invite fear of ridicule on the group ride.

It Does More Stuff
The new Kurt computer in its wireless iteration nicely addresses the previous lack of features by adding an altimeter, percent grade, altitude gain/loss, heart rate limits, calorie expenditure, temperature, distance countdown, and a service interval reminder. I say these improvements warrant the price tag of $184.99 for the wireless version. The new wired computer drops the heart rate and altitude features for an even more budget friendly investment of only $79.99. 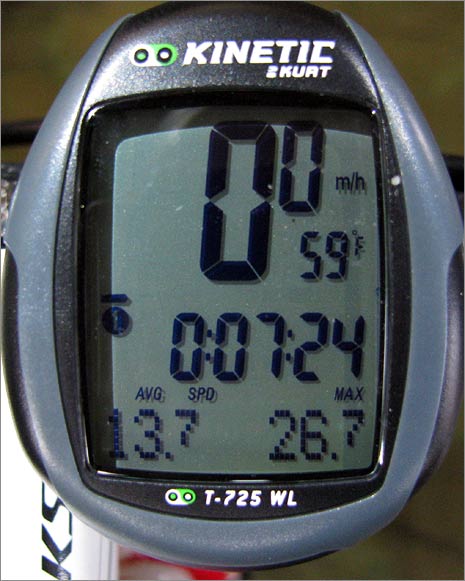 Out Of The Box
My initial impressions of the new power computer were favorable as soon as I opened the box. First – the owner’s manual is actually a stapled book instead of a hard to read sheet of paper. The second thing I noticed was the stem/handlebar mount. The first generation computer was only compatible with 25.4 and 26.0 bars, (do those even exist anymore?) where as the second generation has a very compatible zip tie mount which matches the curvature of the very popular 31.8 clamp diameter. 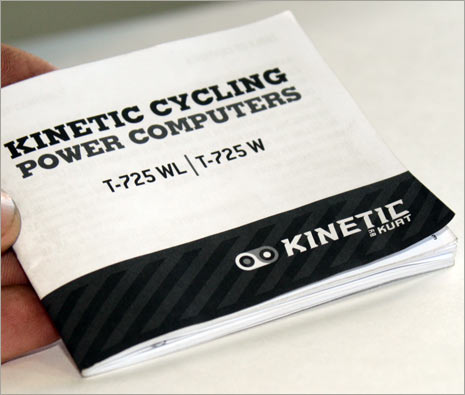 Kurt steps up with a ‘real’ manual.

Installation was a breeze, if you can install and setup a cadence computer then there should be no issues here, getting telemetry between the wireless speed sensor and the head unit could not have been easier. 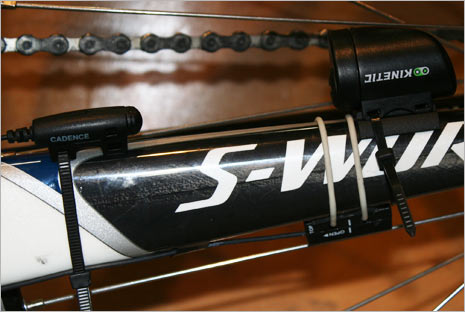 The wireless speed sensor and wired cadence sensor seems to be much lower profile and more durable than the older model’s single wired speed sensor, which always seemed flimsy to me. 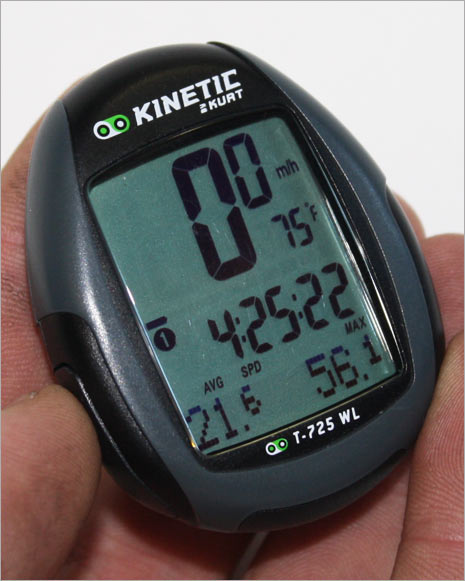 The buttons on the Kurt Kinetic power computer are intuitive and easy to use, and all of the buttons have a positive feel and sound to them with an audible “click.” The organization of the buttons once again is well thought out with the select button located on the left, the mode on the right, and the plus and minus buttons located below the screen. The size and location of the buttons allow even the most ham-handed of us to easily navigate through the functions on this computer.

Kurt Vs SRM
Testing the Kurt’s power measurement seemed like a good idea, so we mounted it alongside an SRM power meter for a reliable baseline power measurement. We hooked up both the older wired and newer wireless second generation Kurt Kinetic power computers and although the new computer has a wireless speed sensor, there appeared to be no additional lag time in transmitting speed and power to the head unit. We attributed this to the faster calculating speed of the new computer. 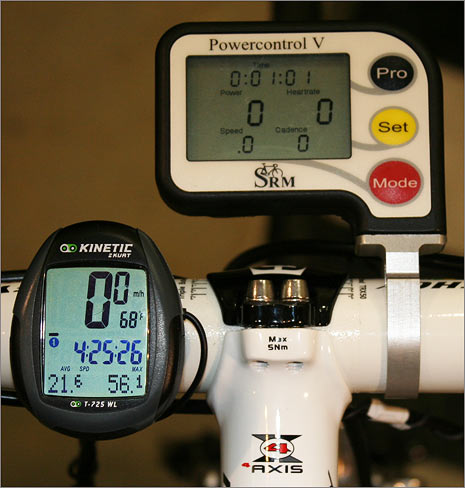 Power accuracy for the wireless unit seems to be good compared to the SRM albeit slightly on the low side of things. We also noticed that because of the lack of strain gauges there was no spike in power right before an interval as there was on the SRM, this does not affect the trainability of the data, it should just be kept in mind when comparing power numbers with a more traditional power meter. More importantly, the wireless unit was quite consistent when compared to the SRM, where the older wired unit seemed to produce a wider range of reported watts above and below the SRM.

On The Road
Out on the road our second generation Kinetic computer performed flawlessly, speed, cadence and heart rate were as accurate as any other computer with these features, in this case an SRM. The altimeter functioned as it should, and although not the most useful data when it comes to training, it was very fun to play “guess the percent grade” with our riding buddies.

It was interesting to switch to the power view while out on the road, the lack of strain gauges provided for some very entertaining numbers which fluctuated with our speed, so while climbing a hill at around 400 watts, the Kinetic power computer was reading right around 50 watts. So the wattage function should be saved for your trainer sessions since the road sessions were both inaccurate and inconsistent (in fairness, Kurt doesn’t sell the computer for this use but we figured someone would ask).

But given cadence, heart rate and distance on the screen at the same time, a rider is not deprived of useful metrics. The adjustable scroll allows you to adjust what data is displayed. And the well written manual actually shows you how to use the unit. Often a lost art, Kurt gets high marks for clearly putting time and effort into their manual.

So What!
Our captive bike racer’s and ace mechanic’s final verdict on the new Kurt Kinetic wireless power computer is positive. As a training tool for the winter indoor months, the second generation computer seems to have taken all of the good aspects of the first generation unit and improved its consistency while adding some key features for both indoor and outdoor training. As far as the wired and wireless versions go, they both give you accurate data for training on the Kurt Kinetic Trainer with power inside. The wireless one will really shine outside on the road or in the woods where you can take advantage of the additional computer features. While not a substitute for a real power meter on the road, the well thought out manual, long list of features and reasonable price compared to its competitors make this easy purchase recommendation to any Kurt Kinetic owner.

• Get More info at KurtKinetic.com

• Where to Buy it: WiredBike.com
About the authors: Chris Antonovics is the wiredbike.com tech-guru and has had extensive experience both setting up, troubleshooting, and testing most power meters on the market today. Eric Fletcher, our tester, is a seasoned racer of all disciplines and a connoisseur of finer bicycles who loves training with power and has used power meters extensively for many years.